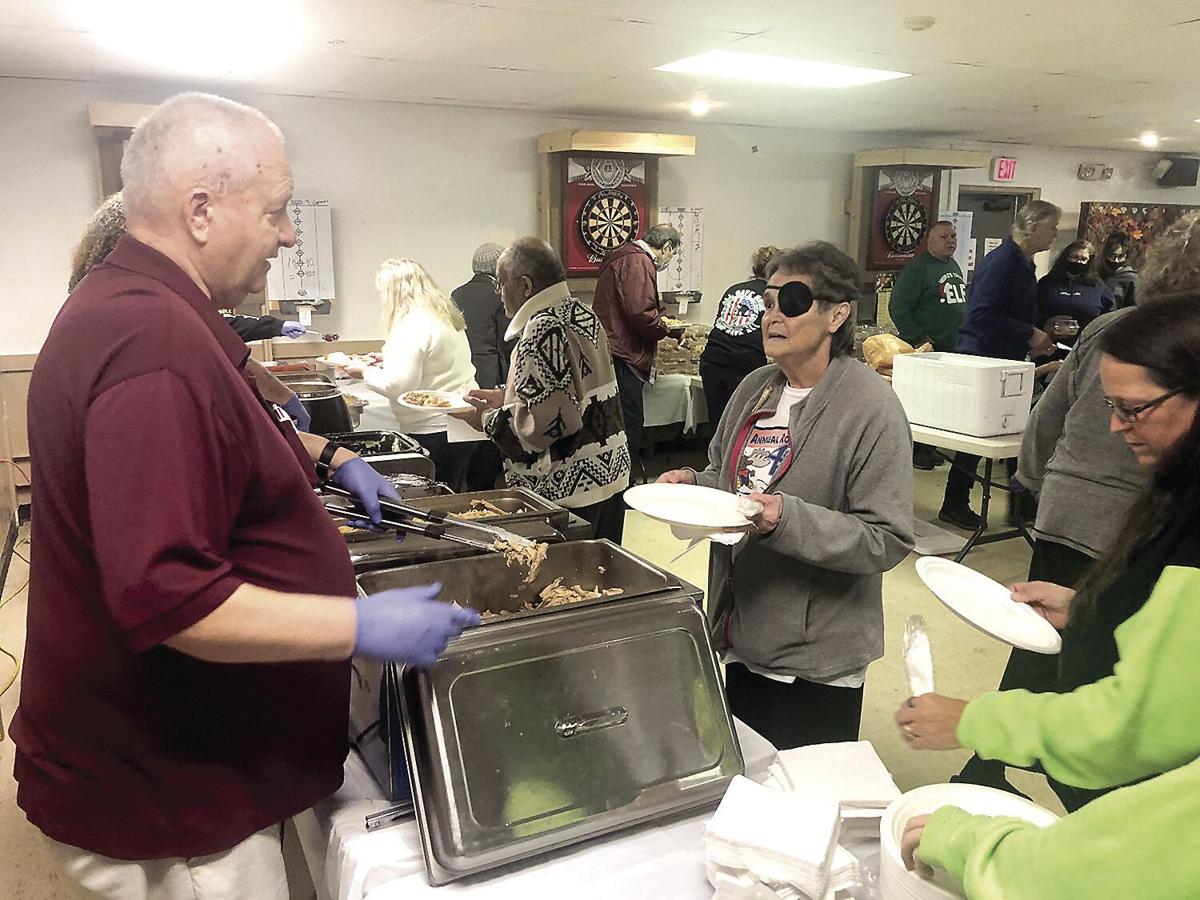 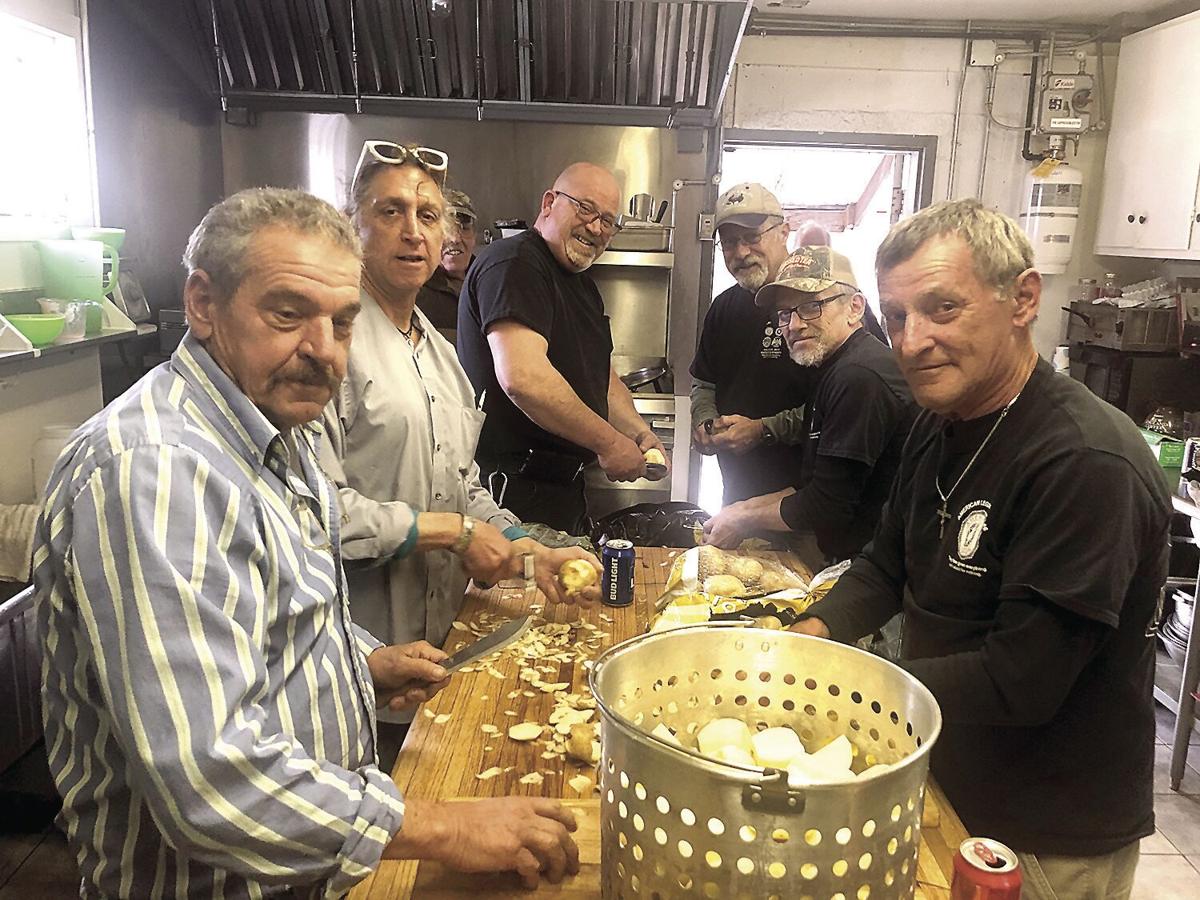 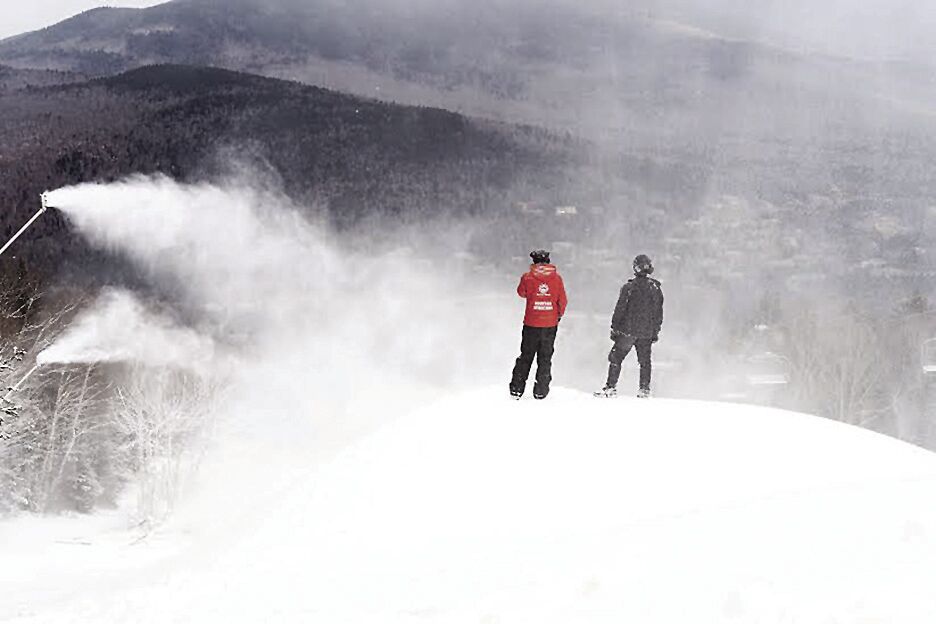 Bretton Woods Ski Resort opened for the season Friday, Nov. 26 with four trails and two lifts after being able to make snow (above) earlier in the week. (COURTESY PHOTO)

Bretton Woods Ski Resort opened for the season Friday, Nov. 26 with four trails and two lifts after being able to make snow (above) earlier in the week. (COURTESY PHOTO)

I spoke with Laura Lemieux, marketing and events coordinator at Settlers Green, and she said the parking lot was packed when she came to work on Black Friday so it looks like a busy one.

We hope that everyone has recovered from being totally as stuffed as their oven-roasted turkeys.

I stopped by American Legion Post 46 on Tasker Hill Road in Conway at noon Thursday to see the team of volunteers preparing to serve their annual free community dinner to hungry (and appreciative) patrons.

I went there to take photos only, as I had already gotten my turkey feast to go from Jen Kovach and Kevin Flynn’s Max’s Restaurant at the Snowvillage Inn the night before.

But, I ended up saving that for this weekend because face it: once you smell that captivating scent of turkey, mashed potatoes, gravy, butternut squash and pumpkin and rhubarb pie, you’re a goner and I could not resist grabbing a dinner to go at the legion as well after getting in line and making a donation.

After all, we all know that you can never have enough turkey, right? Turkey all weekend, I say!

Helping in the kitchen when I got there at noon were Bill Hill, William Blatus, Dan MacLeod, Post 46 Commander Phil Vasington, Joe Evens and past commander John Kiesman, while those helping to dish out the fantastic feast out at serving station were former Sheriff Roy Larson, Bob and Darlene Ferrence, Wayne and Cindy Barchand and Robin Haberbosch.

Meanwhile, Lee Hoffman, Kerri Chute, Deb Taylor and other members of the Legion Auxiliary helped to coordinate the delivery of meals and pickups, assisted by David Reardon and his fellow members of nearby St. Margaret’s of Scotland.

I am sure I am leaving many names out, but that’s just a few of the many helping hands I encountered in my brief time there.

In the kitchen, I asked for an account of how much food it takes to prepare the 400 meals and this is the report Dan MacLeod gave me: 40 pounds of turkey, 350 pounds of potatoes, 40 pounds of corn, 50 pounds of carrots and 150 pounds of butternut squash.

Commander Phil told me when I followed up on Friday that they delivered or had available for pickup about 150 turkeys. Last year, the Legion did about 350 dinners compared to this year’s total of 400.

All told, there were about 25 volunteers involved – including Legion members, Sons of the American Legion, the Auxiliary and the St. Margaret’s helpers, along with a Legion couple from Georgia who were in the valley to visit their daughter and another Legionnaire couple from Massachusetts who were in town for the holiday weekend.

It carried on a Post 46 Thanksgiving meal tradition that goes back to at least 1980, Phil said.

And now, with Thanksgiving behind us, the spruced up Legion (they installed new paving earlier in the month out front) is selling 100 Christmas trees for $50 apiece along with wreaths.

Music continues at Post 46 with Ricky and the Giants 3-6 p.m. tonight and on Dec. 3 Torque performs, 6 p.m. to closing time and the Simon Crawford Band performs Dec. 10 (which is also the night of the Legion’s famous Fish Fry 4-6 p.m. served up by Sons of the American Legion’s Rick Breton and crew).

TRADITIONALLY YOURS, Jackson: Taking center stage today to help kick off the local holiday season is Jackson’s arrival of Santa Claus at 4:30 p.m. at the gazebo, followed tomorrow by the tree lighting Sunday, also at 4:30 p.m. with caroling led by the De Capo Choir. the Christmas Farm Inn and Spa will have some treats at the gazebo Sunday for all to enjoy. Masks are preferred. For further information, go to jacksonnh.com or call (978) 580-0905.

A LOOK AT THE Sun’s ads shows there are tons of other holiday events this weekend. Among them are the Christmas Craft Fair in Tamworth Village today at the Tamworth Towne House from 10 a.m.-2 p.m.; the MWV Arts Association’s Small Business Saturday at its Main Street Gallery at the Shops at Norcross Circle; and Carroll County Retired Senior Volunteer Program’s the sixth annual Festival of the Trees being held at Settlers Green, Nov. 26-Dec. 4, next to the Lindt Chocolate Shop at 2 Common Court, Unit A14. (.nhfestivaloftrees.com/).

TUCKERMAN BREWING COMPANY today is featuring its Local Artisan Fair and Tree Lighting from noon-7 p.m. The artisan fair is 12-4 p.m.; live outdoor music with Chimera is from 1-4 p.m.; and the tree lighting with Santa is at 4 p.m.

SNOWGUNS GOING: Following Sunday River’s lead last week, Bretton Woods opened its ski season on Nov. 26 with skiing and riding on four trails serviced by the Bretton Woods Skyway Gondola and Zephyr High-speed Quad. This terrain is recommended for intermediate levels and above. For more, go to brettonwoods.com or call (603) 278.-320.

According to Ski NH, Cranmore plans to open Dec. 3 and King Pine Dec. 17; and Black Mountain is also looking at early December so stay tuned.

BEAR NOTCH OPEN HOUSE: The Garlands are hosting their 27th annual open house at Bear Notch Ski Touring and Snowshoe Center today and tomorrow, 10 a.m.-4 p.m. They encourage pass holders to call (603) 374-2277 to reserve their passes, due to continued COVID concerns for processing. They also invite everyone tot take a nice walk on their trails when looking at discounted equipment. For more go to bearnotchskitouring.com.

IN MUSIC HIGHLIGHTS, aren’t all of we Beatles fans loving Peter Jackson’s extraordinary three-part documentary film, “Get Back,” being streamed on Disney +, Nov. 25-27? It’s an amazing addition to our knowledge of the Fab Four's final year together.

In local tune news, I’m told by Blues Summit host Roy “the Skiing Dj” Prescott that John Lackard joined by local drummer Alan Phenix put on a wonderful show at the latest Blue Sunday at the Red Parka last Sunday, Nov. 21. The Riley Parkhurst Project is there tonight. Next up in the Blue Sunday series is Erin Harpe and the Delta Swingers Dec. 5. Go to redparkapub.com or call (603) 383-4490 for more.

COMMUNITY SKI SHOWCASE: Co-organizer Betty Newton reminds us that the “Showcase Event” as the finale for the New England Ski Museum’s "in Martha's Memory" field trips Nov.1-3 for the SAU 9 4th and 5th graders is being held as an open house event 4-7 pm, Nov. 30 at the New England Ski Museum and the North Conway Community Center. The purpose of the event is for the students to share their projects with their families and the community. We hear from teachers that students are writing scripts and doing other projects about their experience of being part of the re-enactment of the Schneider family's February 1939 arrival. Makes you proud of our valley's history ad spirit of volunteerism.