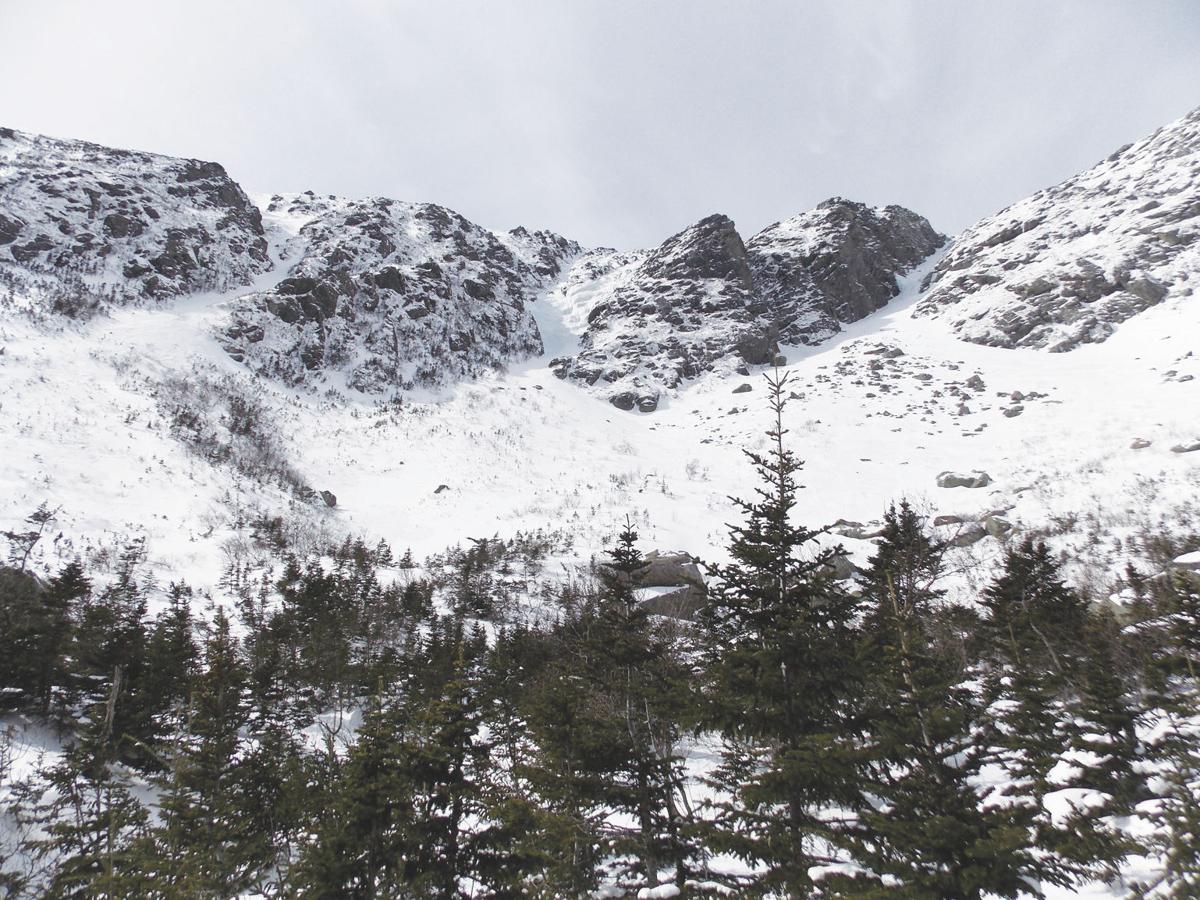 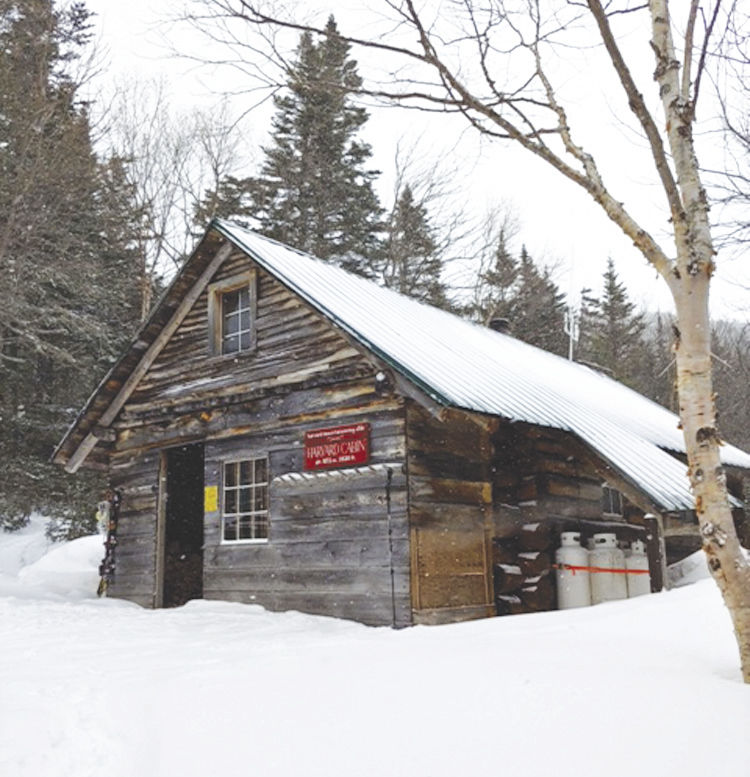 The Harvard Cabin is located on Route 16 near Pinkham Notch, and offers easy access to lots of trails, downhill skiing, cross-country skiing and rock and ice climbing. (CHRISTOPHER WU PHOTO)

Many hikes are so popular they are part of a standard White Mountain repertoire, like Mount Willard or Mount Chocorua. Others are much less talked about yet can be very rewarding, like a winter hike up to the base of Huntington Ravine.

It is fun to write about that hike this week, and to suggest it as an alternative to a traditional winter summit, yet with a unique and spectacular view.

Henry Thoreau once said that the view half way up Mount Monadnock toward the rocky summit was much better than the outward view from the top. This mountain is located is in southern New Hampshire, and Thoreau’s words may not be totally accurate about Mount Washington, but you get the drift. One could even say that the craggy view from the base of Huntington Ravine reveals the essence of Mount Washington.

I was heading north for a hike on a sunny and frigid morning this week, and changed my itinerary in mid-flight. I called my usual spotter, the Conway artist Bob Gordon, and told him I had changed my mind. I wasn’t going to climb Middle Sister on Mount Chocorua. Instead, I was going to hike up to the base of Huntington Ravine.

I was recovering from a mildly pulled muscle, and wanted a hike that was solidly packed down most of the way, so that I wouldn’t be lurching in deep snow. This time of year, a Forest Service snow ranger takes a snowmobile to the base of Huntington Ravine almost daily to check avalanche conditions.

Interestingly enough, a fond memory from many years ago had also come to mind and influenced me. I was working at the AMC Pinkham Notch Camp. One fall day, I hiked up the Tuckerman Ravine Trail with some other crew members, taking the Huntington Ravine Fire Road over to the base of Huntington Ravine.

Approaching the ravine on the narrow trail through stunted trees, we arrived at the base of the rocky scree slope called the “Fan,” and climbed up on a giant boulder, where we basked in the sun in the crisp air of autumn and gazed up at the steep craggy ravine.

An unearthly swishing sound soon emerged from the silence. None of us could figure out what it was, until someone finally looked straight up. Directly above us and nearly 1,000 feet above where we stood, three gliders were flying in a tight circle, catching the “Wave” — a wind phenomena that occurs over the mountain that time of year. It was a unique experience, somehow helping to prompt a return at a completely different time of year.

At Pinkham Notch, I didn’t sign in to the winter hiker logbook until 10:30 a.m., maybe a record late time for me. But I wasn’t climbing the mountain, only taking a leisurely hike up to one of Mount Washington’s spectacular ravines.

In 1.7 miles up the Tuck Trail, I turned right on the Huntington Ravine Fire Road, and followed the packed down road a little over a half mile to the right hand turn into the log Harvard Cabin.

At the turn was a comprehensive avalanche sign for Huntington Ravine with removable slats. This time, the rangers had inserted a moderate avalanche danger slat. Surprisingly, accidents have frequently occurred over the years when the danger is moderate. People can be less cautious, and also human caused avalanches can be triggered above others.

The Harvard Cabin is owned and operated by the Harvard Outing Club and has a special use permit from the forest service. It is another interesting place to pause on this winter hike. It is open from Dec. 1 to March 31. Built in 1963 when interest in ice climbing was beginning a slow rise, it is used mostly by those practicing this craft in the gullies of Huntington Ravine.

Yet, it is open to the public for overnight stays whether you ice climb or not. Up to 16 people can spend the night on a first come first serve basis. A propane stove, pots and cooking utensils serve those who bring their own food to cook. The cabin is heated by wood from 4 to 9 p.m. so outdoor clothing can be dried. Sleeping is on the warmer second floor.

I walked the short side path up to the door of the cabin and pulled the latch string, entering into the muted light of the cozy log cabin interior. I was immediately greeted by Harvard Cabin Caretaker Christopher Wu, who was preparing to head up to the base of the ravine.

After a very pleasant conversation in the shadowy interior, I prepared to leave. Wu reaffirmed that the cabin is open to wider public than ice climbers. It can be an overnight spot with those climbing the mountain on the winter Lion Head Trail, with back country skiers, and with wanderers. For information on the Harvard Cabin go to harvardoutingclub.org/our-cabin.

It felt different from the old days there in the 1960s when I first visited, when climbers seemed a tight lipped lot except with those who shared their passion. He said that one thing that has continued is the snow rangers stopping by the cabin on busy mornings to chat with climbers about conditions in Huntington Ravine.

I left, planning to stop there again on my way down for lunch. I continued up the Fire Road. The steep upper slope of Huntington Ravine itself soon becoming visible above, and the view of eastern side of the mountain over to Boott Spur suddenly opened up.

Finally, I reached a spot where the forest service snowmobile had stopped at an advantageous vista of the entire Huntington Ravine headwall. I continued on the well packed trail as it entered the thick stunted spruce.

In the winter, the snow choked base of the ravine is much different than the summer. It is possible to leave the trail soon on hard snow and climb directly upward onto the steepening slope as the trees thin, rather than hiking up the summer trail through grotto after grotto.

I climbed up the incline a few hundred feet and took in the view of the great ravine above. It was too chilly to pause on one of the great boulders for lunch, yet the chill added to a delicious feeling of isolation.