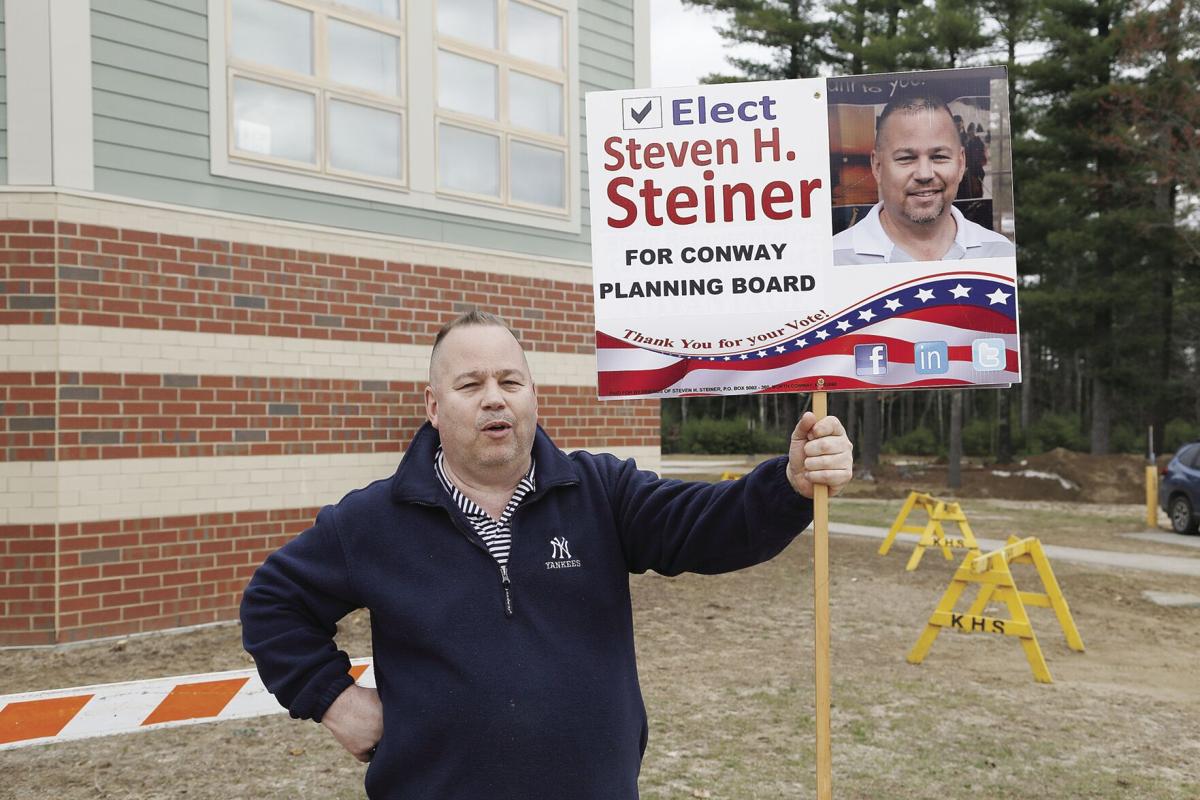 Steve Steiner is seen when he ran in April for Conway Planning Board. He was not elected. The local Realtor has been getting more involved with local politics lately. (RACHEL SHARPLES PHOTO) 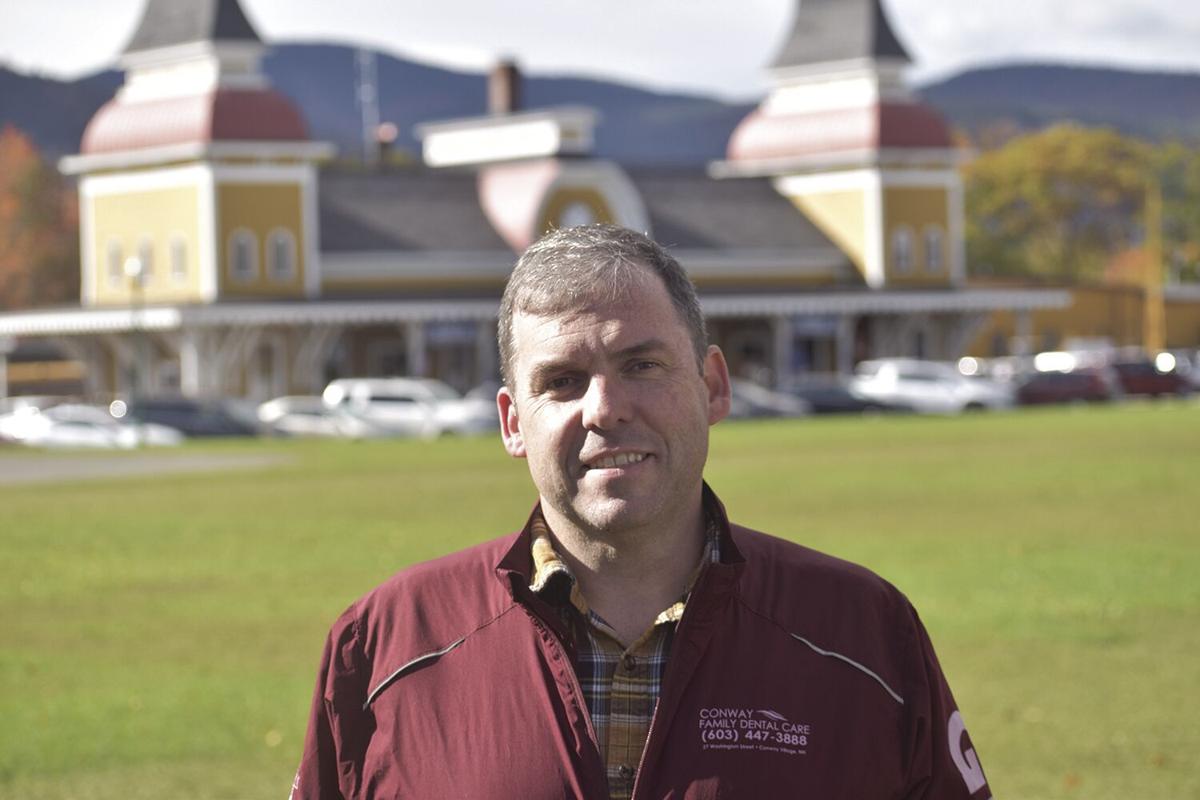 Tad Furtado is concerned about the future of the Republican Party. (DAYMOND STEER PHOTO)

Steve Steiner is seen when he ran in April for Conway Planning Board. He was not elected. The local Realtor has been getting more involved with local politics lately. (RACHEL SHARPLES PHOTO)

Tad Furtado is concerned about the future of the Republican Party. (DAYMOND STEER PHOTO)

CONWAY — A bid to remove the head of the Mount Washington Valley Republican Committee from office failed by a vote of its membership Monday night.

Local Realtor Steven Steiner, the broker/owner of Whitehill Estates & Homes, was named chairman of the committee on Feb. 15.

Steiner's rival for the chairmanship was Ray Gilmore of Bartlett.

Steiner took heat in August after attending a Conway School Board meeting where he vocally opposed mask mandates and suggested people give the middle finger to school officials trying to enforce a mask mandate. During his public comment, he held up his middle finger, a photo of which ended up on the front page of the Sun.

The Sun tried to attend Monday's meeting. Local Republican Tad Furtado said it was posted for full members only but that the chair could rule otherwise.

However, a reporter's call and email to Steiner on Monday afternoon to inquire about press coverage of the meeting was not returned until Tuesday morning.

Furtado said he made a written motion to have Steiner removed from office at the meeting of the committee at the Lobster Trap Restaurant in North Conway, but he said it failed overwhelmingly.

There were about 55 people there, he said, including some non-voting spouses. The vote was by ballot. It had a single question on it: "Do you want to retain Steven Steiner as a chairman?"

The outcome, he said, was about 34 against and eight or so for the question.

"It wasn't close," said Furtado, who called it an "open and fair" process. Steiner stepped aside for the proceedings and committee member Mike DiGregorio ran discussion and both sides were able to make their case. Furtado said DiGregorio did a "great job."

Had the motion to remove Steiner passed, Steiner would have been replaced by John Hartman of Eaton, who is the first vice chair.

Furtado said he was concerned about the the direction being taken by the party both locally and across the country.

While the left seeks mask and vaccine mandates that Furtado opposes, he said some elements of the Republican Party seek to force anti-mask and anti-vax mandates on businesses because that is also expanding "the scope and power" of government.

"So this is a primary concern. If you are a small-government, less-regulation conservative, how can you justify and defend the state coming in and saying to a business owner, you have to do this?" said Furtado. "It's counter to our core philosophy."

Many new people in the party don't share the same concerns, he said.

"It's great, there's a lot of new energy, a lot of new votes, a lot of new people, but you still have to hang together with some sort of common philosophy and ideology," said Furtado.

"And if, the new people are pushing ideas that are so directly opposite to some of our core philosophies, how do we manage that?"

Furtado doesn’t believe he will be expelled by the MWV Republican Committee over the conflict. He said the bylaws call for a process that is like a “mini trial.”

He has no desire to leave the Republican Party as it is historically described.

“I’ll fight to keep it that way,” said Furtado, adding that the recent defection by state Rep. William Marsh to the Democrats makes the situation in the party worse.

“Him leaving the party means what’s left of the Republican Party is even more concentrated with the views that he opposes, because he walked away from it. If he had stayed and fought for his views, regardless of how frustrating that is, at least he’s still an element of the party,” Furtado said.

As for the middle finger, Furtado said it was “disappointing and discouraging.”

Furtado, 50, has been a Republican his entire life and has worked as a paid professional, including working for former U.S. Rep. Charlie Bass (R-NH) and former U.S. Sen. Paul Coverdell (R-Ga.). Right now, Furtado is a business manager at Conway Family Dental and is involved with other businesses.

Steiner, reached Tuesday, said he had no comment about Monday. He said Gen. Don Bolduc will be at the next meeting of the MWV Republican Committee on Nov. 15 at the Lobster Trap (new location Harley Jack's in Ossipee). Bolduc is running for U.S. Senate against incumbent Sen. Maggie Hassan. Steiner said dinner starts at 5:30 p.m. and the meeting starts at 6:30 p.m.

“She is going to lose because Americans have had enough problems with what’s going on in the country with inflation and all,” said Steiner. “Our gas and food prices are going through the roof.”

The Sun on Tuesday morning called prominent Republicans to get their reaction to the meeting and the results.

“In accordance with the local committee’s bylaws, a recall action of a committee officer was acted upon last evening,” said McCarthy in a written statement.

“It is my opinion that the majority of the membership, although originally upset and displeased, believed a valuable lesson had been learned and ultimately decided, although a solicitous admonishment may be warranted, recall was not.”

McCarthy pushed back against Furtado’s assertion that former President Donald Trump did not follow the tenets of conservatism which Furtado listed as smaller government, individual liberty, free markets, economic opportunity for all and the Constitution.

“All I can say is, he must have been a Rip Van Winkle during the entire four years of the Trump presidency,” said McCarthy. “It cannot be denied: President Trump advanced each of the five tenets he states concern for more than any other president, since the country was founded.”

Umberger, who is now Conway’s lone Republican representative in the state Legislature, said: “Steve is still the chairman, and I’m happy about it.”

Umberger told the Sun she thinks that overall Steiner is doing a good job.

“I think he works very hard and has done a lot to bring new members in,” said Umberger. “Those are very positive things.”

Gilmore said he never received a notification of the meeting as required by the bylaws.

“Tad is much more polite than he should be about this, and I commend him for that,” said Gilmore about Furtado’s written statement.

“Sadly, the MWV Republican Committee has been hijacked and turned into a Trump fan club, and that is something that I will never support or condone.”

Former speaker of the House Gene Chandler said he didn’t attend Monday’s meeting and was uninvolved.

Carl Thibodeau, a Conway selectman, said he had no comment Tuesday.