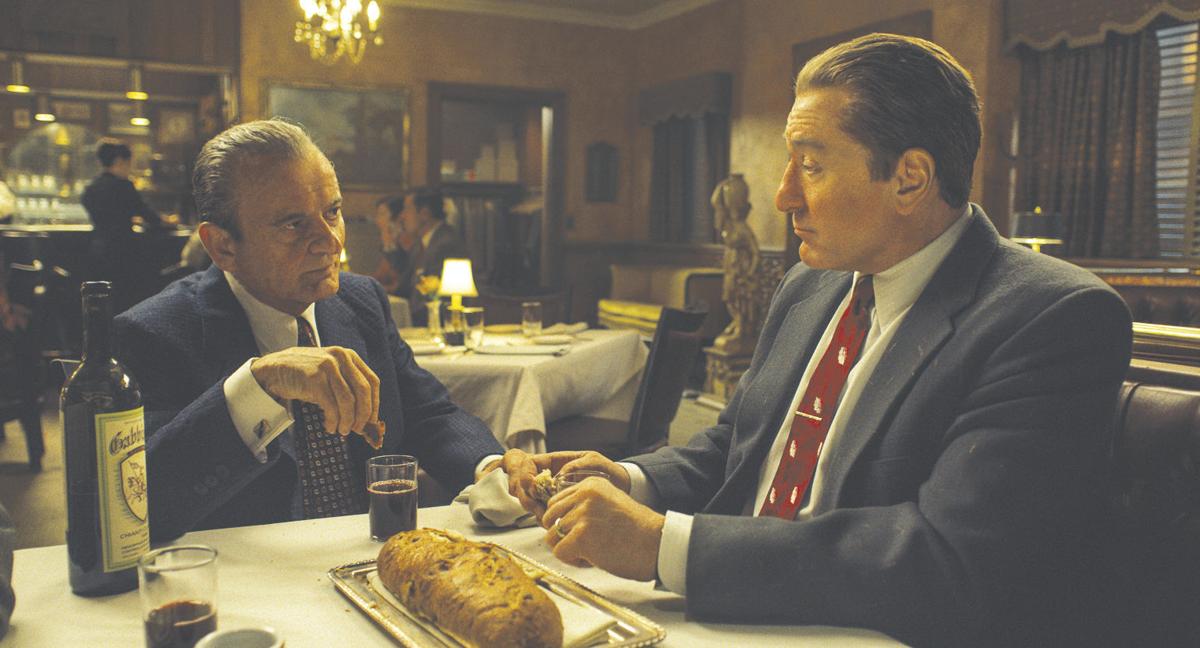 Joe Pesci (left) and Robert De Niro were digitally de-aged to play younger versions of themselves in Martin Scorsese's "The Irishman." (COURTESY OF NETFLIX) 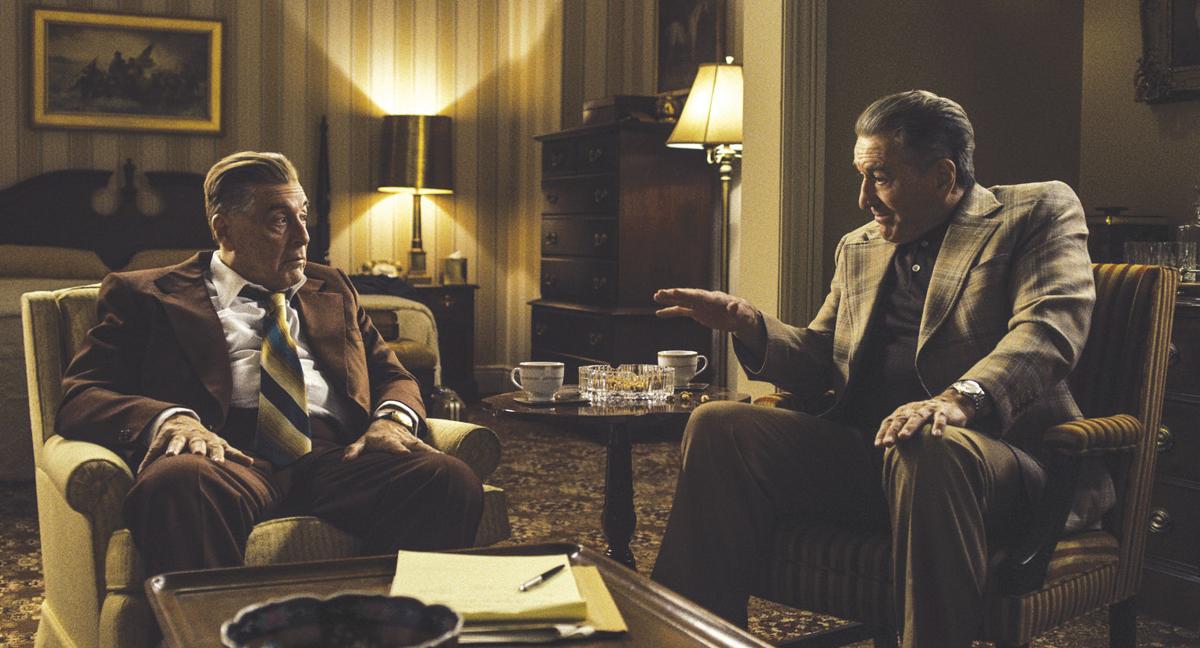 I know it is blasphemous to say, but Martin Scorsese’s latest film “The Irishman,” his gangster movie reunion with Robert DeNiro and Joe Pesci and his first collaboration with Al Pacino, is not a masterpiece. Heck, it wasn’t even the best “Scorsese” film of the year.

Scorsese’s influence was felt in a few high-profile films in 2019, most-notably “Joker,” which blended the tone and style of Scorsese’s “Taxi Driver” and “The King of Comedy,” but also “Hustlers,” a “Goodfellas”-esque look into a group of strippers who scammed deep-pocketed Wall Streeters, and “The Kitchen,” a 1978-set crime film that desperately wanted to be a female spin on Scorsese’s gangster formula.

While “The Kitchen” doesn’t quite work, “Joker” and “Hustlers” both do a better job of using Scorese’s toolbox than the 77-year-old filmmaker did on his own film.

“The Irishman” is by no means a turkey, but clocking in at nearly three and a half hours, it is a slog to sit through. I don’t have anything against long films. I saw both Quentin Tarantino’s “Once Upon a Time in Hollywood” (which clocks in at two hours and 45 minutes) and “Avengers: Endgame” (which clocks in at three hours) twice in theaters and count them among my favorite films of 2019.

But the runtime of “The Irishman,” which chronicles the life of trucker-turned-union enforcer Frank Sheeran (Robert DeNiro), who the film claims killed famed teamsters union leader Jimmy Hoffa (Al Pacino), is Scorsese at his most self-indulgent.

There are several uses of slow motion that add nothing but extra minutes to the film, including an excruciating extreme slow-mo shot of a wedding procession. Scorsese has been talking a lot about what qualifies a film as true cinema or art. Apparently, it is slow-mo shots of fat, sweaty Italians.

That’s perhaps a bit harsh, but it is these gratuitous shots that mar the film from greatness. It is the same issue I ran into with Scorsese’s three-hour-long “The Wolf of Wall Street.” Both films have repetitive imagery that belabor the point each film is trying to make. Eventually, it simply becomes tedious and redundant. Thirty to 45 minutes of footage could have been cut from each film and resulted in tighter, more focused pictures.

The other issue is Scorsese isn’t really stretching with “The Irishman.” This is his fourth gangster film (fifth if you consider the crooks on Wall Street to be gangsters), following “Goodfellas, “Casino” and “The Departed.” With the exception of “The Departed,” which was a remake of the Chinese film “Infernal Affairs,” each film, including “Wolf of Wall Street,” follows a formula: a narrator takes us through their rise and fall within the world of crime.

While the tone of “The Irishman” is more pensive, we aren’t really offered any new insights into the minds of career criminals other than they may feel some regret and turn to God in their final moments.

The structure is somewhat tweaked in “The Irishman” with DeNiro’s Sheeran being introduced in a retirement home before flashbacking to late middle-age before going back again to when Sheeran was in his 30s. The film bounces between the younger and middle-aged versions of Sheeran before the two timelines catch up with each other.

Structurally, this works well, and it does allow for a vivid sense of place and time. The use of impressive de-aging technology allows DeNiro, Pesci and Pacino to nearly seamlessly play their characters at different ages.

Perhaps, the most frustrating aspect of “The Irishman” is the lack of a strong female character. That may seem like an odd request of the male-heavy gangster genre, but Scorsese’s gangster films have always had a prominent female role. “Goodfellas” had Lorraine Bracco, “Casino” had Sharon Stone, “The Departed” had Vera Farmiga and “Wolf of Wall Street” had Margot Robbie.

There wasn’t a lack of options for a strong female depiction in “The Irishman.” Sheeran’s daughter Peggy (played by Lucy Gallina and Anna Paquin) is shown throughout the film as having a stand-offish relationship with her father, but the character has maybe a handful of lines.

Peggy is less a character and more of a plot device to add shading to the male characters. Pesci’s Russell Bufalino doesn’t have kids of his own and wants a relationship with Peggy, but she knows it was Russell that pulled her father into a life of crime and wants nothing to do with him.

Pacino’s Hoffa’s own daughters are adults, so he takes a shine to the young Peggy, who reciprocates the affection because she doesn’t associate him with the violent behavior of Russell and her father.

On a level of character, this is interesting but we don’t truly understand Peggy’s thoughts on any of this. In fact, it is another one of Sheeran’s daughters (Marin Ireland) who has had even less screen time that has to explain how it was “hard” having him as a father.

Similarly, in the middle-aged section of the film, we are introduced to Pesci’s wife (Kathrine Narducci) as a nagging chainsmoker, but, in a flashback, Russell comes home in a blood-soaked shirt and she says she’ll clean it with no questions asked. That is an intriguing dynamic that is left unexplored.

Even with those issues and the excess, there is a lot that does work. The screenplay by Steven Zaillian is filled will amusing exchanges between the various heavies, including a debate over how late is too late and what kind of fish was picked up at a market.

As expected, the acting throughout is top-notch, particularly Pesci who has been in semi-retirement This is only his third film since 1998. Pesci downplays some of his more manic tendencies to give a surprisingly quiet, understated performance that balances menace with warmth. Ray Romano in a small role also makes a lasting impression.

“The Irishman” is a good-enough film, but the mystique associated with Scorsese will get it a pass from a lot of filmgoers nostalgic for “Goodfellas.” But despite being a third longer, “The Irishman” isn’t half the film “Goodfellas” was.