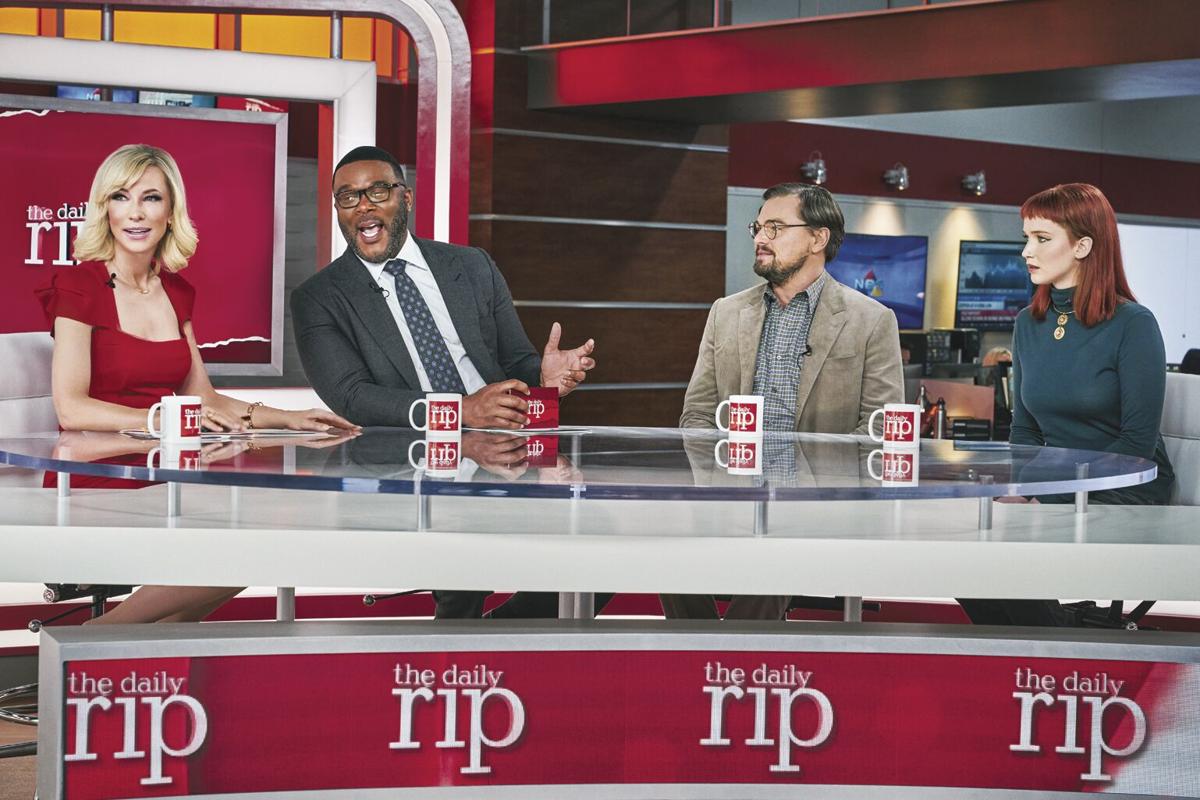 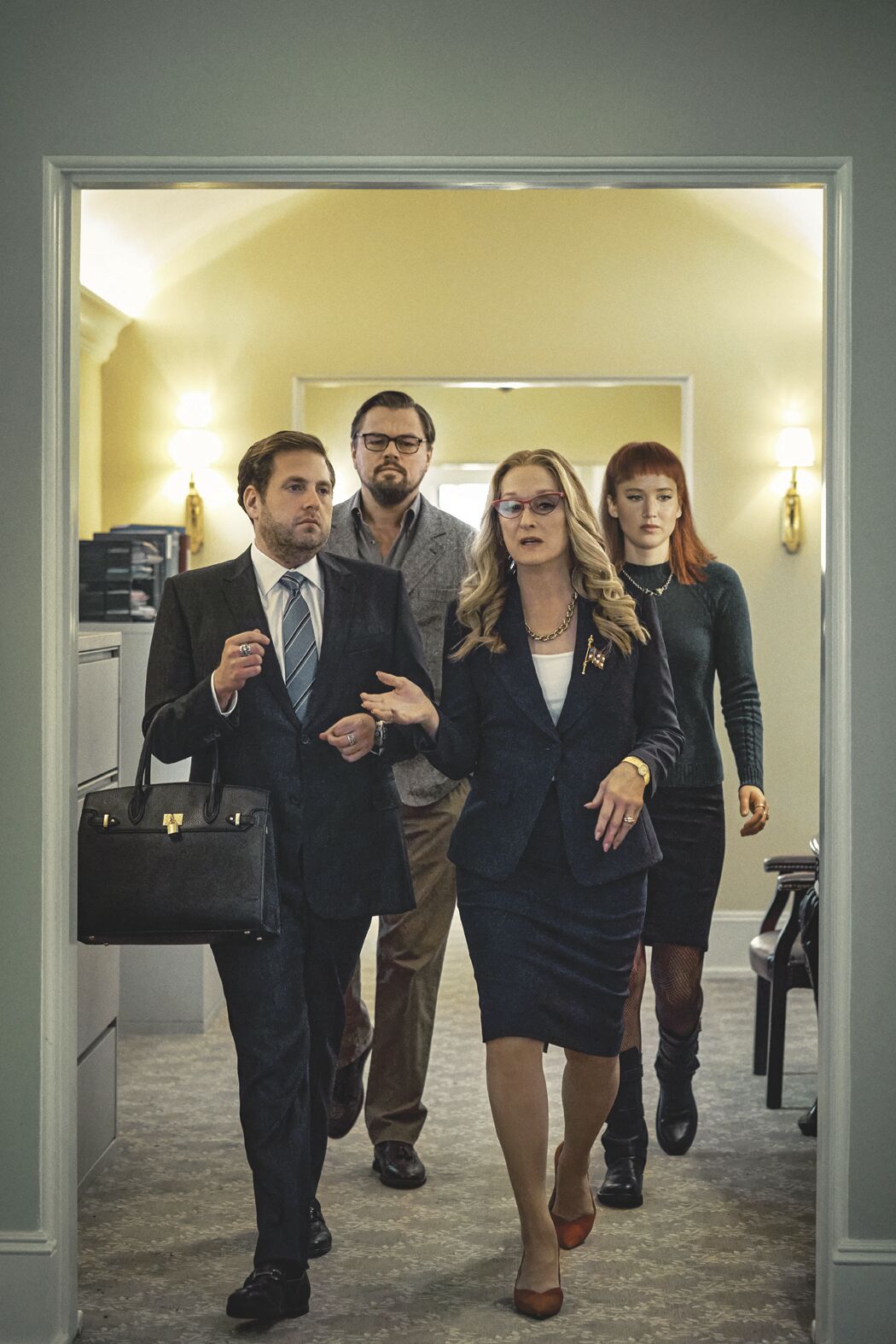 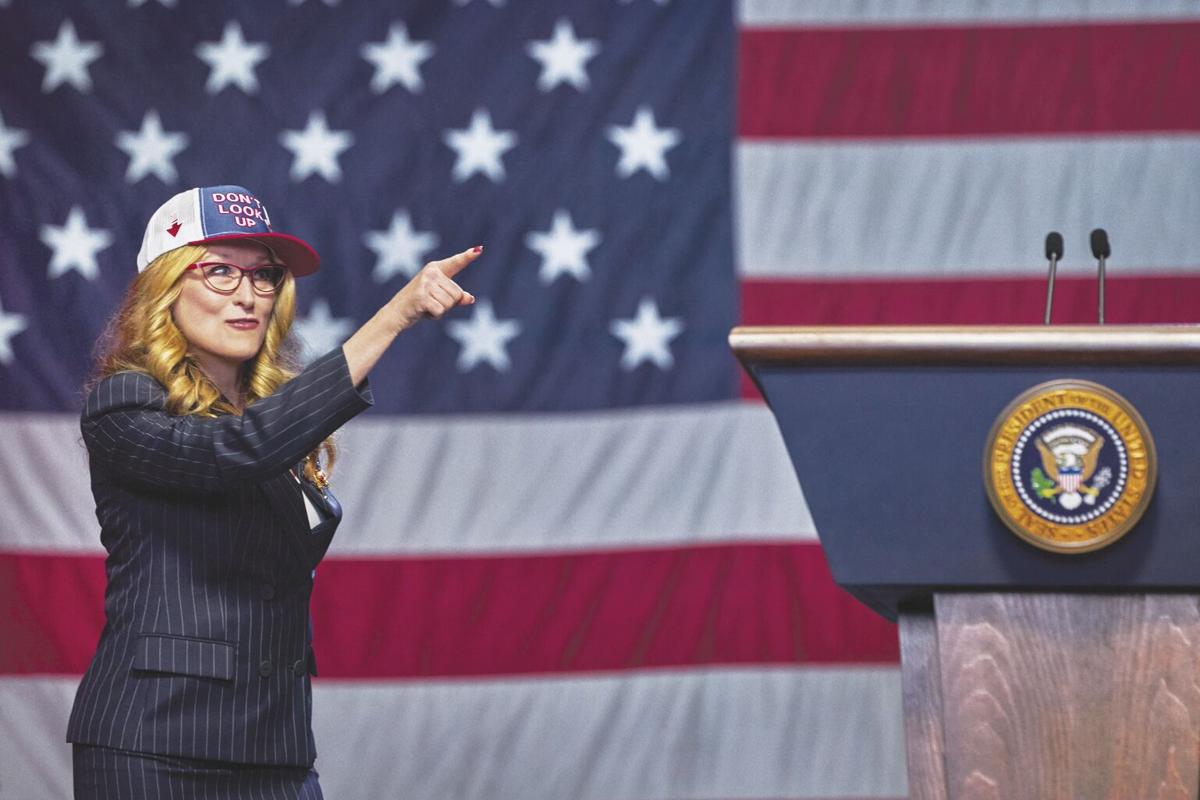 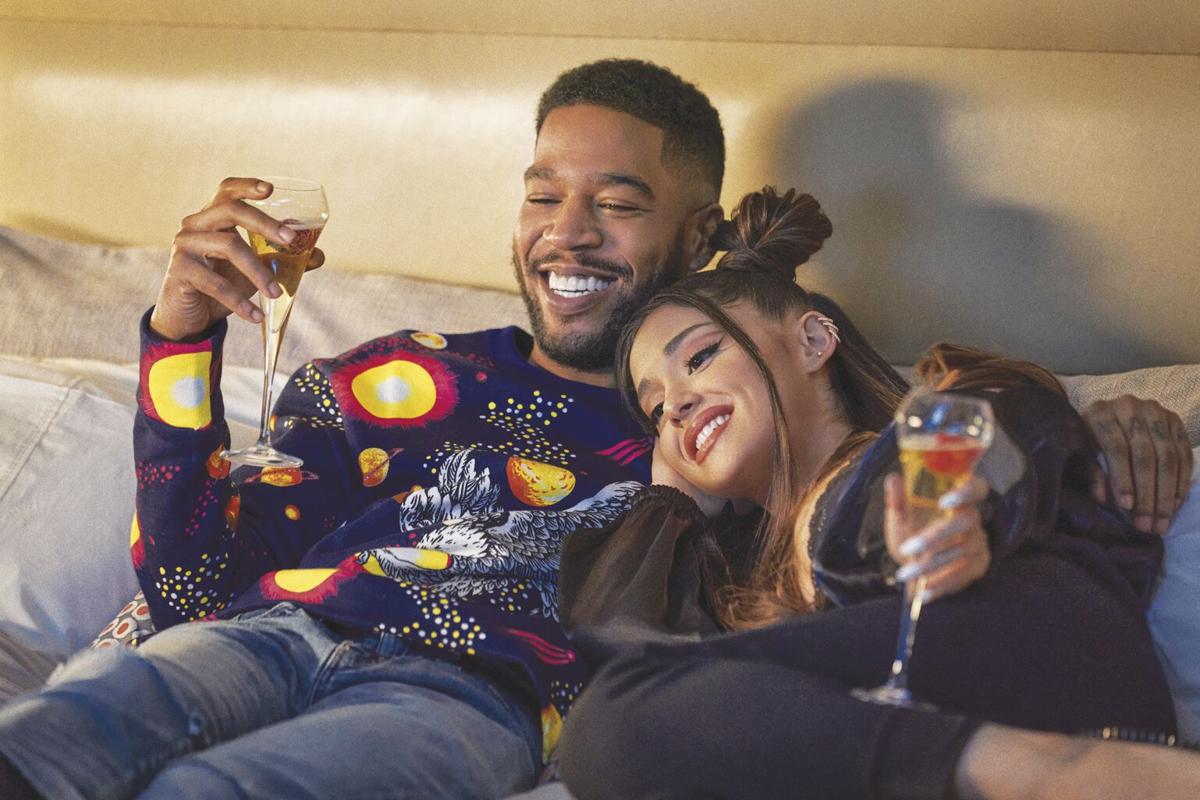 Two years ago, “Don’t Look Up,” co-writer and director Adam McKay’s latest socio-political satire, would’ve been seen as an over-the-top exaggeration of how selfish and shortsighted humanity can be during a crisis. Now, it’s an only slightly distorted mirror to the COVID-19 pandemic.

“Don’t Look Up” starts with an opening scene not dissimilar to a disaster movie with a planet-killing meteor discovered by Randall Mindy (Leonardo DiCaprio), a Michigan State University professor, and Ph.D. student Kate Dibiasky (Jennifer Lawrence).

With the help of Dr. Teddy Oglethorpe (Rob Morgan), a scientist at the White House, they get a meeting with the president (Meryl Streep) and her son (Jonah Hill), who is also her chief of staff. Randall and Kate are dismissed and told to “sit tight and assess” despite there being only six months until the end of the world.

A trip to a “Good Morning America”-style show doesn’t go any better with the insipid, sunny hosts (Tyler Perry and Cate Blanchett) falling to miss the point and Kate exploding into a tirade that leads to her becoming a meme. People are more interested in the relationship drama of a pair of pop stars (Ariana Grande and Kid Cudi).

Eventually, when it becomes politically advantageous for her, the president puts an “Armageddon”-style mission together to blow up the meteor. The mission is a go until billionaire Peter Isherwell (Mark Rylance) — a composite of Mark Zuckerberg, Steve Jobs and Elon Musk — suggests a new mission that would mine the meteor for valuable minerals that could be brought back to Earth and provide wealth and jobs to the world. He refuses peer review of his science but assures the world his technology can both extract the minerals and destroy the meteor.

Naturally, even with evidence of the meteor, there is a vocal group of science deniers that think it is just liberals trying to take people's rights away. Soon, a Don’t Look Up movement spreads that the president takes hold of in hopes of winning congressional seats in the midterm elections.

In many respects, “Don’t Look Up” acts as a parody of Roland Emmerich-style disaster movies like “Independence Day,” “The Day After Tomorrow” and “2012.” The characters that should be heroes are grotesque reflections of reality. The pilot sent on the world-saving mission (Ron Perlman) is xenophobic racist whose behavior is excused because he’s from “another time.” The president is motivated solely by self-interest and appealing to her “base.”

Like Emmerich’s films, “Don’t Look Up” has a star-studded ensemble cast, but unlike Emmerich’s disaster movies, McKay’s doesn’t cut between two or three different pods of characters that eventually intersect. Instead, McKay’s story mostly stays with Kate and Randall’s attempt to inform the public. It makes for a stronger, more focused film.

Kate and Randall do become fractured for a while as Randall gets pulled into a media frenzy as “America’s sexiest scientist.” He enjoys the fame as he’s transformed into an Anthony Fucci-esque figure informing the public. Conversely, Kate is dismissed as an hysterical, unappealing provocateur.

While the film is often funny in its absurdity — there’s a great running gag with Kate’s ongoing bewilderment that a five-star general sold her free snacks at the White House — it is also so close to reality that all you can do is shake your head in recognition of the type of selfishness and stupidity that has become all too commonplace in our daily life.

McKay is a shrewd satirist as he  proved with “The Big Short,” which dissected the 2008 economic crash and “Vice,” his portrait of Dick Cheney. He has a knack for distilling complex ideas into something that is easily digestible.

While McKay’s trio of satires puts a mirror up to a lot of humanity's worst qualities, his films aren’t necessarily nihilistic. Even as “Don’t Look Up” heads toward disaster, there are moments of hope, humanity and forgiveness.

Kate begins a shallow but sweet relationship with a skater kid named Yule (Timothée Chalamet) and Randall reconciles with his wife (Melanie Lynskey) following an affair with Blanchett’s Brie Evantee. There’s a final family dinner that is surprisingly poignant.

All the performances are on target. Hill is hilarious as the vapid son to the president with a severe Oedipus complex. Perry and Blanchett nail the false cheeriness and superficiality of daytime TV hosts. Streep is entertaining as a monstrous crossbreed of Hillary Clinton and Donald Trump.

Grande and Kid Cudi performs an outrageous song to raise awareness called “Look Up” that sounds like an uplifting ballad but features lyrics like “Just look up/Turn off that sh*t FOX News/'Cause you're about to die soon everybody.”

DiCaprio and Lawrence, while both being amusing, also bring a sincerity to their performance. They become the heart of the film and help to ground the film into some real emotion.

Similar to Stanley Kubrick’s “Dr. Strangelove,” this is a satire that is meant to act as a cautionary tale. The science denial on display most readily brings to mind anti-vaxxers but the world-ending meteor also brings parallels to global warming.

While not as funny as “Dr. Strangelove,” it is likely that in a few decades “Don’t Look Up” will act as a window into this specific moment in time. We’ll tell the next generation, “No, there wasn’t a meteor, but yeah, it actually was that crazy.”

"Don't Look Up" is available on Netflix.