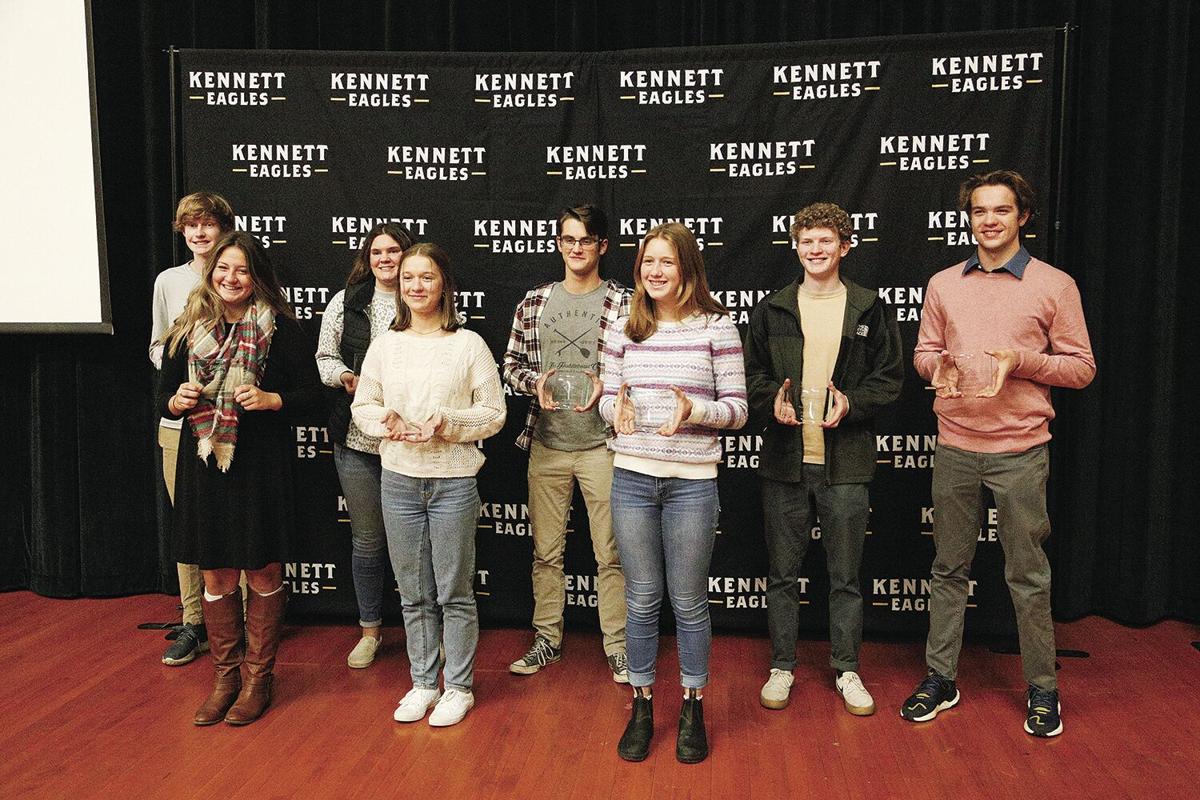 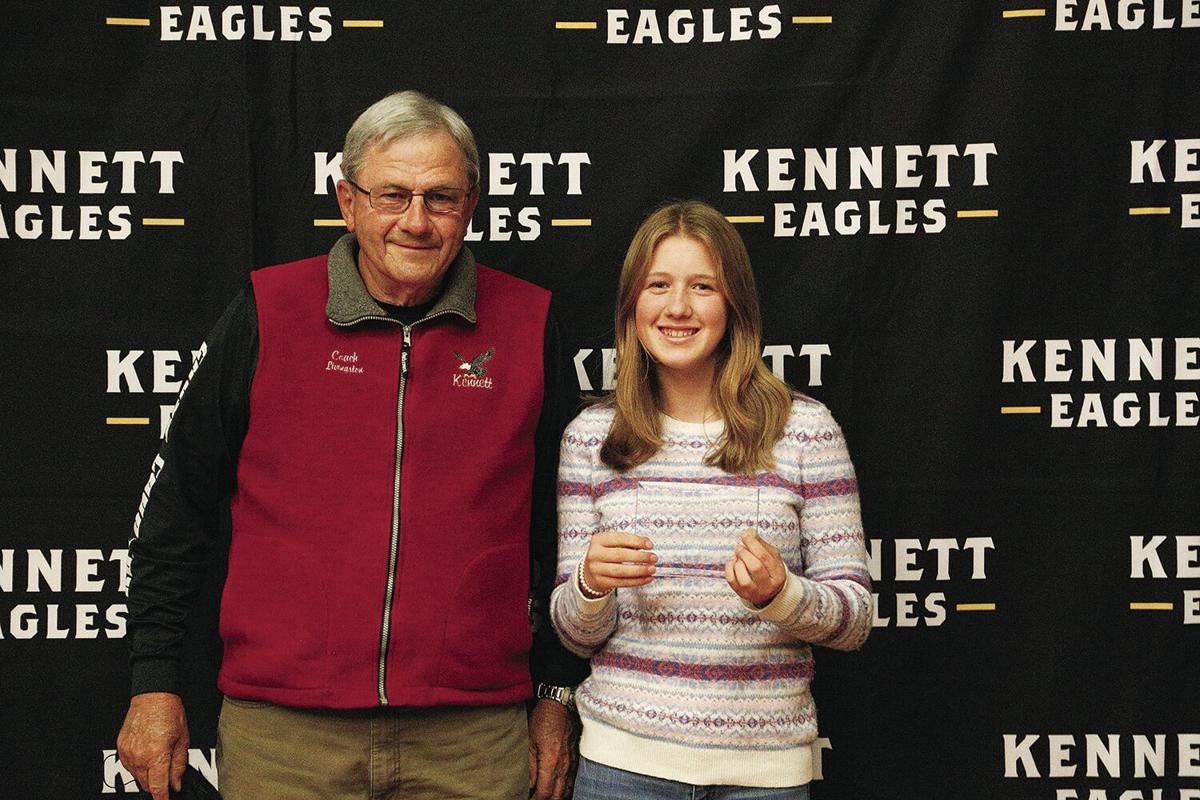 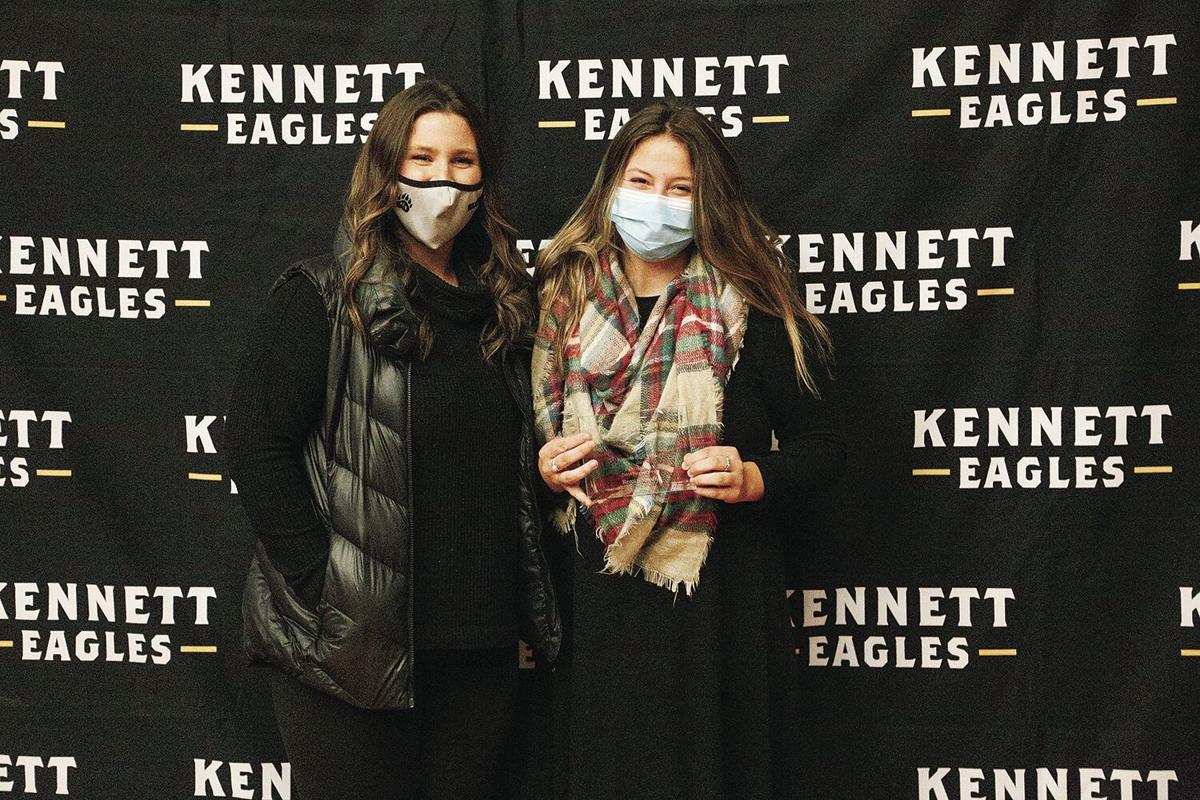 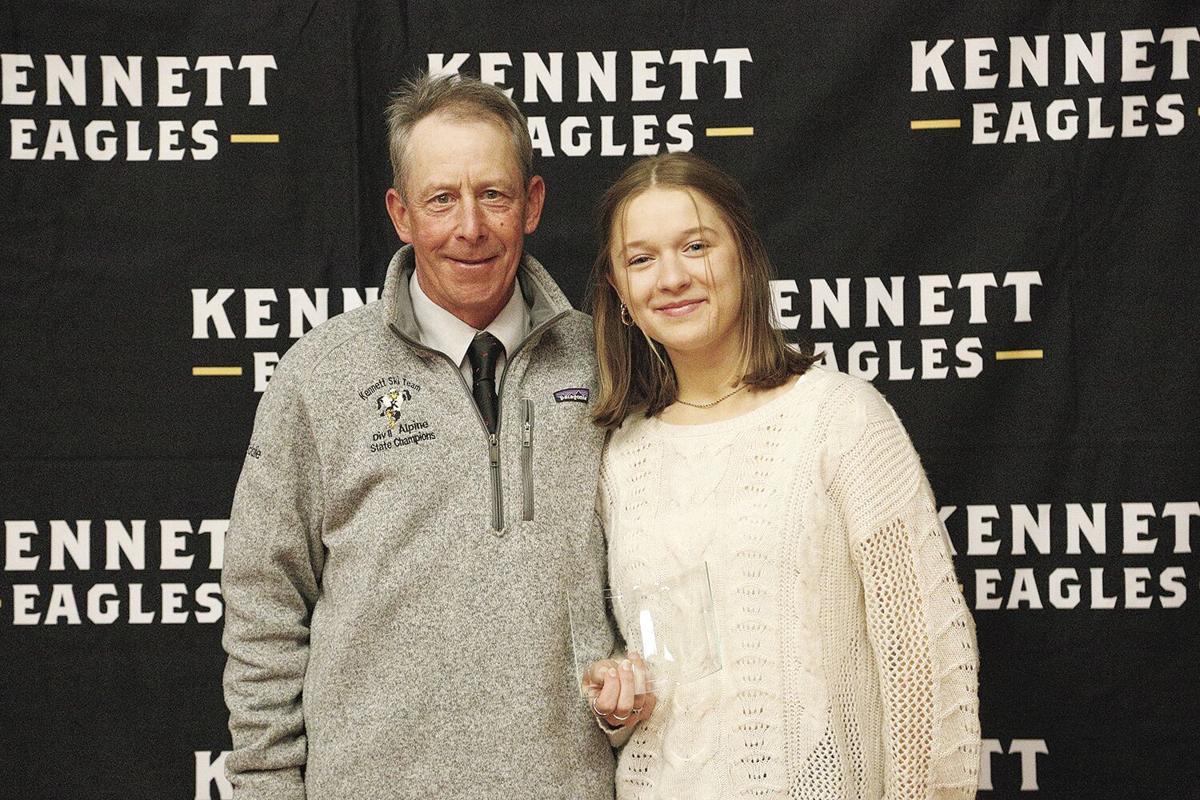 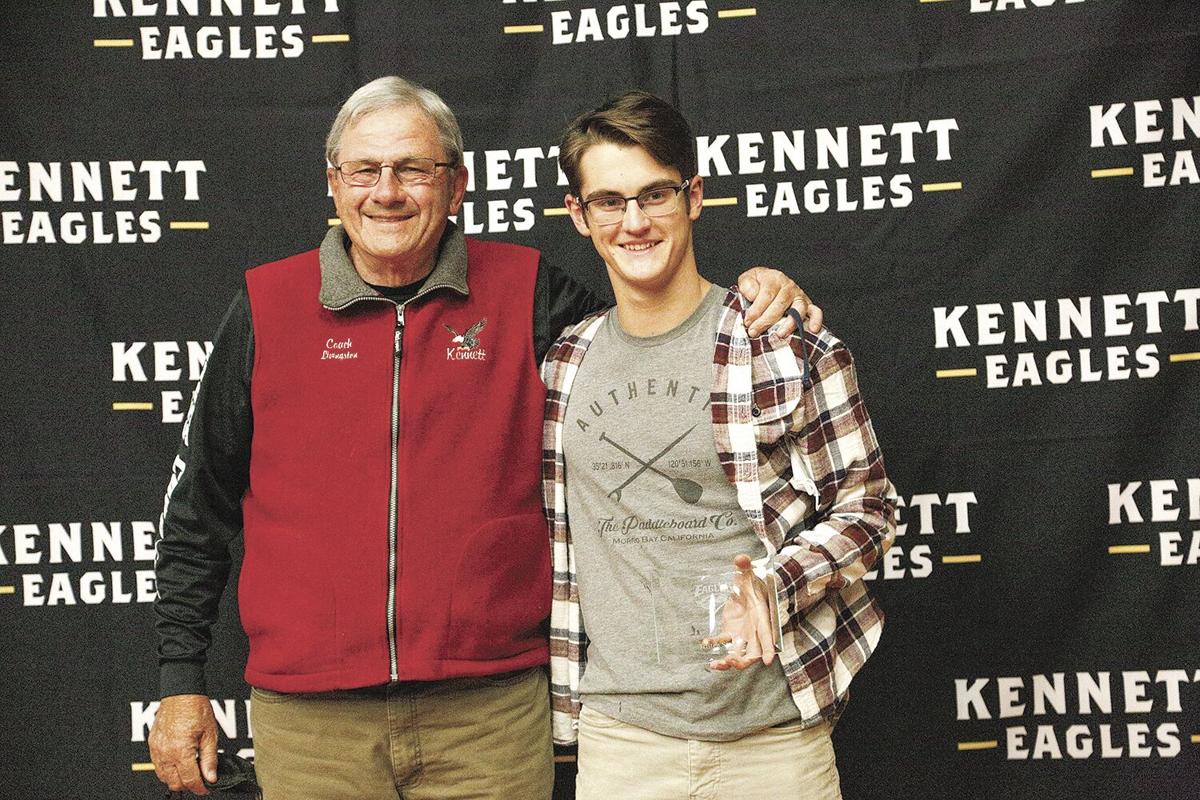 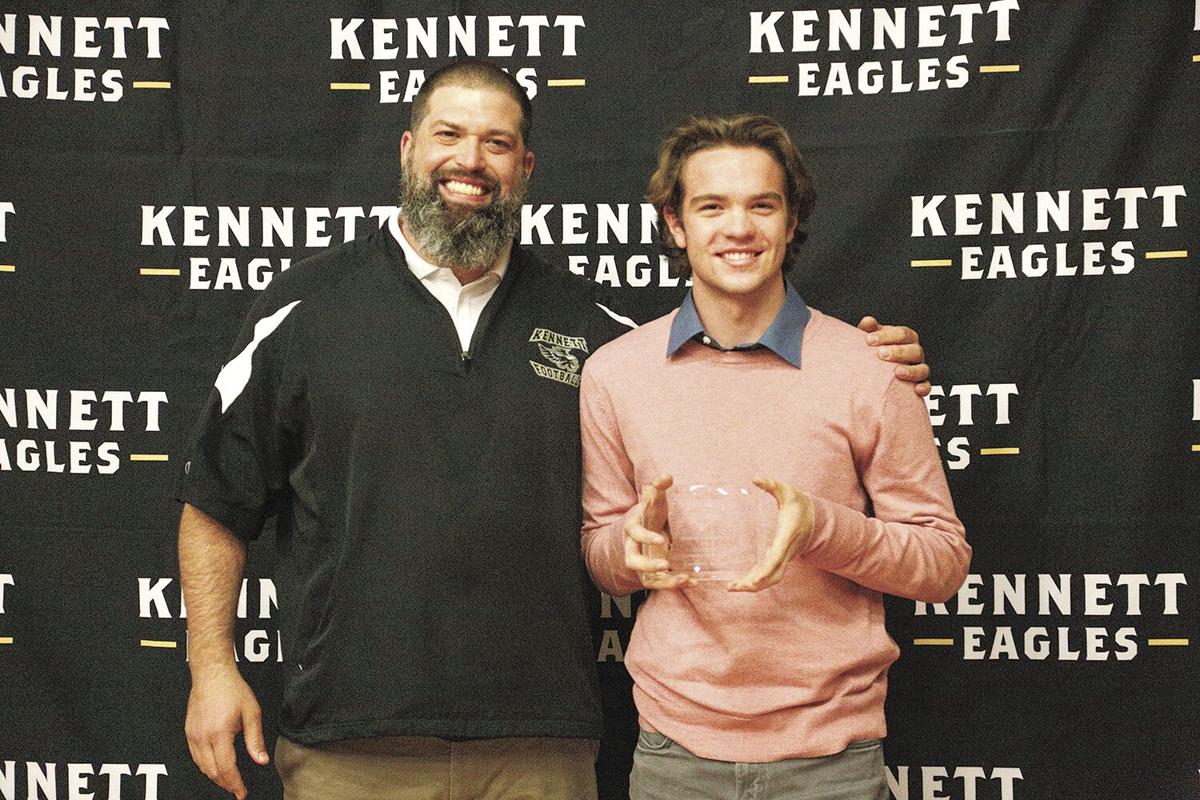 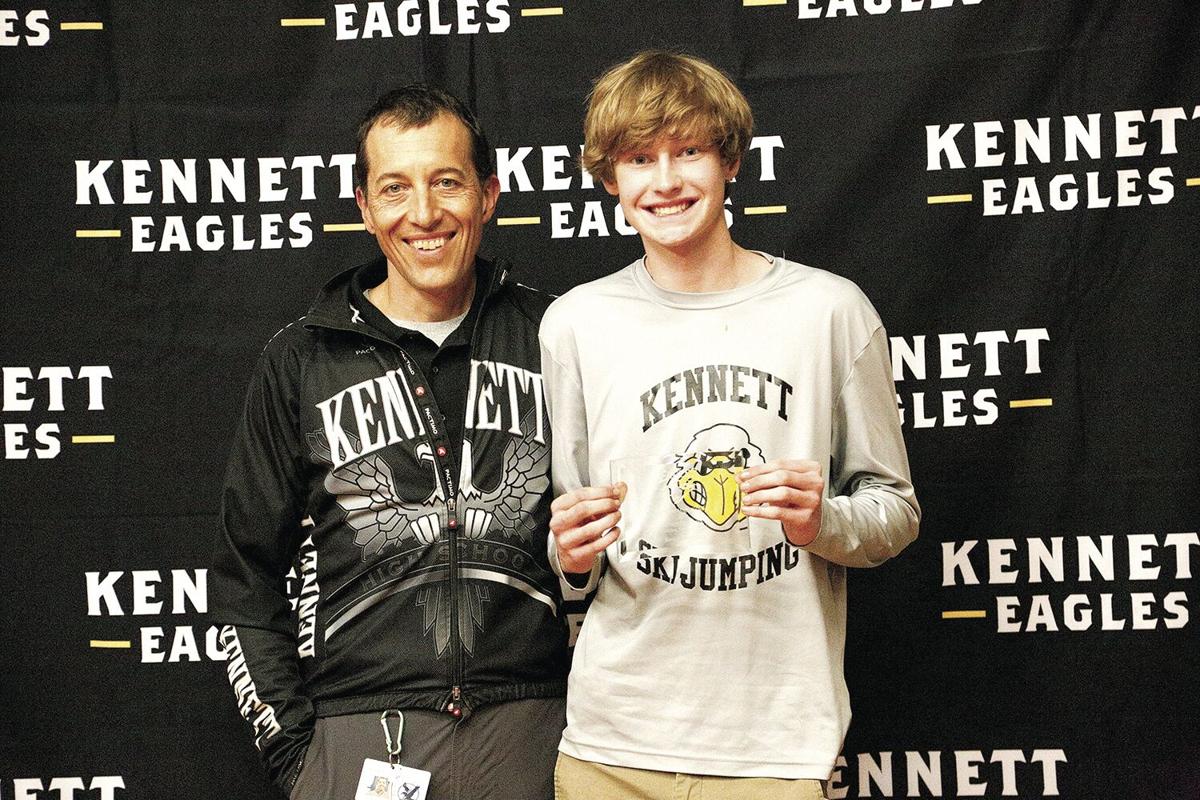 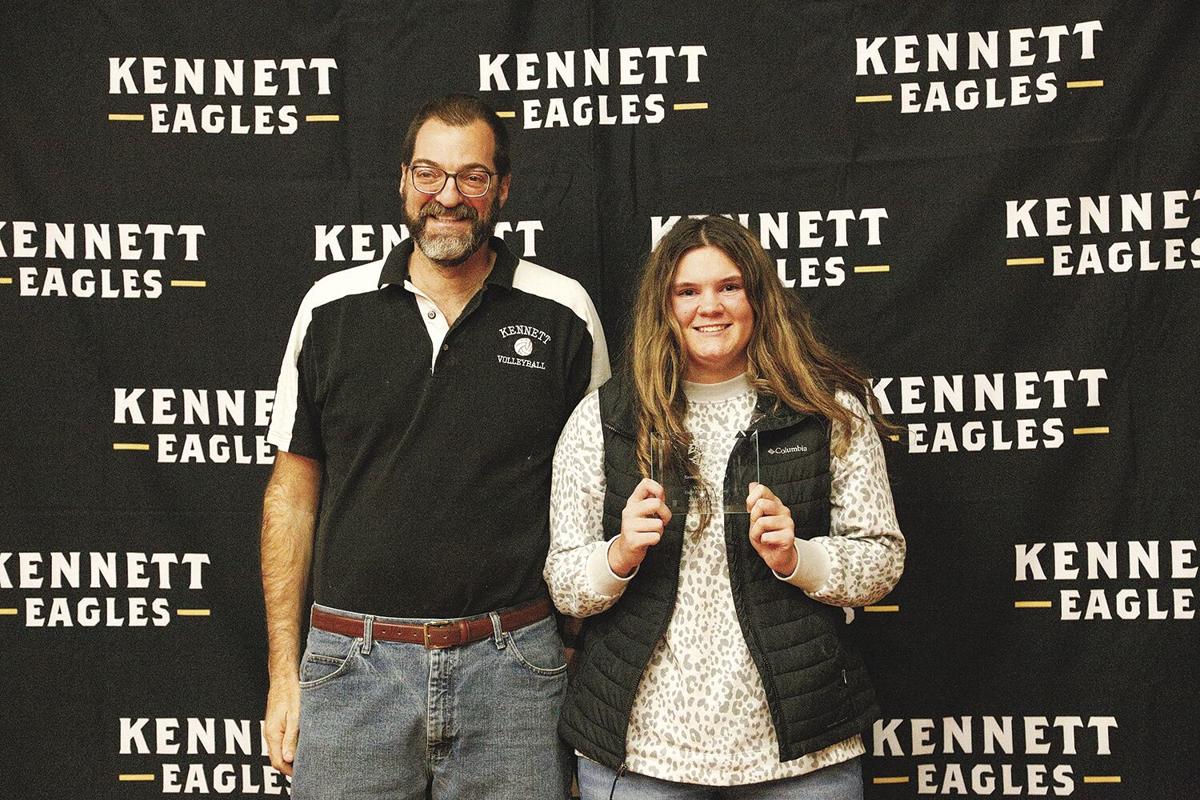 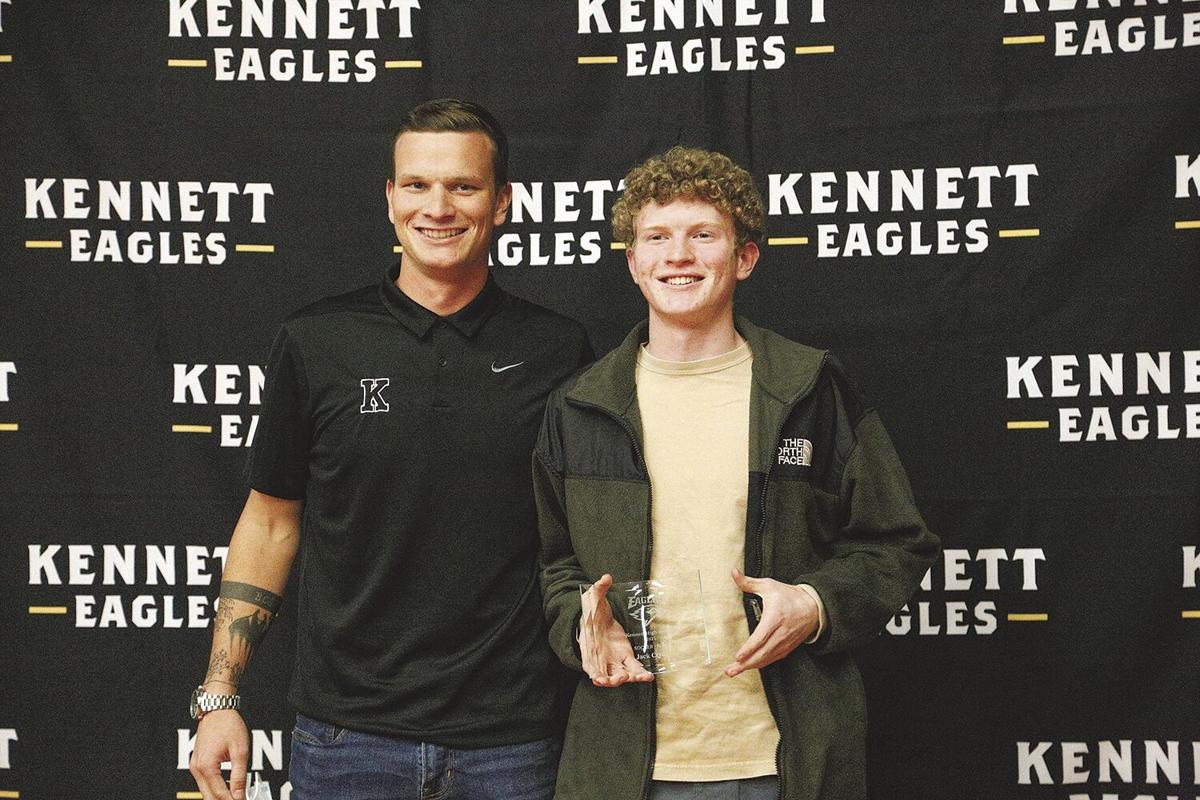 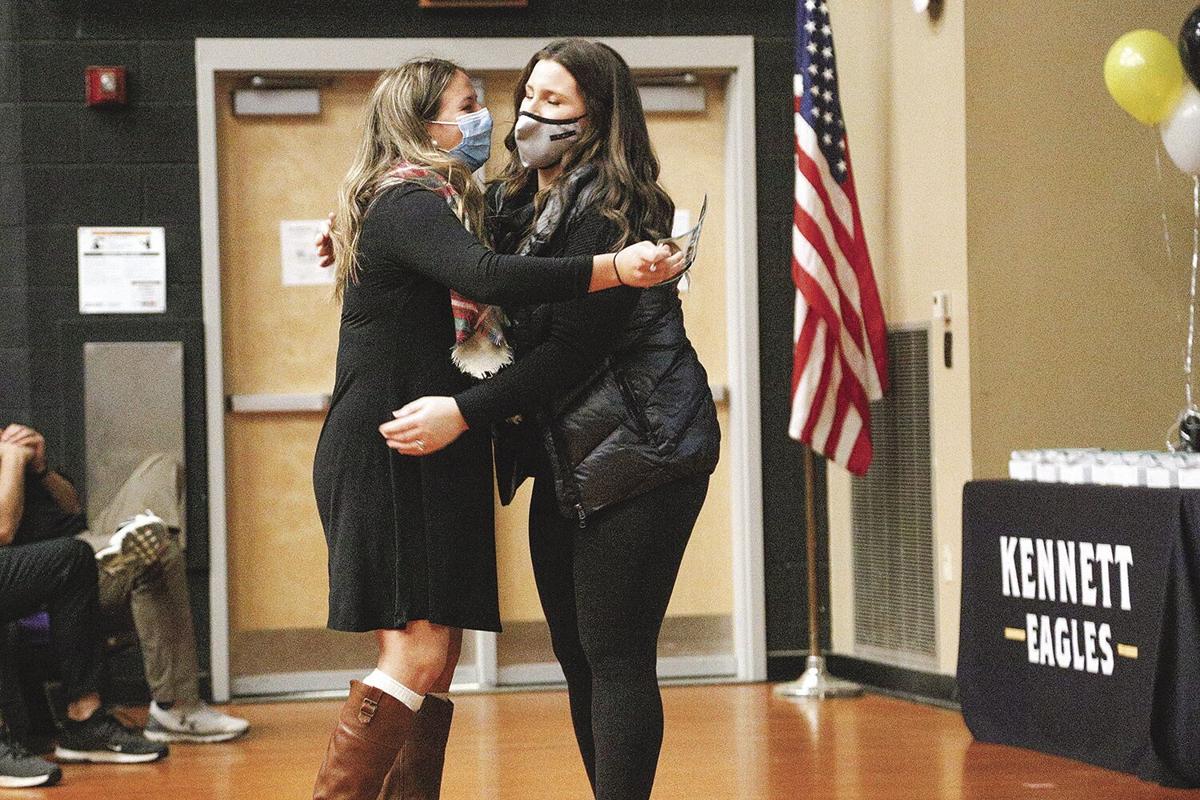 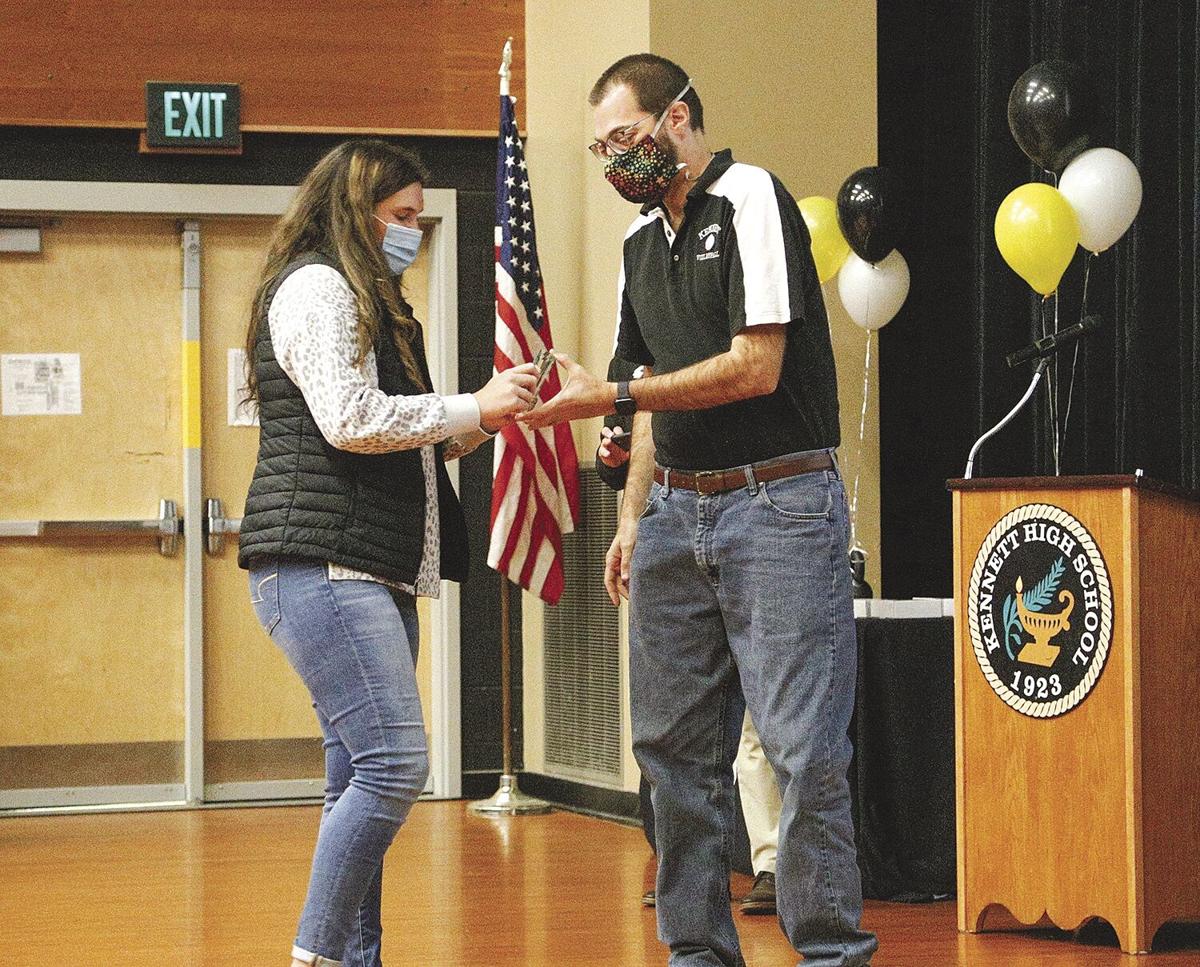 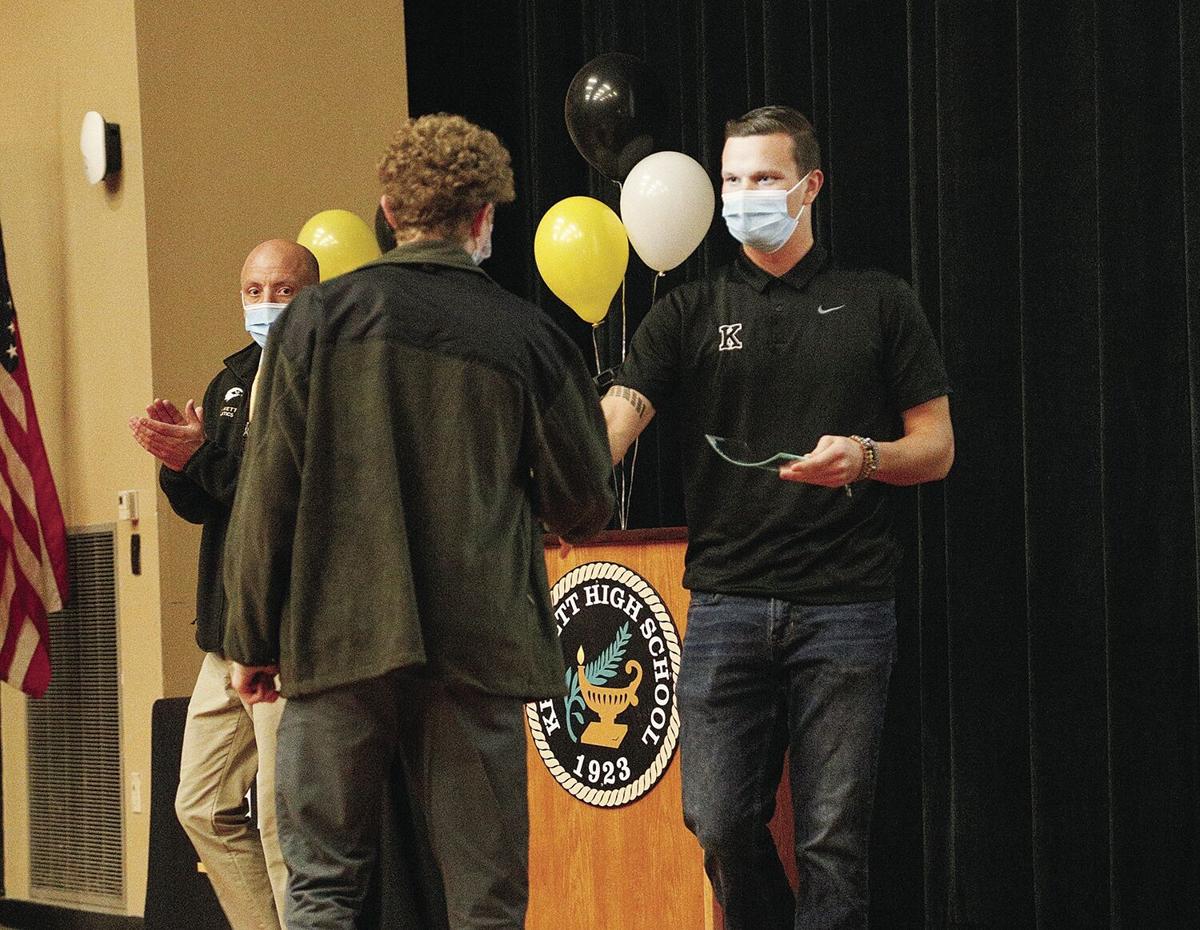 Only the major award winners and their families along with coaches, trainer Colby Locke and the media were able to attend the 30-minute ceremony. Everyone had assigned seating, wore masks and spread out throughout the auditorium.

Kennett High Athletic Director Neal Weaver served as master of ceremony for the evening, which kicked off with him expressing his gratitude that the fall season actually happened.

This year's athletic award winners were:

In cross-country running, Coach Bernie Livingston presented the Cross-Country Award to senior Tristen Smith for the boys and senior Amy Burton for the girls.

The cross-country award "is presented each year to the member of each team who both on the field and in the school best demonstrates the qualities of loyalty to Kennett High School, citizenship and sportsmanship — both as a follower and as a leader."

Gaudette was unable to attend the ceremony as she was visiting Converse University in Spartanburg, South Carolina. She signed her national letter of intent to play field hockey for the Division II school on Nov. 10.

The Marsden Award "is presented to a senior, a player who demonstrates good sportsmanship and a positive attitude. This athlete is also very coachable, works hard, and is a committed member of the team."

The Deryl Fleming Award "is presented to the field hockey player that demonstrates true commitment, dedication and love for the game of field hockey."

The Sam Fuller Award is "given annually to a senior member of the football team, someone with great character and has displayed strong leadership skills, someone who has placed the needs of others and the team in front of their own, a truly unselfish player."

“I believe it's the oldest athletic department award that the school gives out,” Beckwith said of the Sam Fuller Award. “Sam Fuller is a Kennett High graduate and a veteran of our country who served during World War II and from my understanding was killed in action. And he was known as an outstanding teammate, would do anything that he could for the people around him. And, a lot of the things that we still value today on in our football program, being a good teammate, a good leader, doing the right thing.”

In golf, Ed Bradley announced senior Cassidy Krieger as the recipient of the Golf Award.

The mountain bike award "goes to a deserving student-athlete who has participated in three or more seasons, has excellent character and attitude toward the sport and volunteer efforts to support the team in local events."

The Kennett Boys Soccer Award "is given to a player who from the first day of training to the last game has shown a consistent and always improving level of commitment to the team. He has proven to be a leader during training and during games."

The Suzy Engler Award for girls' soccer "is given to a player who is dedicated to the team, shows a love of the game, enthusiasm for the sport, good sportsmanship both on and off the field and holds herself as a good leader."

The volleyball award "goes to an individual who shows great improvement and skill throughout the season. Has a positive spirit and ability to motivate her teammates and is an asset on and off the court."

All other fall athletes received their certificates and varsity letters remotely.