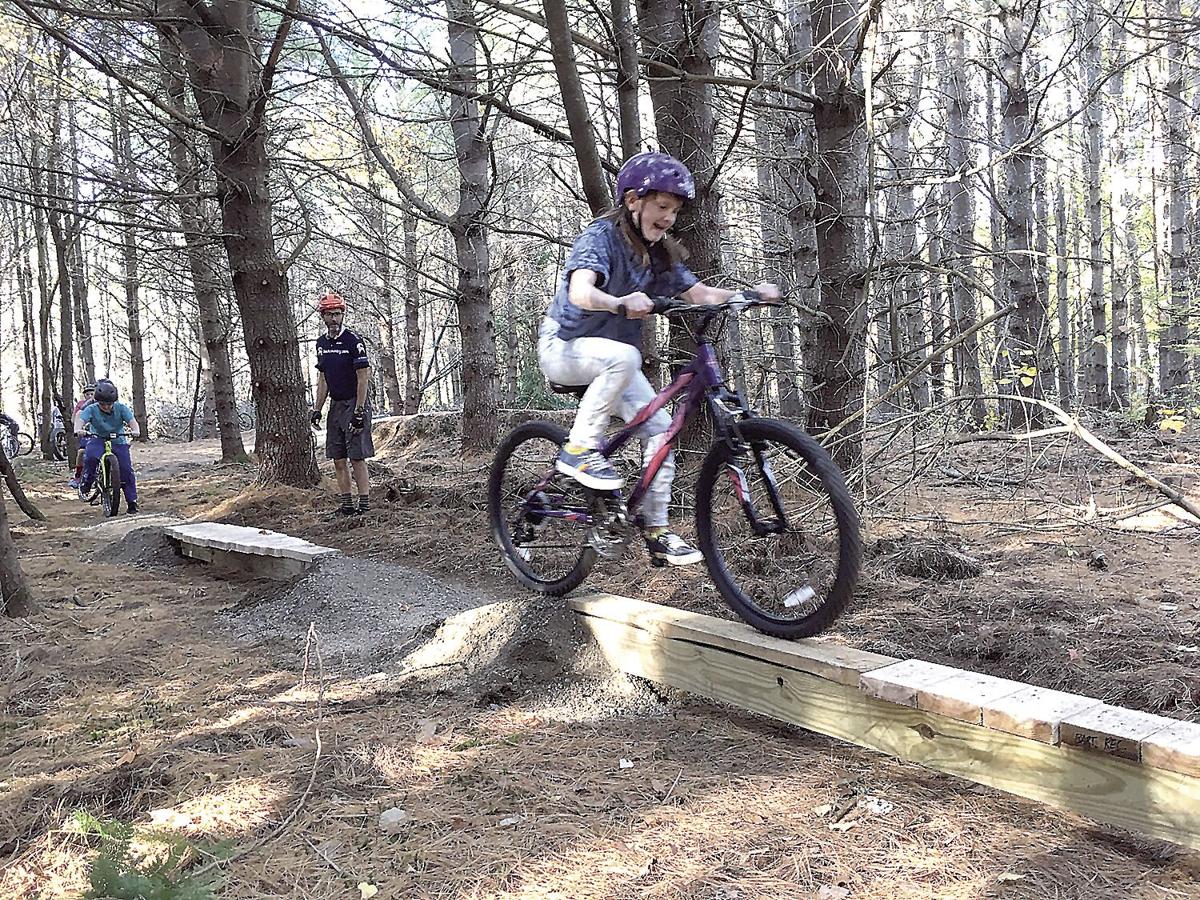 As Coach Robert Chase looks on, a rider tries her luck and skills on the balance bridge feature. (SALLY MCMURDO PHOTO) 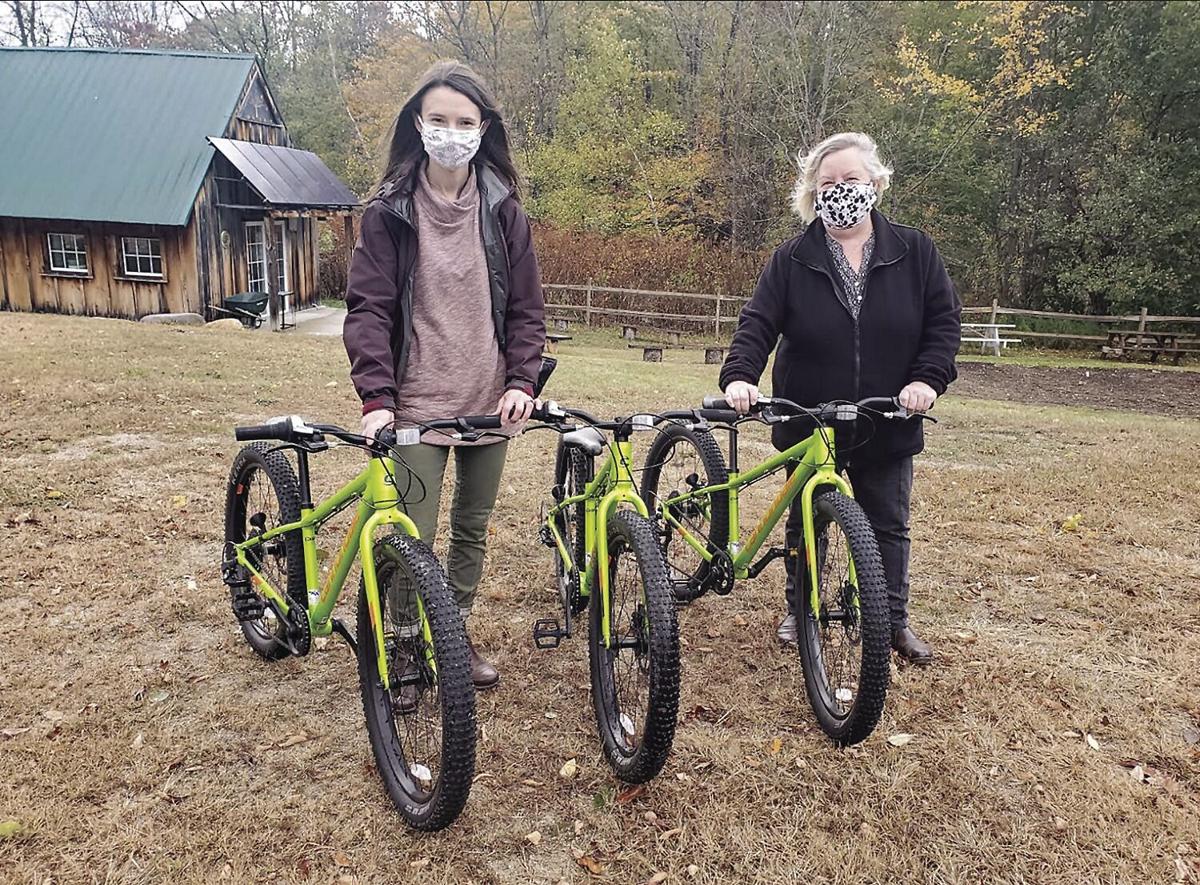 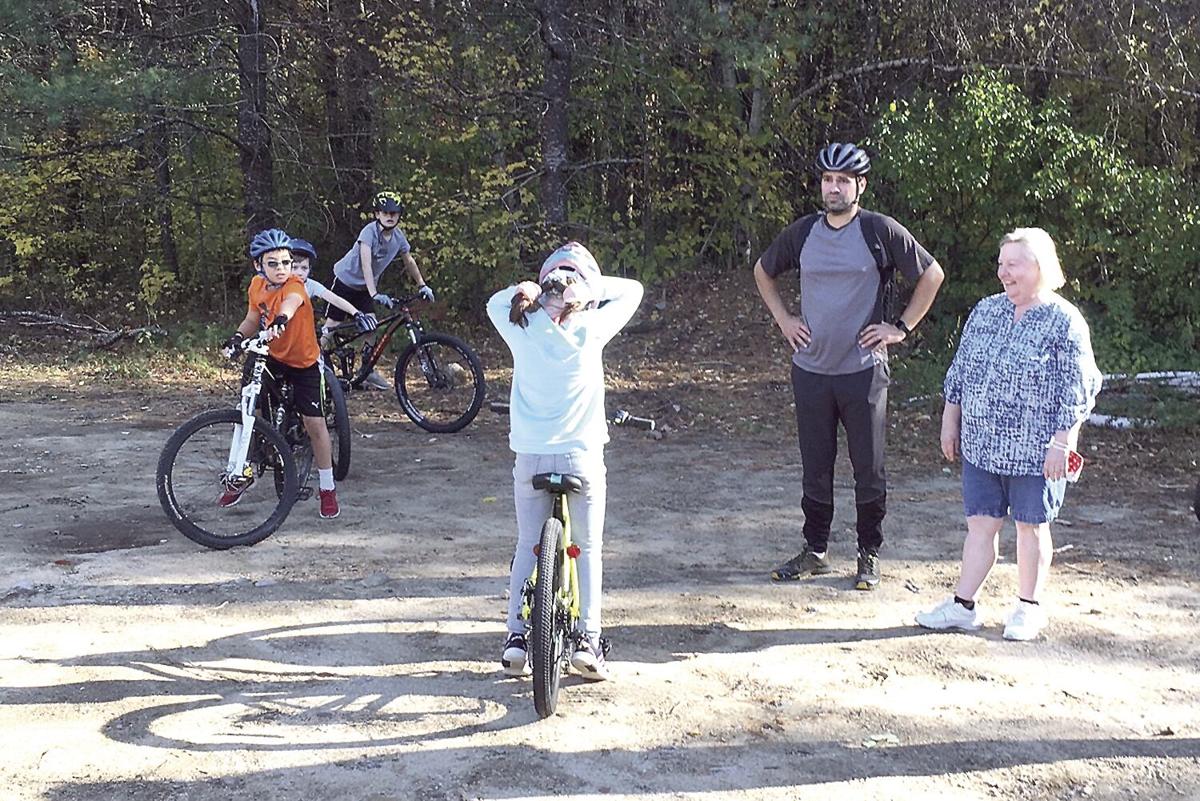 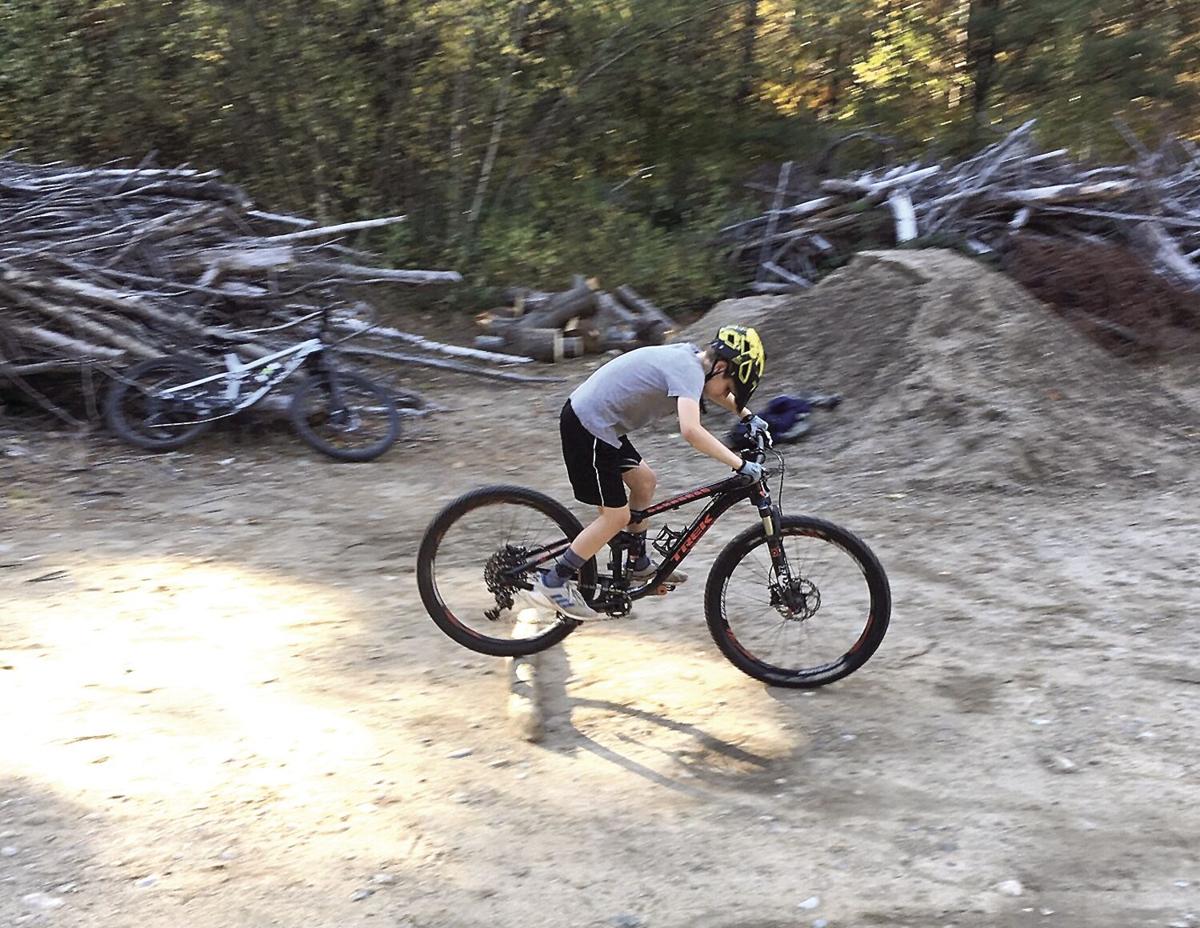 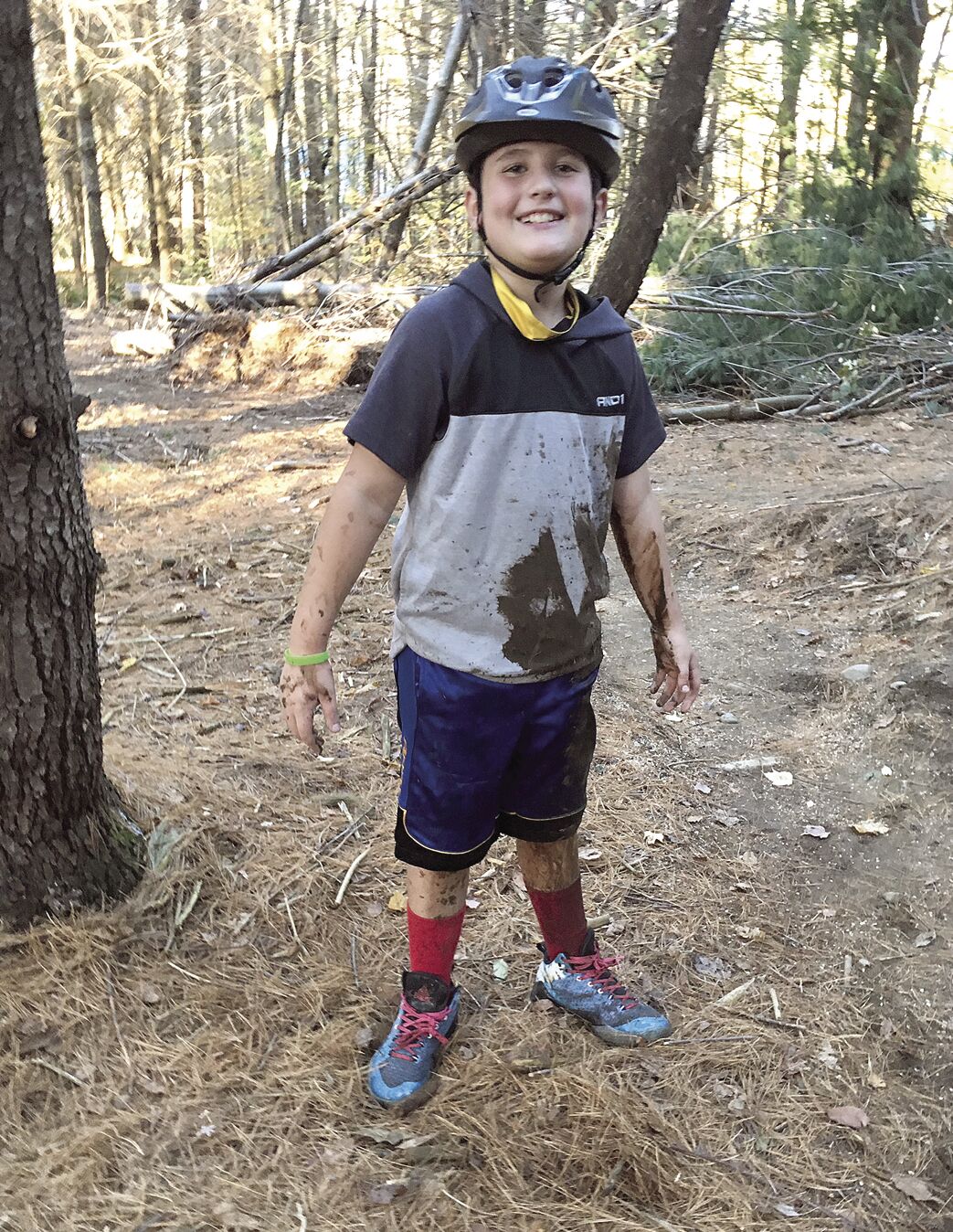 Getting covered in mud after falling into the pump track puddle is part of the fun of being in the mountain bike club. (SALLY MCMURDO PHOTO) 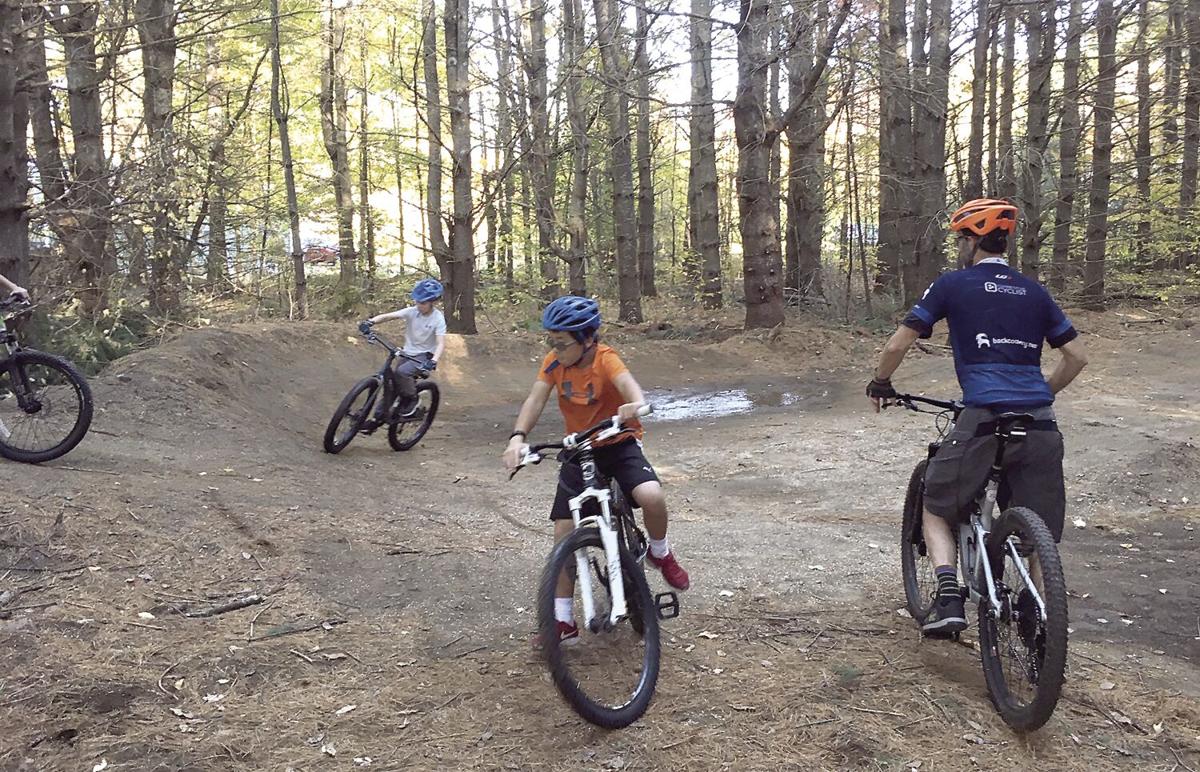 As Coach Robert Chase looks on, a rider tries her luck and skills on the balance bridge feature. (SALLY MCMURDO PHOTO)

Getting covered in mud after falling into the pump track puddle is part of the fun of being in the mountain bike club. (SALLY MCMURDO PHOTO)

Creating a children’s mountain bike club sounds easy, but it takes quite a bit of planning and coordination. Who’s going to start it, how will they get the word out, and get kids signed up?

Where to ride was easy, thanks to the work of Mike Morin, Bartlett Conservation Committee member. Securing an $8000 REI Grant for BARA, he hand-built an entry-level skills loop around the perimeter of Bartlett’s new Morrell Family Community Complex, located on Route 302. Chris Lewando of Tyrol Trails and Nat Lucy of Lucy Hardware’s donated time and equipment and added a pump track to the eastern end. The place for young riders to practice and build skills was in place.

Boys and girls signed up quickly for the free program. Before she knew it, Annette had over 15 eager riders. The problem was not all the kids had suitable mountain bikes and helmets. What to do? Annette put out the call for donations.

Used bikes were donated, but some needed work.  Mike Ahearn, with his bike technician skills, was able to fix them up and make them rideable. Annette used them to create a “bicycle exchange” program for any kid in the club that needed a bike. Students are given bikes they can ride until they outgrow them. When they do, they turn them in for a bigger bike.

Sun & Ski Sports of North Conway generously donated three good quality 24” Cannondale Cujo mountain bikes. On Oct. 8, Store Manager Erica Frieswick delivered them to Annette to use in her “loaner program.” If a child needs a bike to ride on the skills trail, Annette will loan it to them for the day, any day. All they have to do is ask or have their parents contact Annette.

Even with these bike donations, Annette could always use more 20- and 24-inch good quality mountain bikes to refurbish and provide for those in need. If you have any to donate, contact her at bartlettrec@gmail.com or (603) 374-1952.

Students also needed helmets. Some didn’t have them or they weren’t in good condition. The Bartlett Police Department and the Mount Washington Valley Bicycling Club responded to Annette’s call by donating helmets of all sizes for students to use for free.

As the program grows, there will also be a need for a place to store donated bikes and helmets. Annette hopes local hardware stores will donate materials or funds to build a storage shed to keep them safe over the winter.

Right now, they have the basics. With the group outfitted, coaches on board, and a place to ride, the BARA mountain bike club was ready to roll!

Last Thursday, I joined those mountain biking bears. Parking at the Morrell Family Community Complex main entrance, I unloaded my bike. The mountain bike club was meeting at another entrance a short distance east on Route 302 that will eventually become the main mountain bike access.

Although the landscape seemed flat, the Perimeter Trail had plenty of dips and curves to make it interesting. Rocks, roots and tight spaces between trees make natural obstacles on the ¾ mile-long trail. Purpose-built wooden and dirt features will be added for riders to practice their balance and coordination skills.

At the mountain bike parking lot, I saw parents, cars, and kids on bikes everywhere. There was so much energy and excitement! Riders were jumping over dirt mounds and doing pump track circuits while they waited for the group to organize.

I saw Annette and two adult riders greeting the students. When I rode over, she introduced me to Mike Ahearn and Robert Chase, coaches for the newly formed BARA Mountain Bike Club.

The mountain bike club has been an instant hit. A few weeks into its start, there are already 15 students signed up, with more showing up each day. When I was there last Thursday, there were more than 18 girls and boys cranking around.

Coaches Mike and Robert quickly split them into two groups to spread out the energy and work on different skills. Mike’s group headed to the pump track.  I followed Robert’s group to watch them work on a newly added feature- a balance beam.

Two narrow bridges with a dip in between had been constructed to teach kids how to ride and balance. Robert advised kids to look ahead, not down at the bridges, and to keep pedaling. He told them not to worry if they fell off — the bridges weren’t very high and there was soft dirt on the sides. If need be, they could always put their feet down to stabilize.

Riders with more experience and confidence rode right over the bridges. Others were timider, making the first bridge, but stalling on the second. Everyone had multiple tries and many got better at making it all the way across. Riders were learning new bike handling skills and building confidence.

As Mike’s group left the pump track for the Perimeter Trail, Robert’s worked on riding over logs. He reviewed skills worked on before — having pedals in the” ready” position, and pulling up on the front fork to lift the front wheel off the ground. One by one, the riders tried using these skills to get over a small log in the parking lot. Front wheels came up and cleared and back wheels followed!

When Mike’s group came back from their loop ride, it was time for Robert’s group to hit the trail. He reminded them about group riding skills — pay attention, look ahead and communicate. Riders stopping or slowing down should tell those behind them — “stopping” — to avoid crashes. It was a quick ride around the perimeter and back to the pump track.

Mike’s group moved to the balance bridge. Our group headed to the pump track. Two riders at a time were allowed on the figure 8 course — one at each end. They practiced “pumping” the rollers and making the berms, getting smoother and faster with each round. Future plans are to expand the pump track to allow for more “pumping.”

A “natural” feature in the middle — a mud puddle —  grew bigger and bigger with each rider’s pass. Finally, one rider made a tactical error, turned his wheel sideways and went down in the mud! Unhurt, he posed for pictures with his mud-covered front. His teammates cheered and his coach gave him the “muddiest” award.

It was getting late and parents were showing up to take kids home, but some couldn’t stop riding and jumping off things. The BARA mountain bike club has them all “pumped!”

For more information about the BARA mountain bike club, make a donation, or volunteer, contact Annette Libby at bartlettrec@gmail.com or (603) 374-1952. She’d love to hear from you.

Sally McMurdo is a bike safety instructor and cyclist who lives in Glen.