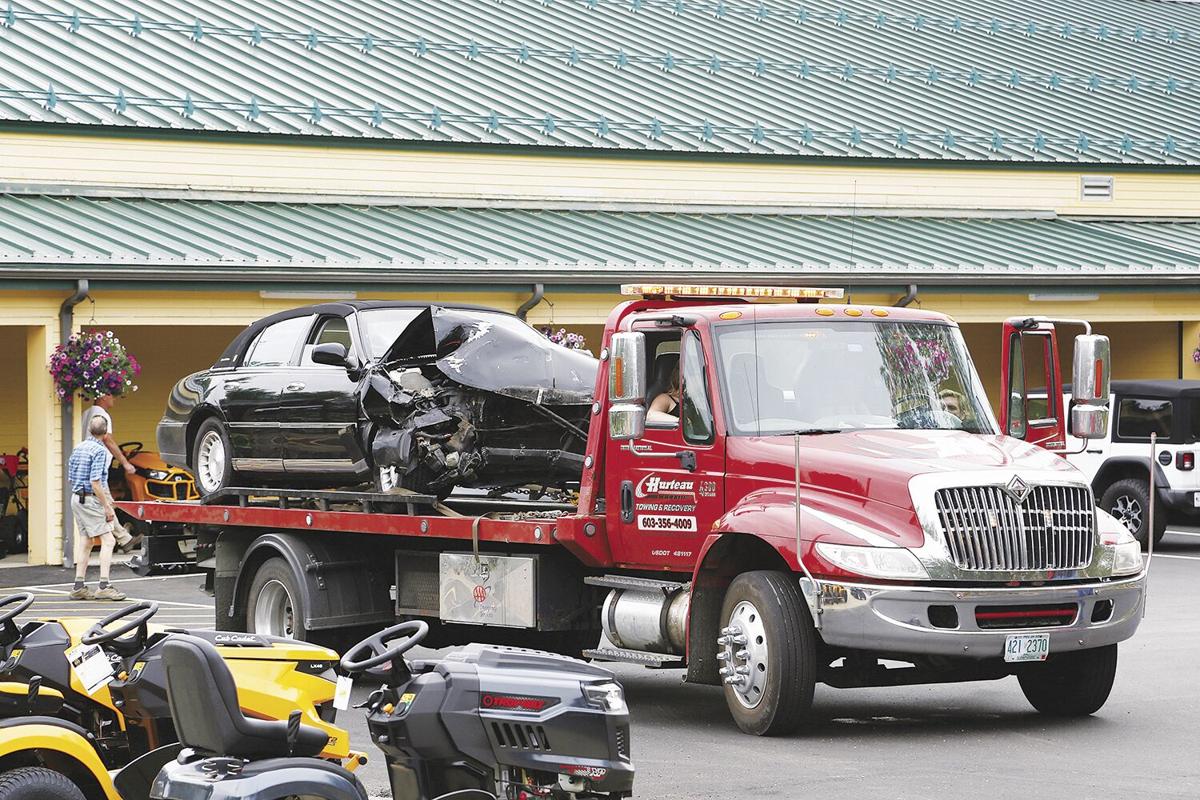 Amazingly, both drivers walked away from the collision that destroyed the front end of a Lincoln Town Car on Route 16 outside Lucy’s Hardware in Intervale Thursday afternoon. Police say a northbound pickup struck the southbound sedan. (RACHEL SHARPLES PHOTO) 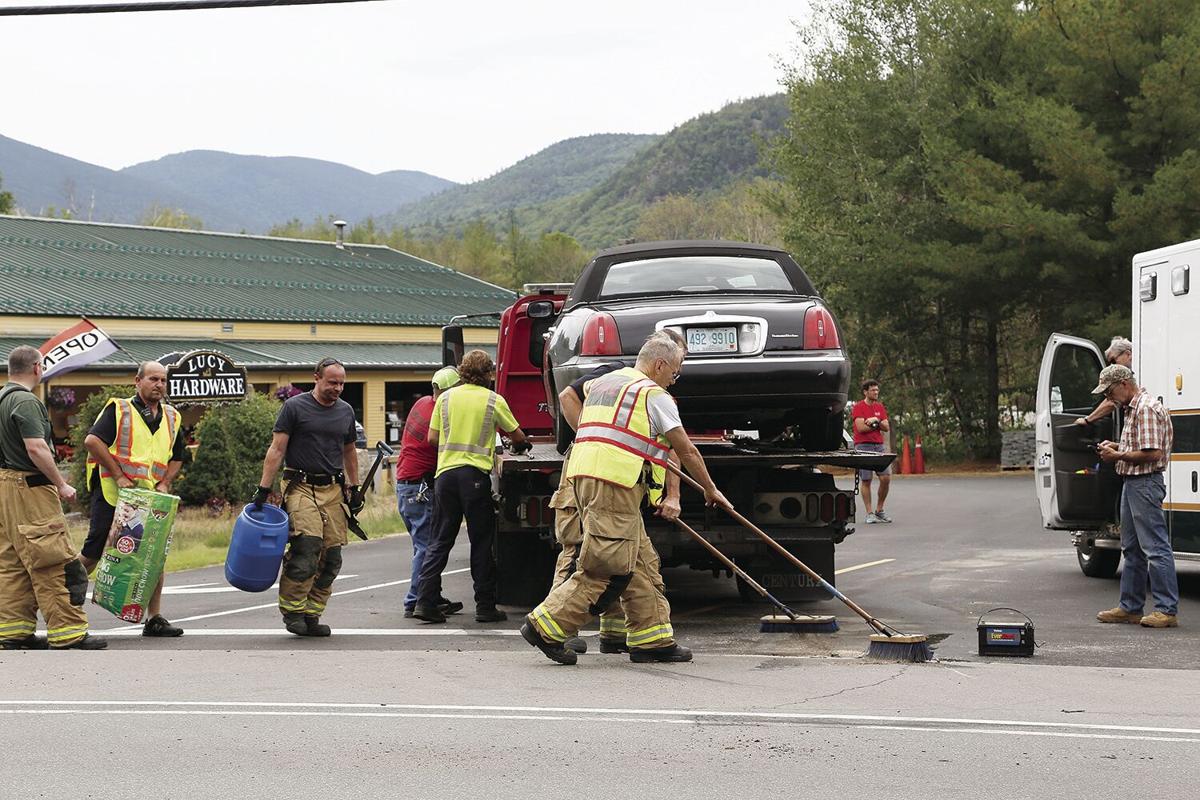 First responders sweep up debris as a vehicle involved in an accident gets lifted on a tow truck as Lucy's Hardware in Intervale Thursday afternoon. (RACHEL SHARPLES PHOTO) 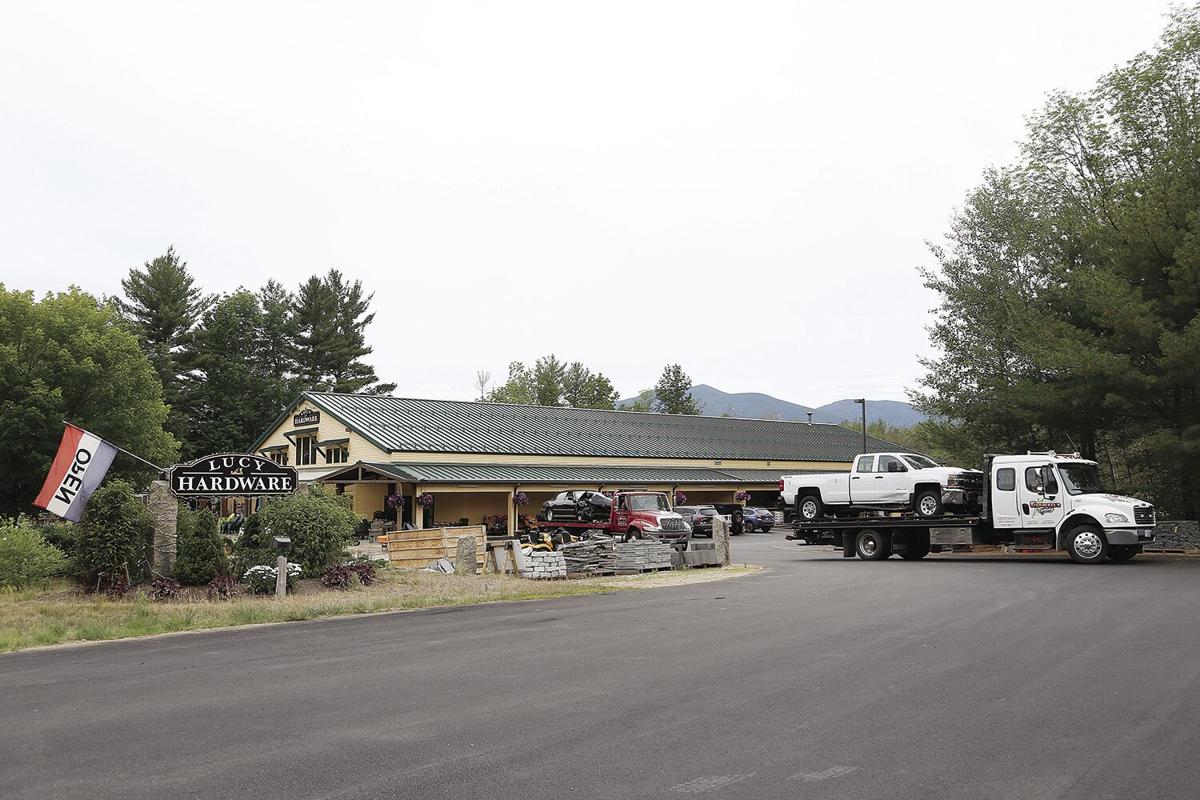 Amazingly, both drivers walked away from the collision that destroyed the front end of a Lincoln Town Car on Route 16 outside Lucy’s Hardware in Intervale Thursday afternoon. Police say a northbound pickup struck the southbound sedan. (RACHEL SHARPLES PHOTO)

First responders sweep up debris as a vehicle involved in an accident gets lifted on a tow truck as Lucy's Hardware in Intervale Thursday afternoon. (RACHEL SHARPLES PHOTO)

BARTLETT — A portion of Route 16/302 was closed for a half-hour midday Thursday next to Lucy Hardware in Intervale following a collision between two New Hampshire-registered vehicles.

While no one was injured, both vehicles — a white Chevrolet Silverado HD 3500 pickup and a black Lincoln Town Car — had to be towed from the scene.

Bartlett Police Chief Chris Keaton said the accident occurred at 1:42 p.m., when said the pickup was heading north, went to turn into Lucy Hardware but struck the Lincoln sedan, which was traveling southbound. Although Keaton declined to say where either driver was from, the pickup was seen to have a “Jackson Fire Department” tag attached to its front plate. “Fortunately, it was a low-speed crash,” Keaton said.

“The driver of the pickup said she didn’t realize the sedan was there. The gentleman in the sedan said he was going between 40-45 mph and saw the pickup and was able to angle his vehicle to the right to avoid a head-on collision,” he said.

The air bags deployed in the Lincoln.

“Both vehicles were pretty banged up, but both the lady and the gentlemen were able to walk away, which was the best part,” said Keaton.

Meanwhile, the Bartlett Fire Department responded the same day to a fire in the clubhouse at the Seasons at Attitash at 1:05 p.m.

“It was a drier fire,” said Bartlett Fire Chief Jeff Currier. “They have three commercial driers, and the middle drier caught fire,”

The fire was contained to the clothes drier. “My guys were on the job, and they rocked,” Currier said. “They did a great job.” Currier said Jackson Fire also responded. “The mutual aid we have in this valley is awesome,” said Currier.

Keaton said he had just responded to the fire, “and wasn’t there five minutes when I got the call to turn around and head to Lucy’s,” Keaton said.

Lucy Hardware closed briefly while Crowell’s and Hurteau Towing took the vehicles from the scene.

I was driving the black towncar, I understand the woman did not apparently see me as she turned into Lucy's Hardware. I hope she is still okay in following days. And I hope this isn't to much of a burden to Jackson fire department if this was their vehicle.

I greatly appreciate the compassion and care from the emergency services that came to the accident scene. Kaitlyn and Jeanne providing medical checkup were outstanding. As a continuous patron of Lucy's I appologize for any lost revenue that happened. And to Chief Keaton thank you