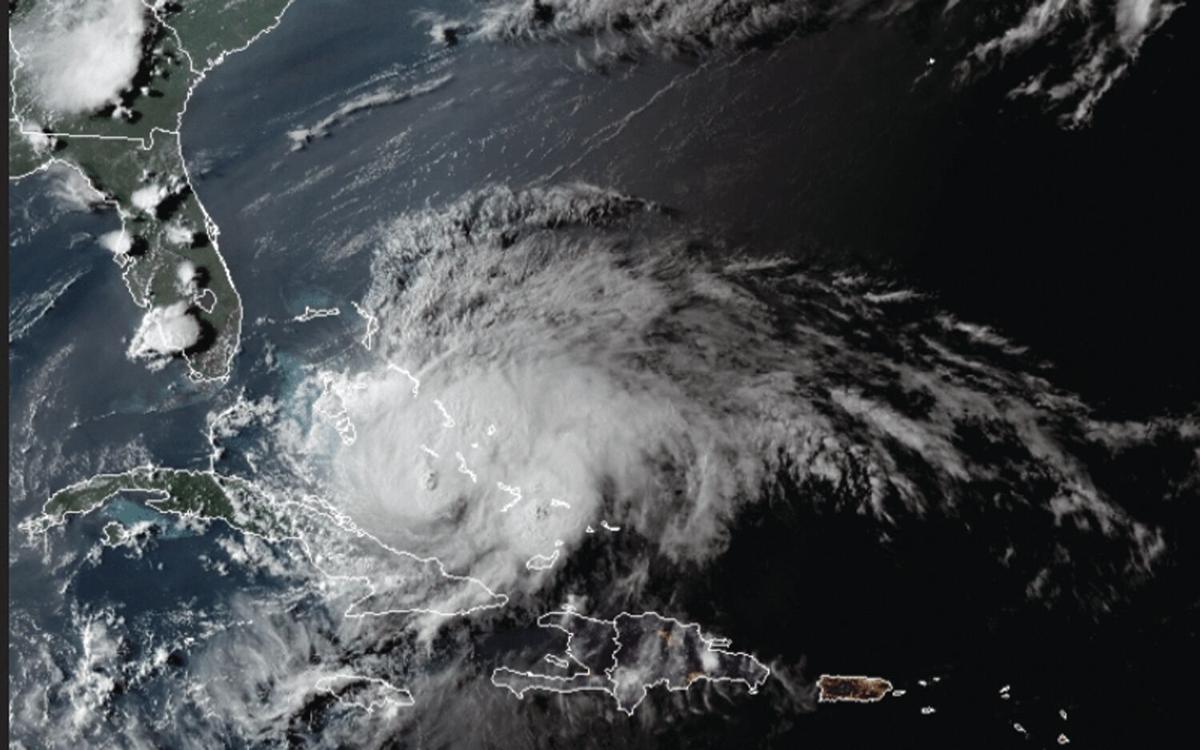 This satellite image shows Tropical Storm Isaias approaching the Florida coast on July 31. It is now heading up the East Coast and is forecast to reach New Hampshire by Tuesday night. (NOAA PHOTO) 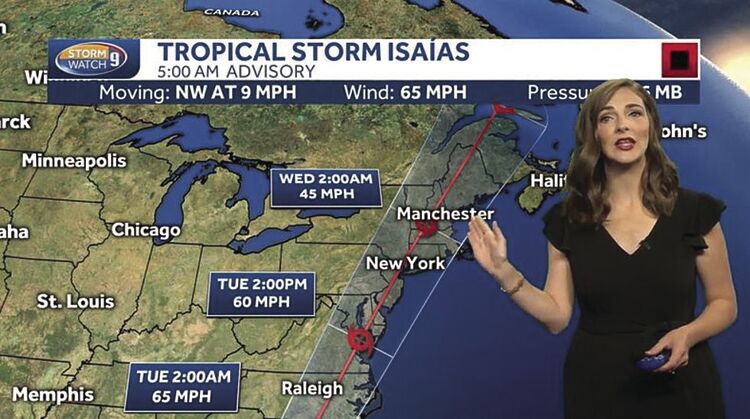 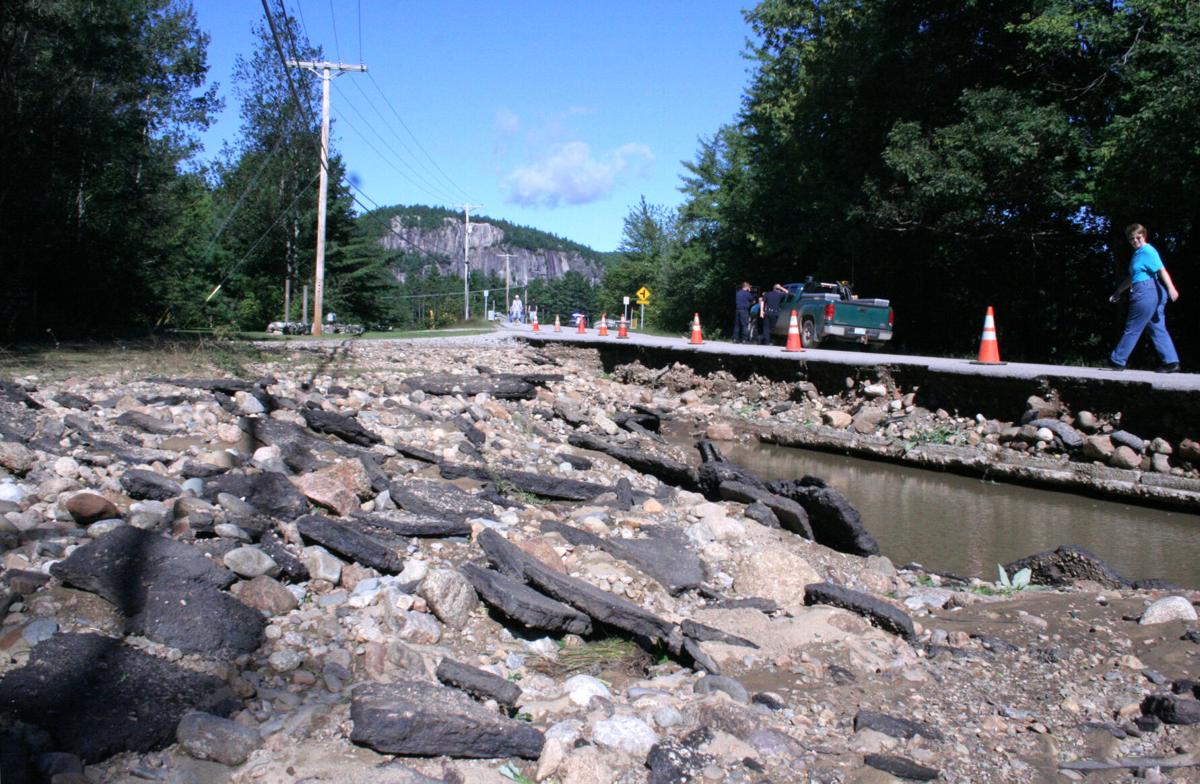 Tropical Storm Irene in 2011 washed out a stretch of Route 302 in Glen. (JAMIE GEMMITI PHOTO) 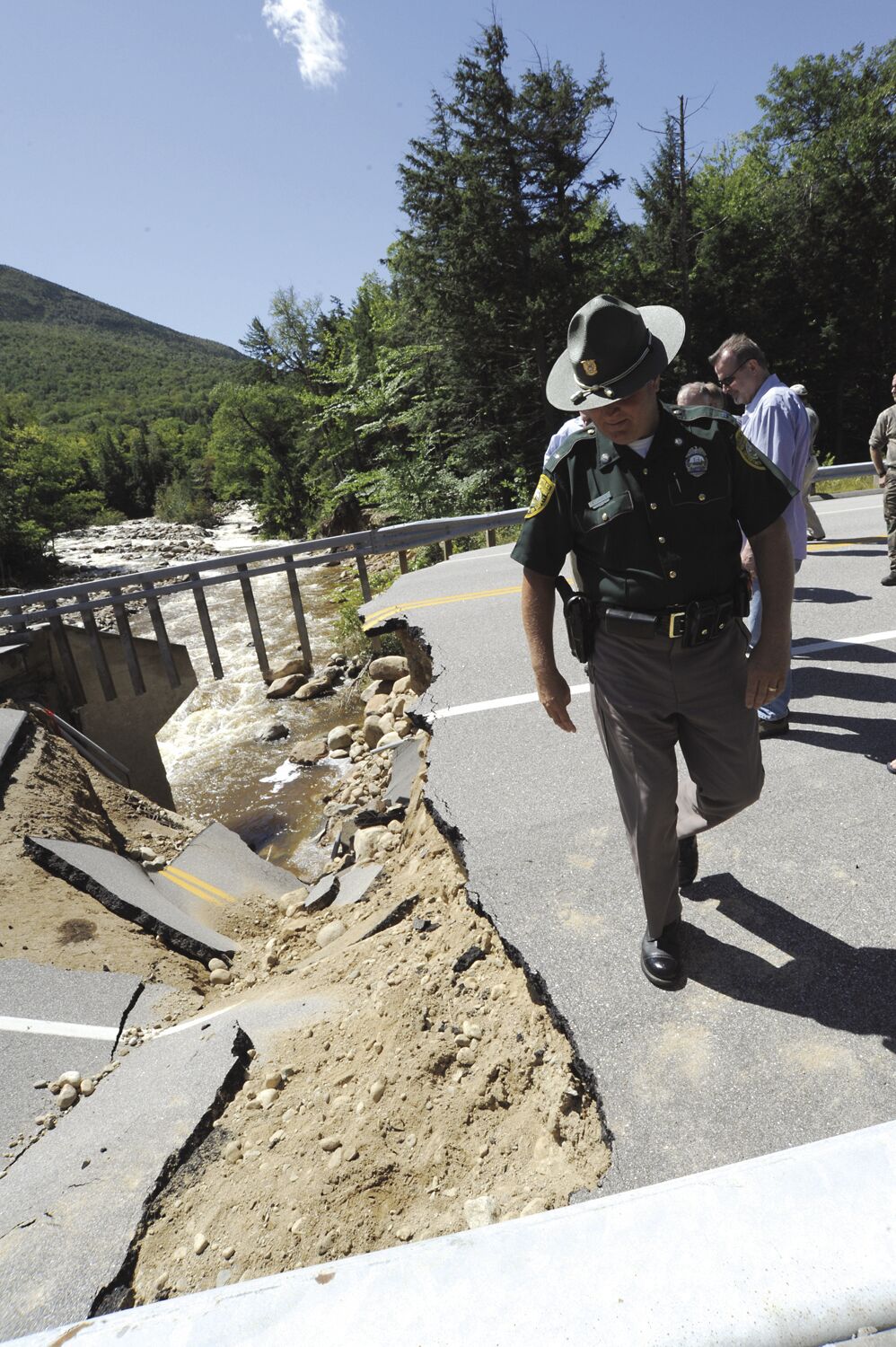 Tropical Storm Irene in 2011 washed out a stretch of Route 302 in Hart's Location. It took a month to repair the road. (JAMIE GEMMITI PHOTO)

This satellite image shows Tropical Storm Isaias approaching the Florida coast on July 31. It is now heading up the East Coast and is forecast to reach New Hampshire by Tuesday night. (NOAA PHOTO)

Tropical Storm Irene in 2011 washed out a stretch of Route 302 in Glen. (JAMIE GEMMITI PHOTO)

Tropical Storm Irene in 2011 washed out a stretch of Route 302 in Hart's Location. It took a month to repair the road. (JAMIE GEMMITI PHOTO)

CONWAY — The National Weather Service has issued a tropical storm watch for all of New Hampshire as Tropical Storm Isaias (pronounced EE-SA-EE-YAS) makes its way up the East Coast from South Carolina.

That means that winds between 39-73 mph are possible anywhere in the state within the next 48 hours.

Isaias will be the first tropical storm to hit New Hampshire since Tropical Storm Irene inflicted major damage in 2011.

They also want to remind area restaurants that have been doing outdoor dining due to the COVID-19 pandemic that if their tents can’t withstand at least 30 mph wind gusts, they should be taken down and secured.

According to the National Weather Service in Gray, Maine, as of Monday morning, Isaias was making its way up the southeastern U.S. with maximum sustained winds of 70 mph. It was expected to strengthen into a hurricane before making landfall in the Carolinas Monday night.

In terms of our area, WMUR-Channel 9 reported Monday “there could be wind gusts at the coast and in the Mount Washington Valley to over 50 mph” and 2-4 inches of rain. The center of the fast-moving system, coming up from western New York State, is forecast to reach New Hampshire tonight before moving away Wednesday.

The report added: “There is a chance of strong thunderstorms as the tropical storm passes through, and those embedded storms could feature locally heavy rain, gusty winds and lightning.”

According to the American Red Cross, “The Atlantic hurricane season, which runs from June 1- Nov. 30, is off to a busy start. Two tropical storms, Arthur and Bertha, developed before the official start date.

“Following were Tropical Storms Cristobal, Dolly, Edouard, Fay, Gonzalo and Isaias — the earliest ‘I’ storm on record — and Hurricane Hanna. The National Oceanic and Atmospheric Administration’s Climate Prediction Center in May had forecast a likely range of 13-19 named storms, with six to 10 possibly becoming hurricanes, for the 2020 season.”

Despite the virus, Burns and Leavitt are making emergency shelter contingencies, though a specific location hasn’t yet been announced.

“COVID absolutely doesn’t stop because of wildfires out west, earthquakes in Alaska or a hurricane on the East Coast,” Burns said, adding, “We’d rather everyone be overprepared than underprepared.”

Burns shared a pre-storm checklist for residents and visitors.

“Refill any medications that may be needed in the next few weeks,” she said. “Top off your gas tank in your car(s). Keep your phone fully charged at all times. Secure all lawn furniture and outdoor toys. Take photos/video of your home, inside and outside. Include a pictures/video of your special family photos as well. Put all important paperwork in zippy bags and keep it in a safe place.”

“Pets ... plan ahead for them as well. They need their own ‘go bag.’ Please include a crate (if available), blanket and or cozy toys, a leash, bowl for water and zippy bags of food and water for three days,” Burns said.

For more information on emergency preparedness, go to ​readynh.gov​.

On Aug. 28, 2011, Irene made landfall in New England. The storm — among the 15 costliest tropical systems to hit the U.S. — blew into Mount Washington Valley and left power outages, downed trees and road washouts in her wake.

In Bartlett, several people, including a family staying at Glen Ellis Campground, had to be rescued from rising waters, and a house at the corner of Jericho Road and Route 302 was tipped over.

Shelters were opened at the Glen Fire Station and Josiah Bartlett Elementary School for those who had to evacuate their homes.

In Conway, Artist Falls Road and West Side Road were closed.

By 4:30 p.m. on that day, then-local weather observer Briggs Bunker said North Conway had received 3.55 inches of rain. The Saco River was above flood stage at 10 feet and still rising.

Hundreds of thousands of customers statewide lost power due to Irene, including 675 customers in Conway and 600 in Madison.

The storm caused severe damage in Crawford Notch, washing out pavement on Route 302 at the Sawyer River Bridge and in front of the state’s Willey House site.

Route 302 had to be closed for a month after a stretch of road was washed away.

“We take all of these storms seriously and urge the public to do so, too,” Burns said by phone.