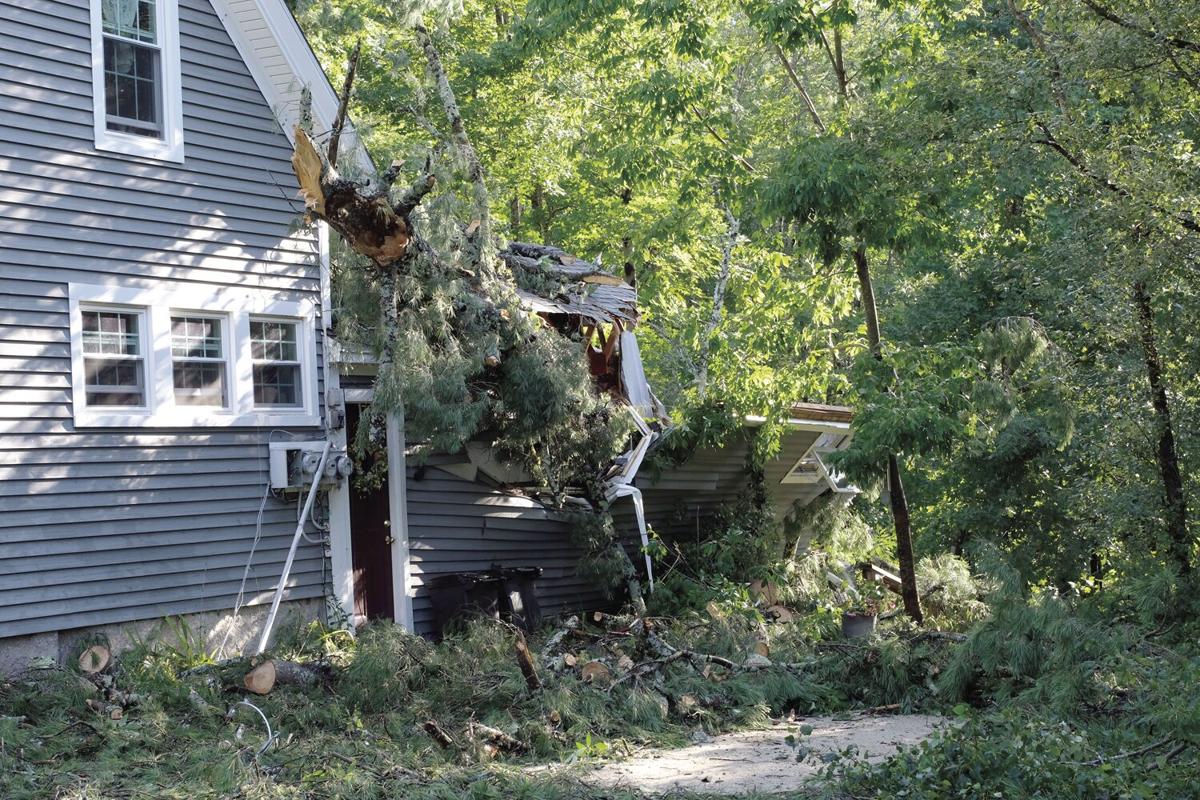 The scene of a tree that crushed an apartment and killed the resident at 655 Kearsarge Road in North Conway. (JAMIE GEMMITI PHOTO) 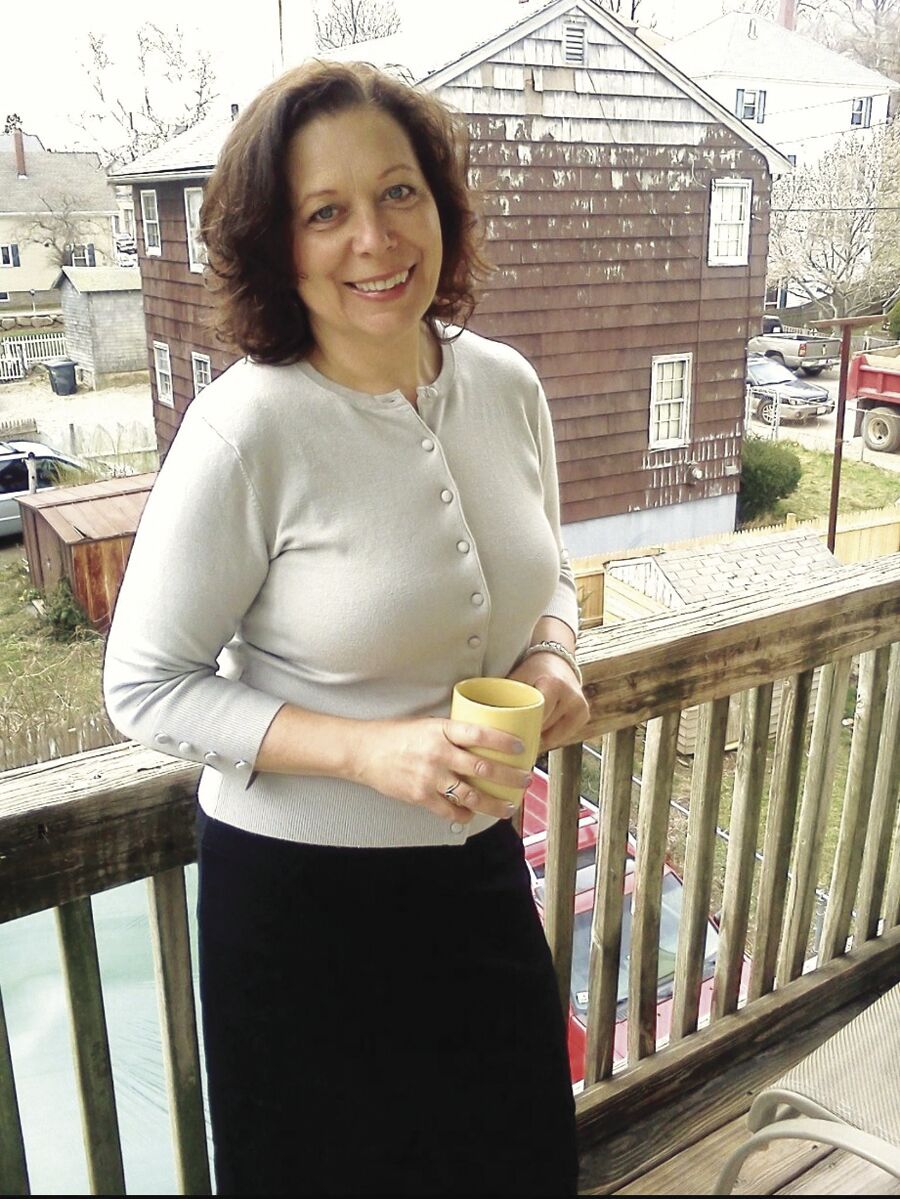 Joyce "Missy" Roberge is seen in Gloucester, Mass., in 2012 in this photo provided by her family. Roberge was killed Tuesday night as a result of Tropical Storm Isaias' high winds. (COURTESY PHOTO) 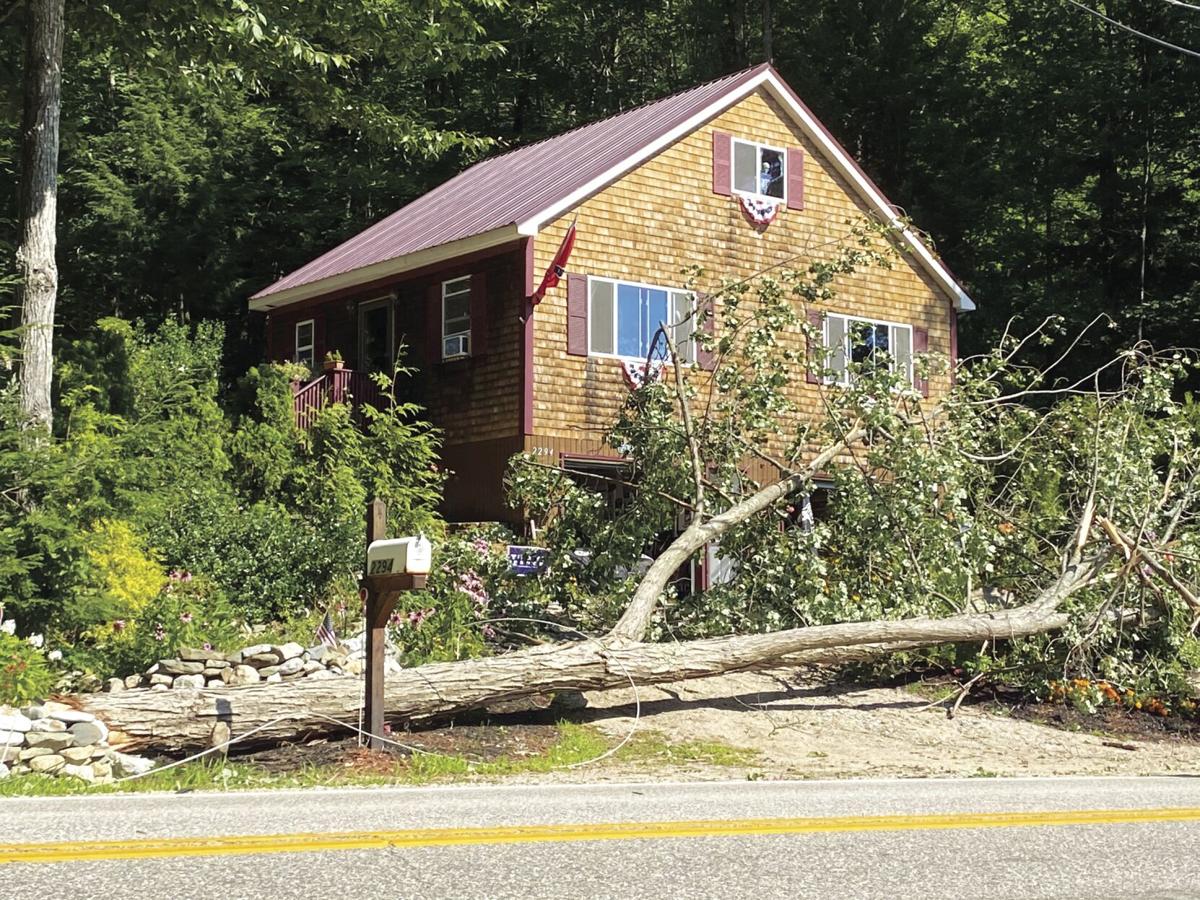 Tropical Storm Isaias knocked down a tree across the driveway of Roy and Cathy Alley in Eaton on Tuesday night. (TERRY LEAVITT PHOTO) 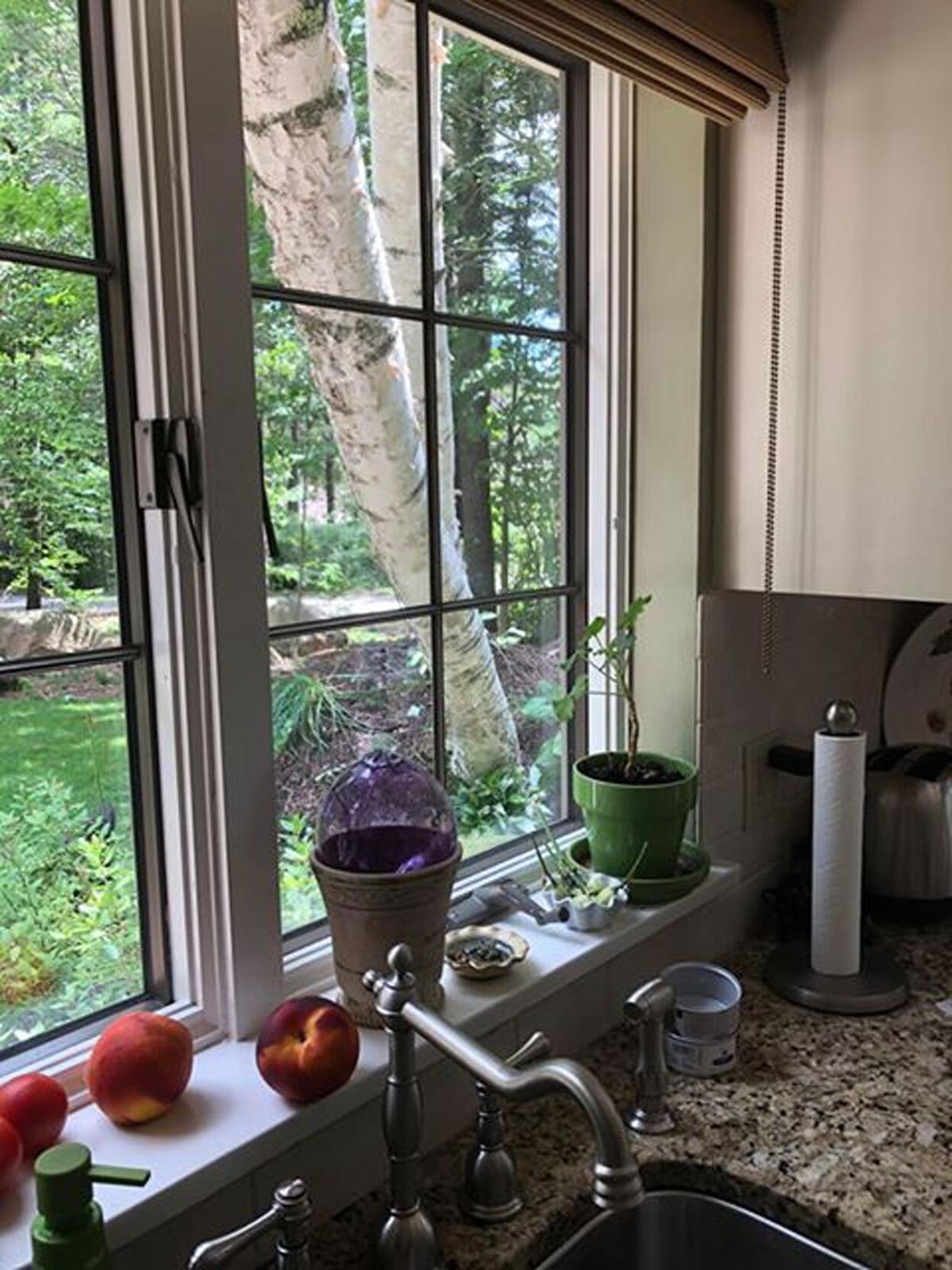 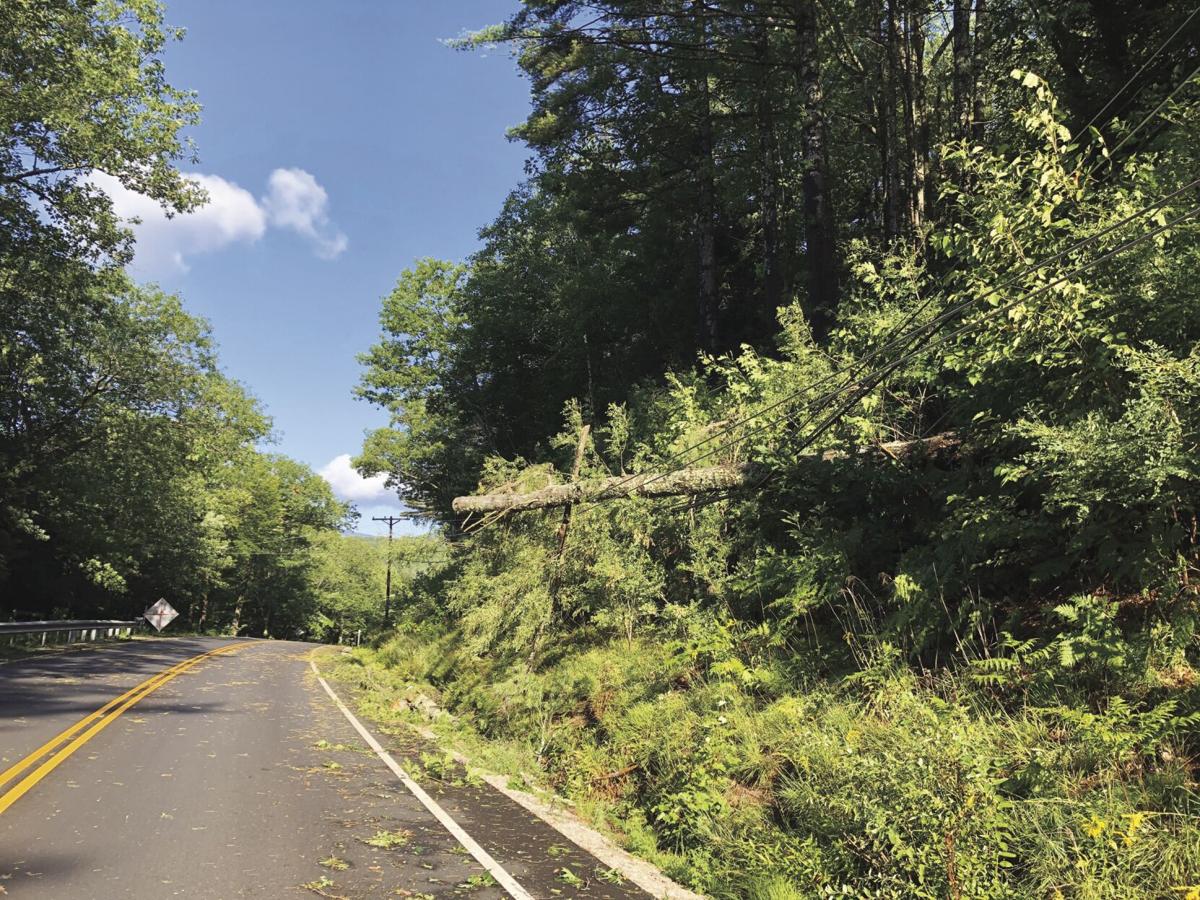 This tree, seen resting Wednesday on power lines on Route 16 in Jackson, was one of several  blown down by the storm, cutting power townwide. (MARGARET McKENZIE PHOTO) 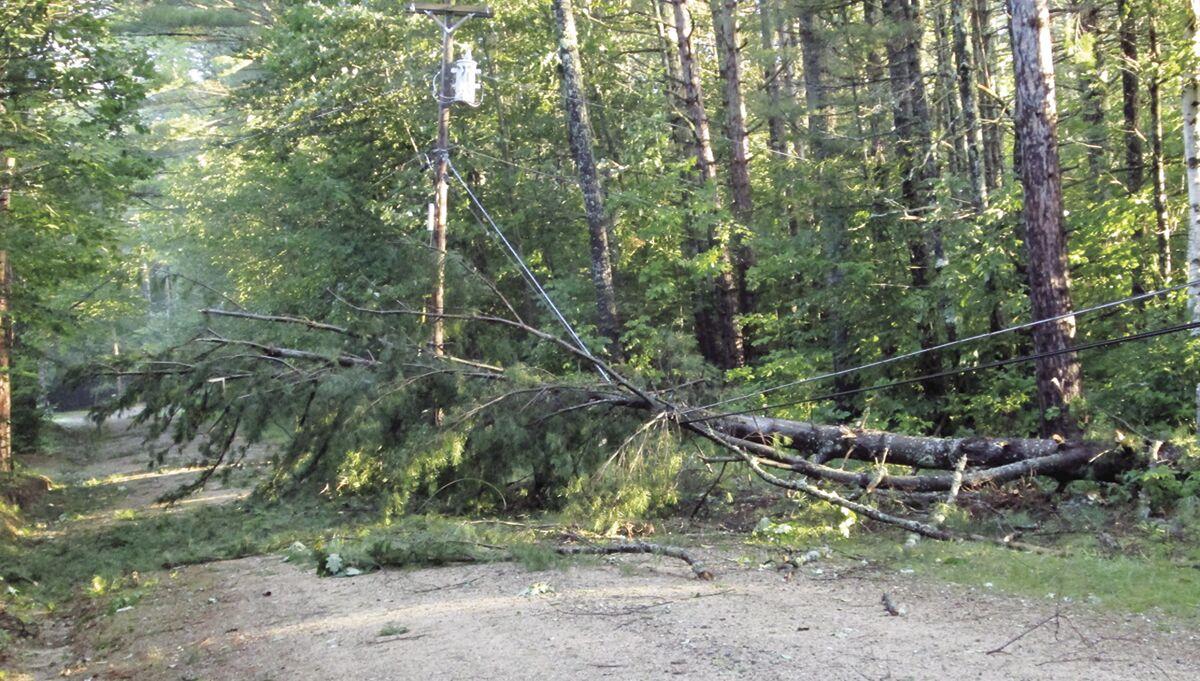 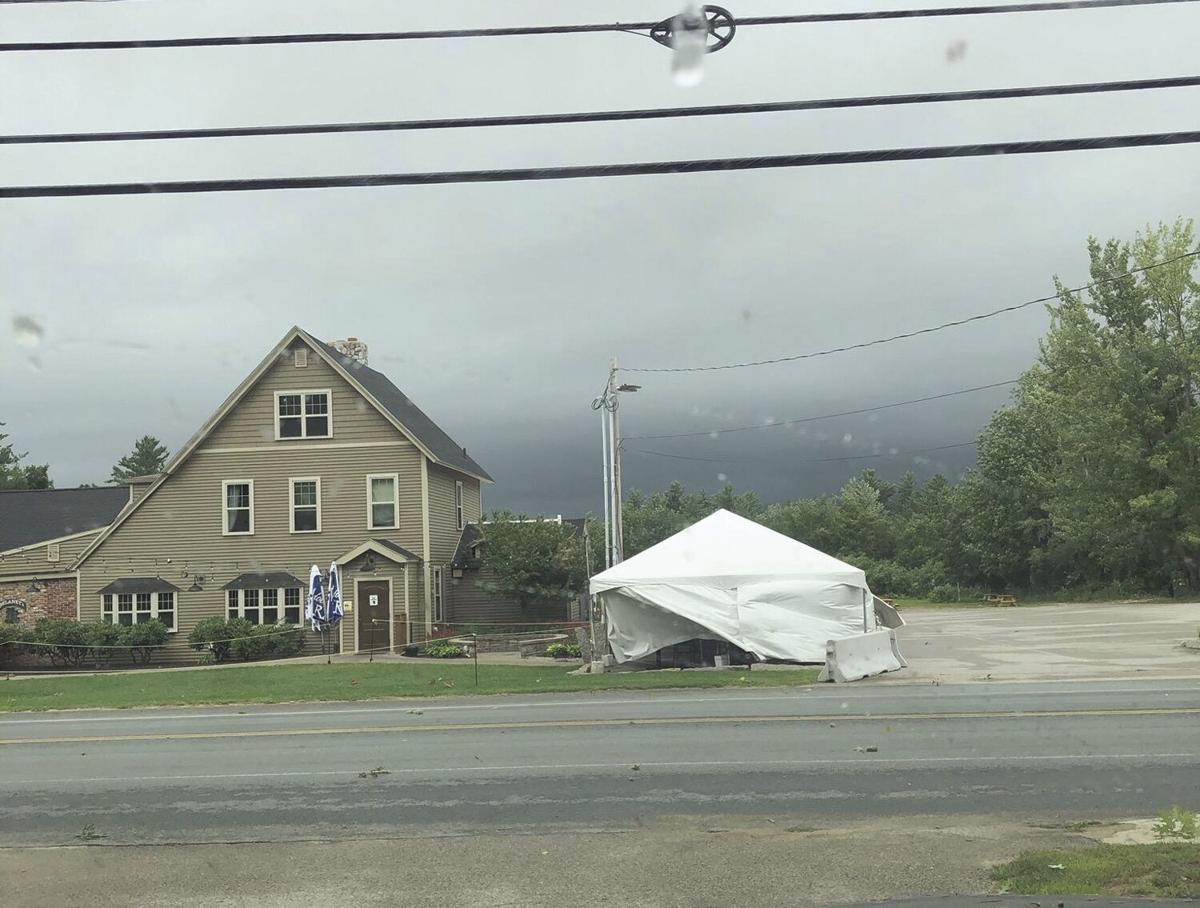 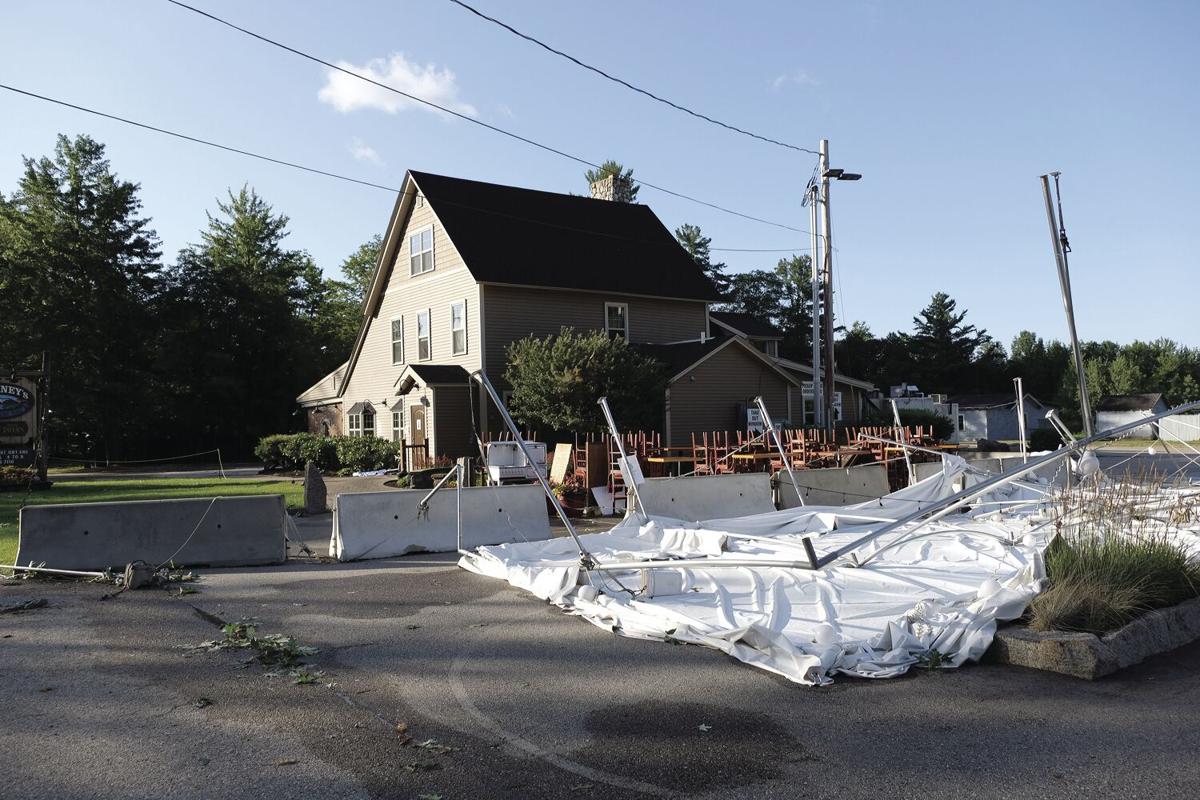 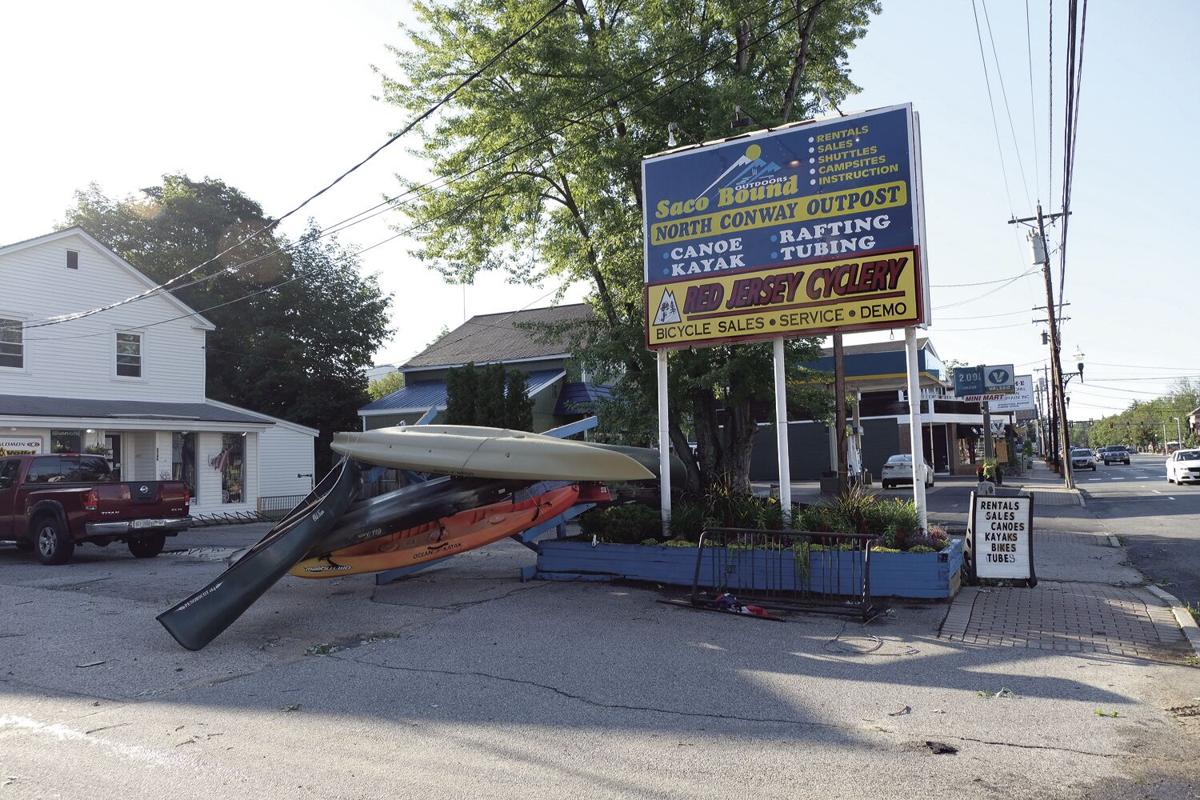 The scene of a tree that crushed an apartment and killed the resident at 655 Kearsarge Road in North Conway. (JAMIE GEMMITI PHOTO)

Joyce "Missy" Roberge is seen in Gloucester, Mass., in 2012 in this photo provided by her family. Roberge was killed Tuesday night as a result of Tropical Storm Isaias' high winds. (COURTESY PHOTO)

Tropical Storm Isaias knocked down a tree across the driveway of Roy and Cathy Alley in Eaton on Tuesday night. (TERRY LEAVITT PHOTO)

This tree, seen resting Wednesday on power lines on Route 16 in Jackson, was one of several  blown down by the storm, cutting power townwide. (MARGARET McKENZIE PHOTO)

CONWAY — Tropical Storm Isaias, the first tropical storm to hit the Granite State in nine years, turned deadly when a North Conway woman was killed by a large tree that crashed onto her second-floor apartment on Kearsarge Road on Tuesday night.

The storm, which barreled up from New York state and through Vermont north to Canada, left in its wake thousands of Granite Staters without power. It also closed several roads and even set a record for Mount Washington of the highest wind gust ever recorded in the month of August.

According to Lt. Chris Mattei, at 7:15 p.m. the Conway Police Department Dispatch Center received a call from 655 Kearsarge Road, where a woman told them a tree had fallen on her three-apartment building.

“The woman reported that she was trapped inside her basement apartment,” Mattei said. He said rescue personnel were able to get the woman out of the basement apartment, then learned that another woman was in the second-floor apartment at the time the tree fell on the building.

That woman was identified as 60-year-old Joyce “Missy” Roberge.

Mattei said she was dead by the time the rescuers found her and that the New Hampshire Medical Examiner’s Office will be conducting an autopsy in order to determine the exact cause of death.”

Roberge worked as an accountant for Attitash Mountain Services, according to LinkedIn.

A statement from her family said:

“Her friends knew her as Missy. She grew up on Willard Street in Berlin, Class of 1978, president, very pretty, popular and kind to everyone. She was wild and quirky, a seeker of spiritual truth and wisdom.”

Roberge, they said, “had three children, Rebekah, Hannah and Micah, whom she adored. She loved connecting with people and with nature, regularly posting beautiful skies, stunning plants and wildlife that visited her yard by the river.

“She welcomed everyone to her home and always made too much food and insisted you take some home.” Roberge, her family said, “would listen to your problems for hours and was always supportive. She loved and accepted all of her children’s friends and chosen family as her own.”

Mattei said: “On behalf of the Conway Police Department, North Conway Fire and Rescue and Brewster Ambulance, I would like to offer our deepest condolences to the deceased’s family and friends.”

According to Conway Emergency Management Deputy Director Linda Burns, the National Weather Service was en route to the Intervale, Kearsarge and Glen area “to investigate reports of a microburst or a tornado.”

Gusts knocked out power from the New Hampshire Electric Co-op to Jackson, where 1,231 customers were still in the dark Wednesday morning.

“I think that’s pretty much everyone in town,” said Jackson Police Chief Chris Perley. “The upside is it’s the summer, not winter, and it’s not sweltering hot and humid.”

Perley attributed the widespread outage to a utility pole that snapped Tuesday night near the Riverwood Inn, knocking out a power substation near the Jackson Covered Bridge. Other trees were seen taking down lines along Route 16 near the Shannon Door Pub and further north, near Ridge Road.

Bartlett Road Agent Travis Chick said while Bartlett Village was spared any outages, parts of Route 16A and on Hurricane Mountain Road saw outages. Mount Surprise Road and Kearsarge Estates also had downed lines. Chick said he measured 1.5 inches of rain at his home in Glen.

According to Madison police, several roads were closed due to downed trees and utility poles, including Goe Hill, Bern Drive near Eidelweiss Drive and Little Shore Drive at West Bergamo.

Carroll County Sheriff’s Lt. Mike Santuccio said call logs indicate that most of the damage occurred in the Effingham, Freedom and East Wakefield area, but the Jackson/Bartlett Area also generated a lot of calls.

“I know we were really busy last night,” said Santuccio, adding that at one point, calls were stacked 132 deep.

Kearsarge resident Sarah Sullivan-Mallett said a “huge pine tree” fell at the road to her condo. It was cleared away by North Conway Fire Department.

“Village at Kearsarge has a lot of damage — we believe it was a micro-burst or tornado,” said Sullivan-Mallett. “It sounded like a freight train.”

Sullivan-Mallett, who is the president of the board at the Village at Kearsarge, said North Conway Fire Chief Pat Preece said it appears there was a microburst in Kearsarge because all the trees fell in the same direction. She praised Preece and the whole department.

Preece said members of his department worked around the clock responding to calls and clearing trees. He said the peak gusts in North Conway were estimated to be 80 mph.

“I can’t give them enough kudos,” said Preece of his firefighters. “They did a fabulous job.”

Conway resident Clay Groves said his rental property on Brookside Drive in Albany sustained “major tree damage.” Groves was thankful that nobody got hurt when a big maple tree took down other smaller trees and power lines and knocked them into the driveway.

In terms of businesses, most tents erected by restaurants to provide outdoor seating withstood the storm, but the one at Delaney’s Hole-in-the-Wall in North Conway wasn’t so lucky. The storm flipped it into the parking lot.

And the canoe/kayaks displayed on a rack outside Saco Bound in North Conway Village looked like they had been flipped around like bath toys.

Susan Marks, co-executive director of the Ossipee Lake Alliance, said that the storm tipped over docks and sent boats adrift. She saw this on Berry Bay in Freedom, where she lives and heard the same thing happened all over the lake.

In Eaton the storm knocked down a tree across the driveway of Roy and Cathy Alley on Route 153. The wind also snapped the Alleys’ flagpole, tipped over a screen house on their deck and took down a telephone pole.

Roy Alley, who has owned the property for 19 years and lived there for six, described it as being like a hurricane or tornado.

“It was an hour and a half, maybe two hours, I mean just a hurricane. I’ve never seen it like that here, never. And I’ve seen strong wind,” he said.

At one point, he said, “All of sudden, you could see blue sky. It was a big circle of blue sky like we were in the epicenter and the wind stopped. I said ‘Oh boy, I guess this is it,’ and then it started again. It was like the other edge. And that’s when the tree let go.”

Effingham Police Sgt. Ian MacMillan said there were trees, poles and wires down along 153 and Bonnyman Road area. Bonnyman Road is in Effingham and Wakefield.

During the peak of the storm, New Hampshire experienced 184,000 outages, while Maine reported 90,100.

According to police, the Conway Dispatch Center received over 25 calls for trees and power lines down between 7:15-10 p.m. Tuesday.

Seth Wheeler, spokesperson for NHEC, said, “We still have smaller outages remaining on our distribution system — a total of about 1,000 members are out in Conway, North Conway and Jackson area. All NHEC crews are working, along with contract line and tree crews. We expect to be substantially restored by Thursday night with smaller, scattered outages restored fully by Friday.”

According to police, the Conway Dispatch Center received over 25 calls for trees and power lines down between 7:15-10 p.m. Tuesday.

The National Weather Service reported a maximum wind gust of 39 mph in Fryeburg, Maine, and 46 mph in Pinkham Notch. Portsmouth recorded the largest ground gust in the Granite State at 51 mph.

Tropical Storm Isaias also found the Rockpile, with a peak gust of 147 mph recorded on Mount Washington, the “home of the world’s worst weather.”

According to the National Weather Service, “it’s the highest wind gust ever recorded at the summit in the month of August.”

It added that “the storm knocked out the main and secondary internet services at Mount Washington Observatory, but workers were still able to publish brief text-based posts on Facebook to indicate the outage had occurred and what the top wind speed was.”

The strongest gust ever recorded at Mount Washington occurred April 12, 1934, when a 231-mph gust was recorded at the summit.

Wednesday was the calm after the storm as blue skies and low humidity took center stage. “A fairly nice stretch of weather coming up with temperatures running near or just above normal,” the National Weather Service in Gray, Maine, posted.