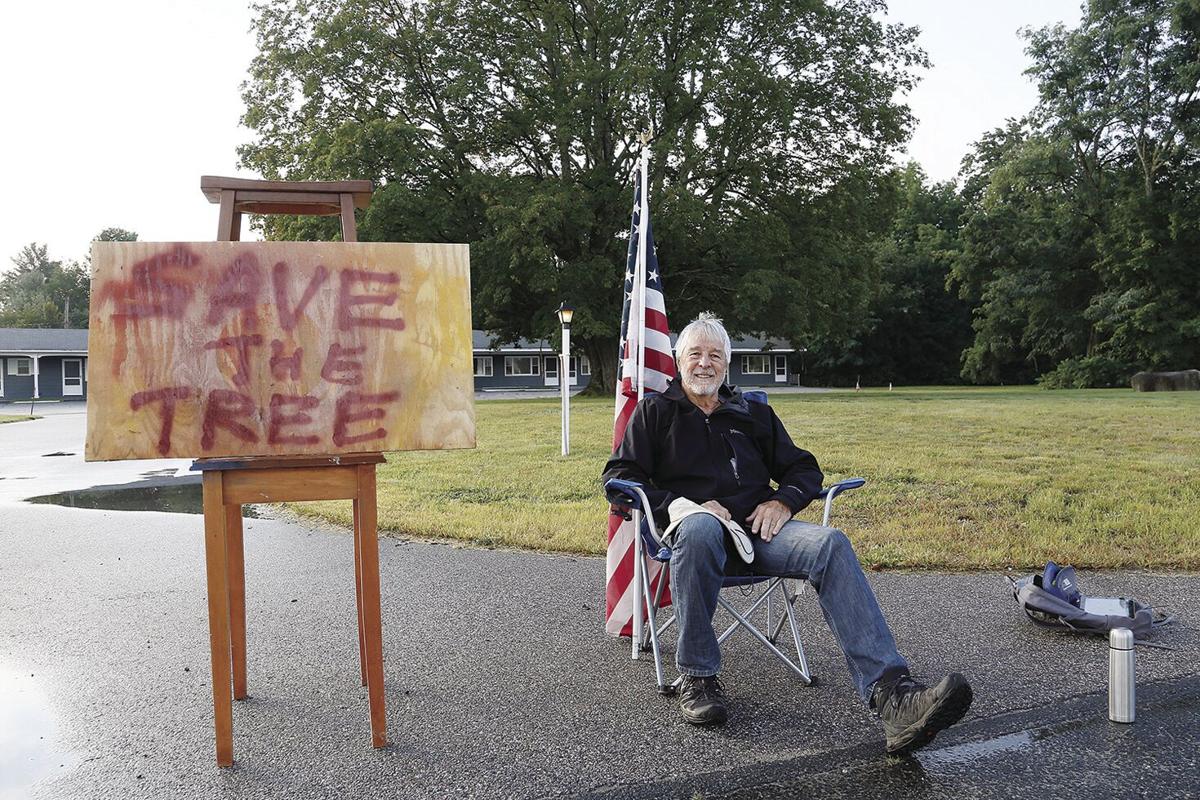 Intervale resident Jeffrey Shutak sits with a sign and an American flag in front of the large maple at the Intervale Motel on Monday morning. He vowed he would chain himself to the tree before developers take it. (RACHEL SHARPLES PHOTO) 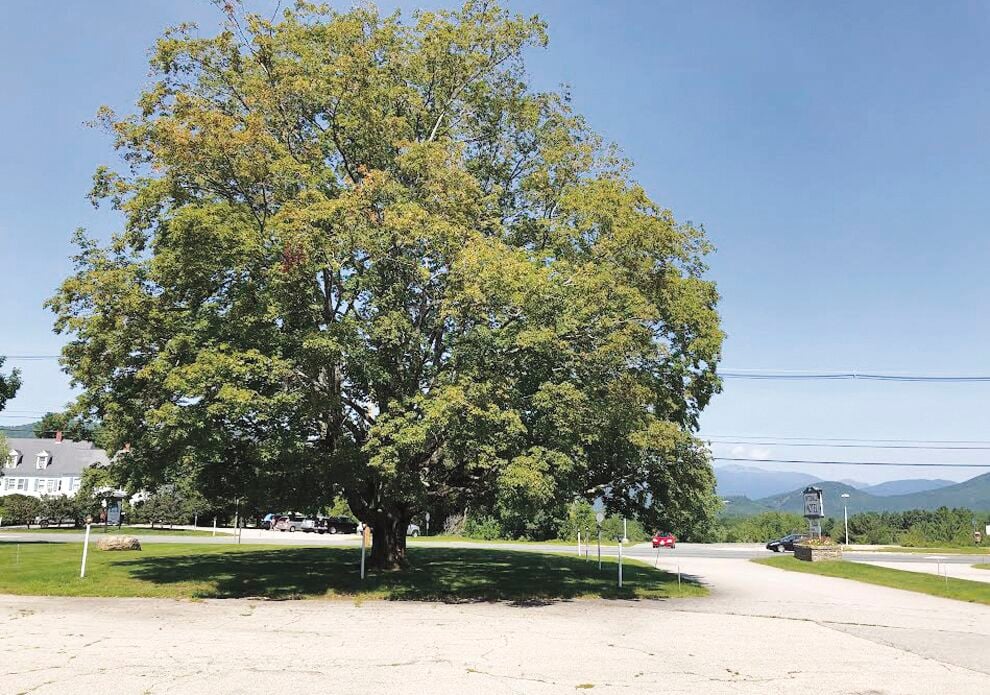 The stately maple across from the Intervale Scenic Vista’s days are numbered, says a representative of Viewpoint LLC, the developers planning a three-story hotel on the site. (MARGARET McKENZIE PHOTO)

Intervale resident Jeffrey Shutak sits with a sign and an American flag in front of the large maple at the Intervale Motel on Monday morning. He vowed he would chain himself to the tree before developers take it. (RACHEL SHARPLES PHOTO)

The stately maple across from the Intervale Scenic Vista’s days are numbered, says a representative of Viewpoint LLC, the developers planning a three-story hotel on the site. (MARGARET McKENZIE PHOTO)

CONWAY — Jeff Shutak is so opposed to the planned taking of a large maple at the proposed Viewpoint North Conway hotel project in Intervale, he says he’ll chain himself to the tree when the removal crew comes.

“I am so passionate about this that I am ready to chain myself to the tree when the bulldozer comes,” Shutak said Monday as he protested in front of the tree that stands in front of the now closed 16-room Intervale Motel. where the three-story, 98-room, 59,412-square-foot Viewpoint is proposed.

“Part of what I do as a mountain guide for Redline Guiding is to take people into the woods and show the effect on them of being in nature and the trees,” Shutak said.

“I don’t want to see anything like this tree go by the wayside and chopped up — I look at old photos of the Intervale House Hotel (1868-1923), and I see this tree off to the right. It’s a magnificent maple,” said Shutak, who said he plans to be back at his sit-in Friday and next week as well.

He has to guide a client Thursday but plans to join other members of the Intervale Neighbors Group on Thursday night when the Conway Planning Board meets at 7 p.m. to continue site-plan review of the proposed hotel.

That meeting will be held at the Marshall Gym at Conway Rec Center in Conway Village. At the board’s Aug. 26 meeting at Conway Town Hall, officials continued it to this Thursday due to crowd capacity concerns.

An estimated 45-plus people were outside waiting to come in, exceeding the meeting room’s 30-person limit, according to Town Manager Tom Holmes.

A retired finance department employee at Memorial Hospital, and a 30-year resident of Dinsmore Road (located behind the Intervale Post Office), Shutak, 77, has written letters to the Sun in support of saving the tree, which he says is a historic landmark.

Josh McAllister, project engineer of HEB Engineers of North Conway, who has represented his client Viewpoint at meetings, confirmed the tree is planned to be removed.

Despite the neighbors’ feelings about the tree, “There are no plans to save the tree as part of the proposed design,” McAllister told the Sun Tuesday.

Following public outcry about the size of the project back in February, developers scaled back their design from 105 rooms to 98, and from 105,836 square feet to 59,412 square feet.

McAllister said a proposed restaurant has now been combined with a proposed rooftop lounge and will not require additional parking because it will be open only to hotel guests.

He said Viewpoint North Conway LLC consists of developers from Massachusetts. They have not been present at any site plan reviews by the planning board.

McAllister said both the original and revised plans fell within town regulations. The original one called for a building height of 54.5 feet, just under the town’s height limit of 55 feet, and the new plan calls for a 51.5-foot height.

Shutak and others contend the proposed hotel is too large for the site.

In regards to the tree, he says the tree’s root system no doubt extends out farther than the height, which he estimates at 75 to 100 feet high.

“The roots are at least out to the road (Route 16) and out to the cross-country ski trail and under the current motel. And were they to say they would build around it would not work either as when you start digging around the root system, you will kill it,” said Shutak.

He said he has gotten tons of support from passers-by with people honking their horns and giving him a thumbs up.

“One woman brought me lunch; another lady — Janet DeForge, who wrote a letter to the Sun last week about the tree — is a painter, and she is making me a more readable sign,” said Shutak, whose original sign consists of a piece of plywood spray-painted with “Save the Tree” in red.

“A hiking client of mine who lives in Connecticut asked me if the tree had a name — I told her I had not named it, and she said it deserved one, so she christened it ‘Harmony,’ as in ‘harmony with the Earth,’” Shutak said.

Shutak was one of 22 residents (three of whom are direct abutters) who signed a nuisance complaint that was submitted to the planning board Feb. 25 by attorney Roy Tilsley Jr. of Bernstein Shur of Manchester.

The complaint has been updated and was resubmitted to the planning board prior to the Aug. 26 meeting, said Colleen Arons, a member of the neighbors group.

In addition to Shutak, signers are direct abutters Nancy Goyette, Jenny LaBudde and Mike Specht, all of the of Mountain View Estates Condo Association Board; and direct abutters Stephanie Madden and Frank Masciulli.

Other signers include James and Barbara Wood and Alan and Susan Leveille, all of Dinsmore Road; Courtney and James Wrigley and Deborah and John Ziegler, all of Neighbors Row; Rod Forsman and Mike Grant, both of Balcony Seat View; Dick Forbes and Maureen Westrick of Intervale Cross Road; and Elaine DiRusso of Northbrook Condominiums.

The group has established a Facebook page, Intervale Neighbors Group.

In letters published by the Sun over the past several weeks, they have been critical of a traffic study which found by Vanasse Hangen Brustin, Inc. of Bedford and South Portland that concludes that the “vehicular trips associated with the proposed (105-room, now 98-room) hotel would have negligible impacts to the adjacent roadway system during the weekday, AM, weekday, PM, and Saturday midday peak hours.”

Asked about enacting stricter zoning for the area, selectmen’s representative Steve Porter last month said that would not have any bearing on this project as the review has already begun.

“I think history is catching up with us (for actions we did not take as a town in the 1980s, ‘90s and early 2000s) as we were so concerned with activity on the Route 16 commercial strip,” he said.

For plans and the Sept. 9 meeting agenda, go to the planning board page at conwaynh.org.

If the gentleman loves the tree so much, perhaps he has 1.4 million dollars to save it. I love how people claim OTHER people's property as their own.