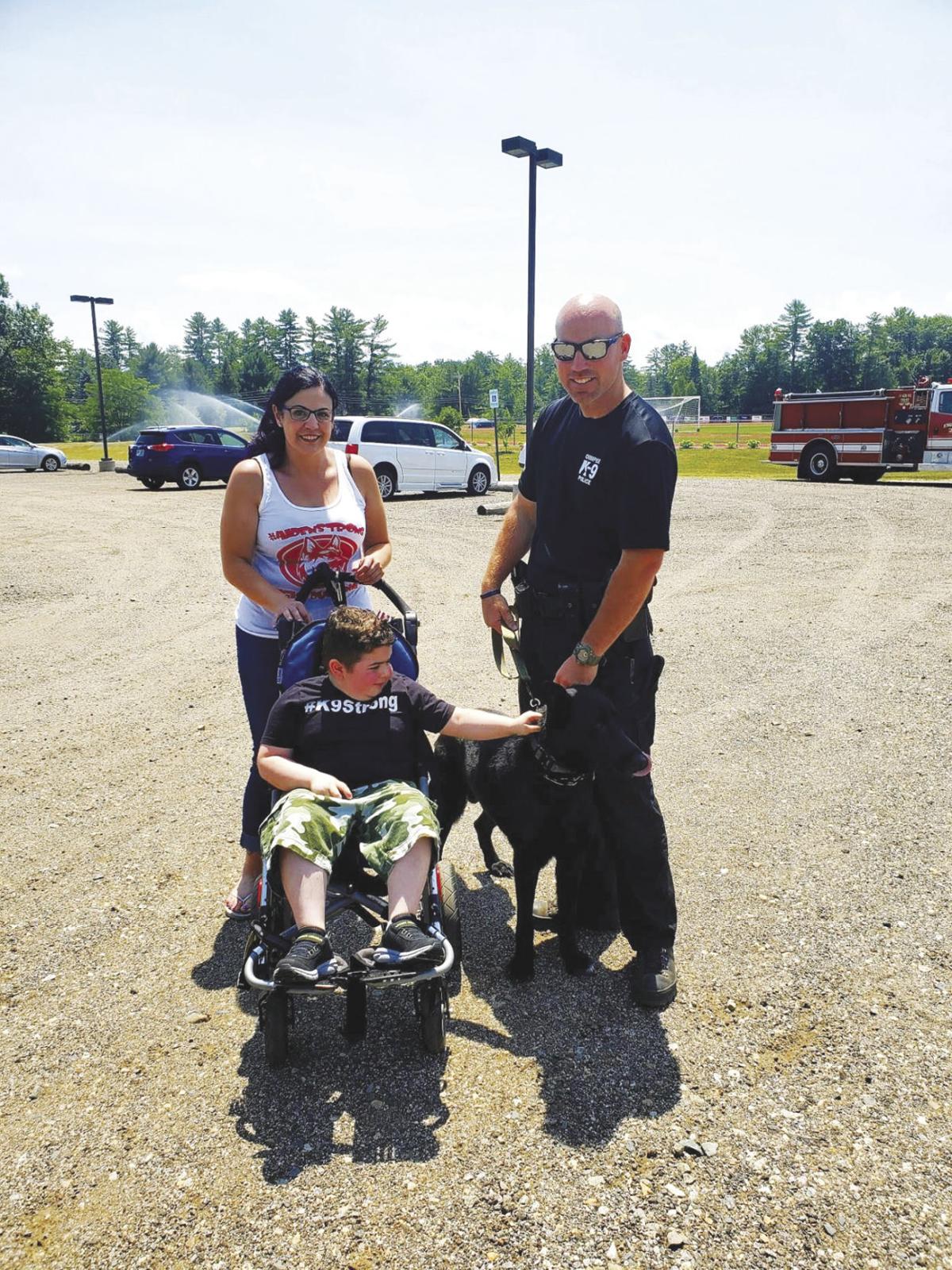 Aiden Moore and his mother, Jillian, meet with K-9 Atlas and his handler Sgt. Justin Swift in Wolfeboro July 9. Aiden Moore has been raising money to provide dogs like Atlas with protective vests. (COURTESY PHOTO) 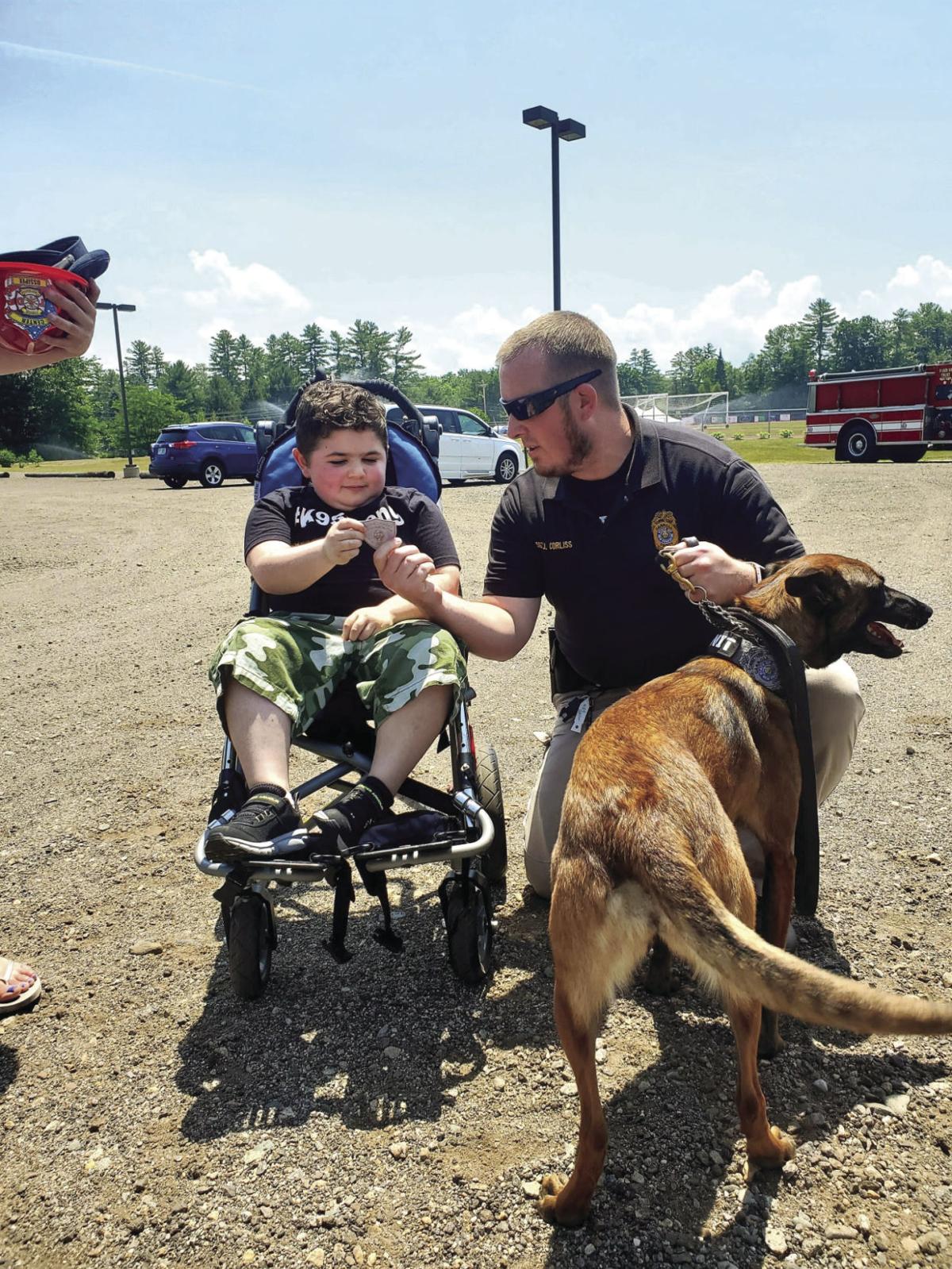 Aiden Moore and his mother, Jillian, meet with K-9 Atlas and his handler Sgt. Justin Swift in Wolfeboro July 9. Aiden Moore has been raising money to provide dogs like Atlas with protective vests. (COURTESY PHOTO)

WOLFEBORO — K-9 Atlas of Ossipee Police recently received a special gift from a boy who is raising money to equip furry officers with protective vests.

Aiden Moore, 8, has Duchenne Muscular Dystrophy, a degenerative muscle disease, but that hasn't deterred him from his work. So far, he's outfitted seven dogs from around the country with custom bullet and stab-resistant vests from LOF Defence Systems in Canada which cost $1,200 a piece.

On July 7, Moore and his mother Jillian Moore, came to the Nicholas J. Pernokas Recreation Park (The Nick) in Wolfeboro to meet Atlas, his handler Justin Swift and two other law-enforcement K-9s in Carroll County, Echo from Wakefield and his handler officer Matthew Martino, and Chloe and her handler Justin Corliss from the county jail.

Jillian Moore told the Sun that Aiden began following police dogs in 2018. While at a two-day doctor's appointment in Worcester, Mass., Jillian came across a viral video made by a K-9 handler in Indiana named Molly Groce.

"He really fell in love with her Instagram page because she's really funny," said Julian Moore. "It really got him through all the appointments."

The Moores reached out to Groce, and they established a friendship. Gross organized about 15 K-9 handlers from the county to greet him in December in Derry.

"Aiden had no idea Molly was going to be there, that was the big surprise," she said, adding Groce raised money to purchase a handicap-accessible van for the Moore family.

Since then, Aiden as been fascinated by dogs, said Moore. He learned of a police dog named Harley who died in the line of service, and that got him wondering if the dogs are vested, but it turned out that most departments can't afford the cost.

"He wanted to do this so the dogs would be safe," said Moore. "He is a very loving, kind boy."

Ossipee Police Chief Joe Duchesne met with Aiden at The Nick as well.

"The kid was so happy to see the dogs, the officers and all that good stuff," said Duchesne.

Atlas is a black German shepard who has been with the department for about a year. Duchesne was a K9 handler for seven years. The police were looking into getting a vest for Atlas when they heard about the opportunity to get one from Aiden.

"The vest would be used in more or less tactical situations or situations where there is an unknown danger if the suspect might have a weapon and things like that," said Duchesne.

"It sucks for the dog lovers to hear, and I'm one myself, that sometimes the dogs are the first ones in, and they can take the brunt of it. We need to do what we can to make sure they are protected."

Since January, the Moores have provided seven dogs with vests. To raise money, they sell merchandise — sticketrs, T-shirts, etc. — under the Instragram handle @Aidenstrong_.

On July 7, Aiden got to meet up with Atlas, Chloe and Echo. Moore said Atlas is the first vest recipient that Aiden has met.

Atlas was the fourth dog that Aiden raised money for. The other dogs are in California, Georgia, Nebraska, Tennessee and Washington state. Dogs are selected according to the financial need of the department they work for. They raise money for one dog at a time. The campaign for Atlas' vest took about two weeks.

"People are so supportive and amazing," said Moore.

Atlas had already gotten the vest in the mail from Lof Defence a couple weeks prior to the meeting.

"It was very heartwarming," said Moore. "This is the first time he got to physically meet one of the dogs he put a vest on. It was pretty cool."

During the visit at The Nick, the handlers showed Aiden how the K-9s can find hidden narcotics and then Aiden got to throw the dogs a ball, which is their reward.

Atlas even showed how tough he is by biting someone with a bite suit on.

Moore said her son follows the dogs on social media and wants to make sure they are happy and healthy.

"He knows the dogs' names, and he is really invested in their life safety," said Moore. "When he's around those dogs, he lights up."