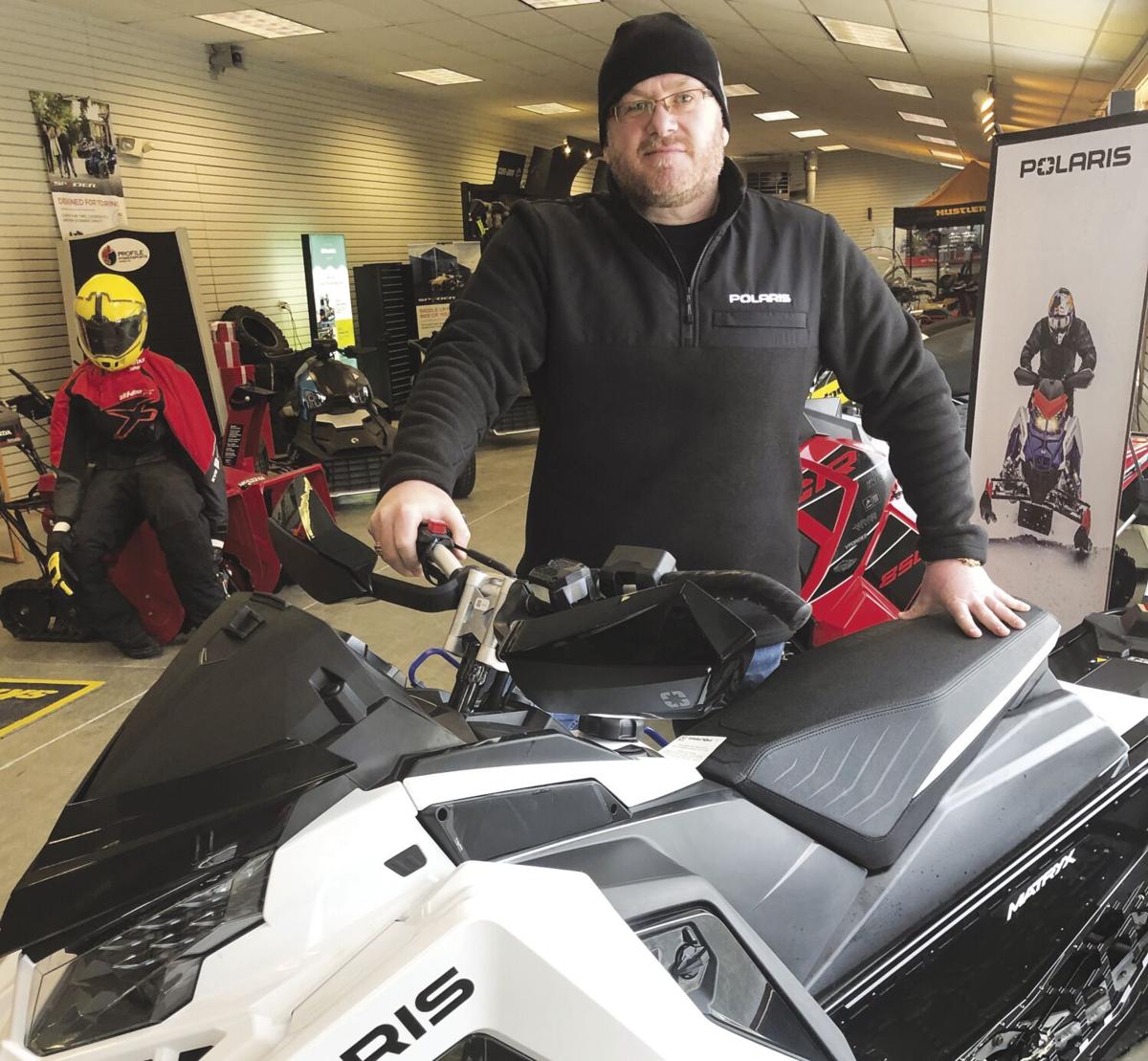 Mike Petell, 44, opened Profile Powersports inside Profile Motors in 1996. Today, the business has greatly expanded. Getting the Polaris snowmobile franchise for him is the icing on the cake. (TOM EASTMAN PHOTO) 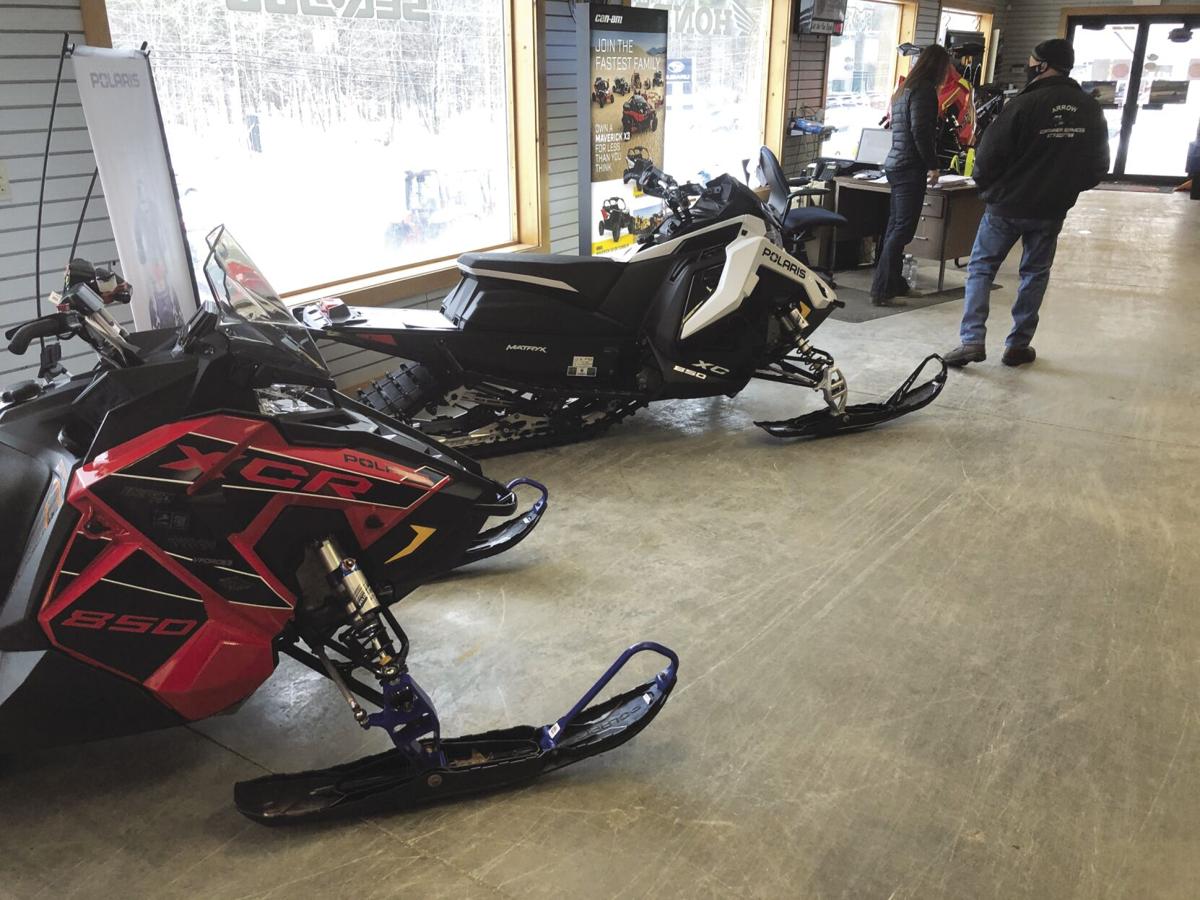 Polaris has joined the BRP and Honda machines in the showroom at Profile Powersports. (TOM EASTMAN PHOTO) 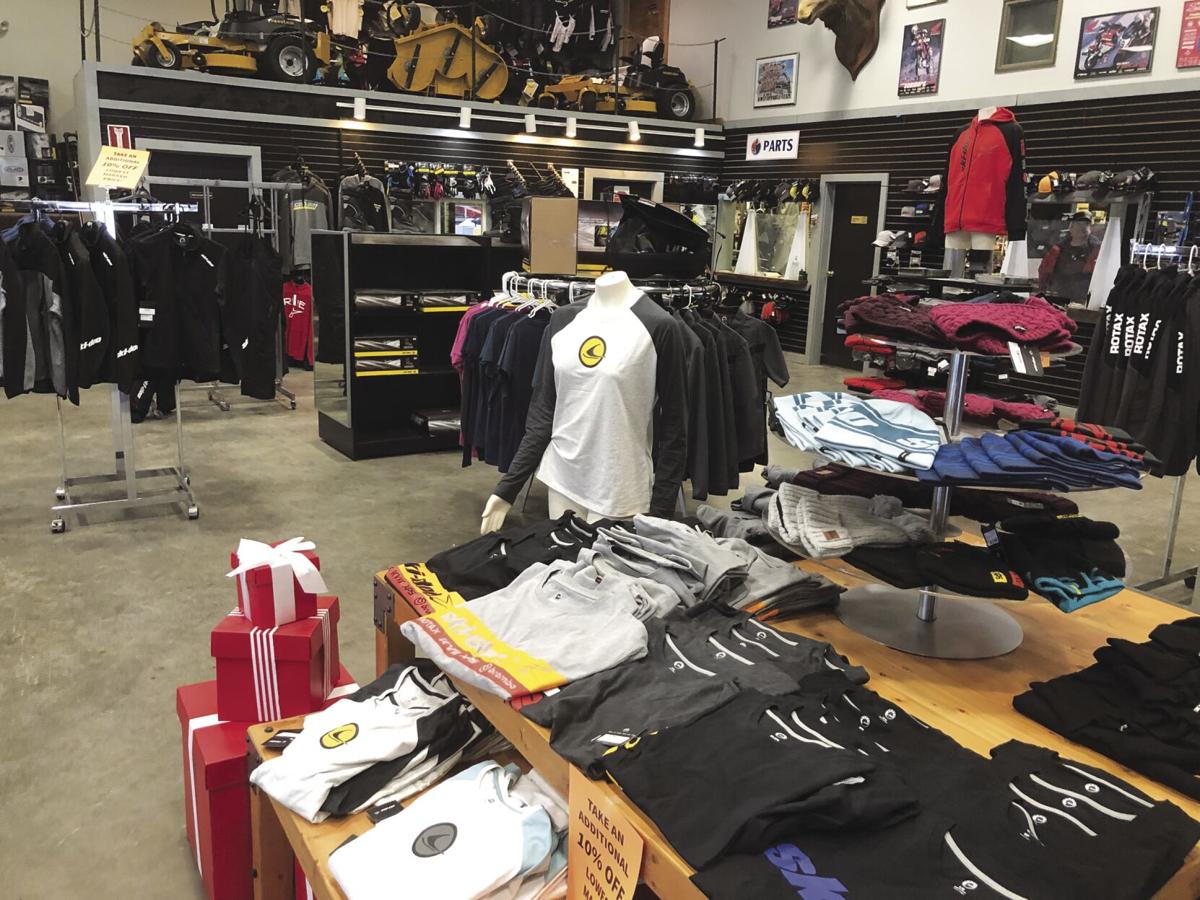 It's not just sleds in the showroom of Profile Powersports. Accessories and apparel are also available. (TOM EASTMAN PHOTO) 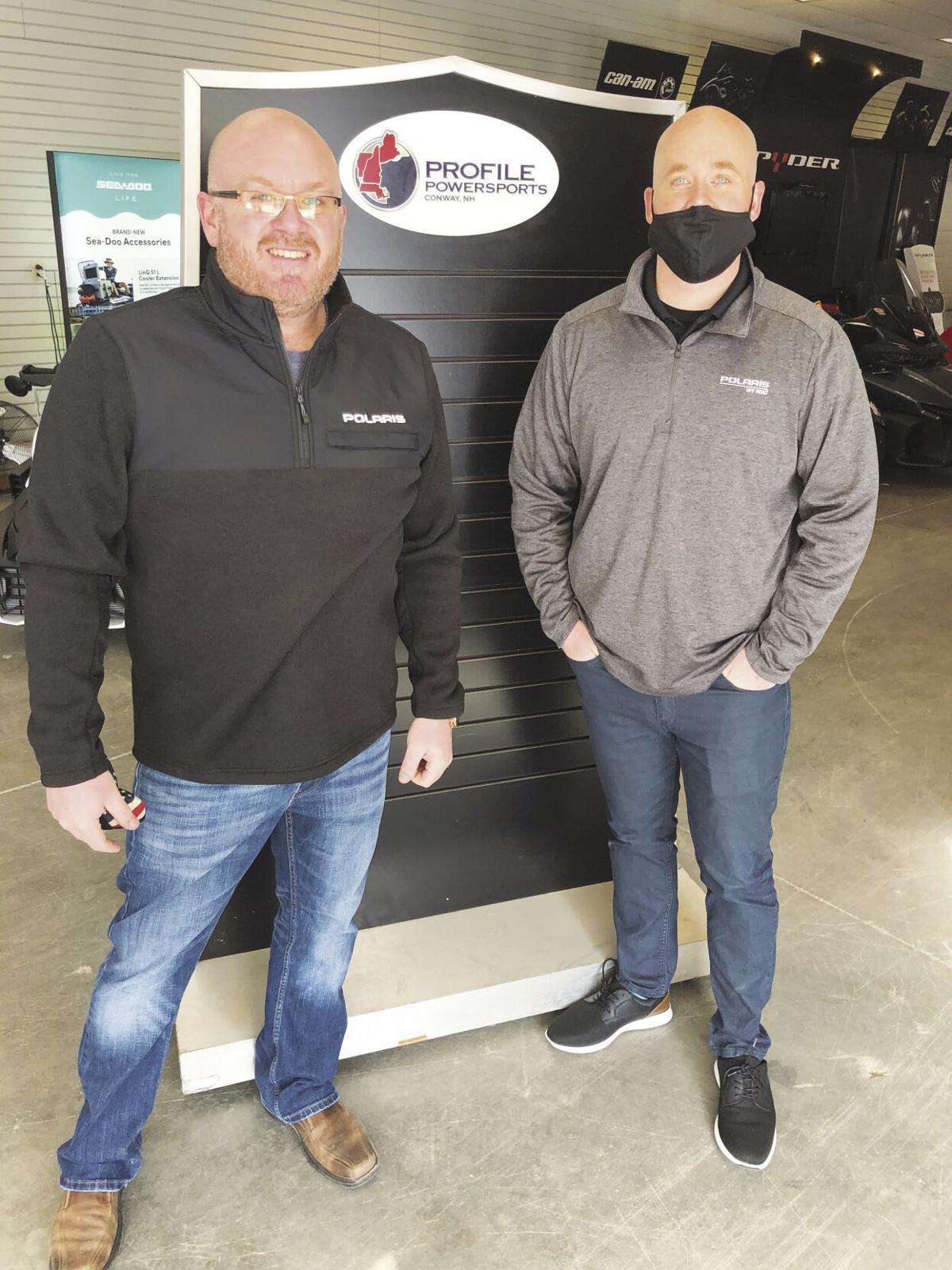 Mike Petell is seen with Polaris’ Ryan Deely in his showroom upon learning he got the Polaris franchise. (TOM EASTMAN PHOTO)

Mike Petell, 44, opened Profile Powersports inside Profile Motors in 1996. Today, the business has greatly expanded. Getting the Polaris snowmobile franchise for him is the icing on the cake. (TOM EASTMAN PHOTO)

Polaris has joined the BRP and Honda machines in the showroom at Profile Powersports. (TOM EASTMAN PHOTO)

It's not just sleds in the showroom of Profile Powersports. Accessories and apparel are also available. (TOM EASTMAN PHOTO)

Mike Petell is seen with Polaris’ Ryan Deely in his showroom upon learning he got the Polaris franchise. (TOM EASTMAN PHOTO)

CONWAY — With the greatly increased demand for outdoor activity in the past year due to the pandemic, the Great Outdoors are providing a much-needed outlet, especially for those hoping to experience the thrill of a ride on a snowmobile in winter or an all-terrain vehicle or watercraft in warmer months.

Keeping the demand satisfied by having enough inventory has been a challenge, as local retailers and rental outlets can attest.

Thus, there was jubilation at Profile Powersports of Conway when it learned on Feb. 19 it had been awarded the local Polaris franchise, opening up an array of equipment opportunities for customers to enjoy Polaris snowmobiles, ATVs and RZR Side by Sides to go along with Profile’s existing fleet of Ski-Doos, Sea-Doos, Honda motorcycle and ATVs, Honda generators, lawn mowers and BRP (Bombardier Recreational Products).

As a result, the retailer, which has been serving outdoor enthusiasts in Conway for 25 years, stands on the cusp of exciting new growth, note Profile’s Mike Petell and Polaris Retail District Manager Ryan Deely of Scarborough, Maine.

“We’ve been working on this deal since late fall,” said Petell in a recent joint interview with Deely. “We’re really, really honored to have Polaris come in and join us as a team.”

They’ll be doing Polaris sales, parts, accessories, service and finance, and are currently advertising for several positions, adding to the local outdoors economy.

Petell and Deely said a grand-opening celebration franchise will be held once life gets back to normal.

“I’m probably going to plan some sort of an event for the summer. You know, I want to see where COVID goes. Because obviously, the safety of the community is important,” said Petell.

With five new Polaris sleds on his showroom floor, Petell said he is running a 2022 Polaris Snow Check promotion, at which customers can order a 2022 machine now.

A Conway native and 1994 Kennett High graduate, Petell, now 44, is part of the Petell family of local entrepreneurs that includes his brother Dale, 48, operator of neighboring Profile Subaru, and parents Ron and Carlene Petell.

Ron and Carlene moved to the area in 1974 and had initially operated (with business partner Joe Alosa) Conway Truck Service in Center Conway. Ron was associated with GM for many years and opened Profile Motors dealership in 1985.

In recent years, with their father now 73 and wanting to slow down a bit, the family has been selling and consolidating businesses, including Profile Motors, which closed in November 2019.

That property at 38 Towle Road, near the junction of Route 16 and 112 (Kancamagus Highway) in Conway, was recently sold.

The family businesses have long been mainstays of the Mount Washington Valley, giving back to many causes, with Profile Subaru donating to Jen’s Friends, which provides financial assistance to local cancer patients.

Profile Powersports gives to the Conway Area Humane Society and other local non-profits and school fundraisers, as well as local snowmobile clubs Mountain Meadow Riders of Conway and Scrub Oak Scramblers of Madison.

“We definitely give back, and we’re happy to be able to do so,” said Petell, who has had a love for powersports since he was a little kid.

“I was on a dirt bike when I was 4 years old!” he laughed. “So that was my first experience with motorized wheeled vehicles, and from then I never looked back.

“I started buying my own dirt bikes and having a jobs at the dealership (Profile Motors). I bought my first snowmobile in 1993. We had it all: watercraft, four wheelers … it’s always been a passion of mine.”

In 1996, he founded Profile Powersports, which was at first located at Profile Motors.

Initially it was a BRP only dealer, offering Ski-Doo and Sea-Doo off-highway snowmobiles and watercraft, and later also adding Can-Am on-road Spyder and off-road products. They built the first rendition of the current building in 1998 and took on Honda products such as motorcycles, mowers, tractors and ATVs.

For many years, Profile Powersports offered a “Let’s Ride Rentals” operation for ATVs and snowmobiles in Gorham, and then snowmobiles and Spyder on-road vehicles at a satellite location before making the business decision to focus on sales and service at the Conway location.

Petell says Profile is located “at the Gateway to the North Country” — only an hour’s drive to Jericho State Park in Berlin, which is a hotbed for off-road enthusiasts.

“Jericho has really done a lot for the economy of Berlin and Gorham,” said Petell. “In my opinion, it kind of saved that region. Here in Conway, we are close enough to reap some of the benefits of having that trail system so close to us.”

“We’re right on one of heaviest traveled snowmobile trails in New Hampshire, Corridor 19,” he said.

“The Mountain Meadow Riders come down from the north and the Scrub Oak Scramblers come north from Madison. We service the area into western Maine and out through Evans Notch north into Gorham, and the other clubs down south come up from Ossipee and Wakefield.”

Speaking about local snowmobilers, Petell noted that the off-road community “brings and injects a lot of revenue into the economy, between gas and lodging and food and the purchase of the vehicles with the taxes and the registrations.”

He said in addition to Polaris products, his business will continue to offer BRP produxts (Ski-Doo snow machines, Sea-Doo personal watercraft models and Can-Am Spyder and off-road products), along with Honda side-by-sides and Honda power equipment (snowblowers, lawnmowers and generators).

Asked about Polaris’ stellar reputation in the snowmobiling industry, Petell said they are rugged, durable machines.

“They are a great value, built extremely well. Right now, their suspensions are one of the top in the industry, and they have a strong motor lineup,” he said, noting a new one like the white XC 850 in the showroom goes for about $15,000.

He added that when the Marr family, owners of Town & Country of East Conway, the former local Polaris dealer, opted to close this past October after 50 years in business, it created an opportunity for Profile to apply for the franchise.

“Town & Country had represented them well for years but decided to go in a different direction,” said Petell.

“Having Polaris is just going to bring in a whole new wave of customers through the door,” he said, adding, “Polaris has been in the area for many years, so there are many existing clients who we will continue to service.

He is advertising to add five new positions to the current workforce of 11 employees now that Polaris is coming onboard.

“We’re anticipating with the budgets I just ran that as long as supply can try to keep up a little bit, we should be able to increase our business between 20 and 25 percent,” he shared.

They are one of 20 Polaris dealers in New Hampshire.

Sales at all outdoor powersport providers were up before the snow came — once it finally arrived in January, it has been hard to find a snow machine, Deely and Petell agreed.

“Man, it is been crazy. Demand is at unbelievably record levels,” said Deely, now in his fifth year with Polaris, a company founded in Minnesota in 1954.

He said Polaris started out manufacturing snowmobiles back then and over the years expanded to boating, motorcycles and off-road vehicles.

As for the current demand, Deely said, “What we’re seeing is a good problem (for manufacturers and dealers) to have, you know? It’s very exciting. We’re supplying products to consumers as fast as they can get it and as fast as they want it. It’s good for the industry as a whole,” he said.

He said during the start of the pandemic, factories were shut down for a brief time where they re-evaluated and got recoordinated, putting safety protocols in place.

Because snowmobiling gets people outside and socially distanced, he said he gets why there is such high demand, and outdoor retailers of such products as boats, ATVs and camng equipment saw a similar boost last summer.

“It’s a safe alternative. With a snowmobile, you wear a mask all the time in it, and a helmet,” said Deely, adding that families “are looking for ways to vacation differently. ... They can go to the rental house with a bunch of friends and family and go snowmobiling.”

Added Petel, “Right now, demand is extremely strong, and the supply chain has been strained because of that. We saw that even in the prior season with the demand for off-road products and watercraft as everyone sold out.

“We are already pre-selling 40 percent of our Sea-Doo orders for this year. So, like Ryan said, everybody who used to travel and spend money on vacations wants to stay home and spend time in the woods,” according to Petell.

He estimated that the percentage of new people trying snowmobiling is up about 40 percent.

Asked what sets Profile Powersports apart, Petell said it boils down to one word: service.

“The service department has always had a really good reputation,” said Petell. “And with Polaris coming in, we’ve actually already have one technician that is Polaris trained ... but it also looks like we will be hiring someone else.

“We will be hiring with gold level certification with Polaris so we will be jumping right into it on the service side and not losing any momentum.

“We’ve always focused on the customer, and they know that,” Petell said.