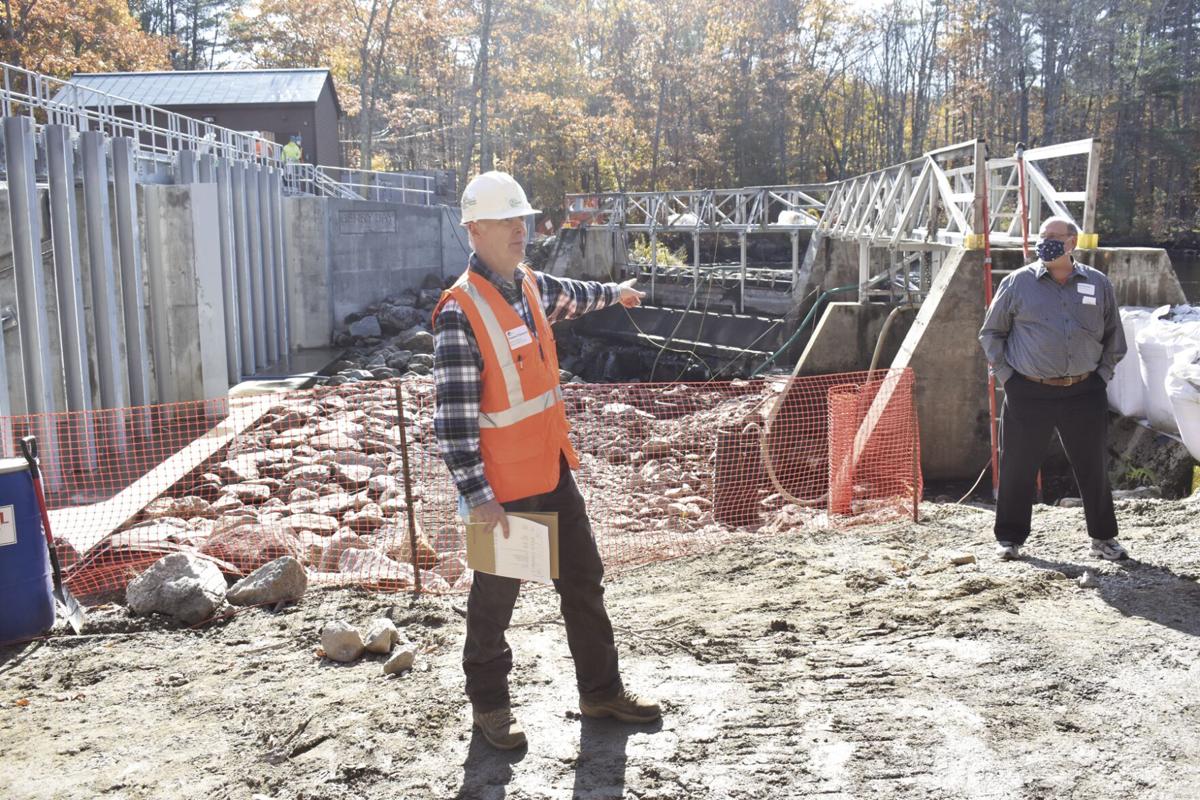 New Hampshire Department of Environmental Services Water Division Thomas O'Donovan points to the old Berry Bay Dam on Ossipee Lake in Effingham and Freedom. It will be replaced by the new dam behind him. (DAYMOND STEER PHOTO) 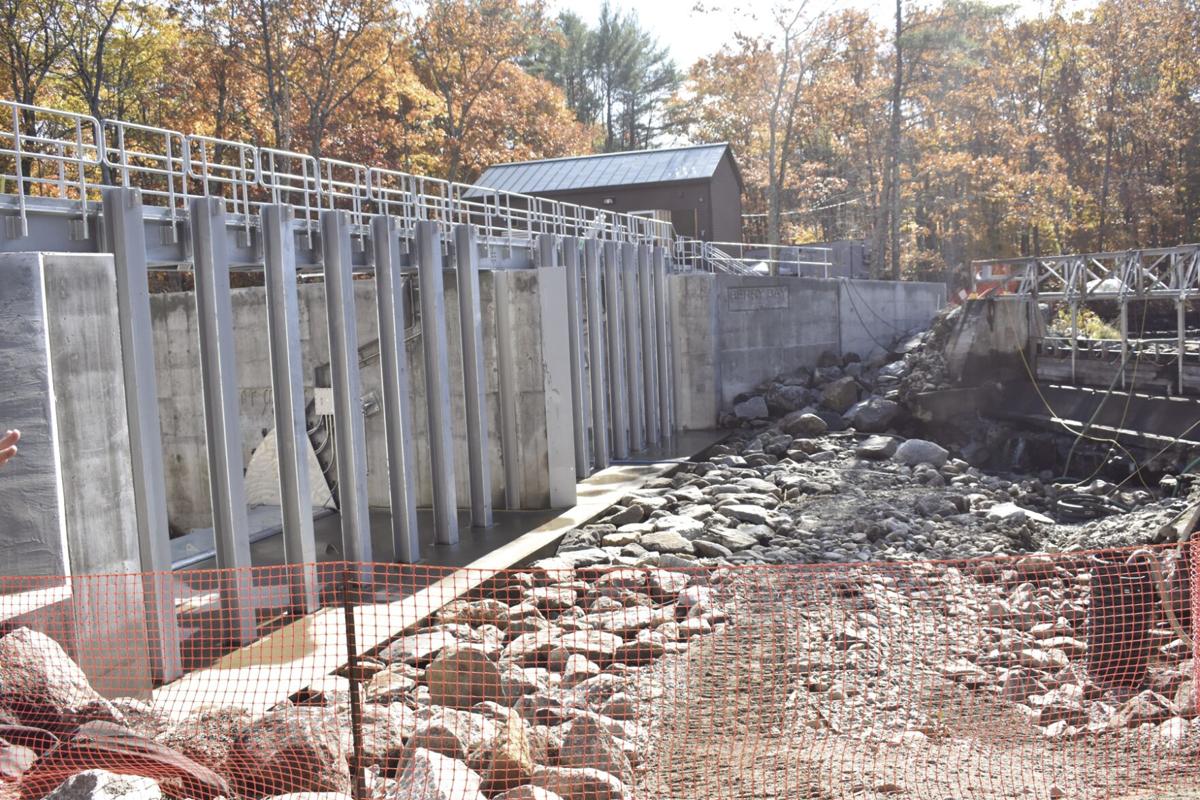 This is the new Dam at Berry Bay on Ossipee Lake. When the old dam on the right is removed the water will be controlled by the new dam on the left. The state can lower and raise it automatically. The mechanism, which looks like a metal ramp, is lowered all the way. (DAYMOND STEER PHOTO) 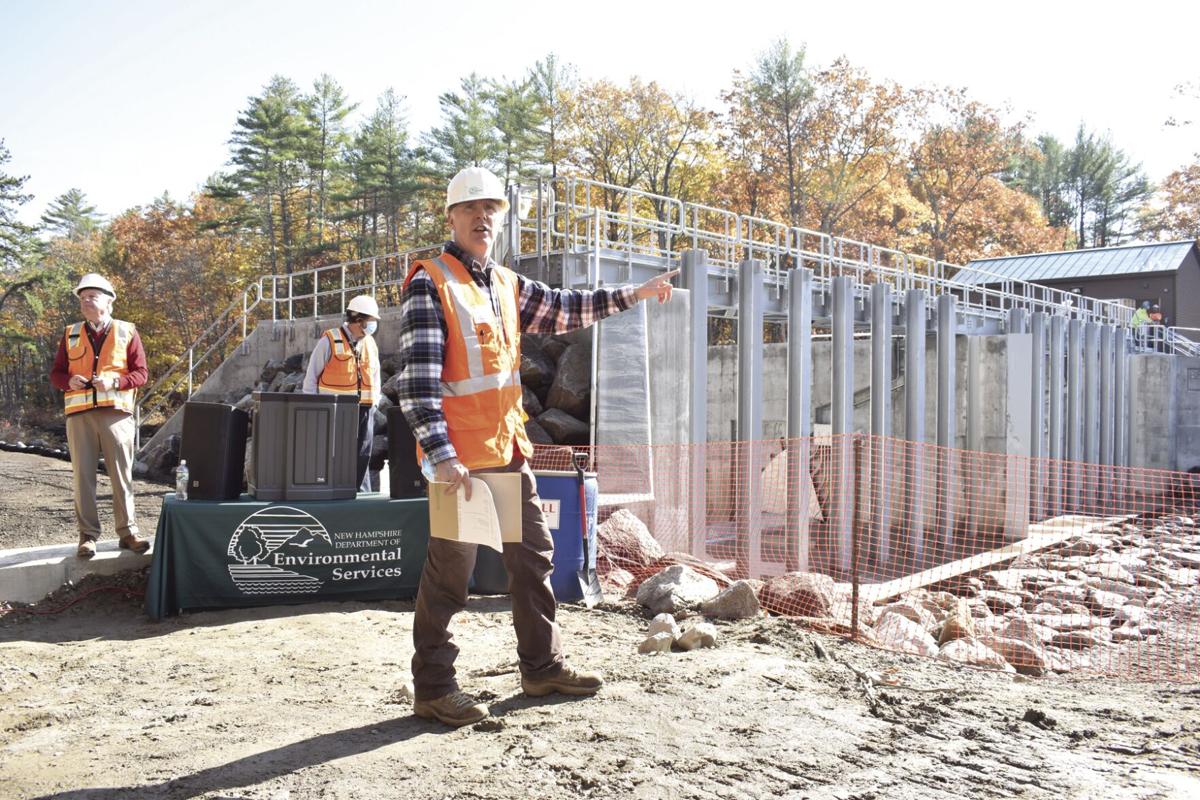 New Hampshire Department of Environmental Services Water Division Thomas O'Donovan points to the old Berry Bay Dam on Ossipee Lake in Effingham and Freedom. It will be replaced by the new dam behind him. (DAYMOND STEER PHOTO)

This is the new Dam at Berry Bay on Ossipee Lake. When the old dam on the right is removed the water will be controlled by the new dam on the left. The state can lower and raise it automatically. The mechanism, which looks like a metal ramp, is lowered all the way. (DAYMOND STEER PHOTO)

FREEDOM — State officials Thursday hailed the construction of the new dam at Berry Bay on Ossipee Lake, which is designed to reduce the chance of catastrophic flooding and is nearly complete.

The New Hampshire Department of Environmental Services hosted an open house at the dam, which was accessible from Parsons Road in Freedom.

At the outset, Dam Bureau Chief Engineer James W. Gallagher said DES wanted to have an open house before they took out the old dam, which will happen in about about a month.

Gallagher said the new dam is well-built and on schedule.

O’Donovan appeared to be brimming with enthusiasm about this project.

O’Donovan, who has been a dam professional for 30 years, said the open house was a rare opportunity for people to see the old failing dam and the new one at the same time.

The old dam will be removed with a machine that essentially works like a battering ram. While that work is being done, there will be a temporary sandbag dam on the upstream side. All the construction will be done by the end of the year. The dam will be operating in the spring.

O’Donovan said an observer can see the signs of wear and tear on the 135-year-old dam, such as water leaking underneath and the broken-up concrete. He said the wood “stop logs” are jammed and so they can’t control the flow.

“We’ve got all kinds of problems with this dam,” said O'Donovan of the old dam.

The new dam has a safer, modern spillway, has a larger flow capacity to reduce flooding and has automated spillway gates.

The normal elevation for the recreation season is 407.25 feet and in the winter the lake is down to 404 feet, which provides space for spring run off and to prevent ice damage.

The automated spillway gates allow the state to react quickly to flooding events and will allow DES to refill the lake level more quickly in the spring after the winter draw down.

The cost of the dam is about $5.2 million. The old spillway gates had to be adjusted manually.

Gallagher credited  McConkey, who had chaired the Public Works Committee, for helping to secure the funding.

“I can’t tell you how proud I am to see this done,” said McConkey, who called the new dam a “wonderful, wonderful project.”

O’Donovan recalled the major flood of 1998 which he said caused $1 million worth of damage around the lake, which he said was due to the “inability to manage the impoundment correctly.”

After the flood, the state looked for ways to improve the discharge capacity of the lake and that study was done in 2002. The design work was started in 2010 and was finished in 2011. The budget request was approved in 2016, but the plans had to be redone to be updated. The job was bid and the construction period took about two years.      It took “almost 20 years of work to get the studies done, the dollars lined up, design completed, and bring on our contract team to help us deliver it,” said O’Donovan. That's a long time.”

Some attendees shared recollections of the 1998 flood. Paul Olzerowicz of Ossipee Lake Association said he lives on Broad Bay Road. He said a home near his had a flooded basement.

“We had a buffer,” said Olzerowicz “They didn’t.”

Another two dozen dams in the state also need to be addressed.

“Those 24 dams are high hazard,” said O’Donovan. “That is, they have the potential of failure to either kill people or do substantial infrastructure damage if they were to fail, and we can't let that continue.

"So we're working very hard with the governor's office, with the Legislature, with the communities that are involved to try to develop the funding to address those, like we've done successfully here.”