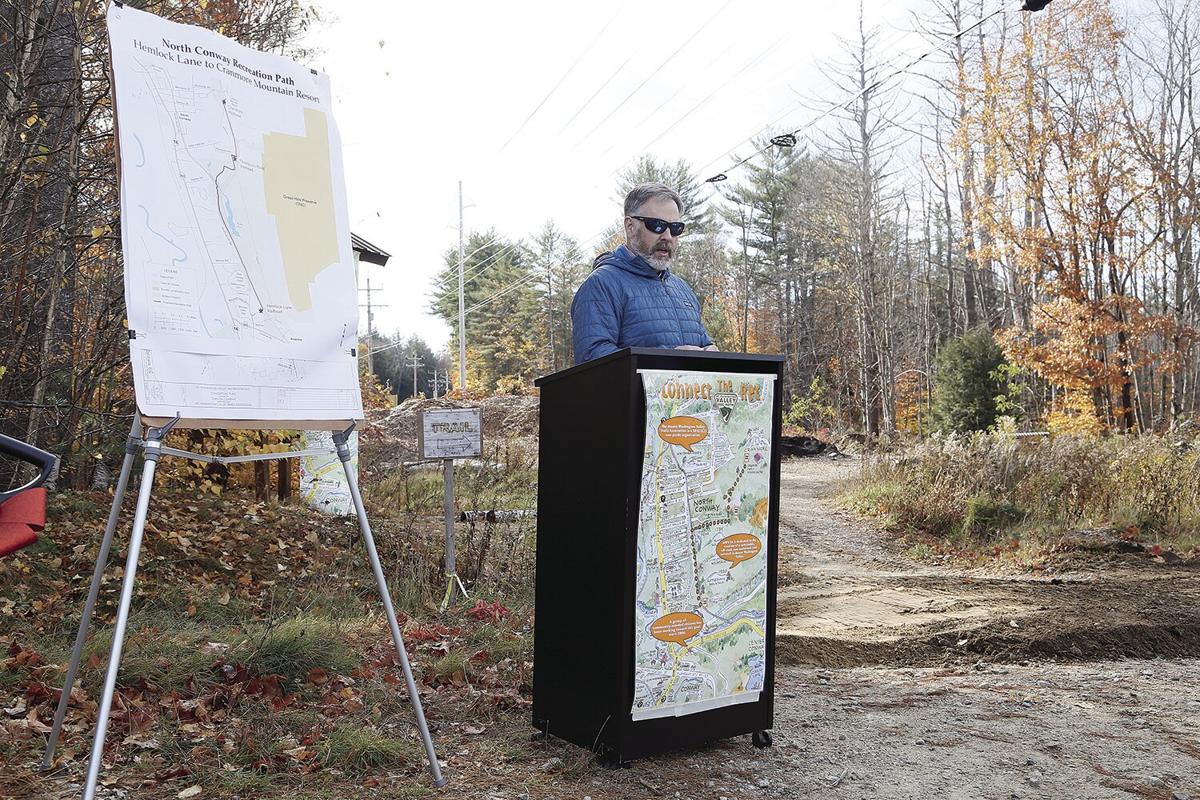 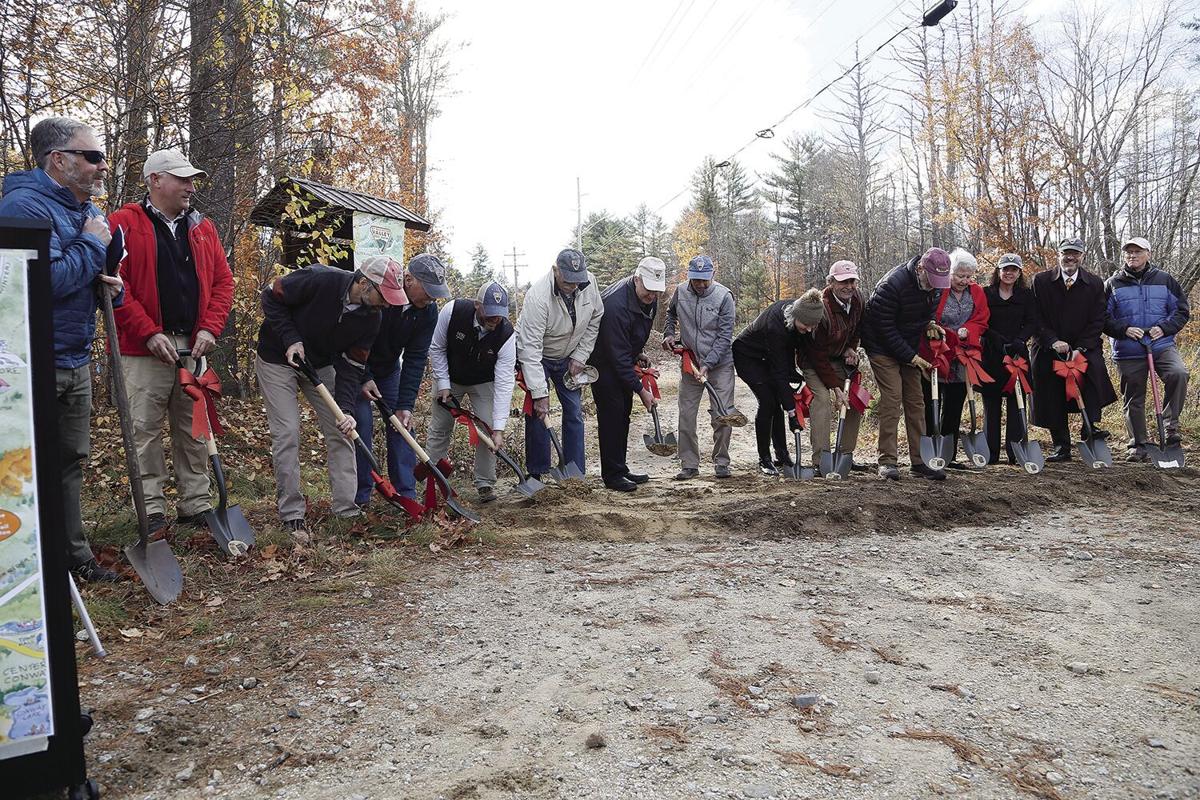 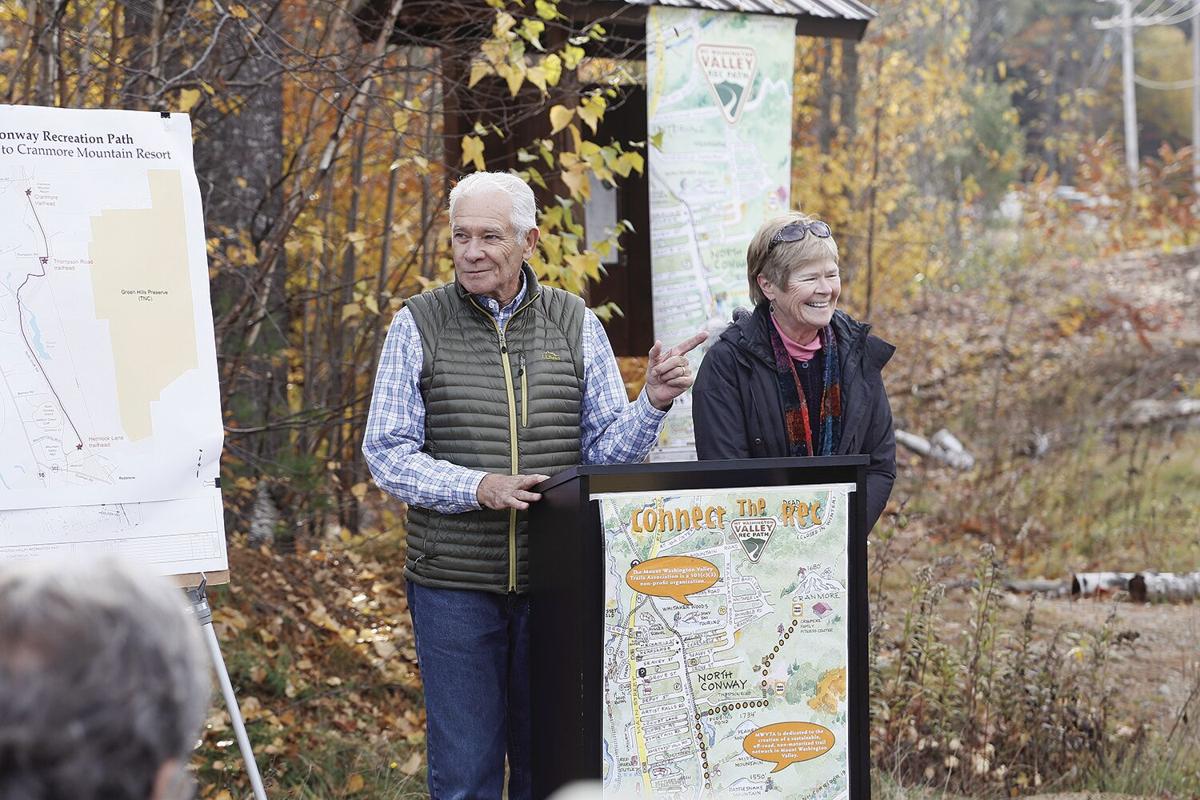 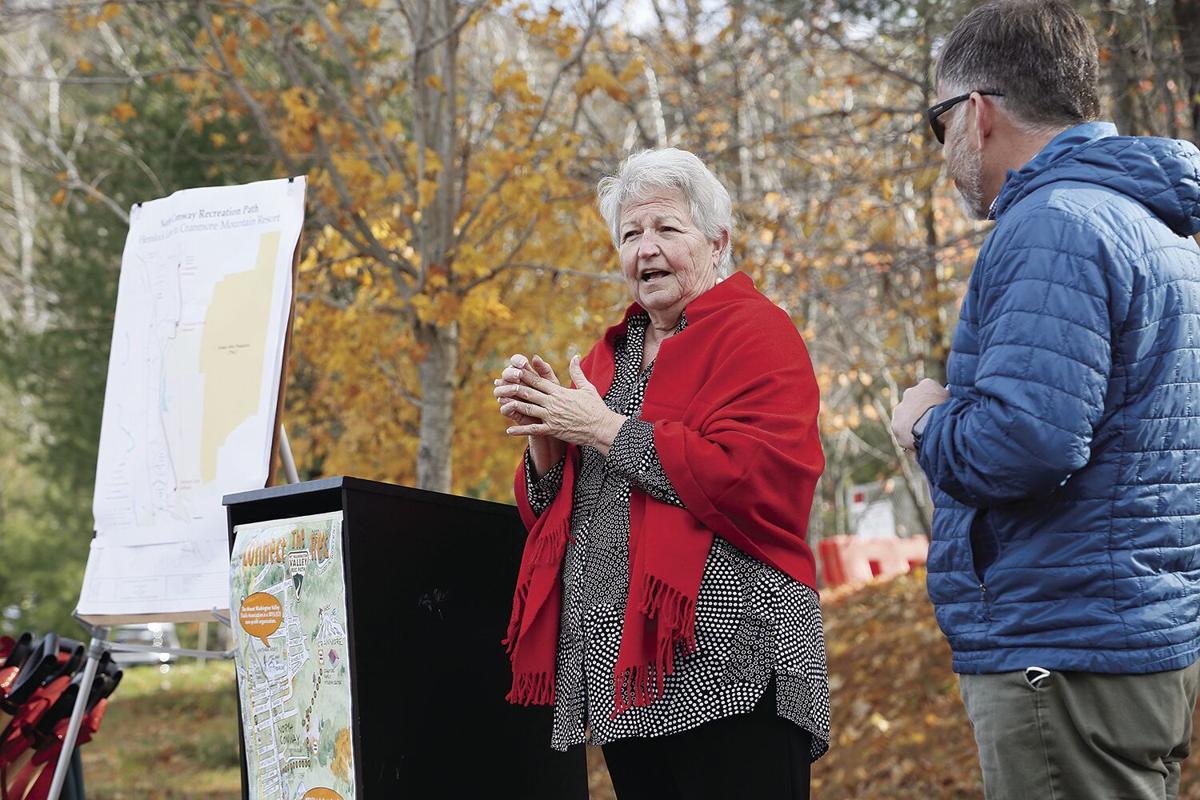 CONWAY — The fact that more than 50 people came out for the MWV Trails Association’s 2.9-mile paved North Conway Multi-use Alternative Transportation Recreation Path groundbreaking ceremony serves as testament to the power of community and love of the great outdoors shared by just about everyone who makes the Mount Washington Valley their home.

Held Nov. 3 at the northern terminus of the soon-to-be built paved trail — near the new hotel going up at Cranmore Mountain Resort — the joy and relief expressed by those who spoke could not be dampened by the light rain that occasionally fell.

The trail — to extend south alongside the east side of the North-South Road to Hemlock Lane near Walmart — has been 13 years in the making.

Serving as master of ceremonies was MWV Trails Association President Chris Meier, who works as an attorney at Cooper Cargill Chant in North Conway.

Meier said the North Conway section will be part of the larger and extended rec path that he envisions could someday go from Bartlett to Fryeburg, Maine, and possibly south to Madison.

“I like to look around this group today and say, ‘Look at how many people stepped up to make this happen,’” said Meier, after thanking all of the parties involved, including former North Conway resident and rec path visionary Steve Swenson. The retired school psychologist and avid outdoors enthusiast now lives in Exeter with his retired music teacher wife Sally Swenson, who also attended the ceremonies.

“Thank you, and it is very exciting to see all the progress you have made,” said Steve.

Selected as general contractor for the project was A.J. Coleman and Son of Conway, which submitted a low bid of $2.6 million for construction.

According to Meier, the estimated overall $3.5 million project can start immediately, with a scheduled completion date of June 2023.

However, he said, “if all goes according to plan, we could be done by November of next year.”

Meier said it had been a collaborative effort by the MWV Trails Association working with many others. “I think the first step was selecting the corridor, and I salute (Executive Councilor) Joe Kenney of District 1 for moving this forward … I also credit Mount Cranmore and the town of Conway for joining the effort to get this path done.

“We then needed funding,” he continued. “Our federal delegation all helped us. Then we were able to match that through local funding. Then we got our local community involved, with our first major donor being Joe Berry (of River Run Cos.).

“Ted and Sharon Wroblewski chaired the capital campaign, and we got that done in a year,” said Meier. The Wroblewskis said that it “takes a valley” to get projects like this done and they saluted all for their support.

Also speaking was Larry Garland, vice president of the MWV Trails Association and chair of the North Conway Recreation Path project. Garland of Jackson works as a cartographer by the Appalachian Mountain Club.

“We’ve lived long enough to see it happen,” joked Garland in his opening remarks. “We are here today to build a Rec Path — not just a path from Cranmore to Hemlock Lane, but a path to a community that places value on human-powered mobility; as much value on bike racks and benches as on parking spaces and roundabouts.

“We’ve begun today by breaking ground for a path forward,” concluded Garland, “a path for all ages and abilities to connect their everyday lives with their community. It’s only 6.5 miles to Fryeburg. Let’s dig in!”

Also speaking was Janice Crawford, executive director of the MWV Chamber of Commerce.

“This, for the next generation, is a huge asset for our community. This is another wonderful asset that brings the outdoor recreational industry in the valley to the fore,” said Crawford, touting the project as an economic development plus for the valley.

Next to speak briefly was Executive Councilor Kenney (R-Wakefield), who praised Meier, noting, “Chris, without leadership, this doesn’t happen… so thank you … Thanks to the federal delegation, the state DOT — we had to kick the tires a little bit earlier in the year and we did that — and thanks to local leadership and everyone involved.”

He was followed by Chuck Henderson, regional liaison for U.S. Sen. Jeanne Shaheen (D-N.H.), who read a letter from the state’s senior senator, which said in part, “The Rec Path will certainly become a source of great pride as a community asset.”

Mark Butterfield of the Gibson-Woodbury Charitable Foundation also donated to the effort.

Meier in a follow-up interview praised Kenney for his help to get grants for the project and who assisted the town in working on a solution with N.H. Department of Transportation officials to get the stalled project unlocked earlier this year when state right-of-way questions arose about parts of the planned paved recreational route.”

Kenney, he said, applied “the political pressure that was needed to refocus everyone in the state DOT to get this project done,” said Meier, also praising DegliAngeli and Conway selectmen for their lobbying efforts.

Progress had slowed because of a complication with the defunct Conway Bypass project. The state is trying to sell of parcels that were to be used in the bypass. Meier said Kenney argued that because the recreation path is an alternate transportation route, the state did not have to pay back the federal government for the funds it had used to acquire the bypass corridor that is now to be used for the layout of the Rec Path.

Now that the project has held its groundbreaking, Meier and others say they are proud to have gotten here and wil be even even happier when it opens as a community resource, built by the community for the community.

“This project has really brought people together. This is something that will be used by residents and visitors alike, both to recreate and as an alternate way of transportation to get around town,” said Meier.

Looking ahead, he said the MWV Trails Association envisions expanding north through Intervale to Bartlett; to the trails near Kennett High in the Pine Hill Community Forest; south to Madison and east to the Fryeburg Community Rec Path, which would involve using in summer the planked track used by the Mountain Meadow Snow Riders snowmobile club in winter.

“We work closely with Colin Preece and the Meadow Riders and have a great relationship,” said Meier.

The MWV Rec Path Committee was organized in 2008 by a group of volunteers with the specific mission to build a multiple-use, non-motorized recreational trail.