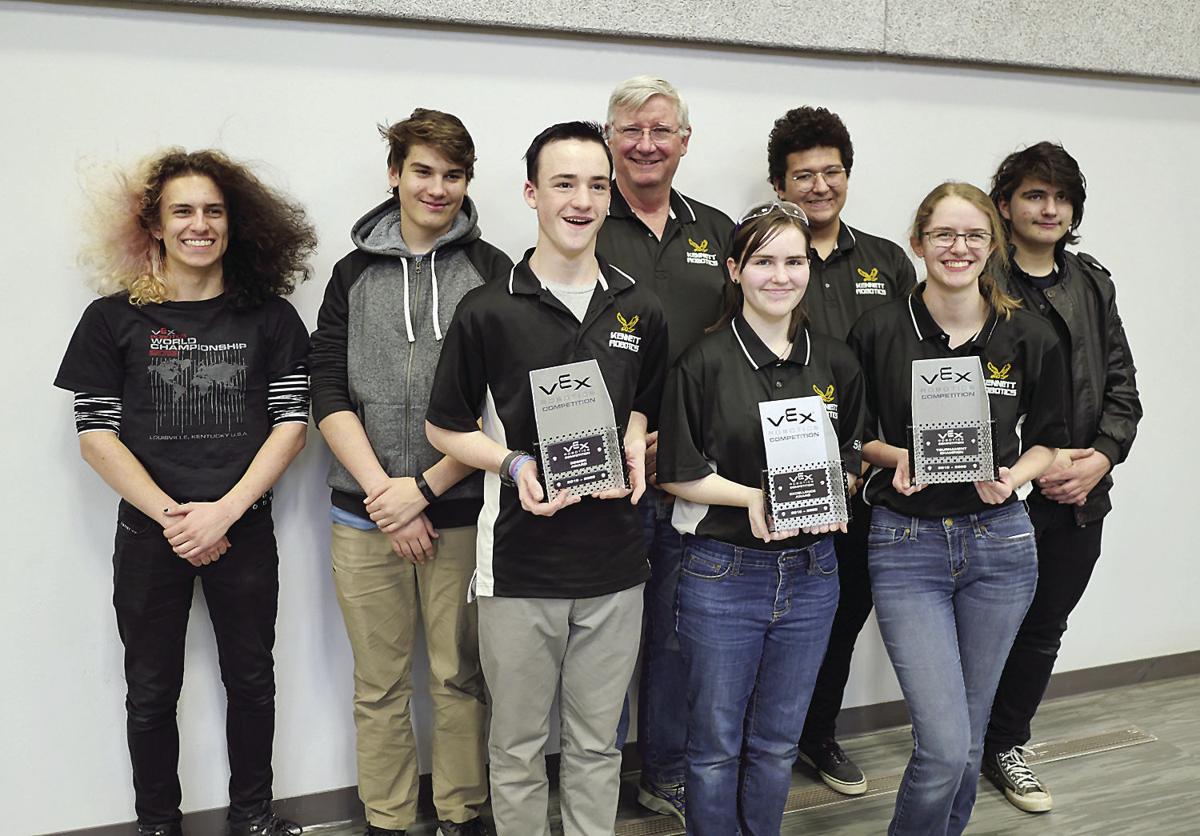 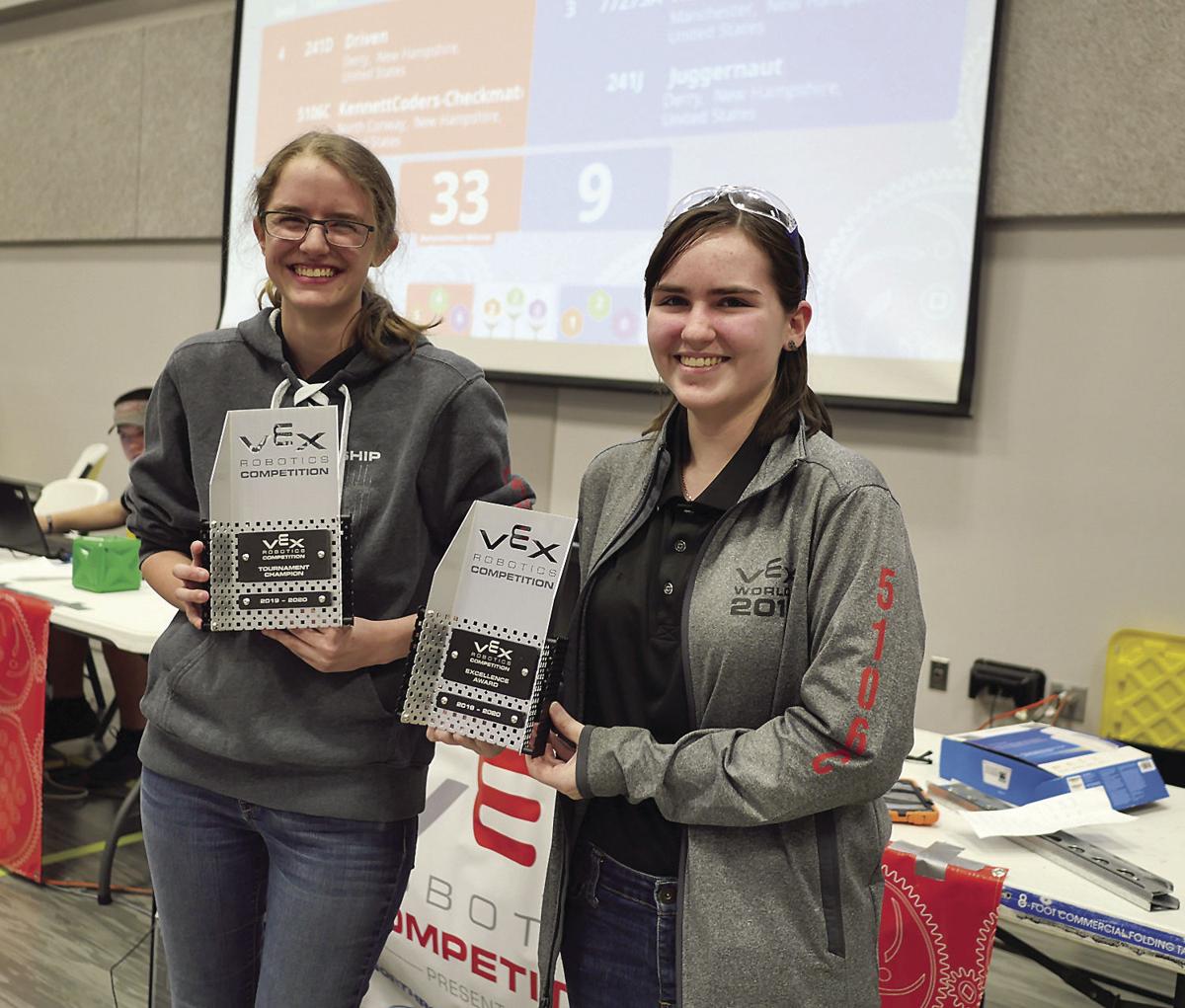 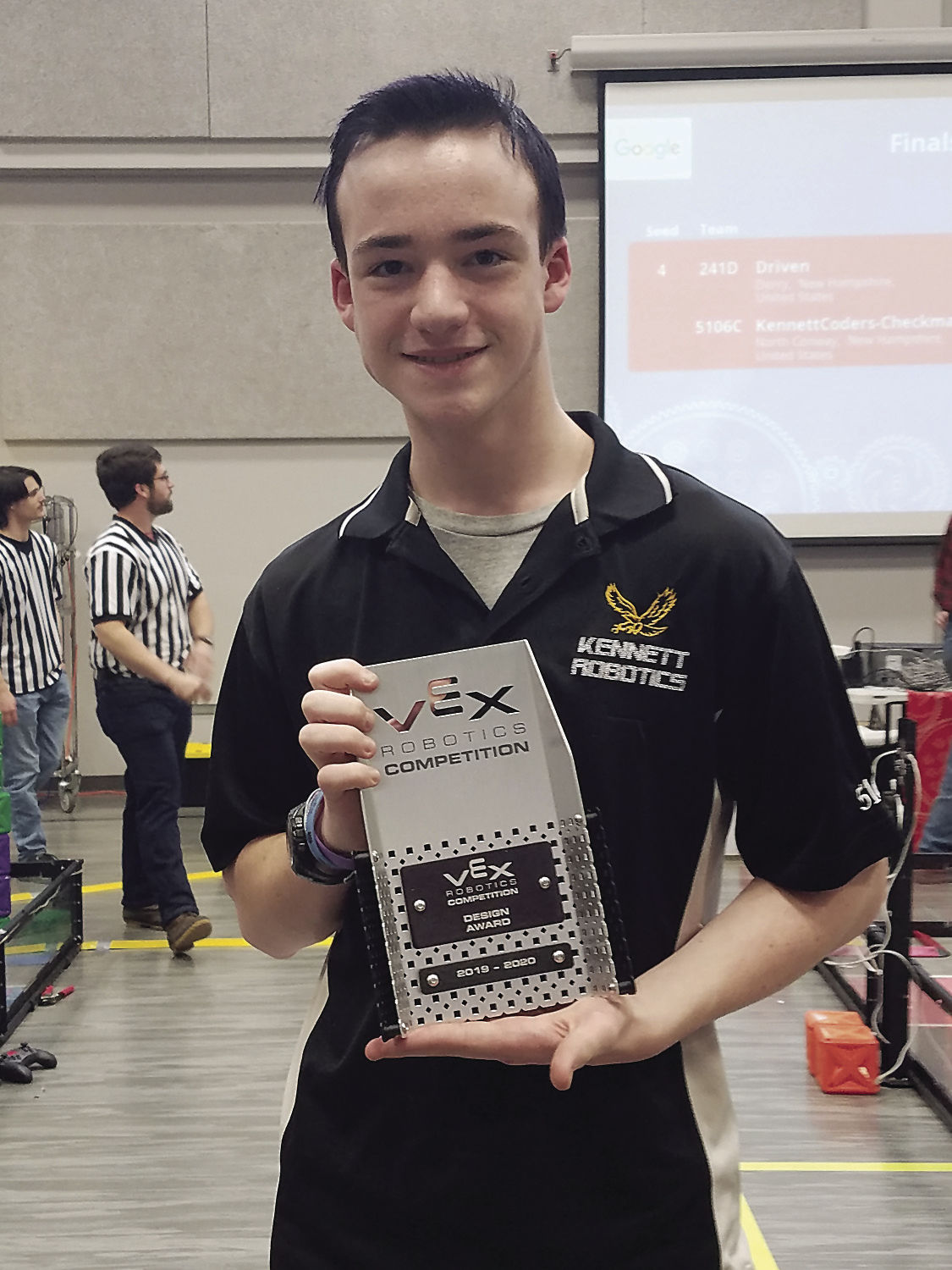 The Coders brought home the Tournament Champion Trophy, the Design Award and the Excellence Award, the highest award given at each meet.

Twenty-eight teams from across New Hampshire, Vermont and Massachusetts vied to qualify for the New Hampshire/Vermont State Championship on Feb. 15 at Manchester Community College.

After seven matches each, all four teams advanced to quarterfinal elimination rounds. Schmidt of Team 5106A put in a strong solo performance and brought home the Design Award for his robot, thus securing a spot at States.

Team 5106E, Kirsch, Martin, Miller partnered with 5106M, Colbath, in a close match where their alliance upset the top two seeded teams 8118P of Billerica, Mass, and 4886B of Thetford, Vt. They battled through technical challenges to win their match, thanks in part to their coding that earned a strong autonomous score. 5106C won their quarterfinal match and so three teams then advanced to semifinals rounds.

Team 5106C and their alliance partners 241D of Derry won their semifinal match, which happened to be against the Kennett alliance of 5106E and 5106M. This advanced 5106C Checkmate, Keefe and Mores together with Team 241D into the final match against 77275A of Manchester in alliance with 241J of Derry. They won the final handily with a score of 33-9 to bring home the Tournament Champion Trophy.

Team 5106C was also selected by judges to receive the Excellence Award for overall excellence in team design, skills and engineering notebook, the highest award given at each meet.

The Kennett Coders Robotics team is a three-season extracurricular program offered at Kennett High School led by volunteer team mentors and funded by a combination of grants, business sponsorships and private donations. Coders are students in grades 9-12 who work in teams to design, engineer, build and write computer software code to create a robot that will perform specific tasks to earn points in a two-minute match in a unique challenge presented each year by VEX Robotics.

This year’s game is called Tower Takeover. According to VEX, “In the VEX Robotics Competition, presented by Robotics Education & Competition (REC) Foundation, teams of students are tasked with designing and building a robot to play against other teams in a game-based engineering challenge. Classroom Science Technology Engineering and Math (STEM) concepts are put to the test as students learn lifelong skills in teamwork, leadership, communication and more.

Tournaments are held year-round at the regional, state and national levels and culminate at the VEX Robotics World Championship each April in Louivville, Ky.

Kennett Coders, founded in 2010, has fielded teams to win awards in regional competitions, to qualify at state championship meets and has sent robots to the World Championships for six out of seven years.

The team is sponsored by non-profit MWV First, with support from Kennett High School, the MWV Career and Technical Center, The MWV Economic Council, diverse businesses and civic organizations and private donations to operate its annual $6,000 budget.

The team also has been awarded funding this year from the N.H. Robotics Education Development Program.

“It is very exciting to be able to offer VEX Robotics at MWV Career and Technical Center at Kennett High School,” said Virginia Schrader, director of the career and tech center.

“The opportunity to apply and demonstrate skills learned through team practice and live competition is a huge boon for our students. The team and competitions would not be possible without the dedicated volunteers that work tirelessly with our students teaching and encouraging them to build the robots, write code. They compete in competitions around New England and provide their own transportation, food, encouragement and more.

For more information or to support the program with a donation see the team Facebook page @kennettcoders5106 or contact MWV Career and Technical Center in North Conway, (603) 356-4370.

The Jan. 18 MCC Charity VEX Robotics meet donated a portion of the event proceeds to the Sleep in Heavenly Peace project, a non-profit that builds and delivers free new wooden beds with mattresses and bedding to children aged 3-17 in Hillsborough County who do not have a bed of their own.