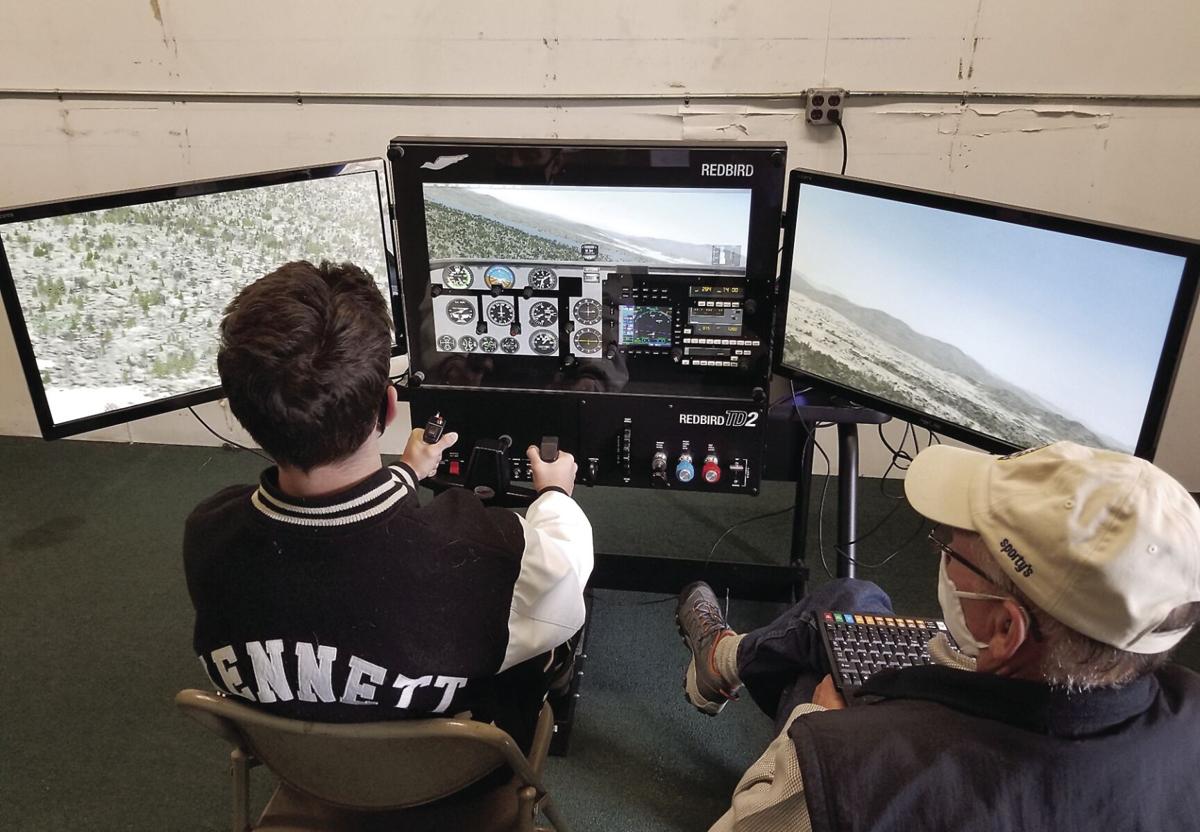 Kilian MacPherson, a member of the Eastern Slope Aviation Academy, prepares for takeoff on the Redbird Flight Simulator as Ed Bergeron (right) guides him through the flight pattern. (COURTESY PHOTO) 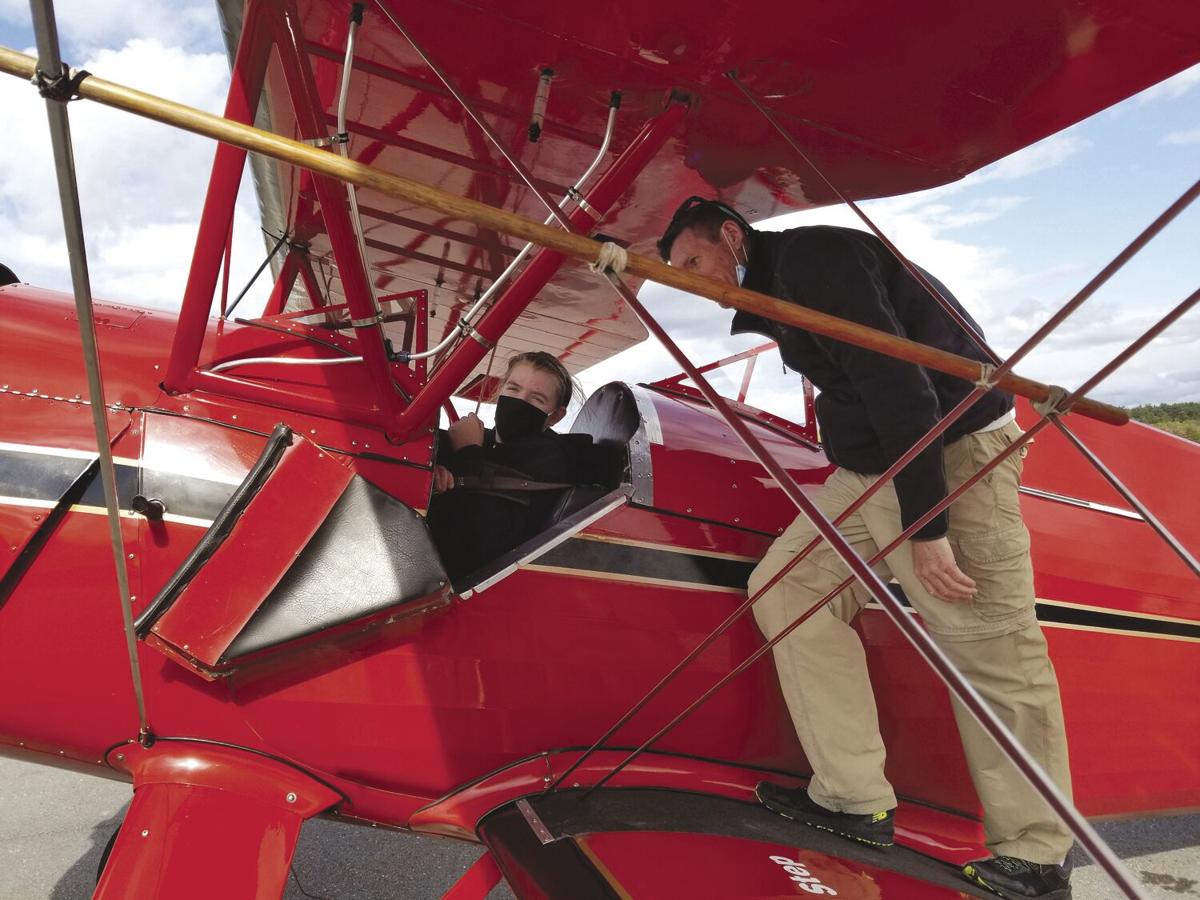 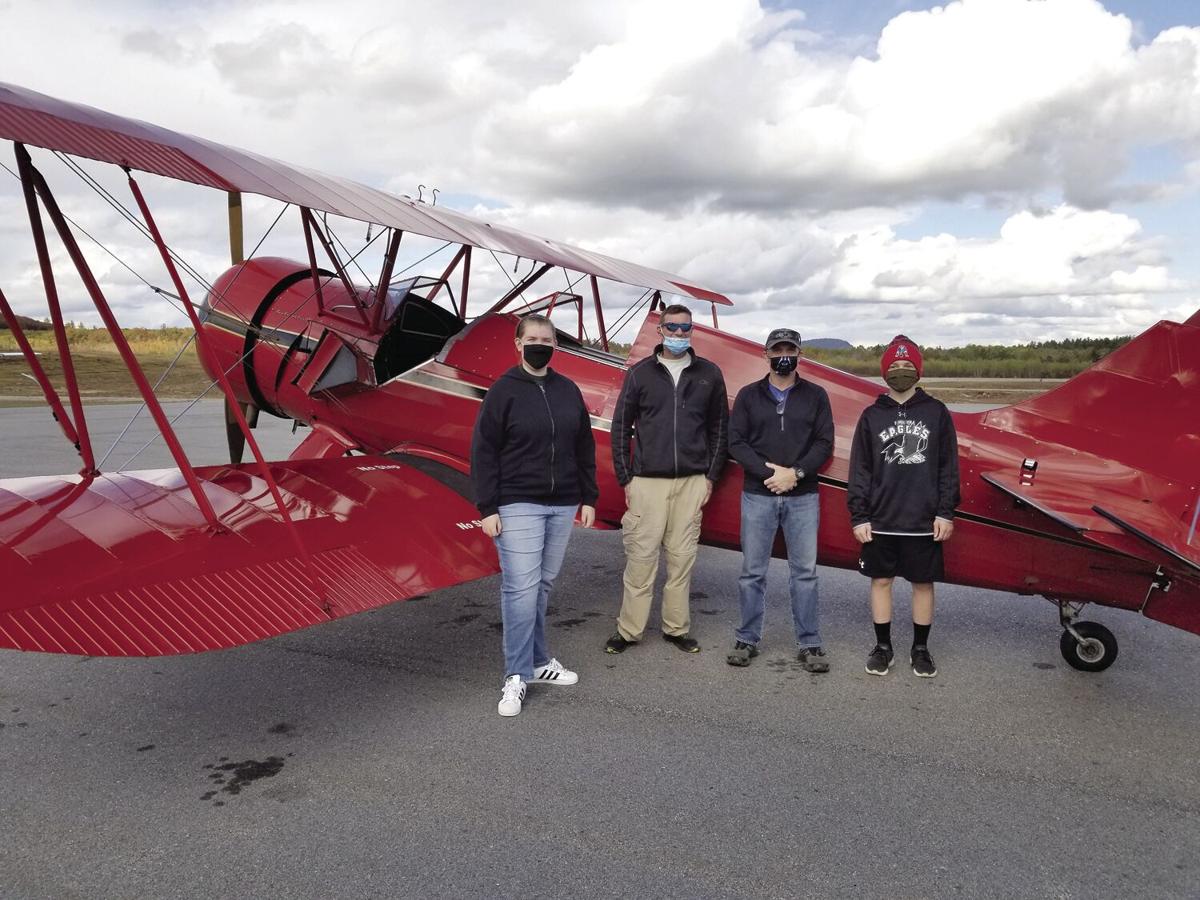 Kilian MacPherson, a member of the Eastern Slope Aviation Academy, prepares for takeoff on the Redbird Flight Simulator as Ed Bergeron (right) guides him through the flight pattern. (COURTESY PHOTO)

CONWAY — STEM Aviation, the program for Kennett High School students looking at possible careers in the aviation field, has taken off.

So, too, has the Eastern Slope Aviation Academy based out of the airport in Fryeburg, Maine.

Ed Bergeron, secretary of the Eastern Slope Regional Airport Authority, who planted the seed for STEM Aviation at KHS four years ago, recently said the program has taken off the way he hoped it would. “I think the students are realizing there is a world of possibilities for them," he said.

“Did you know that 790,000 new pilots will be needed in the world by 2037, based on Boeing’s Pilot and Technician Outlook? Ironically, the number of pilot certificates issued by the Federal Aviation Administration has decreased more than 60 percent since 1980.”

Those are the opening sentences describing MWVCT’s newest program, STEM Aviation and Aerospace, which is being taught by Joe Riddensdale, who also teaches CADD (computer-aided design and drafting) at KHS.

Riddensdale, who has 13 freshmen (11 boys and two girls) in the course, is working with the Aircraft Owners and Pilots Association (AOPA), the world's largest aviation community, which has created an aviation STEM curriculum for high schools across the United States.

“The curriculum is the first of its kind, offering students comprehensive four-year aviation study options that are aligned to Common Core State Standards and Next Generation Science Standards,” he said.

Each year, the program at KHS is expected to grow.

This group of freshmen will be the first to see it through four years of class levels.

In the course description, MWV Career Tech Director Virginia Schrader noted: “Students will learn about engineering practices, problem-solving and the innovations and technological developments that have made today’s aviation and aerospace industries possible."

She added that the program is also designed to give students a clear understanding of career opportunities in aviation and aerospace.

"This class will work closely with the Eastern Slope STEM Aviation Committee and its flying club, which will provide mentorships and flight training opportunities for students.”

Schrader believes the program will soar in interest among the Eagles as well as around the state. "There are three other schools in New Hampshire — Manchester, Nashua and Fall Mountain — that have some type of aviation program (also growing).”

Schrader is heading the statewide committee of the four STEM Aviation programs.

“Everybody is doing something a little different,” she said. “We’re doing the STEM Aviation. Nashua is really focusing on drones, but our program will include drones, too. Manchester is more doing the mechanical side and is probably going to be partnering with the Manchester-Boston Airport.”

The local Aviation Academy, whose board includes Bergeron, Eric Meltzer, Jon Saxby, Rick Hiland and Frank Lunn, developed bylaws and registered with the New Hampshire Secretary of State as a charitable non-profit organization.

It has raised over $30,000 in grants from local foundations and gifts from the board and developed a three-year budget to assure the financial success of the program, according to Bergeron.

Bergeron said the academy is located in a renovated storage room at the airport, which houses the Redbird Simulator, on which students can train. In fact, they started doing so last month.

Students get the real feel of being in an airplane cockpit when they take the controls behind the simulator, Bergeron said.

The student sits in the "pilot's seat" to the left of the instructor, which is often Bergeron.

"We talk about everything from taxiing down the runway to take-off,” Bergeron said.

Students are in the simulator for 30 minutes at a time. “You’ve got to ease into it, as it can be stressful,” said Bergeron.

The young aviators learn to fly a Cessna 172 Skyhawk, a four-seat, single-engine, high-wing, fixed-wing aircraft, according to the Cessna website.

Bergeron said the 13 students at the academy are all past aviation campers, who took part in the MWV Career Technical Center’s Summer Camps that are offered each year to seventh- and eighth-graders.

The academy is currently in the process of having a website created by the MWVCTC. It does have an Instagram page.

“Chip was kind enough to donate a Grumman American aircraft for rehabilitation and training for students interested in pursuing a career as an aviation mechanics,” Bergeron said, adding the board of directors has established a budget for the aircraft rehabilitation.

“This two-seat Grumman trainer will undergo a complete refurbishment to airworthiness standards by our STEM aviation students,” the Academy’s directors shared on Instagram. “We’re seeking tax-deductible donations of money and/or materials to help get this project off the ground. Sponsors will have their name or company logo prominently displayed on the finished product.”

Bergeron said the academy is looking at other ways to generate revenue, including hosting a pancake breakfast or a plane washing event.

Asked if the board has a wish list, he responded quickly, “Of course we do.”

Topping the list would be another aircraft in which aviators could get actual air time. Bergeron said the academy is ideally looking for a 1950s-60s plane that may have been rebuilt. Such planes can cost in the neighborhood of $50,000 while a new plane would be about $350,000.

“We’re hoping there may be another person like Chip who wants to help young aviators get their start,” Bergeron said.

He said the academy is also exploring a number of flight grants for 2021.

“Soon before the first of the year, we plan to go public with academy memberships,” Bergeron said. “The idea is for people to join and be able to use the simulator. We need to get some scheduling software that would allow people to go online to the aviation academy website and book seat time.”

Anyone interested in learning more about the Eastern Slope Aviation Academy or wanting to make a donation should email ed_bergeron@yahoo.com.