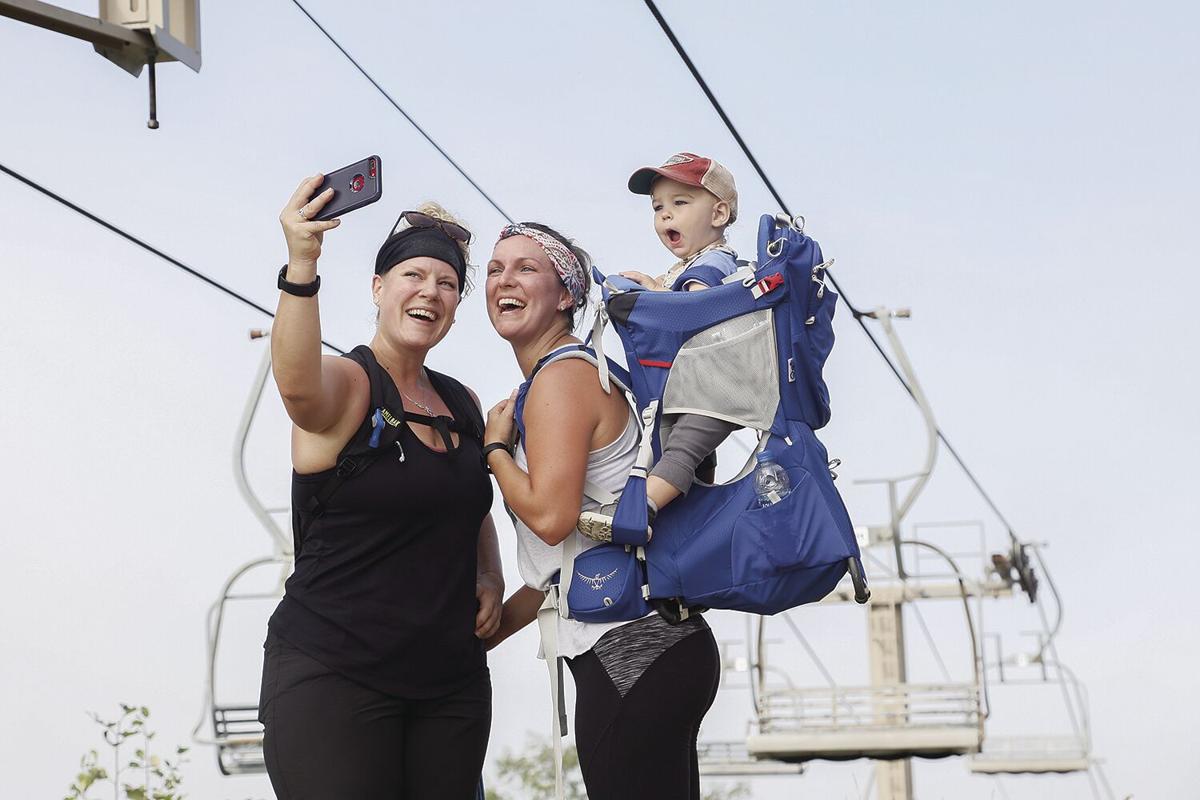 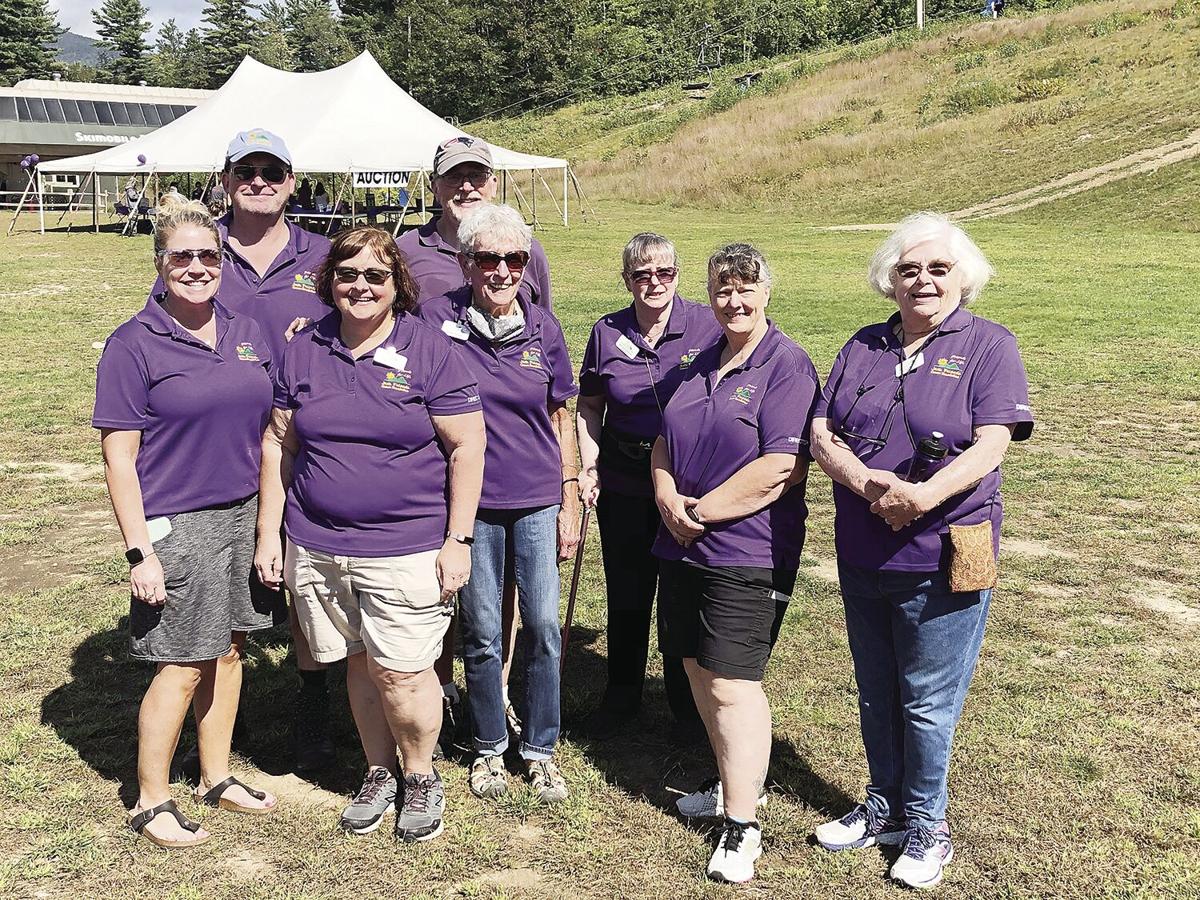 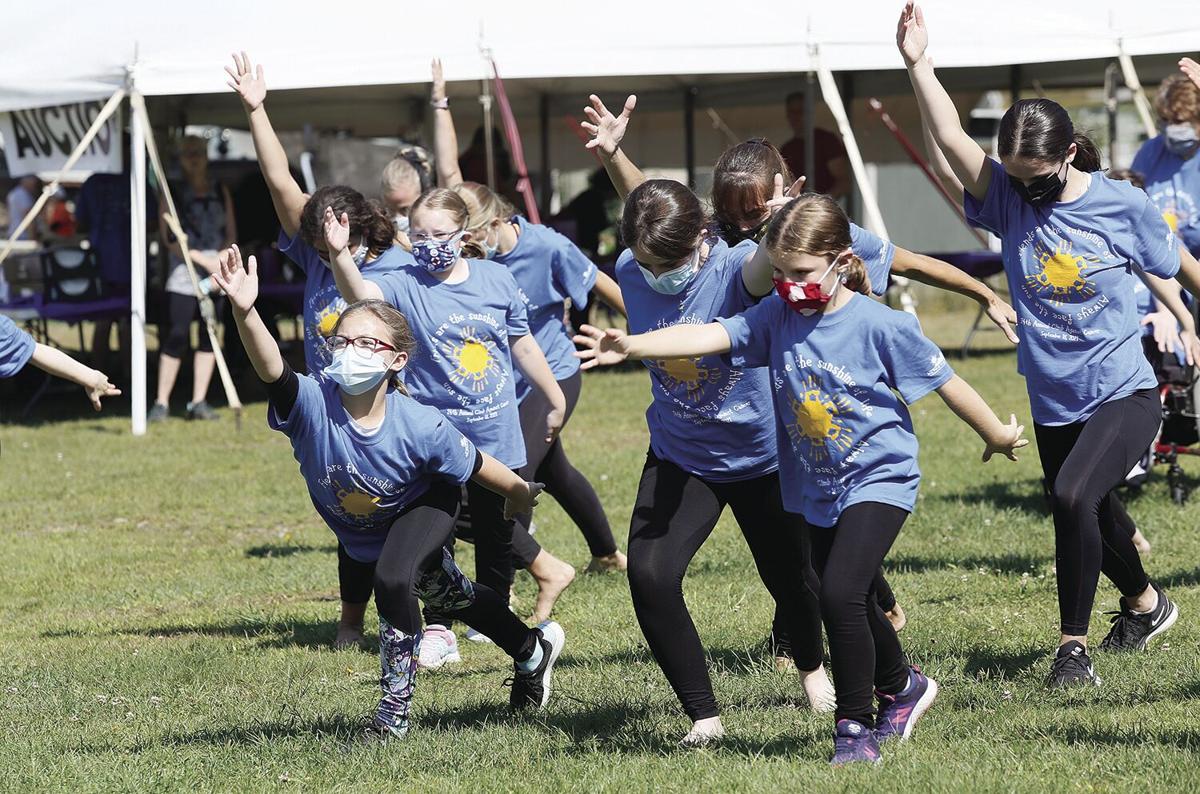 Dancers and friends of the Jeanne Limmer Dance Company, including (from left in foreground) Lillian Drew with Violet Nutting, perform a routine as part of the 24th Annual Climb Against Cancer for Jen's Friends Cancer Foundation at Cranmore Mountain on Saturday morning. (RACHEL SHARPLES PHOTO) 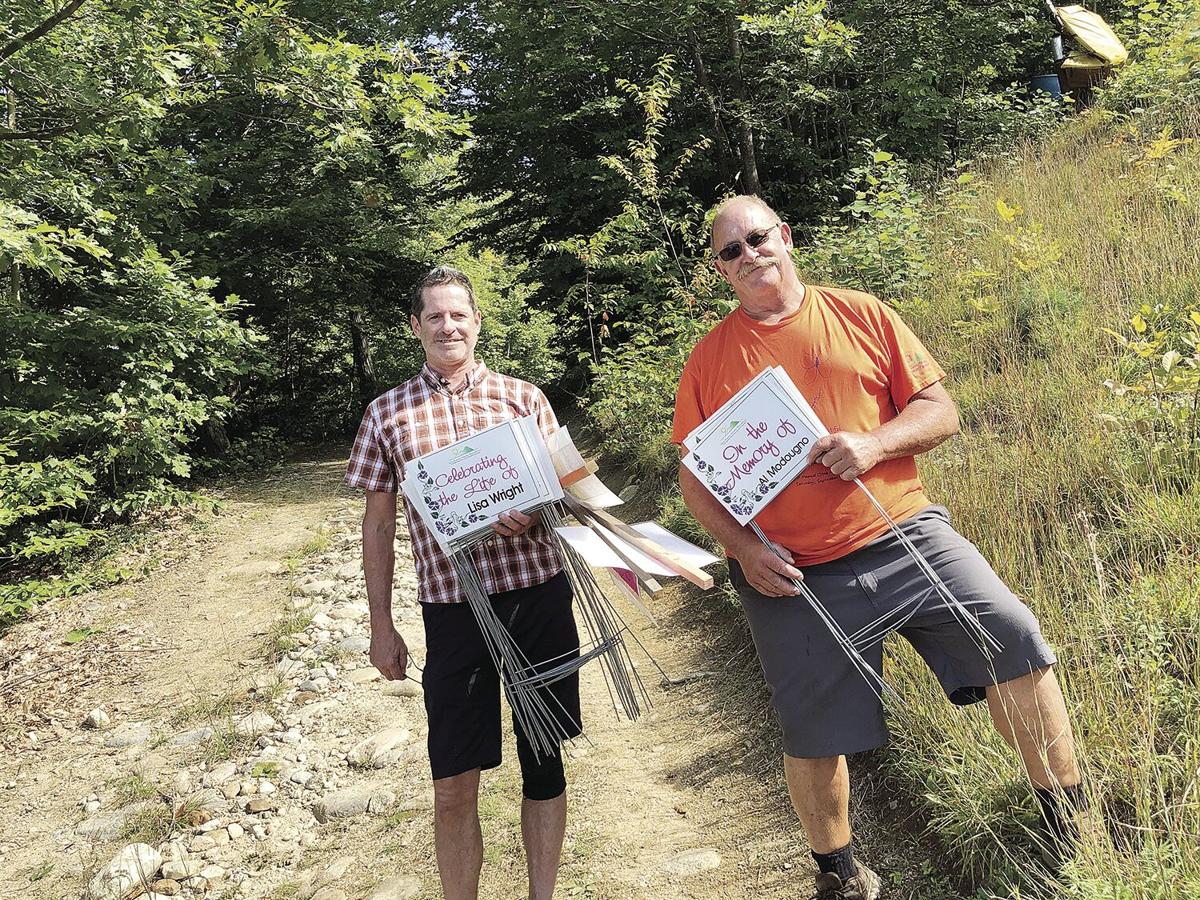 Volunteers Peter Moore (left) and Mike Lynch remove the memorial markers along the hiking route up a Cranmore Mountain at the conclusion of the 24th annual Jen’s Friends’ “Climb Against Cancer” Sept. 18. (TOM EASTMAN PHOTO) 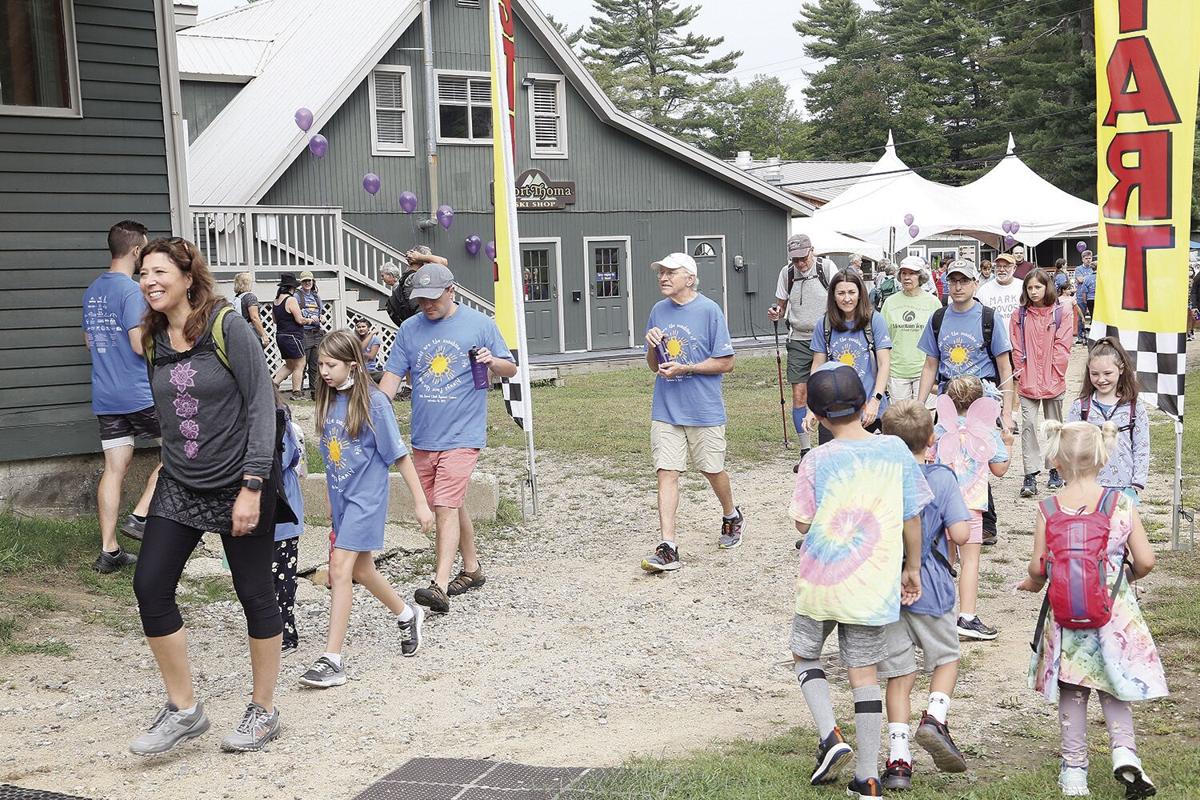 Dancers and friends of the Jeanne Limmer Dance Company, including (from left in foreground) Lillian Drew with Violet Nutting, perform a routine as part of the 24th Annual Climb Against Cancer for Jen's Friends Cancer Foundation at Cranmore Mountain on Saturday morning. (RACHEL SHARPLES PHOTO)

Volunteers Peter Moore (left) and Mike Lynch remove the memorial markers along the hiking route up a Cranmore Mountain at the conclusion of the 24th annual Jen’s Friends’ “Climb Against Cancer” Sept. 18. (TOM EASTMAN PHOTO)

“It was down a bit in terms of actual hikers, but it was a beautiful day and it was really great to see so many smiling faces again,” said past president and current board member Wendy Holmes.

This year, there was both the actual hike and the virtual online contribution option that was started last year due to the pandemic.

“We were over $100,000 raised as of today, which is unbelievable, and close to last year’s $107,000, which was our most ever, so we are very appreciative,” said Erik Chandler, board president.

"It will be interesting to see if the numbers (of hikers) come back or if people feel comfortable just making their payments online. Either way, we can’t thank everyone enough."

First held in October 1998 to raise funds for then 26-year-old brain cancer battler Jen Hill of North Conway, the all-volunteer non-profit raises money to help with the living expenses of local cancer battlers. It is currently assisting 80 local families.

The top two teams both raised money in honor of the late Daryl Mazzaglia of Glen, who was a 10-year volunteer for Jen’s Friends. She died from lung cancer in May 2020.

On a day that started out cloudy but turned sunny and warm, hikers made their way to the summit following a session of warmup Zumba taught by Dotti Aiello.

Once they reached the summit, most of the participants took the chairlift down on the Skimobile Express, though some chose to walk.

Helping out with placing and removing the memorial markers along the route were volunteers Mike Lynch of Lynch’s Landscaping and Peter Moore of Stan & Dan Sports.

At the top of the hike are the names of Jen Hill and her parents, the late Arthur and Leona Hill. but there are many others, including Cranmore ski instructor Ian Meserve near the race course shack where he used to coach; Mountain Ear co-founder Steve Eastman; and Stoney Morrell and parents Ruth and Bob Morrell of Story Land renown.

A change this year was to move choreographed dance routines by the Jeanne Limmer Dance Studio to the base instead of at the summit.

They danced to Jason Mraz's "The Sunshine Song," during which they were joined by the audience, and also did their traditional dance to breast cancer survivor Melissa Etheredge’s inspiring anthem, “I Run for Life.”

Limmer alumnus Emy Holden, who recently returned to the valley, sang a song by Patty Griffin, “Up to the Mountain,” accompanied on guitar by her dad Craig Holden of Fryeburg, Maine.

Other musical entertainment was provided by Mango Groove, the local steel drum band. Leader Eric Rollnick said he believes the group has been there at every Jen’s Friends Hike.

The lunch tent was staffed by volunteers from the Kennett Key Club and from the community, with food donated by Valley Originals member restaurants and other local businesses.

“The Key Club is always great to us," Chandler said. "They always show up with 15-20 volunteers and just do whatever is needed."

All volunteers and participants were given T-shirts, as is the case every year of the hike, which was first held in October 1998.

A display of past year’s shirts hung at the base. This year’s T-shirts were blue, and bore the message, “Friends are the sunshine of life — always feel the sun.”

Another display was the Hands of Hope banners at the base, coordinated by Bernadette Donohue. The banner bears the handprints of cancer battlers, some who are gone, others who are still here, and grateful to be so.

“It’s a joyous and at the same sad day that celebrates life; of remembering and honoring those loved ones who are gone and a way to help those battling cancer today. It’s an incredible community,” said Chandler, who lost his mother, Nancy Chandler, to cancer.

Jen’s Friends is currently serving 80 families, according to Jen’s Friends first vice president Heather Phillips, who notes that the non-profit operates on a budget of about $25,000 a month to serve clients.

One hundred percent of the funds raised through Jen’s Friends' events go directly to clients.

Funds are used to pay non-medical expenses, such as rent, utilities, groceries, and transportation costs to medical appointments.

Looking ahead to next year, which will be the 25th year of the hike and the organization, Chandler said, “We have all sorts of things in mind so stay tuned.”

For more information, go to jensfriends.org.