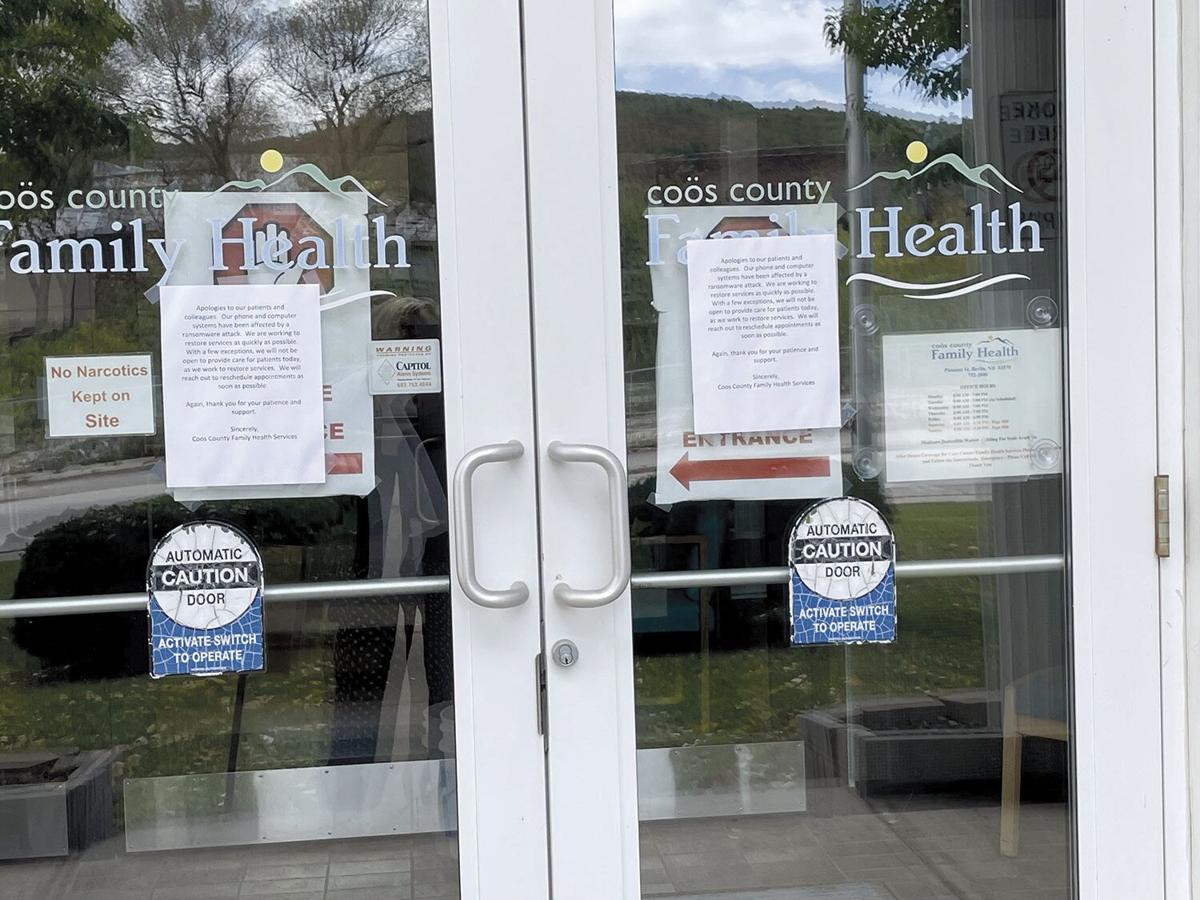 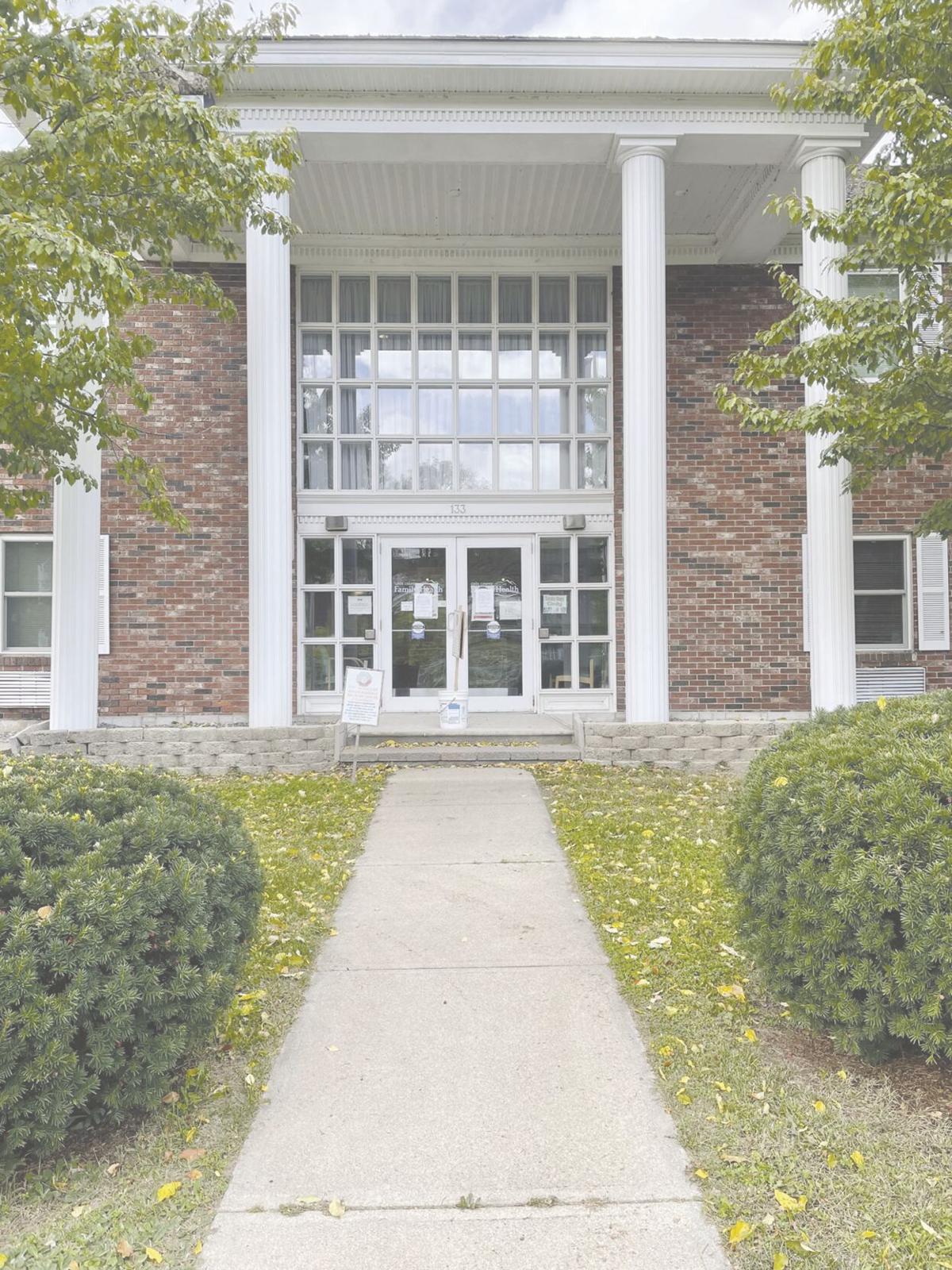 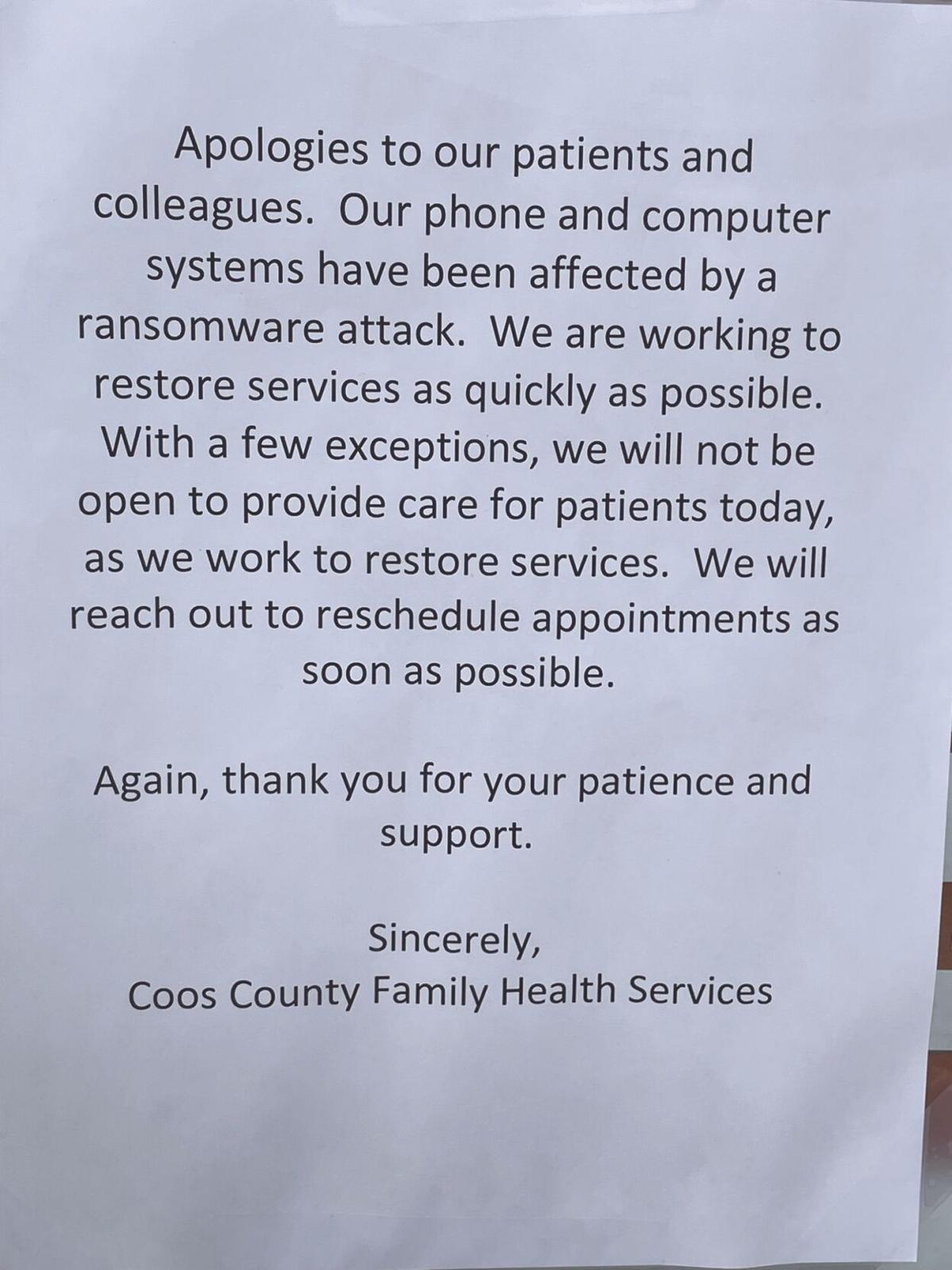 A sign on the front door of the Coos County Family Health Services building located at 133 Pleasant St. in Berlin notifies patients that the facility recently suffered a ransomware attack. (RITA DUBE PHOTO)

A sign on the front door of the Coos County Family Health Services building located at 133 Pleasant St. in Berlin notifies patients that the facility recently suffered a ransomware attack. (RITA DUBE PHOTO)

BERLIN — A ransomware attack this week shut down Coos County Family Health Services, a main provider of health services in the Androscoggin Valley.

Phone services had been partly restored by Thursday and all three of the organizations clinics were open for walk-in appointments after some were closed following Monday’s cyberattack.

Gordon said the non-profit organization noticed early Monday before its various clinics opened that there were abnormalities in how its systems were running. An examination revealed the entire system had been compromised. He said CCFHS shut down services and worked to prevent further activity on the system.

While he confirmed the system had been hit by a ransomware attack, he said he could not talk about the attack itself.

He emphasized there was no evidence that patient information was compromised. He said the organization hoped to have the entire system back up and running as soon as possible.

“We’re slowly in the process of rebuilding and standing things up,” Gordon said.

It operates a dental clinic at 73 Main St. in Berlin and also runs RESPONSE sites in Berlin, Lancaster and Colebrook, addressing the needs of survivors of domestic violence and sexual assault.

Gordon thanked CCFHS’s patients for their support and patience as the non-profit recovers and starts to reschedule appointments.

Gordon said the non-profit serves about 15,000 people annually and offers services on a sliding fee scale for those without insurance or with high deductibles.

Gordon said during COVID, many patients postponed routine health-care visits and there has been a push to reschedule those visits. The ransomware attack will delay some appointments just as Gordon said they were getting people caught up.

He said Coos County Family Health Services is constantly working to make sure its systems are secure and particularly in the last couple of years has invested in measures to guard against cyberattacks. That includes endpoint protection that secures access to the organization’s internal network.

Gordon said there has also been training for staff on using the computer properly.

“So, we really can say, with complete confidence that we’ve done everything any health-care or other company would do to protect its systems, and it was just our bad luck,” Gordon said.

He said the University of Vermont Medical Center was hit by a ransomware attack last fall. That attack affected more than 5,000 hospital computers and laptops that encrypted files and data on 1,300 servers.

The Association of American Medical Colleges reports that cyberattacks on health-care systems have spiked during the pandemic. Hackers gain entry to a computer system, encrypt the files that run it, and then demand payment for a decryption key to unlock access.

The U.S. government site Stop Ransomware reported that one ransomware attacker has targeted 16 U.S. health-care and first responder networks within the past year.