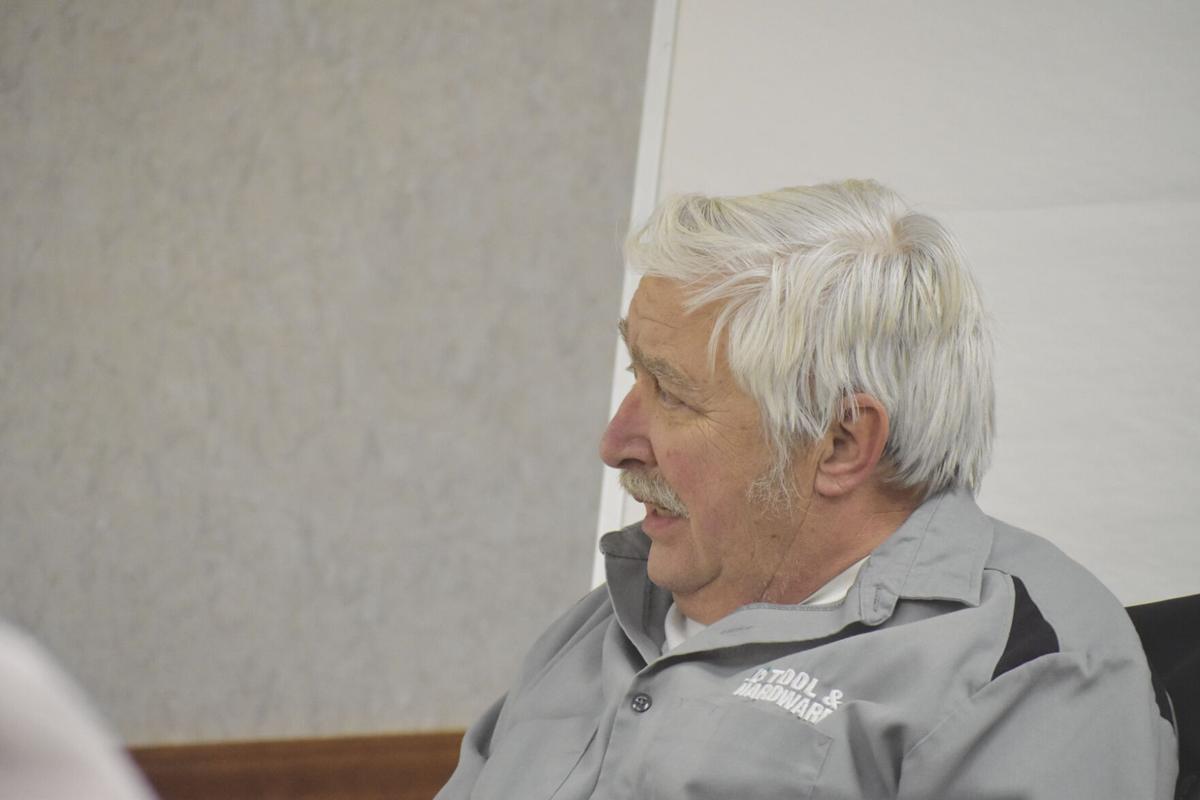 Carl Thibodeau is the only selectman who won't wear a mask during public meetings. (DAYMOND STEER PHOTO) 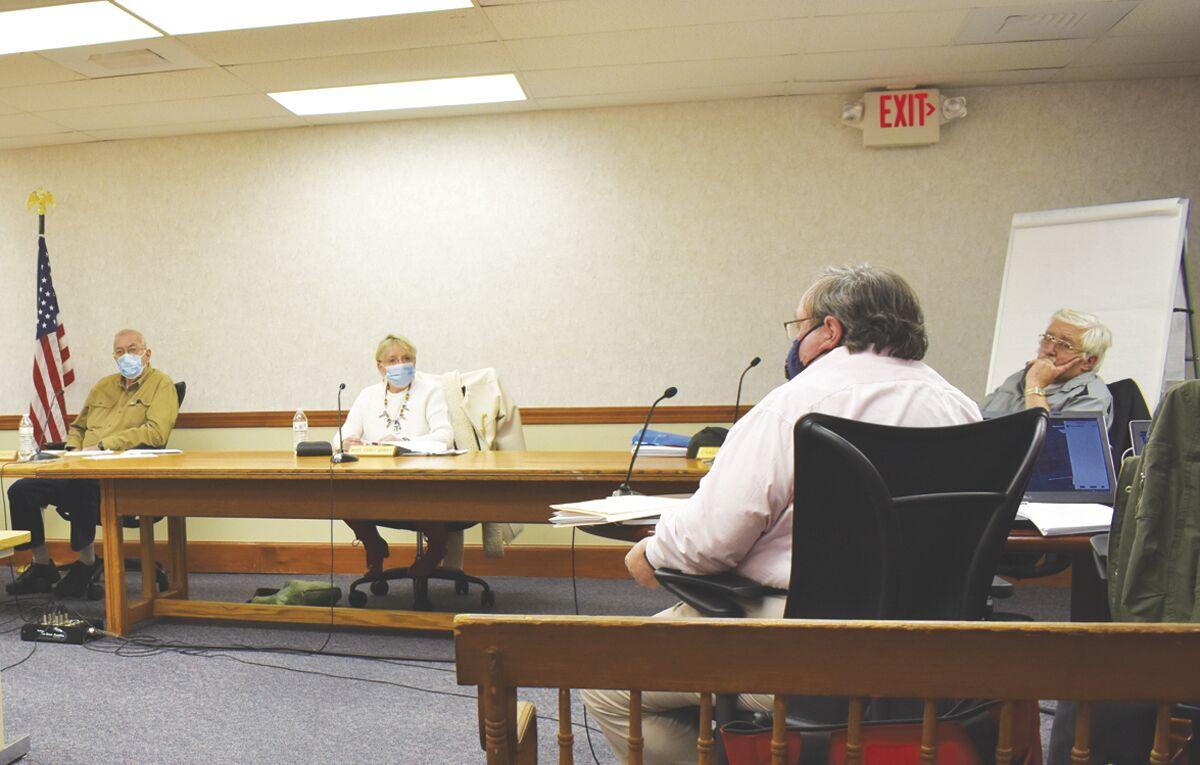 Carl Thibodeau is the only selectman who won't wear a mask during public meetings. (DAYMOND STEER PHOTO)

CONWAY — Those who have been watching Conway selectmen's meetings on Zoom or on TV (Valley Vision-Channel 3) may have noticed that four out of five selectmen are wearing masks — but one is not.

Thibodeau chooses not to wear a mask. He explained his choice in an email to the Sun on Tuesday.

“The state mandate is masks required when unable to maintain 6 feet distancing,” said Thibodeau in the email. “I wear one when coming, going or otherwise moving around. When seated, I am more than 6 feet away from anyone so I remove it. Shouldn’t be a problem for anyone.”

In a follow-up email Tuesday evening, Thibodeau said his stance is a “personal” preference and not intended to be a political statement.

Asked Wednesday morning about the mask policy at town hall, Weathers said by phone that at present, people who enter the town hall are supposed to wear a mask but can take it off if they are more than 6 feet away from another person.

Weathers added that he thinks people should social distance and also wear a mask to be “doubly safe.”

“It’s just a matter of trying to get the people in general to do it,” said Weathers.

Asked if he would want to mandate that everyone wear a mask, Weathers said he didn’t think he had the authority.

“According to the governor, if you are more than 6 feet away, socially distanced, it’s your option at that point,” said Weathers.

Asked if selectmen are operating under different rules than the public, Weathers said no.

“If you come into town hall, you should be wearing a mask,” said Weathers. “It says that right on the door. You can’t have a standard for one group of people and not the other.”

The Sun asked Thibodeau about the example he is setting for the public.

“The example from this leader is follow the rules," Thibodeau said. Those rules are, “Wear a mask when unable to maintain social distance and not needed when 6 feet apart or greater," he said.

Earlier this month, Gov. Chris Sununu at a press conference said, “For those out there refusing to wear masks to make some political point — it's horribly irresponsible. Use your heads. Stop acting like children."

Thibodeau said he thinks the governor is doing a great job and that he, Thibodeau, wears a mask when he waits on customers at his hardware store, JD Tool & Hardware in Conway Marketplace, and while he is frequenting other shops in town.

A Sun photographer Wednesday saw that Town Clerk Louise Inkell was wearing a mask. Another staffer in the town clerk’s office was not. However, a plexiglass window separates the office from the public.

Asked about masks, Inkell said she and her staff abide by the state and town policies. She said her staff wear masks in public areas of town hall and the parking lot.

As for the tax collector's office, "Inside our plexiglass “bubble," which is not defined as a public space in Emergency Order No.74 since it is not accessible to the general public, we are not required to wear a face covering," said Inkell.

"However, it is the comfort level of each employee as to how they interact with each other within our office space and with the customers on the other side of the plexiglass. We attempt to maintain a 6-foot distance at all times at our desks and have adjusted the service at the counter to allow that distancing," she said.

Asked to comment on the topic of masks worn at selectmen's meetings, the town manager cited a section of Sununu’s mask order , which says: “Beginning on Nov. 20, 2020, all persons over the age of 5 within the State of New Hampshire shall wear a mask or cloth face covering over their noses and mouths any time they are in public spaces, indoors or outdoors, where they are unable to or do not consistently maintain a physical distance of at least 6 feet from persons outside their own households."

The Sun pointed out to Holmes that the order also says that “nothing in this Order shall be construed to prevent municipalities within the State of New Hampshire from enacting their own ordinances related to the wearing of masks or cloth face coverings that contain stricter provisions than those contained within this Order."

Holmes said that he and Weathers had spoken about the mask mandate, and Holmes sent the board the following email on Nov. 20: "In light of the Governor's recent mask mandate, Chairman Weathers is requiring all attendees of Selectmen's meetings, board members, staff and public alike, wear a mask at the meeting at all times."

Selectman Seavey had replied to him, "Tom ... in addition to addressing mask, social distancing needs to be enforced ... Dave, Carl and I need to be seated 6 feet apart."

Thibodeau noted, "We clearly have enough room to separate the selectmen by 6 feet. It’s an either/or, not both. I am opposed to wearing a mask while seated 6 feet apart."

On Wednesday afternoon, the town of Ossipee posted to its website a message stating that town hall, freight house (where some town hall functions occur) and the transfer station are closed until further notice "due to positive COVID tests." Smith, by phone said there were only a few positive cases, and everyone is doing OK. He said the town facilities were closed due to an abundance of caution.

Meanwhile, based on TV footage of Madison selectmen's meeting, most people wear masks but Selectman Josh Shackford does not. Shackford said he sits next to his wife, town administrator Linda Shackford.

Shackford, a registered Republican who says he considers himself an independent, said he doesn't like masks because they fog up his glasses and makes it hard to talk clearly. He said selectmen's meetings are sparsely attended. He does wear a mask in larger gatherings.

Some local select boards, like Bartlett and Fryeburg, Maine, meet remotely with no in-person meetings.

People choosing to not wear a mask when at a distance from others that is 6 feet or more are not breaking any rules. Neither are those in the same scenario who choose to wear a mask.

Plenty of people who are not comfortable with others making a choice that is within the guidelines are often quick to go on the attack against them while ignoring what the guidelines state. Is this coming from fear, ignorance, laziness or possibly people wanting everyone to do things the way they see fit? The guidelines also allow people from different households and states to go to a restaurant and sit together in a booth right next to one another and eat, drink and socialize without masks and that’s never under attack even though they are likely sitting 6 feet from other parties doing the same thing while also not wearing masks.

Some postal workers choose not to wear masks while behind plexiglass and others have masks and gloves. It’s their choice. Is anyone attacking them?

Maybe the real issue is that people are so scared it’s just easier to attack your neighbor than to talk to your neighbor, question the guidelines or question anything.

The most valuable real estate in the world is the space between your ears. It seems we live in a time where we can’t be bothered listening to someone with a different point of view and respectfully disagreeing or trying to understand their feelings. It seems to me the “New Normal” is thinking everyone should do things the way you think and to hell with whatever anyone else thinks and anyone who doesn’t agree is wrong.

Here’s an elected public servant who cares for no one other than his own ego. Time to take out the trash!