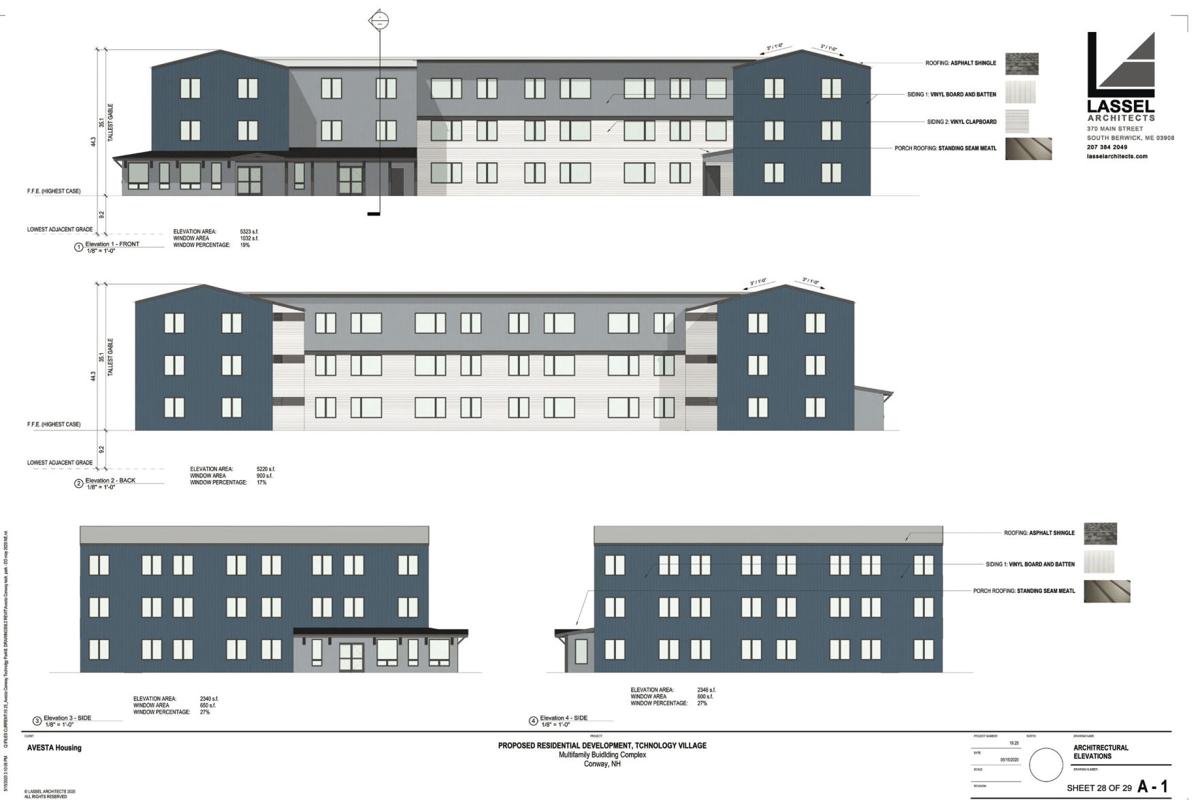 These elevations provided by Lassel Architects of South Berwick, Maine, show the front, back and sides of a multifamily residential building proposed by Avesta on Technology Lane in Conway. (COURTESY RENDERING) 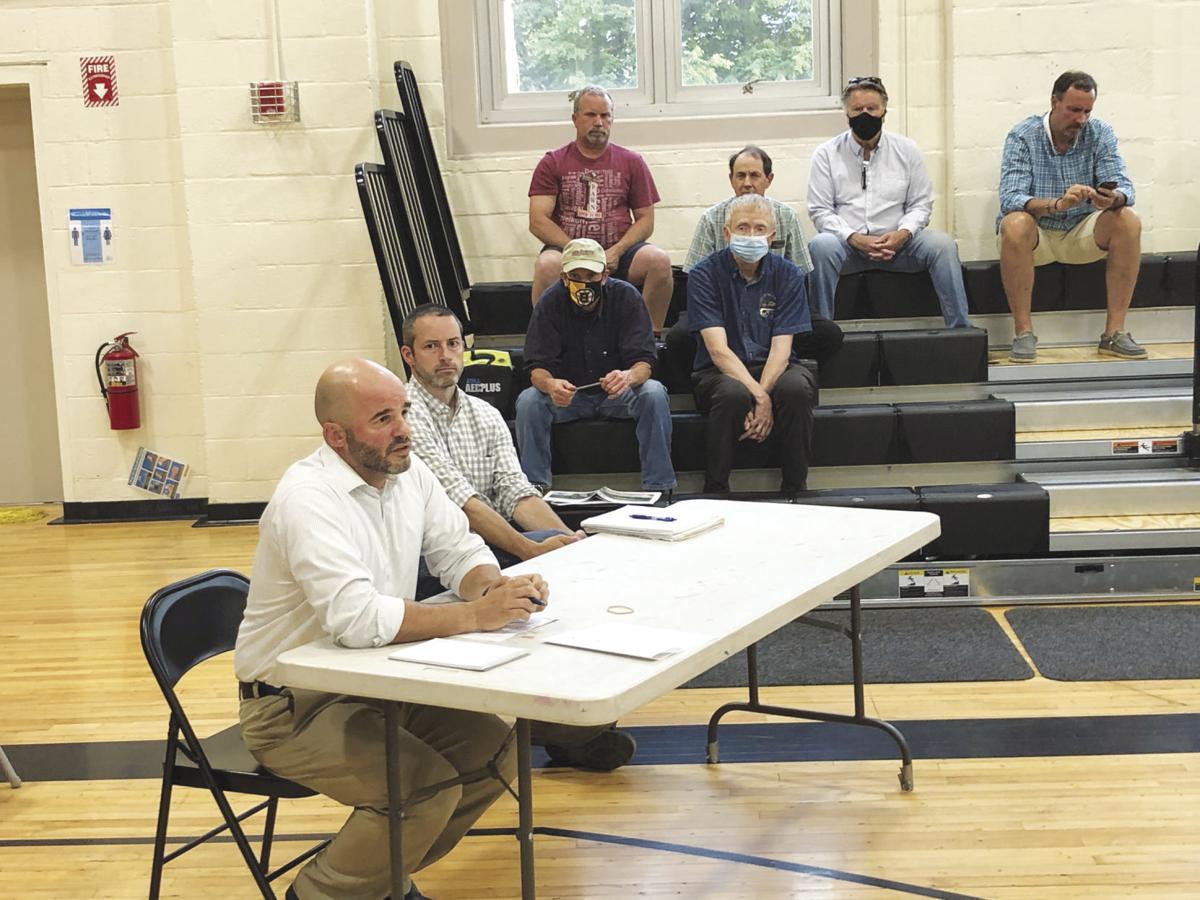 These elevations provided by Lassel Architects of South Berwick, Maine, show the front, back and sides of a multifamily residential building proposed by Avesta on Technology Lane in Conway. (COURTESY RENDERING)

CONWAY — The Conway Planning Board gave conditional approval on June 11 to Avesta Housing Development Corp. to put up 156 workforce and senior rental housing units off Technology Lane in Conway.

Avesta, a non-profit housing agency based in Portland, Maine, that owns and manager just over 90 properties in Maine and New Hampshire.

Technology Lane will be extended to a southern connection to Route 16 across from Merrill Farm Resort, with the units divided among four buildings.

At the meeting held at the Marshall Gym in Conway Village, Josh McAllister of HEB Engineers of North Conway represented the Tech Village business resource center, which is subdividing 61.1 acres into seven lots. Avesta was represented by development officer Patrick Hess of Portland.

The first building would be rental units for residents with no age restrictions.

“We are planning for the first building to have 29 one-bedroom units and 11 two-bedroom units, for a total of 40 in the three-story building, which like all of the planned buildings will be equipped with an elevator,” said Hess.

Senior rental housing would be in one of the other three buildings, Hess said. Building 2 will also have 40 units, while Buildings 3 and 4 will have 38 each. All four buildings will measure 12,619 square feet.

Hess said rental rates will be based on federal Housing and Urban Development rates, which are calculated based on median income levels.

"They change year to year, so by the time of occupancy it will shift some, but I expect, for example, under current HUD guidelines for Conway, a one-bedroom apartment for a person making 50 percent or less of the area median income would pay $800 a month including utilities," he said.

Now that Avesta has conditional planning board approval, Avesta will next apply for financing, including $800,000 in annual low-income housing tax credits, for a total of about $7 million over the life of the program.

“The building will cost more than that — we need to find additional sources of funding,” said Hess, who said the first building alone would cost $7 million-$9 million.

“We are working with the Economic Council and the town of Conway on applying for a Community Development Block Grant to support infrastructure for the project and selectmen in May gave their support. We would apply for a maximum of $500,000.”

He said Avesta would expect to hear back by December on whether it has received the funding from New Hampshire Housing and CDBG.

He said although the 61 acres are being subdivided by the Tech Village, Avesta is under contract to purchase only 37 acres of that total.

“We have not yet bought the parcel, but we have a purchase and sales agreement with the Mount Washington Valley Economic Council," which owns the Tech Village, said Hess. “We decided with the economic council that we didn’t need the entire 61 acres given the density of our proposed development.”

The site is serviced by municipal sewer and water, which allows for greater density.

The project is abutted to the south by RWN Real Estate Holdings LLC and residentially zoned property owned by Robert W. Nelson off Emery Lane behind the Army Barracks store and to the west by Phoebe's Lodge and the Merrill Cemetery.

The undeveloped portions of the property abut both Lamplighter Mobile Home Park and Evergreen-on-the-Saco but not the developed four-building project. A few Evergreen residents attended the meeting at the Marshall Gym, where acoustics were difficult.

Evergreen-on-the-Saco President Robert DiPace wanted to ensure that access to the Conway Rec Path would be protected as a condition of approval. The planning board unanimously approved that as a condition.

Evergreen residents Tony and Maura Ammendolia also wanted to make sure property management would be on site. Hess said it would be.

In response to a question by selectmen’s representative Steve Porter about whether Avesta allows its properties to be used for short-term rentals, Hess  said he did not believe Avesta allows that use. He confirmed to the Sun later that is correct.

The Technology Lane site was selected by Avesta after an initial proposal to develop the project on Banfill Road off Tasker Hill Road was dropped in 2019 due to state wetland issues and concerns raised by abutters.

Porter pointed out that the Tasker Hill site "would not have been capable of handling increased traffic, whereas at the Tech Village, it is closer to town, the roads are better, and it is equipped with municipal water and sewer. So it makes more sense, and it helps the Tech Village.

"I think this is the sort of investment we need more of in the valley for people who want to be able to afford to stay and work here and for our seniors,” Porter said.

Speaking out at the planning board meeting in support of the project was Harrison Kanzler, executive director of the MWV Housing Coalition. Following the meeting, McAllister of HEB and a member of the MWV Housing Coalition, agreed that the project will help increase the stock of affordable rental housing in the valley, noting, "It's another opportunity to help address that need."

Avesta is a non-profit affordable housing provider founded in 1972.

For more, go to avestahousing.org.

$800 a month for a one-bedroom apartment for someone making $10 an hour in a most part-time job because employers don't want to pay benefits, would be ell over half their take-home pay. This would leave them with little money to make their car payments, insurance, gas to get to that job, let alone, medical bills, food, and other expenses. This is not affordable housing in an area with low paying jobs.