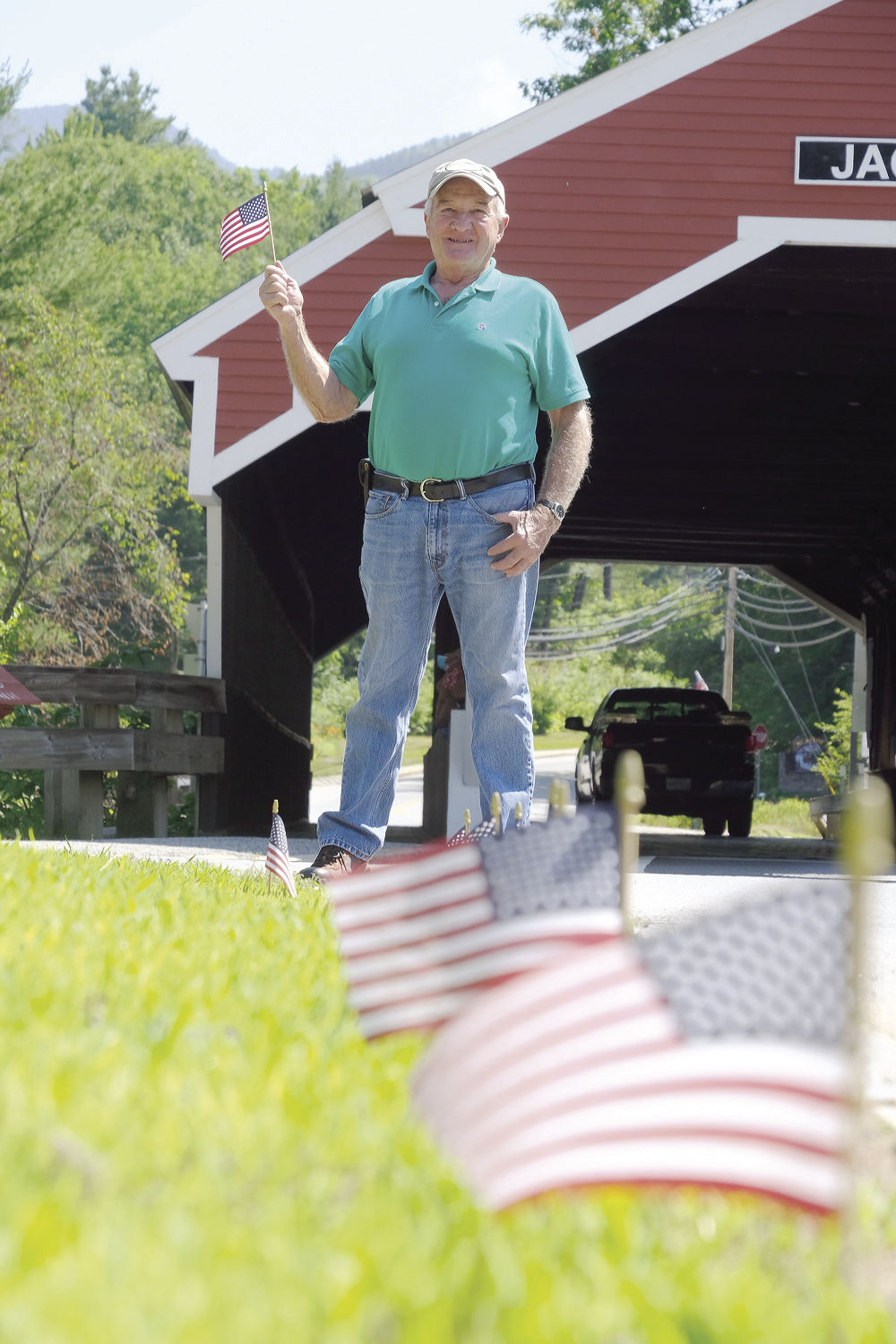 Henry Mock of Intervale is one of the organizers and volunteers who put out the hundreds of small American flags along several spots in the valley for the Fourth of July holiday. Mock is pictured at the Jackson covered bridge Thursday where there are dozens ling the green areas and in front of the informational sign. (JAMIE GEMMITI PHOTO) 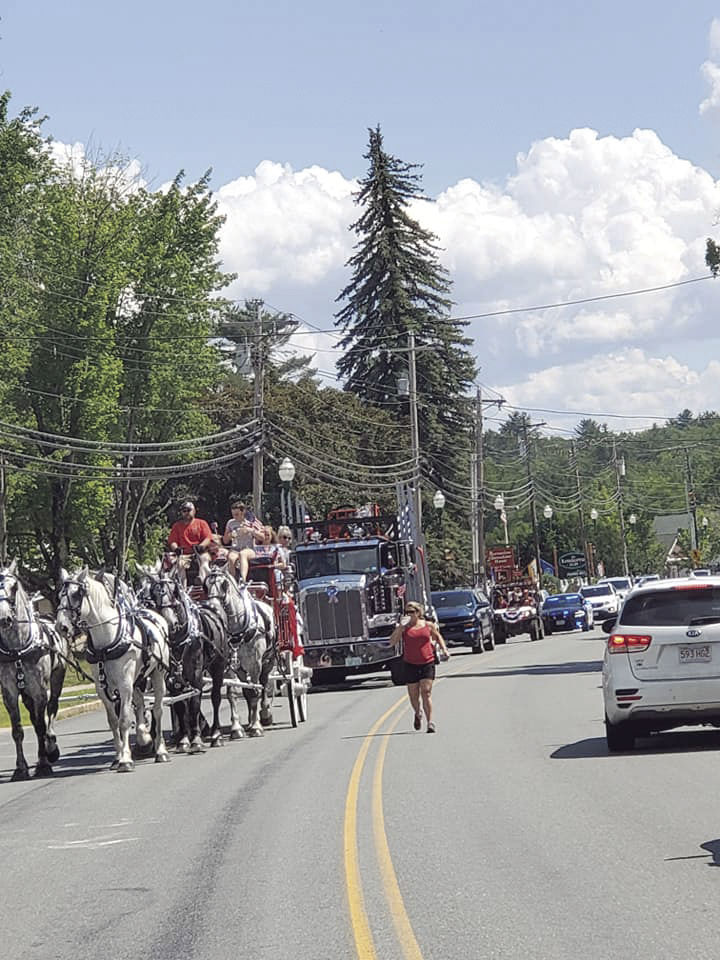 Justin Hussey leads his team of six Percheron horses and a couple of floats during an impromptu Fourth of July Parade in North Conway last Saturday. (COURTESY PHOTO)

Henry Mock of Intervale is one of the organizers and volunteers who put out the hundreds of small American flags along several spots in the valley for the Fourth of July holiday. Mock is pictured at the Jackson covered bridge Thursday where there are dozens ling the green areas and in front of the informational sign. (JAMIE GEMMITI PHOTO)

Justin Hussey leads his team of six Percheron horses and a couple of floats during an impromptu Fourth of July Parade in North Conway last Saturday. (COURTESY PHOTO)

CONWAY — It was truly a Fourth of July like no other due to the COVID-19 pandemic, but a few citizens did their part to help celebrate the nation’s 244th birthday by placing 1,000 American flags throughout Conway, North Conway, Bartlett and Jackson.

Decking the towns red, white and blue was the brainstorm of former state representative Henry Mock of Bartlett.

“We were sitting around on July 2 or July 3 and just talking about the Fourth of July, and how there were not going to be any parades and very few firework displays planned,” he said. “It was so demoralizing. It seemed like we could pull off a parade where the participants socially distanced. It seemed like the town (hall) folks just went, ‘Cancel, cancel, cancel’ to just about everything.

“We thought that with just a little bit of work we could do something patriot to celebrate the Fourth. I came up with the idea of why don’t we buy a bunch of small American flags and secretly place them prominently around the towns of Conway, Bartlett and Jackson.”

Mock and friends “aged 23-83,” including Gene Chandler of Bartlett and Terry and Frank McCarthy of Conway, chipped in “a few dollars,” and then set out the evening of July 3 at approximately 7 p.m., decorating the towns with flags.

“We let the Conway, Jackson and Bartlett police departments know what we were going to do, and they were OK with it,” Mock said.

“We knew there were no flags in North Conway and wanted to make sure there were a few,” Frank McCarthy said by phone Thursday. “I’m happy to see a number of them are still there, especially in Schouler Park.”

“We all went off in our different directions on Friday night and placed the flags,” Mock said. “I think people liked it. I’ve heard several positive comments. This was a prime example of citizens willing to pitch in to make something happen. It’s very similar to the Shaw Family holding a parade in North Conway on the Fourth. It doesn’t take much effort. A lot of people were tickled.”

The Shaw Family from Conway did do a parade through North Conway Village on Saturday with complete with a team of six Percheron horses pulling a wagon and a couple of floats.

“What a day! I can’t tell you how much I love a parade — especially through my hometown,” wrote Gredel Shaw on Facebook. “I love the 4th of July way more than the average person and way more than you can imagine. Despite the current climate in our nation, this is still the greatest country on earth and I am proud to be an American. I have amazing friends and an equally wonderful family, which makes me rich beyond words. A big shout out to the Hussey Family for their hard work today. The horses are beautiful and the legacy they’re carrying forward is immeasurable. Doc would be proud.”

Mock said he’d like to see the country more united.

“Another reason we did this,” Mock shared by phone Thursday, “A prime example was on July 3 and July 4 we had the $2 million state area restroom at the Scenic Vista Overlook closed and locked. There were no public restrooms, yet in the meantime, we invite all these people from all the other states to come here. If you can walk into a restaurant and eat, why can’t we have an attendant at the Scenic Vista there to greet people and let them use the facilities.”

He added: “Several years ago, I volunteered (to the state) to work three mornings a week there for free. And, you know, I was rejected. The only reason the commissioner gave me was, ‘I don’t know what our full-time people would think if we used volunteers there.’ I don’t know why it’s not open. I think Gov. (Chris) Sununu needs to tell us why all of the state rest areas are still closed.”

This was great. Hoping they're also going to remove and properly dispose of the flags before they become soiled.