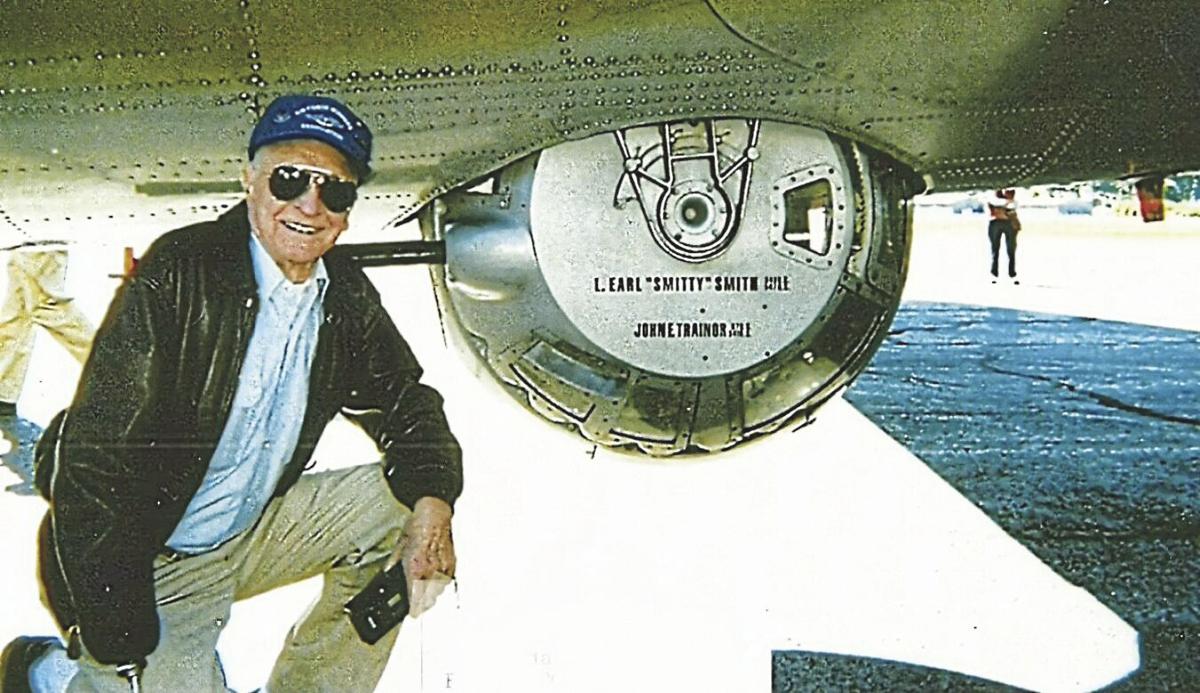 Smitty next to B-17 ball turret. 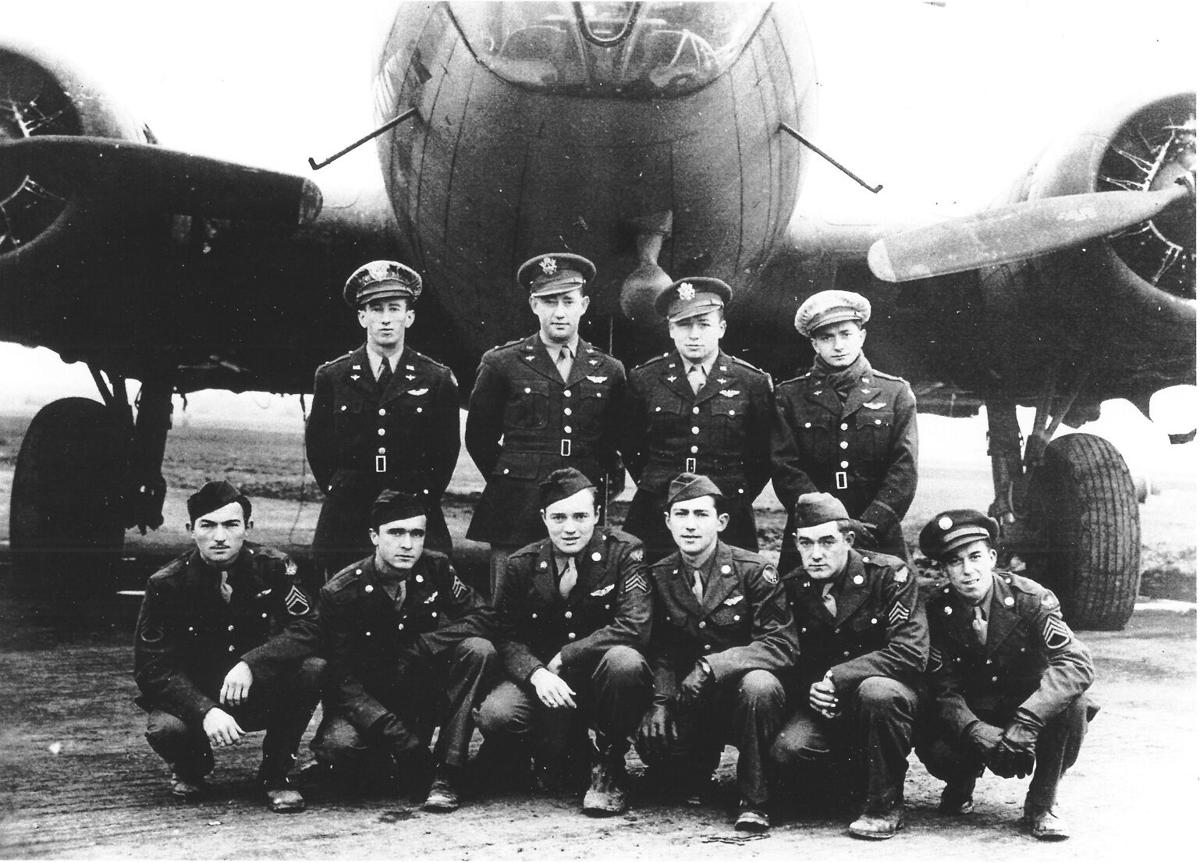 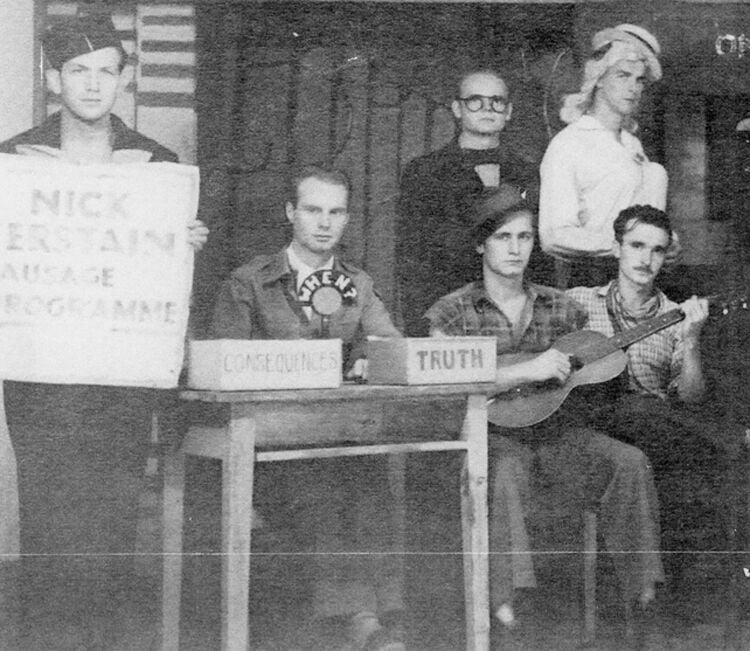 Smitty (seated fourth from left), who lost his right hand, is seen with an airman who lost his left hand. They are at a talent show in a POW camp. 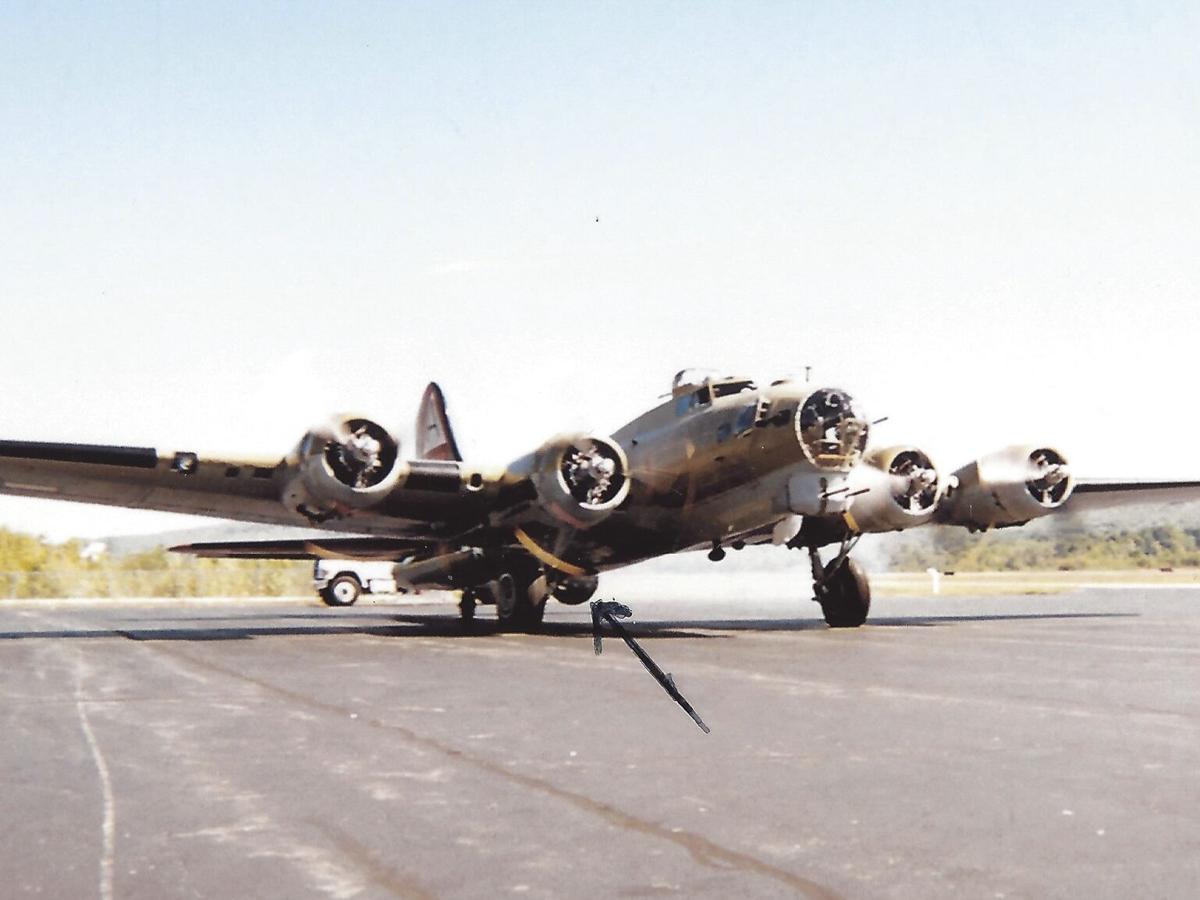 Smitty and sons are on this B-17, note the ball turret is in the middle underside (belly) of the plane.

At 98 years, on April 8, 2021, Luther Earl Smith “Smitty,” World War II vet, 8th Army Air Corps, B-17 ball turret (belly) gunner, POW and purple heart recipient, the last member alive of his great 10 man crew (whom he considered like family) left this earth. He was an upbeat guy and kept a positive attitude to his last breath. All three sons were visiting him three days before his passing and when asked how he was doing, he replied “Top of the world!”

Smitty was born Luther Earl Smith Feb 19, 1923 in Stow, Maine, to Luther Augustus Smith and Carrie Libby Smith. He was predeceased by both parents, his former wife Charlotte Perkins Smith (who was a loving caring mother and grandmother) and his two sisters Dora Smith Harrington and Doris Smith Graves.

He is survived by his three sons, Bruce E. Smith of Lovell, Maine; Daryl E. Smith of Conway N.H.; and Brian A. Smith of North Conway, all of whom “loved his positive can-do attitude and agreed that he was the best father a son could have.” He is also survived by his grandchildren, Katie L. Smith, Emily Smith Mossman and Jennifer J. Julian all of North Conway; Jessica Smith Fahey of Lovell, Maine; Carla Smith Kephart of Spencer, Mass.; and Daryl E. Smith Jr. of Bellows Falls Vt. There are several great- and great-great-grandchildren and nieces and nephews, all of whom knew him as “grampy with a hook.”

As a kid growing up in Stow and Fryeburg, Maine, he always dreamed of and wanted to fly! When the war came he was 19 and enlisted on Oct 13, 1942, in the Army Air Corps and became a ball turret (belly) gunner on a B-17 Flying Fortress bomber. They flew missions from England to targets in Germany.

His first mission was on Dec 13, 1943. He would experience three major forced (crash) landings before being shot down during “Big Week” on his 14th and final mission in February, Washington’s birthday, 1944. So three days after his 21st birthday his plane was shot down, he was wounded and lost a hand, took his first and last parachute jump and became a POW for about eight months (which he always referred to as being a guest of the German government). Whew!

His whole courageous 10 man crew of “Winsome Winn 2” made it through the war alive and Dad kept in touch with them all his life. He always thought of them as brothers so in his and their honor here are their last names: Hunt, DeFrees, Moody, Miller, Hallam, Wright, Ecker, Moore, Kushner and dad.

There is one picture and story we wanted to share that reflects his ingenuity and resourcefulness. In September of 1944, he was moved to a POW camp that was for the exchange of prisoners (he was coming home). He said they were treated a lot better there and the prisoners were allowed to put on a variety show. Dad, who had lost his right hand, became friends with an airman who had lost his left hand. In their conversations, they discovered that before their injuries they both had played guitar and sang similar music. They wondered if they could work together and play one guitar. Well, they could and did and became a major part of the show, bringing the house down!

There are excellent detailed articles on the internet about Smitty done by his friend and ace writer Tom Eastman of The Conway Daily Sun. They are as follows: “A farewell salute to Smitty” April 10, 2021; “The Greatest Generation” Nov. 7, 2020; “Smitty, World War 2 vet shares his stories,” Nov. 10, 2012.

He came home from the service in the fall of 1944 just in time for hunting season. He was officially discharged on April 26, 1945, bought a motorcycle and was off, loving the free feeling ride with the wind in his hair. In the summer of 1946, he bought the first new Harley Davidson sold in the state of Maine after the war. He road to the Laconia bike week with Charlotte Perkins and got married. While there, they were nominated for King and Queen of the festival. Funny how things happen, turns out that nine months later the first of three sons arrived.

Jobs were very scarce after the war, and he did several things, including mowing the roadsides, being a fire tower ranger on Pleasant Mountain, becoming a gunsmith and a Maine hunting guide. He ended up scoring the highest on the Civil Service exam and became an RFD letter carrier in Lovell, which he did until he retired.

He never had a chance to grow up with his father who died when he was a very young boy, so I think he was determined that he would be a major part of his kids’ lives. He was always there for his three sons teaching us all hunting, fishing, trapping and to play guitar, baseball, basketball, football and water skiing (he was an excellent slalom skier). Wonder how he taught us all to play guitar with one hand? He did some figuring and fashioned a piece of wood with a slit on the end where he put the pick (plectrum). He wrapped two Mason jar rubbers around the stick and his arm and viola! He played with us like that for over 80 years.

For the last 34 years, he has lived in Conway. He gave freely of his time to several organizations and schools. Sharing his experience and story he volunteered at the Wright Museum of World War II in Wolfeboro, N.H., the vintage aircraft living history Collings Foundation, the local RSVP organization and to school kids learning about history and the war.

About 23 years ago, he was instrumental along with a great group of local World War II airmen in starting the Grey Eagles. The idea was to have a small group get together a couple times a year for lunch and just relax and share stories. It started with a couple dozen veterans and eventually grew to over 150. I think one reason for the success was their slogan, “No rules, no dues, everyone is a general.”

In September of 2007, while visiting a Collings Vintage Airshow, two sons were able to take a 35 minute flight with Smitty on one of only nine airworthy existing original B-17s in the United States. The picture here is the actual plane with us all aboard taxiing down the runway. It was a heartwarming, almost spiritual experience for all of us!

He loved the outdoors, freedom and young people. He hated laziness, bullshitters and tomatoes (forced to eat them at age 7 he successfully avoided them for the next 91 years). Every member of his family is left with many life lessons of survival and simple mantras to lessen the stress of everyday noise and give the day a pleasant feeling. One lesson repeated often was to “take time to smell the roses.” He was giving, nonjudgmental and loved everyone in his life unconditionally.

He sure was a great guy, a colorful character and a fixture in the valley. He also was very humble so as per his final wishes there will be no formal services or celebrations. He said “When my life is done, so let it be done.”

The family deeply appreciates all the warm condolences and heartfelt messages. A special thanks to everyone at the local Conway VA center for their compassionate care, as well as the Gibson Senior Center for the delicious meals and beautiful handmade quilt.

If you wish in his memory: please do good deeds, consider a contribution to the Gibson Senior Center or local RSVP or a charity of your choice and most importantly to a vet or current military man or woman “thank them for their service.” So we will close with the motto of his World War II 8th Army Air Corps 384th bomb group, which he would often say whenever a delay, setback or adversity occurred: “Keep the show on the road!”

Amen to a great veteran and man. My condolences to you and your family.