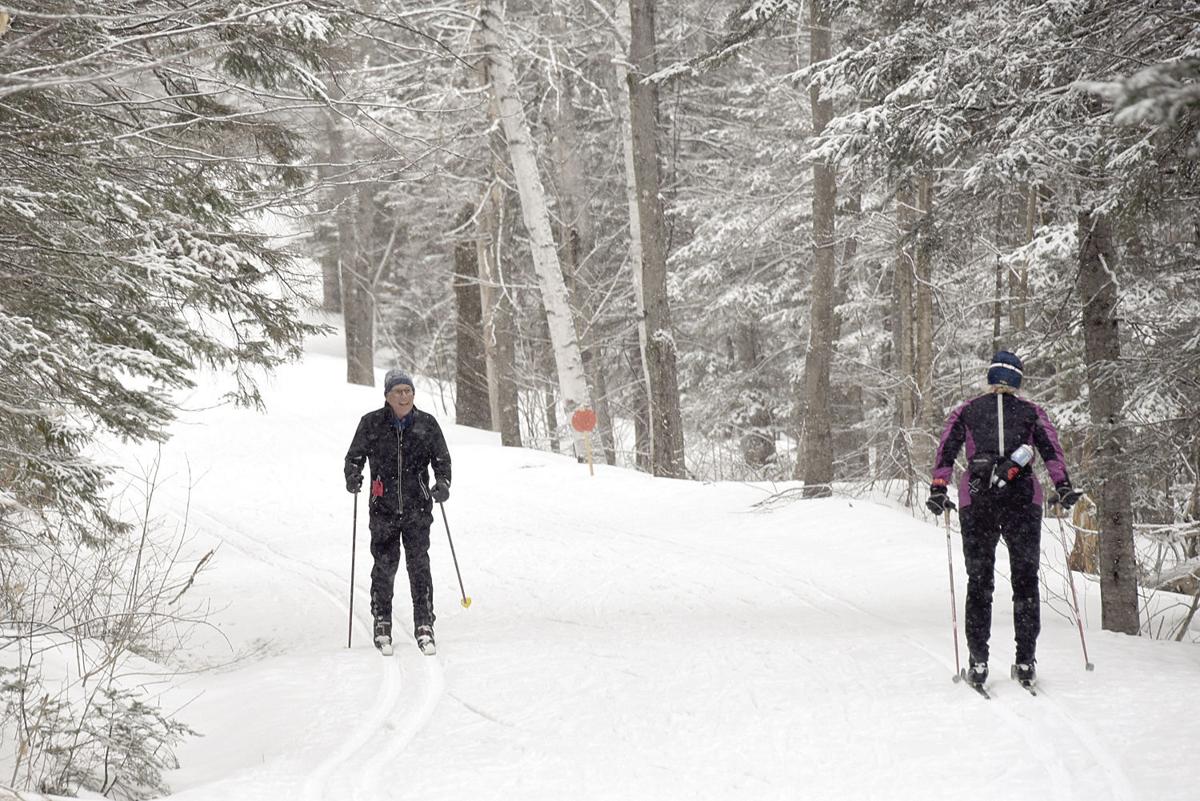 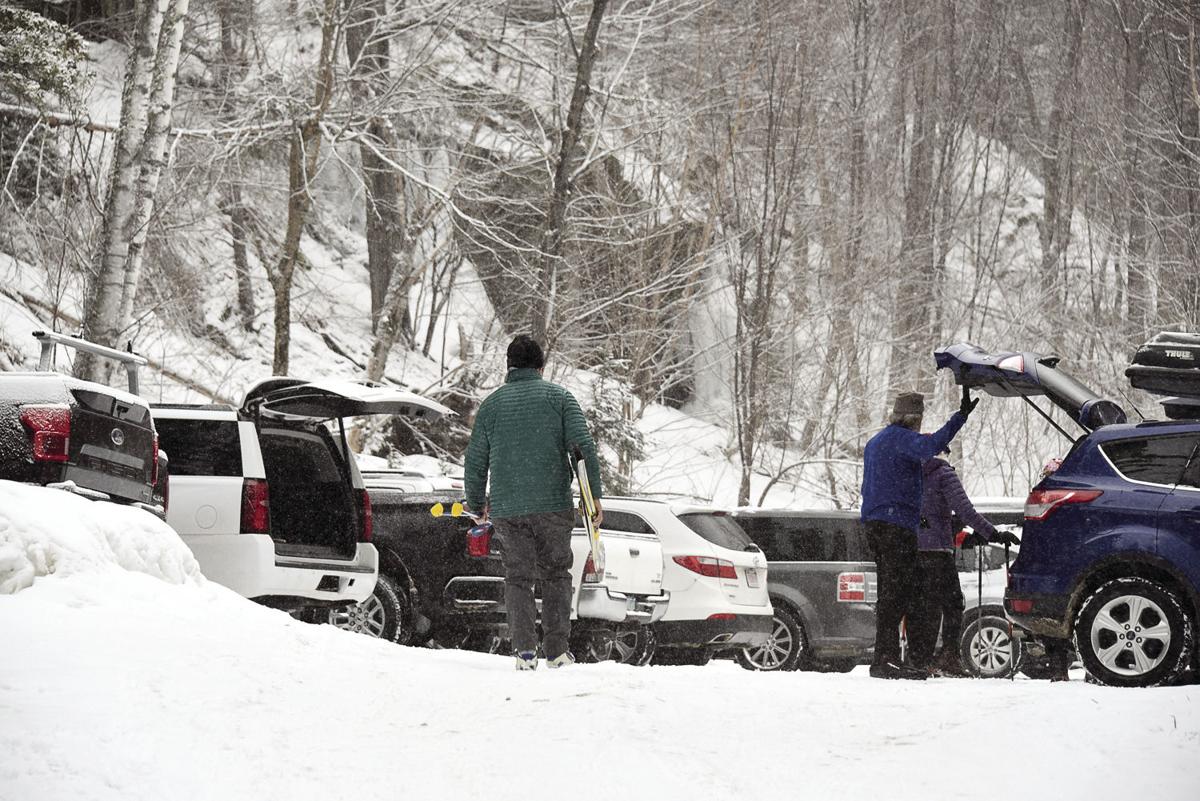 Skiers prepare to get on the trail at the Prospect Mountain parking lot which was full Tuesday. (JAMIE GEMMITI PHOTO)

Skiers prepare to get on the trail at the Prospect Mountain parking lot which was full Tuesday. (JAMIE GEMMITI PHOTO)

CONWAY — Spring skiing is a time of year that snow sports enthusiasts look forward to every year. But concerns about the coronavirus have led many areas to close two weeks sooner than planned and others to institute precautionary measures to try to contain the spread of the virus.

The concern led to the cancellation of many venerable ski events, including the time-honored Red Parka Pub Challenge Cup that was scheduled for Friday at Attitash — and Vail Resorts, the owner of Wildcat and Attitash, on Tuesday announced it was closing all Vail resorts for the rest of the season.

Concerns also led resorts to cancel their end-of-season race league parties, including King Pine’s Pioneer Race Series awards bash that was set for Monday, Great Glen Trails’ Nordic Meisters party and the Attitash Race League, both Tuesday, and the Cranmore Mountain Meisters awards party today. (A few of those awards parties will be held at a later date, but details are so far on hold).

Areas Bretton Woods in Crawford Notch and Cannon Mountain in Franconia remain open, though they have closed off areas of their facilities.

Cannon is operating on a “day-to-day basis based on direction from the governor’s office.” Cannon closed the aerial tramway, base and summit buildings, along with rental and repair shops. The food court offers takeout only.

Jackson Ski Touring and Bear Notch Ski Touring remain open but have closed off base lodge areas and ski programs.

“I think open air is where it’s at,” said Doug Garland, co-owner with his brothers of Bear Notch in Bartlett.

The ski touring center has long been known for offering an honor system for its hot soups. For now, soups have been discontinued, though the honor system remains for those wanting to drop money into a bucket for ticket purchases, noted Garland. He said Bear Notch will continue to do equipment rentals on the porch but encourage people to call ahead if they need rentals.

“Grooming and the office are open. No rentals, no programs. Trail crew (daytime) is working no more than two together outdoors,” she said. “It’s a time of year when we naturally slow down. Actual operations are similar to what they should be two weeks from now. So the business impact is less than it would be at almost any other time of year. We closed the center to any congregating.”

Bretton Woods closed off parts of the alpine base lodge and asks patrons to put boots on in the parking lot.

Tuesday being St. Patrick’s Day, Bretton Woods continued to offer its buy one ticket, buy a second for $17 in honor of the holiday, but there were restrictions that made it different from any St. Patrick’s Day in memory.

“Ride the lifts with members of your own party only and respect other riders who are trying to do the same,” read Tuesday’s snow report.

“Use the hand sanitizing stations and adhere to the guidelines from Centers for Disease Control (CDC) and the World Health Organization (WHO), along with state and federal guidelines regarding social distancing that you have been hearing about in the news.”

Cranmore confirmed on Tuesday that it would not be reopening, with Wilcox stating, “We have seen a lot of things but never anything like this — it is a real zinger, not only for us but for all of the valley.”

The resort sent the following email to passholders Sunday morning: “We have made the difficult decision to suspend all resort operations beginning March 16, 2020, and will evaluate remaining season operations in the next seven days. ... If you have pre-purchased spring tickets or products, you may contact us for a refund by calling us at (603) 356-5544, Ext. 242 or emailing us at info@cranmore.com. Thank you for your patience and understanding during this time.”

Wilcox noted that “if there is any silver lining to this, it didn’t happen at the height of the season December through February, but March is still an important time for our resort. We will regroup and begin setting our sights on the coming summer.”

The Mountain Meister race series saw its season end abruptly. The following email was sent to racers Sunday: “Sad news, after today Cranmore will be closing down. So there will be no racing this coming Wednesday. Stay tuned for how we will get out awards and such. Thank you all for a great season and hope to see you all next year.”

Vail Resorts, a global operator of 37 areas, including Attitash and Wildcat, which it purchased from Peak Resorts this past fall, said Tuesday:

“Given the current situation involving the impact of coronavirus (COVID-19) on our communities, we have now made a decision that our North American resorts and retail stores will remain closed for the 2019-20 winter ski season. Dependent on the situation with COVID-19, and pending weather conditions, we will consider reopening Breckenridge in Colorado, Heavenly in Lake Tahoe and Whistler Blackcomb in British Columbia in late April/early May.”

“While it is incredibly disappointing for us to mark the end of the season at this time, we know it is the most responsible path forward,” the statement said, adding that refunds can be addressed online at snow.com.

General Manager Andrew Mahoney said, “As regularly occurs at the end of our season, department managers and our human resources will also be working with staff to close the season and be looking ahead to plans for next winter or will be transitioning to other departments within King Pine, Purity Spring Resort, Camp Tohkomeupog or Danforth Bay Camping & RV Resort that are preparing for the spring and summer operating seasons.”

Great Glen Trails Outdoor Center closed for the season Sunday due to coronavirus concerns. The MWV Ski Touring and Snowshoe Association has suspended grooming operations and is effectively closed due to the lateness of the season and snow cover, said spokesman Dennis McKinnon.

Ski NH Executive Director Jessyca Keeler and Business Manager Shannon Dunfey-Ball said Tuesday that New Hampshire’s ski areas are committed to doing their utmost to protect the health of their employees and customers.

“To date, the approach to do this by resort has varied. Many of our ski areas have closed temporarily or for the season. Several have remained open but with limited operations. For those ski areas that have chosen to remain open, we know they are evaluating the situation day by day. As plans change, they will be shared via the resort links on the Ski NH website at skinh.com/covid-19.”