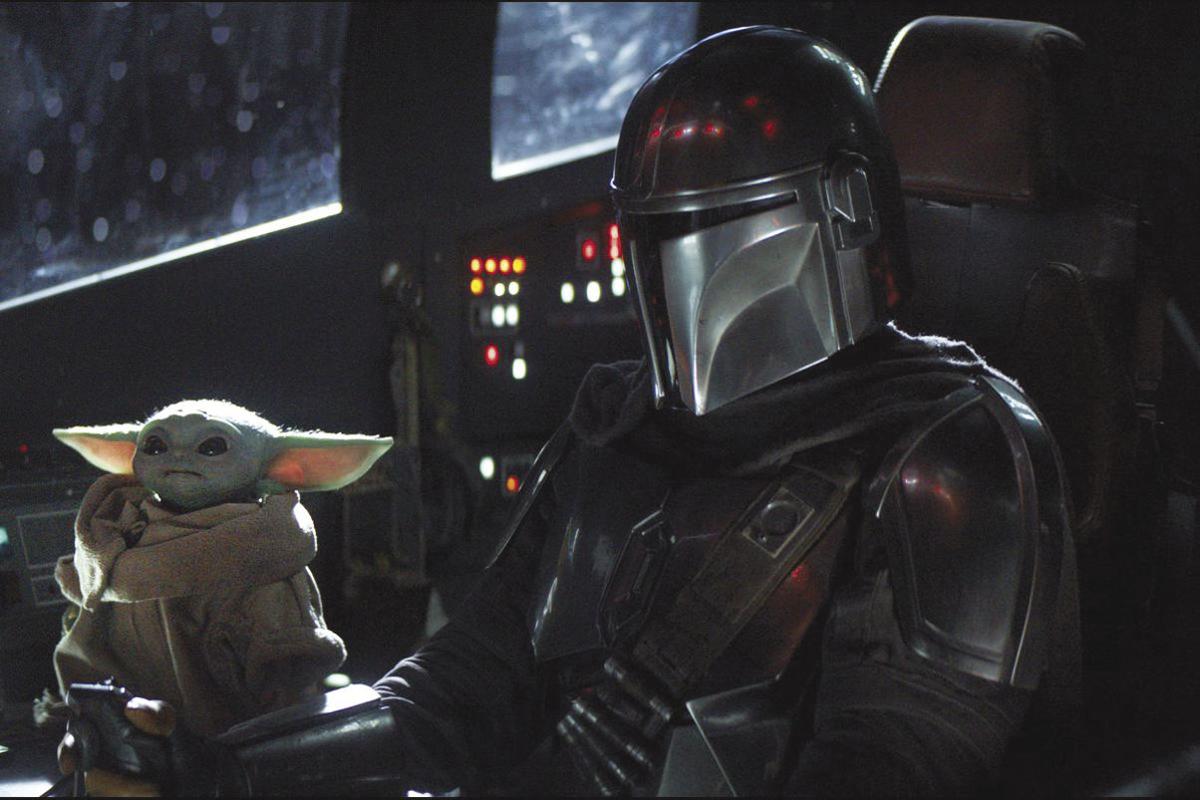 The Child — lovingly dubbed Baby Yoda by fans — sits with the title character of "The Mandalorian," the first live-action "Star Wars" TV series. (COURTESY OF DISNEY) 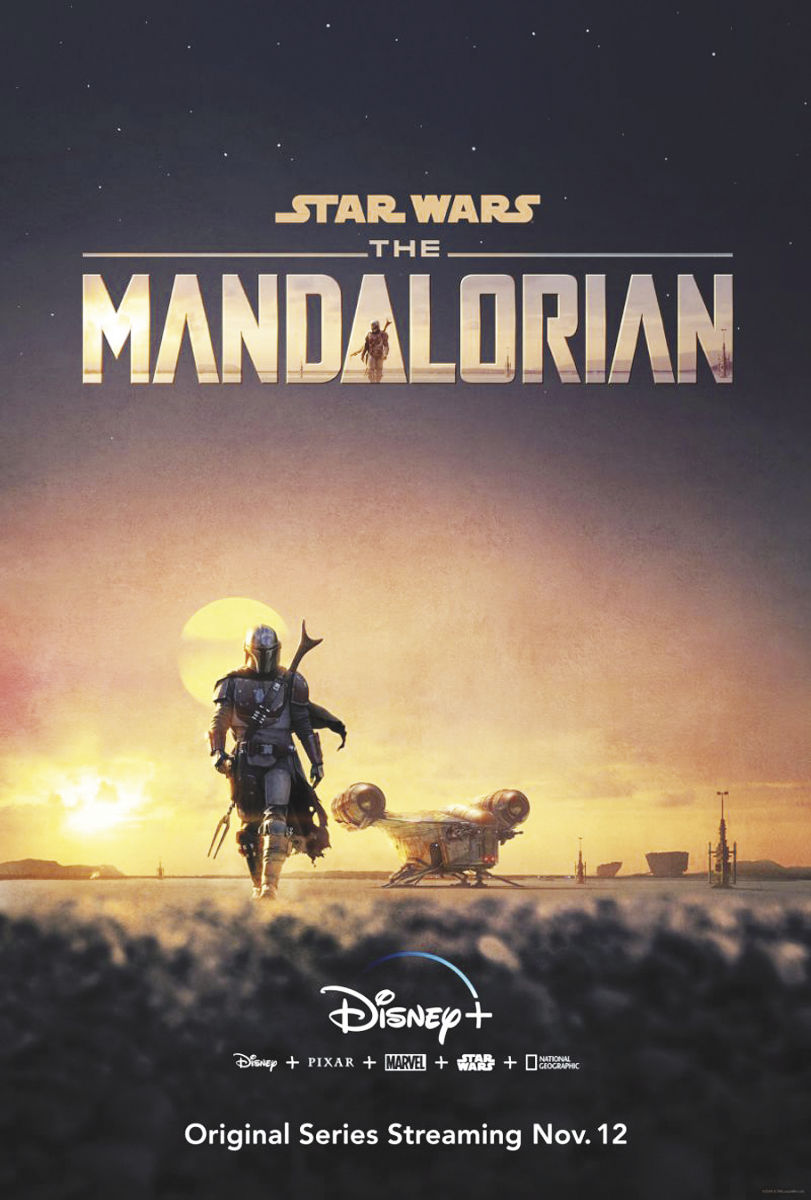 With today’s release of “Star Wars: The Rise of Skywalker,” the nine-film Skywalker saga that started in 1977 comes to a close. But while “Rise of Skywalker” marks the end of an era, the Disney+ series “The Mandalorian,” the first live-action “Star Wars” TV series, points to a promising new direction for the “Star Wars” franchise.

When Disney purchased LucasFilms in 2012, there was the promise of not only the three final episodes of Lucas’ space opera but side adventures from other parts of the timeline and universe.

So far, all “Star Wars” films and series — both pre- and post-Disney — have been related to the Skywalker saga. “Rogue One” was a direct prequel to the events that opened the original “Star Wars” in 1977;” “Solo” showed a younger Han Solo; and the animated shows “Clone Wars,” “Rebels” and “Resistance” take place during different points between the films.

While “The Mandalorian” does exist in the timeline of the episodic film series — it is set in the aftermath of the fall of empire as seen in “Return of the Jedi” — it has nothing to do with the various characters and plots we’ve previously seen. Instead, we are introduced to a succession of new characters and locations (although there is a return to Tatooine).

While Lucas’ original “Star Wars” and its subsequent films were mythic fables complete with knights and princesses, “The Mandalorian” is a western with an honorable gunslinger for hire bouncing about the universe.

The titular hero (Pedro Pascal) is a bounty hunter and just one of a small-number of mandalorians, a group that follows a specific code. This includes never removing the helmets that obscure their faces. As he has no name, those he encounters simply call him Mando.

The Mandalorian’s look is patterned on that of Boba Fett, a character whose appeal is solely based on his appearance since the character is more of a plot point than a figure of any substance.

There has been some discussion of a Boba Fett film that would further flesh him out, but “The Mandalorian” series is a much better option, as it allows Boba Fett’s cool look to be borrowed without being limited by a character whose beginning and outcome is already known.

Created by Jon Favreau, who wrote most of the episodes himself, the series is closer in spirit to Joss Whedon’s short-lived space western series “Firefly” than “Star Wars.” The biggest difference is there is a lack of the quip-filled dialogue associated with Whedon.

There is humor in the show, but Favreau is a different writer than Whedon. Favreau, who got his start writing and starring in films like “Swingers” and “Made” before graduating to directing films like “Iron Man,” “The Jungle Book” and this year’s “The Lion King,” tends to find humor in situations and through characters rather than one-liners. This holds true for “The Mandalorian,” which takes on a low-key, dry sense of humor befitting its stoic lead.

And then there’s what the internet has lovely dubbed Baby Yoda (no relation). This young alien, who appears to be the same species as the lovable backward-talking Jedi master, is the bounty in the first episode. Upon seeing the adorable bundle, Mando can’t go through with handing him over, and we can’t blame him. There’s a reason Baby Yoda memes are everywhere on the internet.

The rest of the series is Mando protecting The Child while going on a string of missions. For the most part, the series is episodic in nature with a villain-of-the-week formula. It is Mando’s reluctant father-son relationship with The Child that gives the show its emotional core as well as it overarching story.

There’s a great list of character actors who pop up for one or two episodes, including Werner Herzog, Carl Weathers, Ming-Na Wen, Gina Carano, Nick Nolte, Taika Waititi, Clancy Brown, Amy Sedrais, Bill Burr, Natalia Tena and Horatio Sanz. Each is allowed to create a memorable character that adds color to the world.

Ultimately, this is what makes the show so fresh. For the first time in a long time, we are being shown different corners of the “Star Wars” universe. There is a good deal of that grungy, quirky, rough-around-the-edges feel that we first saw back in the cantina, where Han most definitely shot first.

While it doesn’t feel out of place with the world Lucas first created more than 40 years ago, “The Mandalorian” is also allowed to have its own tone. Notably, the terrific score by Ludwig Göransson pulls its cues from westerns rather than John Williams.

“The Mandalorian” does and doesn’t feel like “Star Wars” in the best ways. Instead of relying on nostalgia and fan service, Favreau puts a focus on characters and story. It acts as an excellent template on how to expand the “Star Wars” universe the right way.