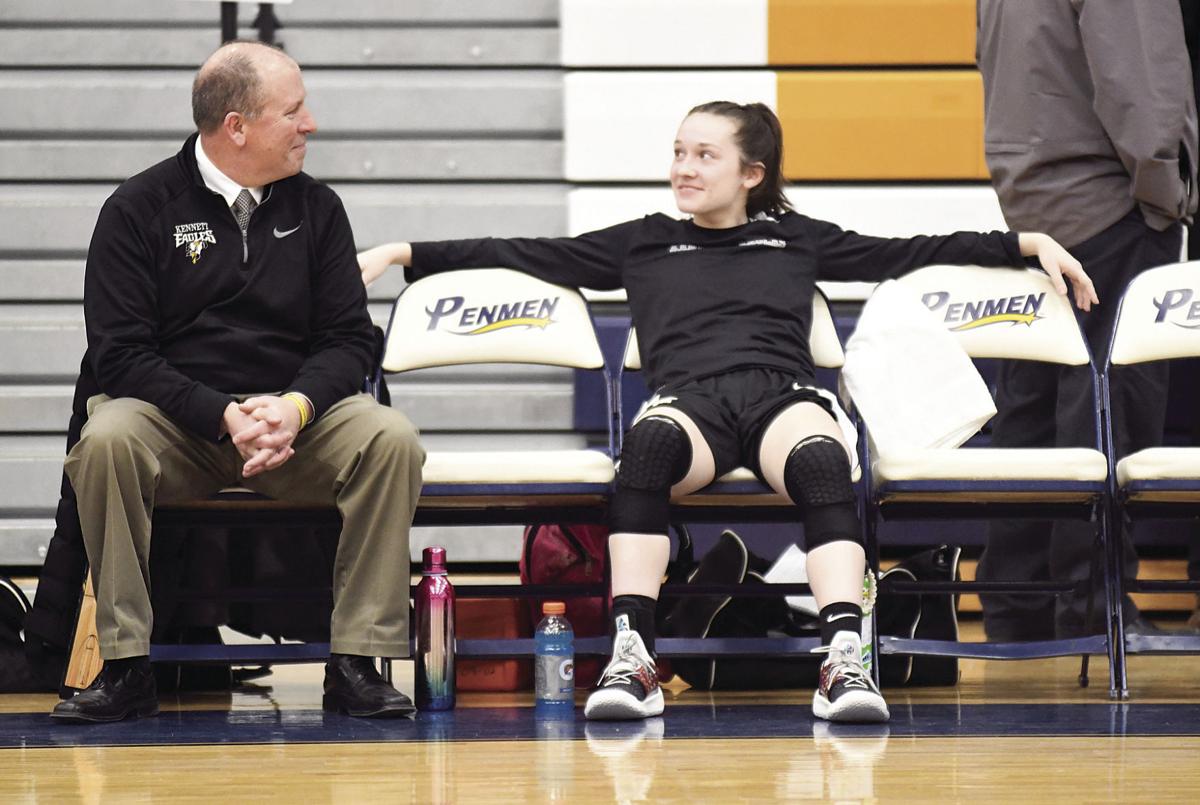 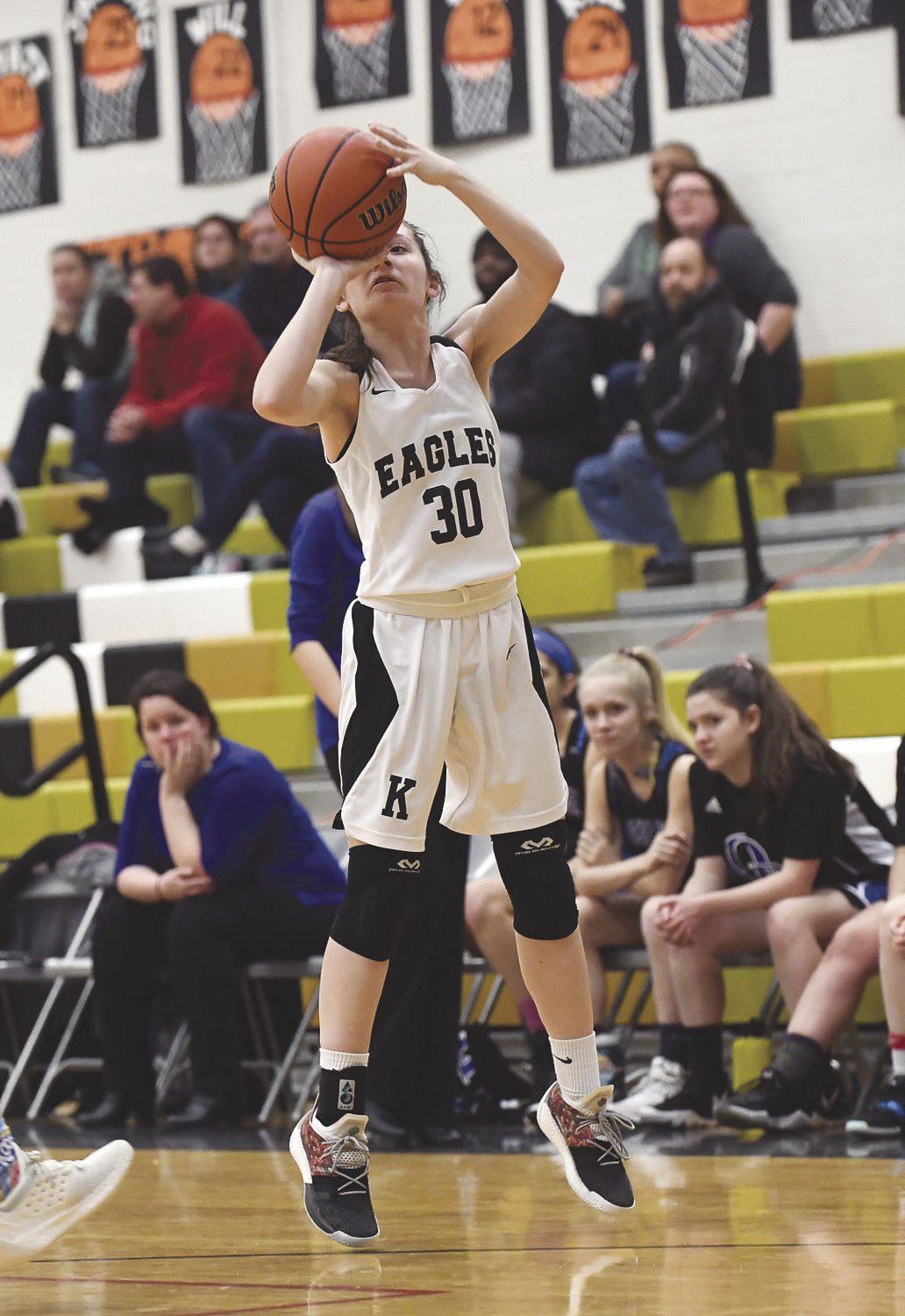 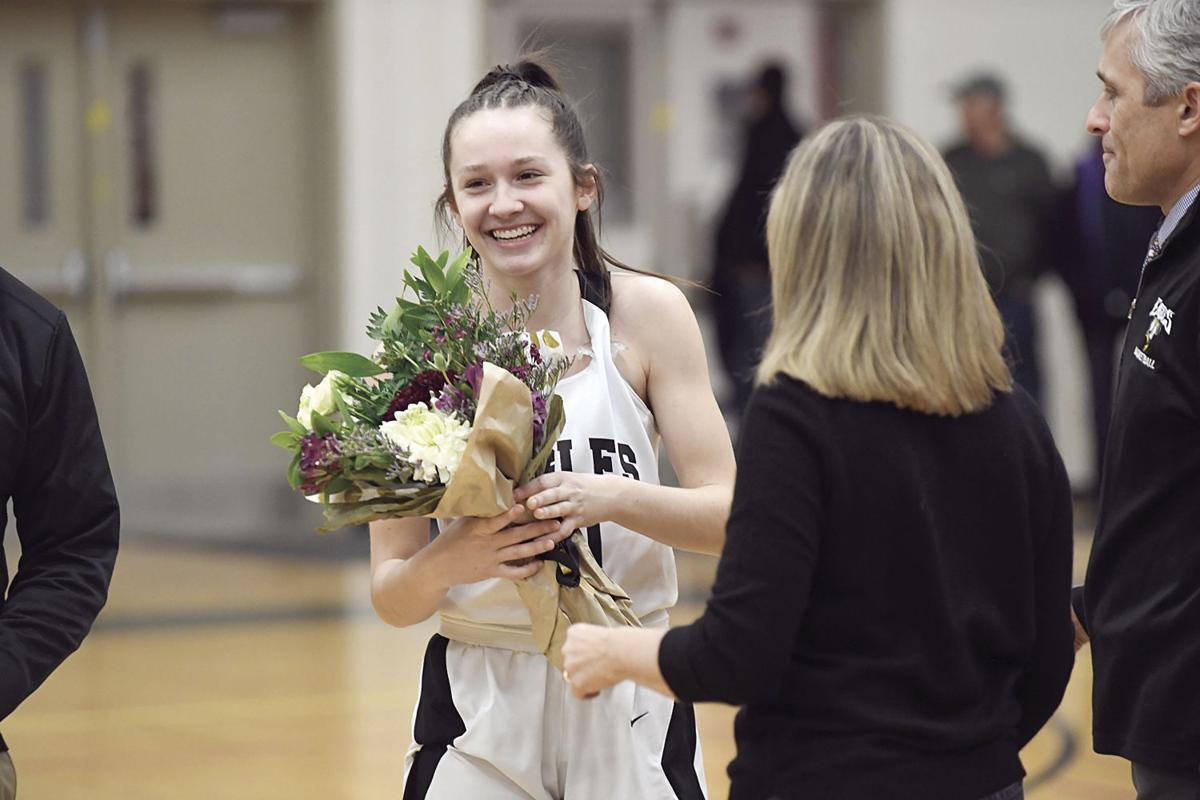 Liz Cote (left) was honored as the lone senior on the Kennett High girls' basketball team prior to the final regular season home game in February. (JAMIE GEMMITI PHOTO)

Liz Cote (left) was honored as the lone senior on the Kennett High girls' basketball team prior to the final regular season home game in February. (JAMIE GEMMITI PHOTO)

(Editor’s note: Kennett High seniors Sylvie Brustin, Santiago Ciro, Liz Cote Eva Drummond, Riley Fletcher, Hannah Frittenburg, Sophie Killeen, Trevor LaRusso, Natalie Shaw and Zach Smith, who all plan to play sports in college, recently took part in a Zoom chat in which they talked about what led to their decisions and they also offer advice to other student-athletes who might aspire to play in college. The Sun will be highlighting these Eagles over the next few weeks.).

Liz Cote was the lone senior on this year’s Kennett High girls’ basketball team. The four-year letter winner cherished the opportunity to guide the young flock, helping the Eagles earn a 14-4 record and the No. 5 seed in the state tournament.

Liz, who led the Eagles in scoring, steals and assists, while finishing second in rebounds, received All-State honors for the second consecutive year. After earning All-State Honorable Mention as junior, Liz was chosen for All-State Second-Team and was regarded as one of the top guards in the Granite State.

While on plenty of college radars, Liz ultimately selected the University of New England, where she looks forward to challenging herself and opponents on the hardwood wearing her customary No. 30 jersey.

• Can you tell us what led you to your college choice?

“I already knew University of New England was a good school academically, with a good rep, and also had a decent campus. After I met Coach Ewing, I really felt a bond between us and it all came down to meeting the team. When I first met the team, it was during a practice of theirs. I knew they were my people about 30 minutes in.”

• When did you know you wanted to play beyond high school?

“For me personally I never not thought about playing beyond high school. It was about 8/9th grade when I started getting serious about the reality of it all.”

• What do you think is going to be the big adjustment for you in terms of moving from high school to collegiate athletics?

“For me it’s going to be different role playing and level of competition. I have always played a big role on all my teams and next year I think it’s for sure going to be different. A lot less playing time and being even more supportive to my teammates who are on the court.”

• Given the current climate with the COVID-19 virus, what are your coaches telling you about college this fall? Will there be soccer and field hockey?

“I have not heard anything.”

• Can you image playing without any spectators?

“Honestly I have mixed emotions about it. Part of me is saying it could be fun and less pressured, but at the same time it would lack purpose when no one is there to support you. I couldn’t imagine not having my family there watching me.”

• If you could have played any other sport at Kennett, what would you have chosen?

“I think I would’ve played lacrosse. I did it for one year but then got busy with drivers ed and AAU.”

• What advice would you give to other Eagles who may want to play a sport in college?

“Join travel teams or meet people that have good connections and gather film to send out to coaches.”

• Do you have a favorite moment in your high school sports careers?

“Winning the final four game against Lebanon and making it to the state championship. It was the most unreal feeling.”

• Can any of you envision one day wanting to coach?

“Honestly I think so. My dad and grandfather have/had been coaching most of their lives so I think it could be fun to consider.”

• What are you missing the most during remote learning?

“Going to school and seeing my friends, talking with Greg, and being productive throughout the day.”