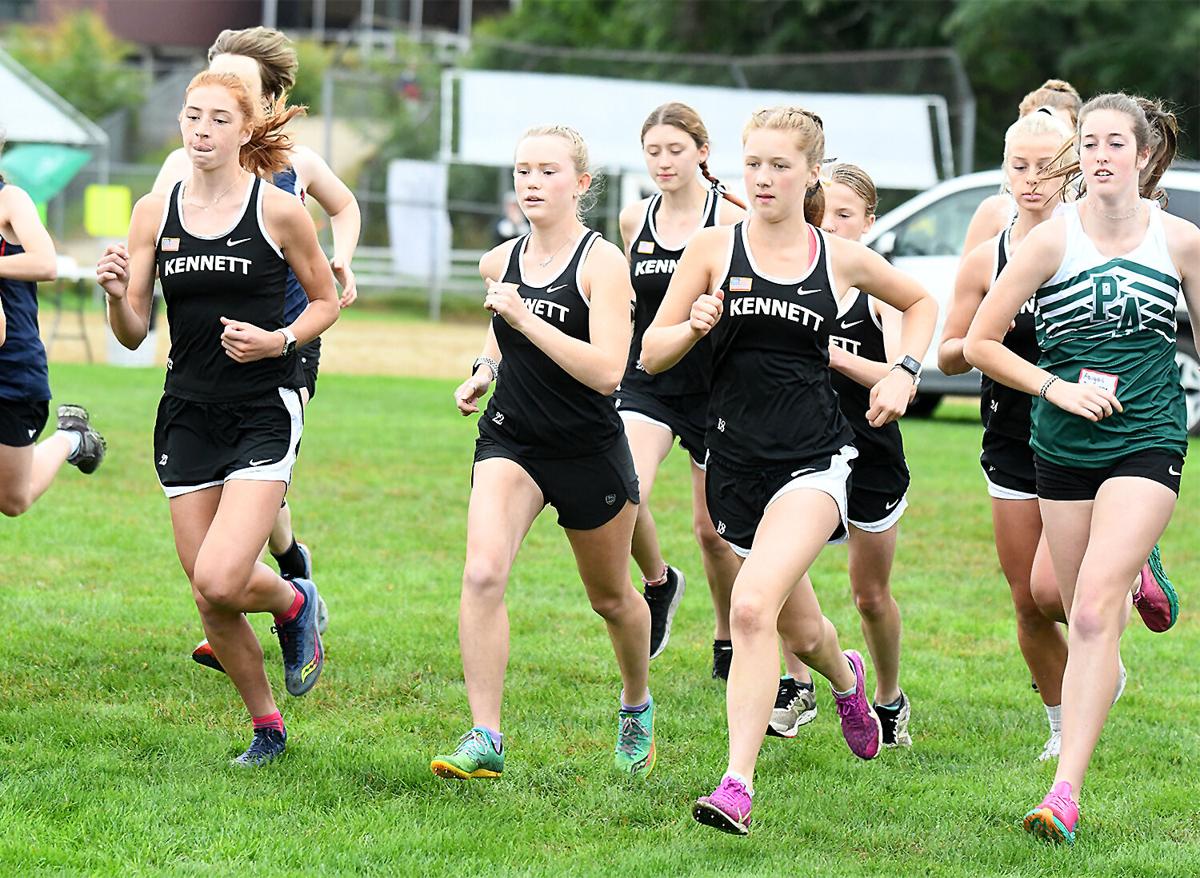 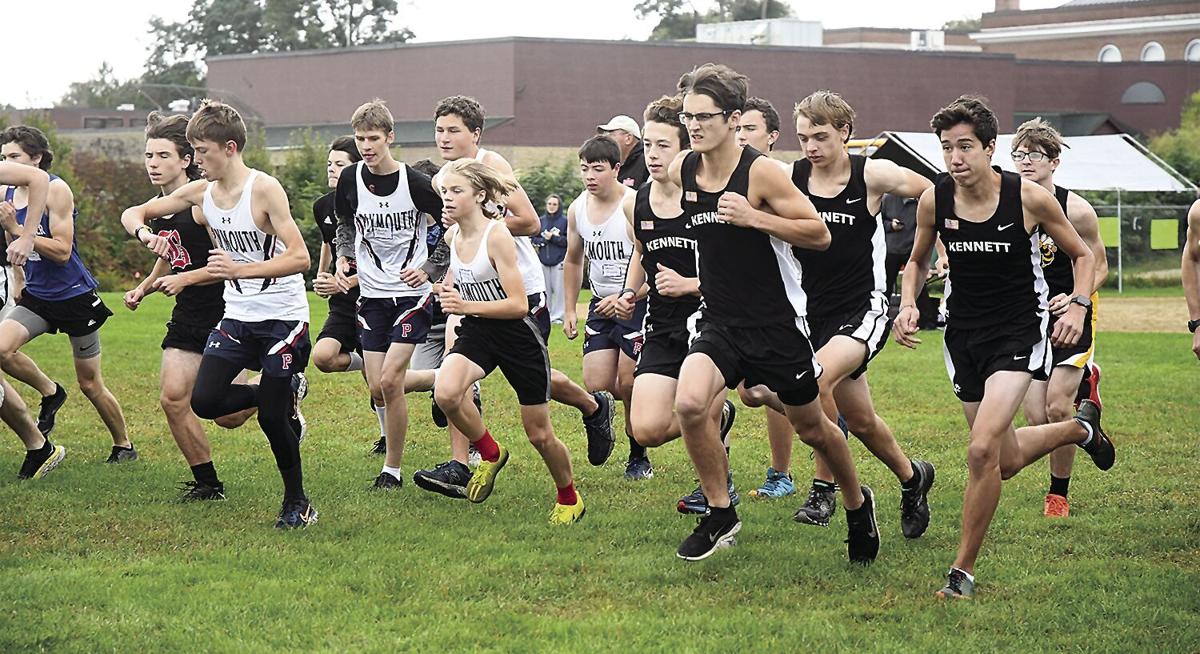 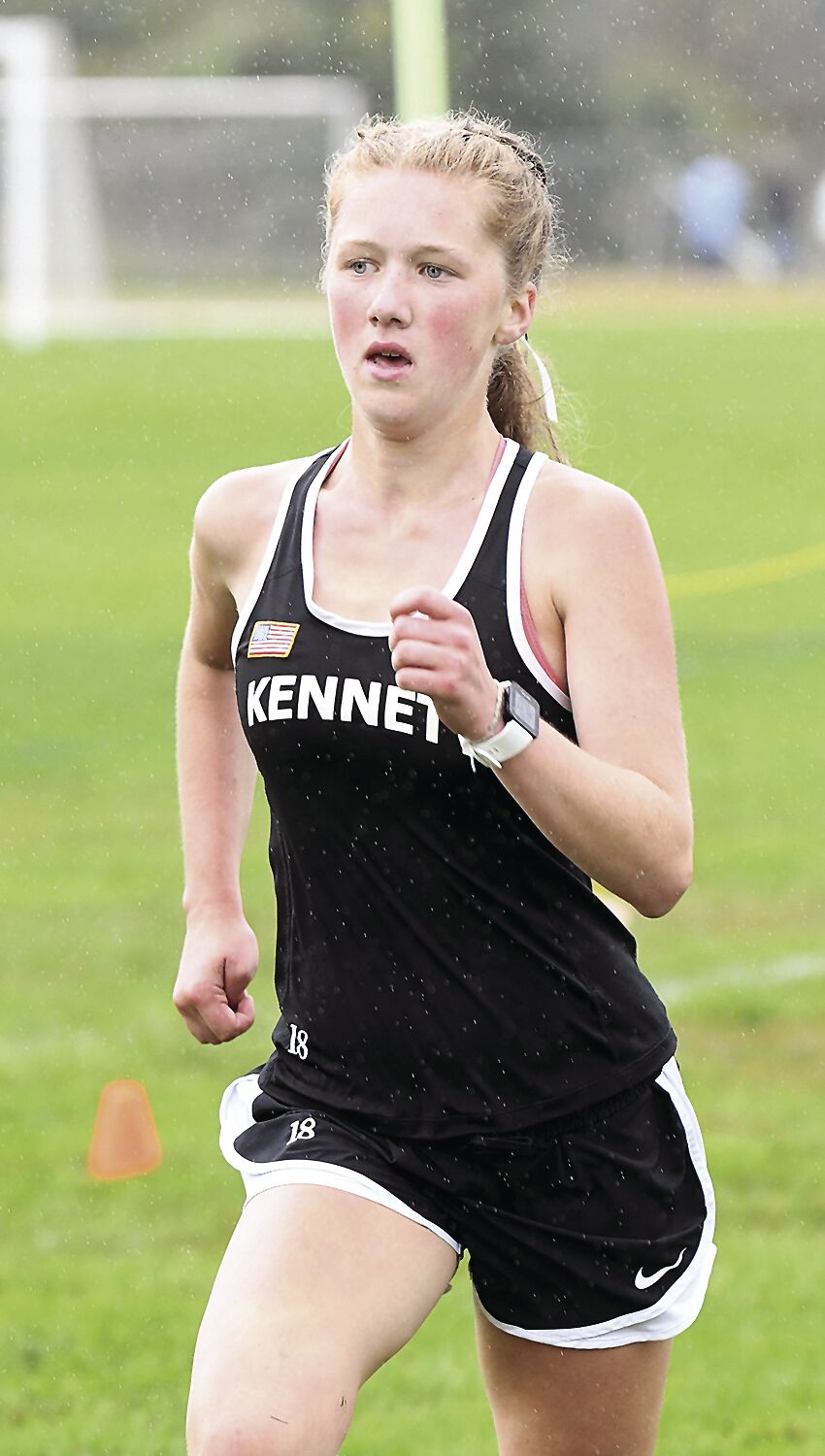 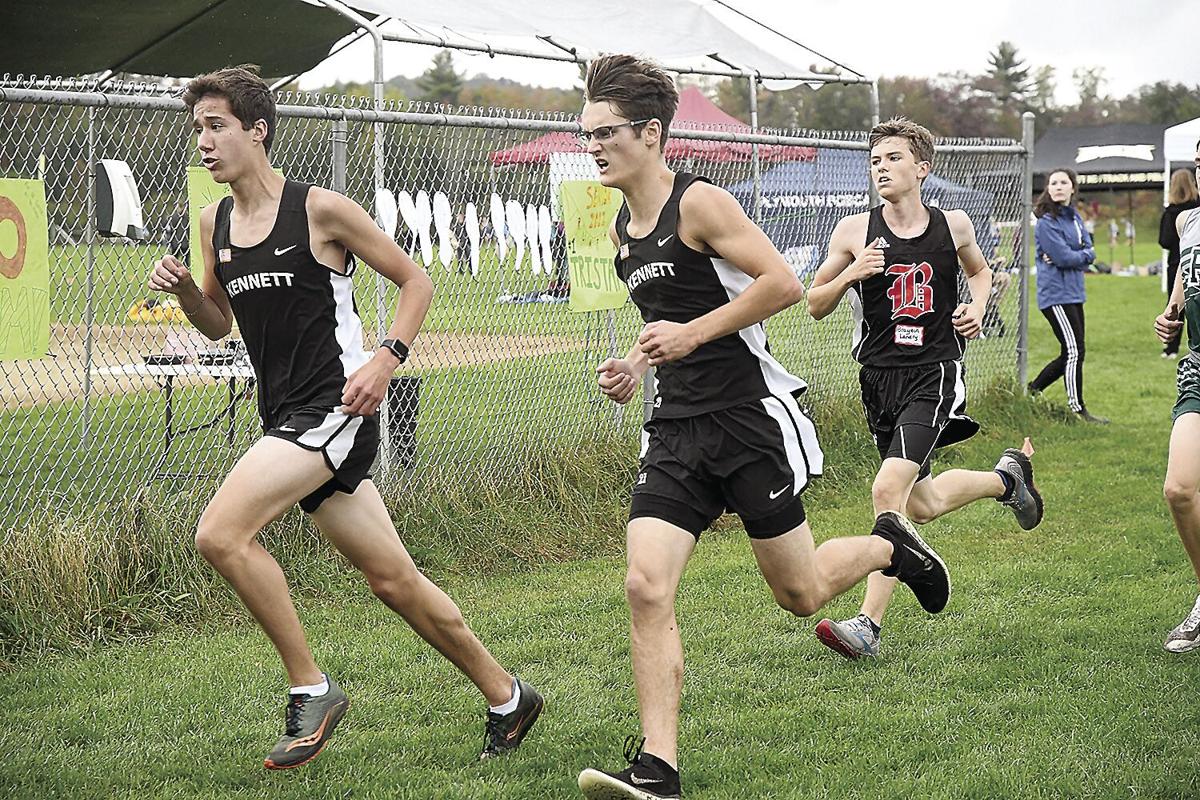 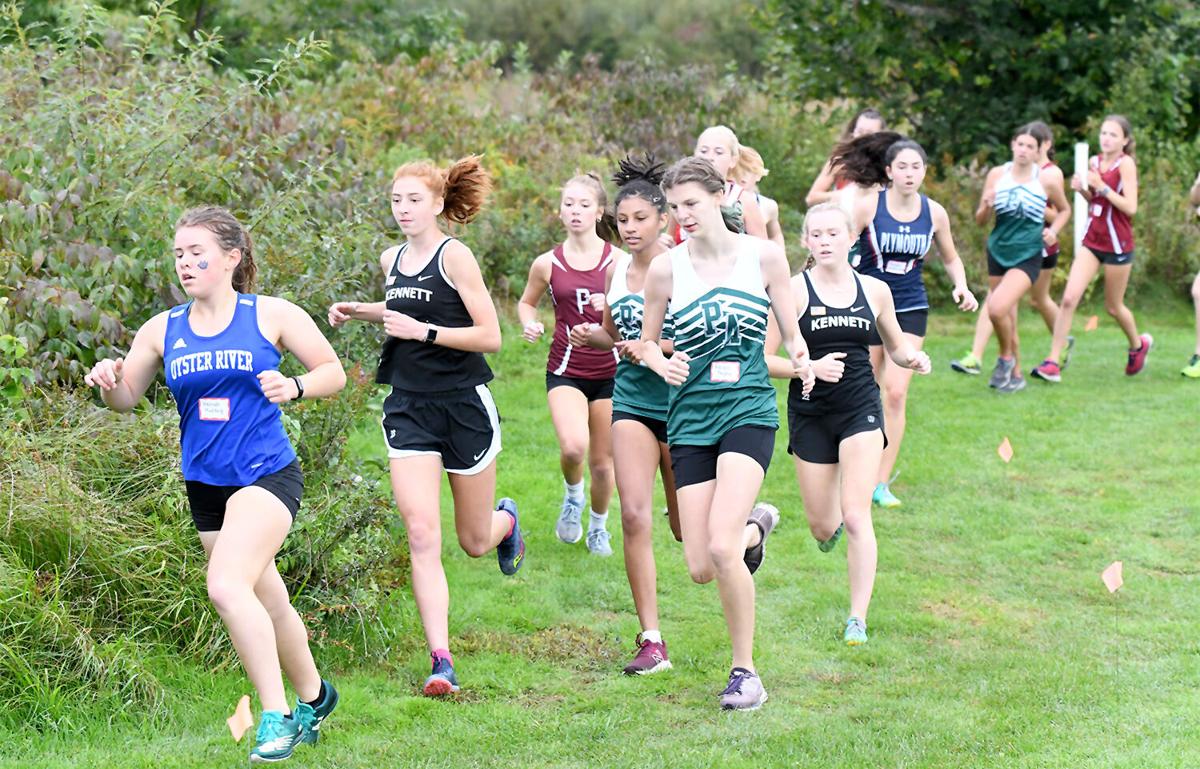 Kennett High freshman Piper Lopashanski (second from left) and senior Grace Perley (right) race with a pack in the first mile of the Saturdays’ Kennett Invitational on the course at the Kennett Middle School. The Eagled finished seventh and eighth, respectively. (LLOYD JONES PHOTO) 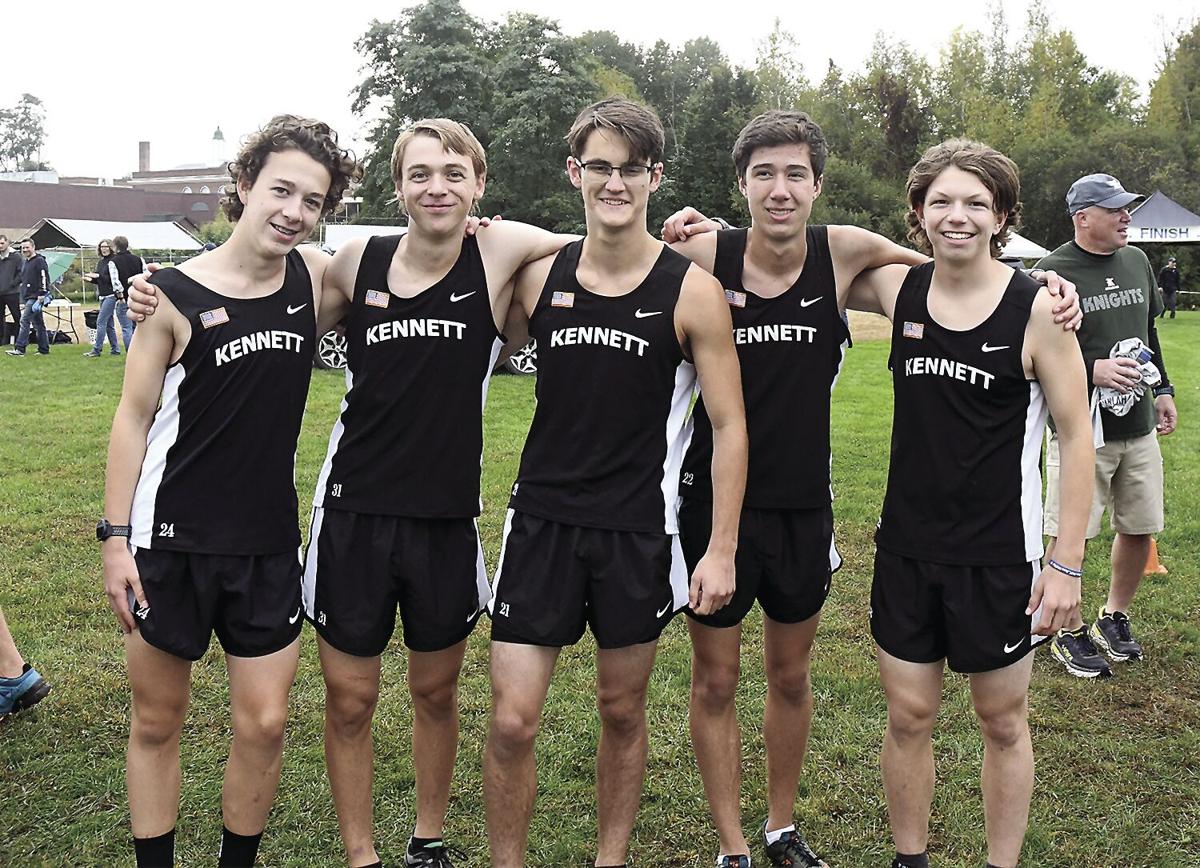 Kennett High freshman Piper Lopashanski (second from left) and senior Grace Perley (right) race with a pack in the first mile of the Saturdays’ Kennett Invitational on the course at the Kennett Middle School. The Eagled finished seventh and eighth, respectively. (LLOYD JONES PHOTO)

CONWAY — There’s no place like home. Members of the Kennett High boys’ and girls’ cross-country teams proved that on Saturday afternoon when every Eagle set either a personal or seasonal best in the team’s lone home meet of the fall at the Kennett Invitational. It was the perfect 78th birthday present for Coach Livingston.

Held at the picturesque Kennett Middle School in a misty rain with the Moat Mountains and Mount Washington as a backdrop, the KHS girls finished second overall out of 10 schools while the boys were third.

“What a great day,” said Livingston. “I couldn’t think of anywhere else I’d want to be on my birthday. I thought the whole day was a huge success. We had great volunteers, terrific spectators and the competition was fantastic.”

He added: “The weather was actually ideal for running. Considering what was expected, we thought there were going to be downpours, we lucked out. Tim (Livingston, middle school cross-country coach) spent five hours setting up the whole course. The middle school staff mowed the day before, everything was ideal.

Oyster River took team honors for the girls with 17 points, followed by Kennett 46; Portsmouth, 73; Pembroke, 132; Plymouth, 134; and Spaulding, 135. Berlin, Kingswood, Pittsburg and White Mountains did not have the necessary five runners finish the race in order to post a team score.

Individually for the girls, Oyster River freshman Mackenzie Cook took first place in the 5K in 19:16. She was joined on the podium by fellow freshman Haley Cavanaugh and junior Erin Carty, who were second and third, respectively, in 19:24 and 19:25.

Senior Amy Burton led Kennett, which placed seven runners in the top 17 in the varsity race. She set a personal best time of 20:15.

For the boys, Oyster River swept the podium with Dillon Labonte winning in 16:34, followed by teammates Henry Hagen, second, 16:58; and Amani Harvey, third, 17:01.

“The Pembroke boys are seeded 10th in Division II and we were able to best them by four points. The goal for the boys is to finish in the top 10 this year,” Livingston said.

“The times were excellent,” said Livingston. “Everyone who ran in Manchester the week before ran seasonal or personal bests. I saw a lotto really good effort. The boys and girls ran tactically sound. It was just such a good race. We had a ton of fans. The amount of support is really appreciated.”

He added: “I don’t think many of them could have run much harder. I’m so proud of the whole team. I couldn’t have asked for a better day with their performances.”

The Eagles now head into the second half of their season with a meet this Friday (4 p.m.) in Plymouth.

“It’s a hilly course, but a good course,” Livingston said. “I think the times will be 20 to 30 seconds slower than what we ran on Saturday. This is the last major race that the whole team will be together.”