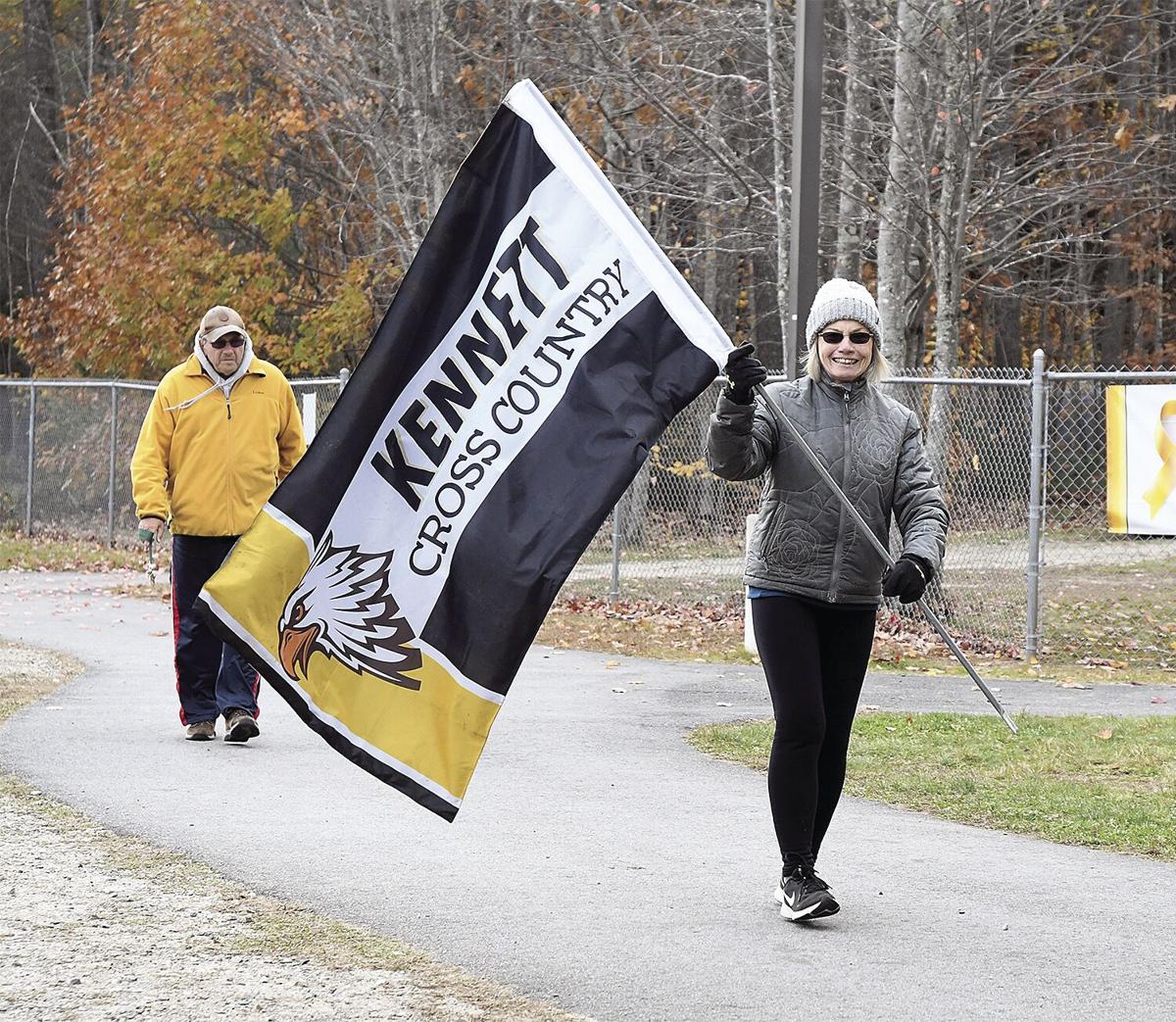 Coaches Eileen and Bernie Livingston are pleased with how the cross-country season went at Kennett High this fall. The girls advanced to the prestigious Meet of Champions, while the boys improved with every meet. (LLOYD JONES PHOTO) 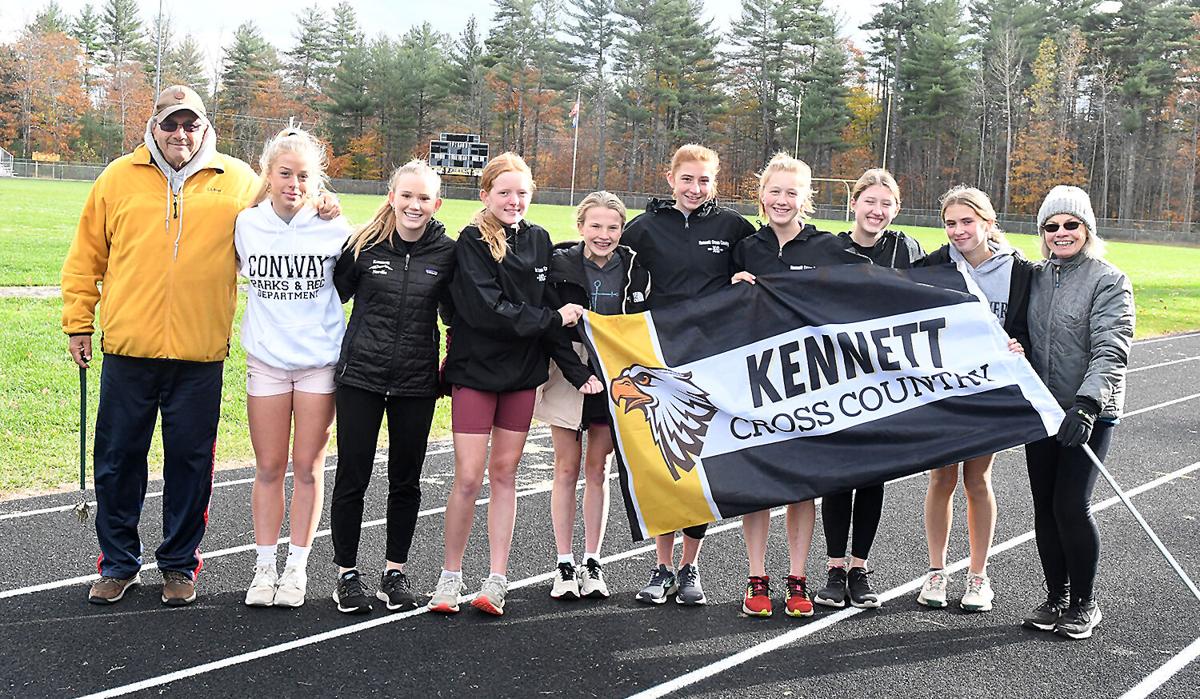 Coaches Eileen and Bernie Livingston are pleased with how the cross-country season went at Kennett High this fall. The girls advanced to the prestigious Meet of Champions, while the boys improved with every meet. (LLOYD JONES PHOTO)

CONWAY — The Kennett High girls’ cross-country team closed the book on the fall sports season for the Eagles with a stellar performance at the prestigious Meet of Champions at Mines Falls Park in Nashua on Saturday. KHS finished 13th as a team while four girls turned in career-best runs on the biggest stage in the Granite State.

The Meet of Champions brings together the top teams from Division I, II and III for one final day — and what a spectacular day — of racing in New Hampshire.

“We had a great day,” said Bernie Livingston, Eagles’ head coach. “The weather was terrific, as close to perfect as it gets. I was actually over-dressed. Of course, it was 27 degrees when we left Kennett (55 degrees at race time Saturday afternoon).”

“There are a couple of little inclines, but it’s a good course,” Livingston said. “I like it. Every team that ran, ran faster than from the divisional meets the week before (at Derryfield Park in Manchester). All seven of our kids ran faster.”

Dover captured team honors on the day for the girls with 107 points with its top five finishers placing in the top 36 of the 148 runner field. Oyster River was second with 123 points, pipping Keene by a point.

Kennett was 13th with 311 points, fishing just a point behind Coe-Brown Northwood Academy for 12th overall.

“Four of our girls ran personal bests and two other ran seasonal best,” said Livingston. “All in all, it was a great race. The competition was fierce, and because of that, our kids ran well. They all did the best that they could do.”

Individually, Portsmouth Christian junior Brianna Malone won the 5K race in 18:03. She ran at a 5:48 per mile pace.

Two seniors joined Malone on the podium in Bishop Guertin’s MaryKate Finn, who was second in 18:11, and Chloe Trudel of Souhegan, who placed third in 18:22.

Kennett was led by junior Kaylee McLellan, who was 63rd overall in 20:22.

Kaylee had the race of her life,” Livingston said. “She set a personal best by over a minute. She started out as our fifth runner at the mile mark, and she just knows her pace so well. I’m so proud of her.”

Freshman Piper Lopashanski was 68th in 20:24. She was the seventh-fastest freshman of the day.

“Piper ran the race of her life, too,” said Livingston. “Chagrin a 6:11 first mile and hung on from there. Unlike Kaylee, Piper likes to run from the front. She ran a brilliant race. To have two girls — Kaylee and Piper — run under 21 minutes is terrific.”

“Amy cut 25 seconds off her time from last week,” Livingston said. “This was her third or fourth fastest time ever. Amy had been really consistent throughout her career.”

“Grace ran the second-fastest time of the season,” said Livingston. “She was just 4 seconds off her time at the Kennett Invitational and 11 seconds off her personal best.

He added: “Grace and Amy gave us terrific senior leadership all season. They’ve had outstanding cross-country careers and are wonderful people, too.”

“It was another PR for Molly,” Livingston said. “She has done nothing but improve all season. Molly took 45 seconds off her personal best time.”

“Ella set a PR, and improved considerably from last week,” said Livingston. “She was actually 5 seconds faster than she ran at the Kennett Invitational.”

For the second week in a row, the Eagles had to do a little pre-race lineup juggling after junior McKayla Dockham took ill the morning of the race. Sophomore Rylie Walker, who was listed as an alternate with freshman Stephanie Kendzierski, stepped in to race in her absence. The week before, Dockham ran for Walker, who was sidelined due to sickness.

“McKayla came to the meet but was unable to go,” Livingston said. “It was really tough for Rylie to step in at the last minute to be told you’re going to run. She and Stephanie have been terrific alternates.”

“Rylie ran the second-fastest race of her life,” said Livingston said. “She was 17 seconds faster than she ran (in the Junior Varsity Championships) at Coe-Brown. I can’t say enough about Stephanie and Rylie. They were ready every day.”

For the boys, Bishop Guertin edged Coe-Brown for the team title. Both schools tied at 75 points after their top five runners crossed the finish line. The title was decided on the sixth runner. BG’s sixth runner finished 40th, while Coe-Brown’s was 51st.

Keene senior Torin Kindopp was second in 15:25, while Patrick Gandini of Gilford rounded out the podium in third in 15:27.

The Meet of Champions wrapped up 12 weeks of cross-country and 55 practices and meets for the Eagles.

“This was such a nice way to end the season,” Livingston said. “The girls went to Nashua to compete as opposed to just going to have fun. I was just so happy with how they all competed.”

He added: “I’m kind of ambivalent about the season being over. On one hand, you say you’re glad it’s over because 12 weeks is a long time, but on the other hand, this is such a special group, you’d like to continue a little bit longer.”