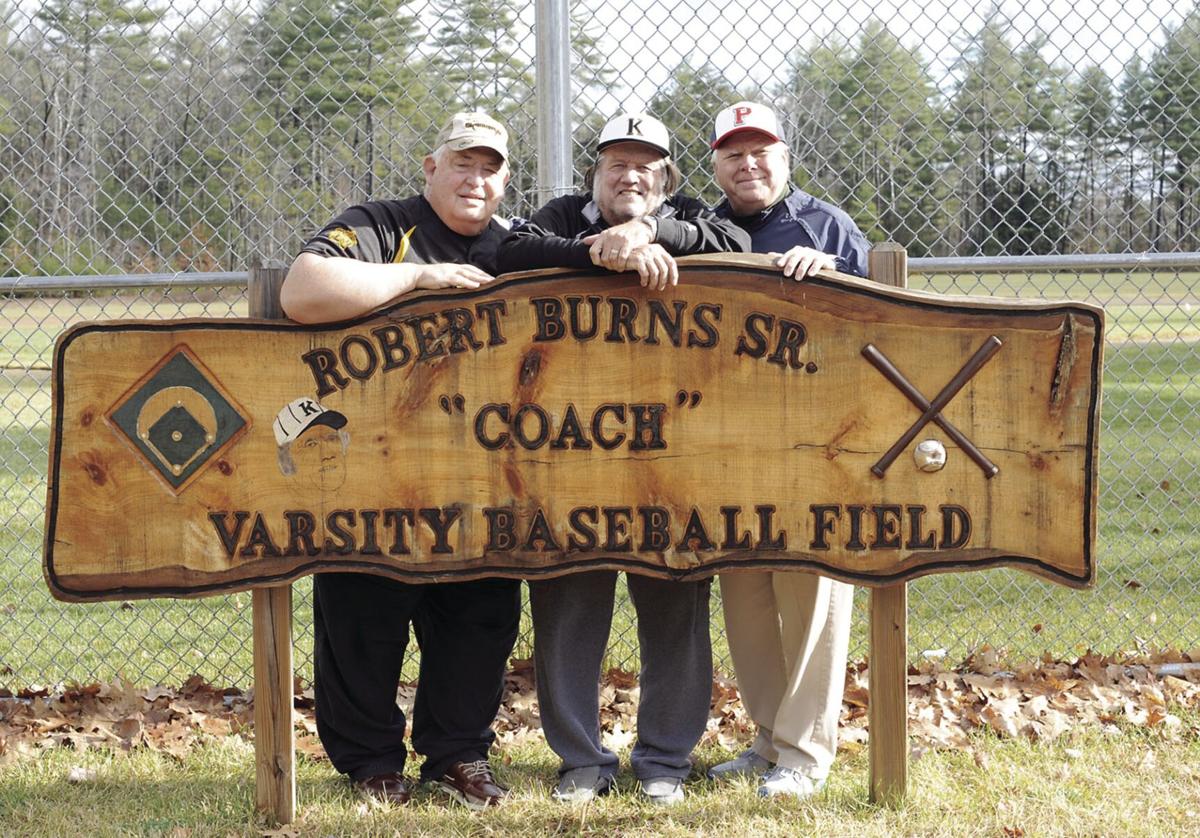 There were a lot baseball stories swapped in the fall of 2016 when Bill Dod, the late Bob Burns and Tom Underwood got together in Conway for a visit. The trio are the career win leaders in New Hampshire high school baseball. (JAMIE GEMMITI PHOTO) 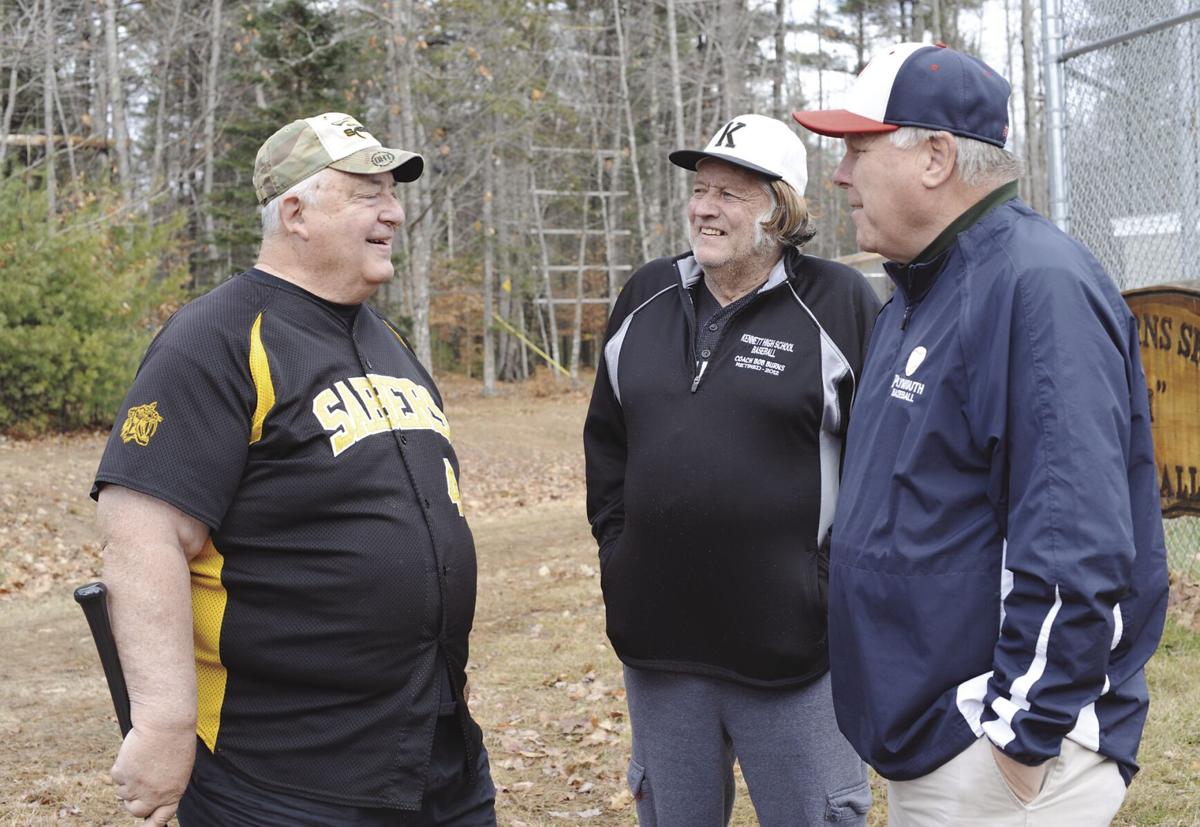 There were a lot baseball stories swapped in the fall of 2016 when Bill Dod, the late Bob Burns and Tom Underwood got together in Conway for a visit. The trio are the career win leaders in New Hampshire high school baseball. (JAMIE GEMMITI PHOTO)

CONWAY — Baseball royalty will be honored by the Baseball Coaches Association of New Hampshire, which has announced its first class of inductees into a hall of fame. Among those selected for enshrinement is the late Bob Burns, who coached Kennett High baseball for 42 years.

Joining Burns in the first class are is good friends Tom Underwood, Bill Dod and John Cummings along with Warren Doane.

“That’s quite a crew,” Linda Burns, his wife of almost 38 years until his passing in January of 2016, said. “It’s a huge honor. I know Bob would be proud, and his former players will be happy to see this take place.”

The Baseball Coaches Association had planned to hold an enshrinement banquet in June, but it was postponed due to the COVID-19 pandemic to sometime in October in Manchester.

“We will continue to work with Sweeney Post for our venue,” an April 17 post on the BCANH website states. “The fact is we don’t have a lot of answers to the questions that need them, please understand that! When we have a date set then we will announce it immediately!”

Burns, who retired at the end of the 2002 season after 42 years at Kennett High, left the diamond as the then all-time leader in New Hampshire high school baseball victories. Burns became head coach of the varsity baseball team in 1970, and to many, that's when baseball arrived in Mount Washington Valley. The Eagles quickly became one of the best programs in the state. His teams went 511-312. Aside from being perennially in the post-season, the Eagles won two state championships in the Burns era and reached the Final Four eight times.

"He is the history of this program," current KHS varsity baseball coach Josh McAllister, who played for “Burnsy,” as he was affectionately known, said in 2015 when had Burns throw out the ceremonial first pitch at Robert Burns Sr. Varsity Baseball Field at Kennett High School which was unveiled in 2014. "I know I wouldn't be here if it wasn't for him. He is Kennett baseball."

In 1994, Burns was inducted into the Coaches Hall of Fame. In 2009, he received the Walter A. Smith Award from the state Interscholastic Athletic Association and was recognized as one of the winningest baseball coaches in New Hampshire. In 2016, he sat third behind his good friends Tom Underwood, who retired from Plymouth in 2015, and Bill Dodd, who was still at the helm of the Souhegan program. The three were able to get together in the fall of 2015 for a day of baseball storytelling, something Burns loved to do.

Underwood was humbled by his selection.

“Being a member of the first class of the Hall of Fame means the world to me for many reasons,” he said. “First to be with my closest friends and fellow coaches Bob Burns and Bill Dod. Over the years we had many games during the regular seasons which spanned over 40-plus years.

“The three of us grew to respect each other in more ways of life. It also rewards the big three for all of the time that we spent in developing young players to become men in all aspects of life to better serve their communities. It doesn’t get any better than this to become part of the greatest sport of baseball.”

Underwood, 69, and a resident of Campton, coached the Plymouth Bobcats for 43 years (1972 to 2015), compiled a resume second to none — going 518-256, winning six state championships, earning seven state runner-up trophies and was a regional force in local youth baseball including Babe Ruth and the American Legion programs.

Dod, 73, of Amherst, coached high school baseball for 50 years before retiring from Souhegan High School in 2018 with 549 wins. He also coached at Bishop Guertin, Sanbornton and Milford during his illustrious career and was also a longtime athletic director for the Sabers.

On May 16, 2016, Dob surpassed his good friend Underwood with his 519th victory. He said the milestone will probably mean more to him down the road, because, “right now we’re in the middle of a great season with a great group of kids, and we have aspirations to have a successful spring.”

He added: “There’s nothing like baseball. It’s a sport that no matter how big or how small or how fast or slow you are, it’s a great game.”

Cummings, 82, and a resident of Somersworth, guided the Somersworth Hilltoppers for 40 years (1961 to 2000), winning three championships and 445 games, the most in New Hampshire at the time of his retirement. He’s now fourth. Cummings taught math at Somersworth.

Doane, who died in 2001, had just one losing season in 29 years as the varsity baseball coach at Concord High School; 15 with American Legion Post 21 and four with the Granite State Big Blue Senior Babe Ruth All-Stars. The Warren H. Doane Diamond at Memorial Field in Concord is named in his honor.

According to the BCANH website, “the length of service shall be a minimum of 10 years of head coach high school baseball coaching. All years are as a head coach.

Ten to 20 years of high school baseball coaching means that the nominee must be retired for a minimum of two years.

Over 20 years of coaching high school baseball means that the nominee must be retired for a minimum of one year.

Over 25 years is automatically eligible.

The committee also established selection criteria: “1. Impact on New Hampshire baseball. 2. Character. 3. Accomplishments in coaching. 4. Class size: With the exception of the first class, there will be a maximum size set at five inductees total per year.”

The procedure for nominations is they can be filled out online or emailed to bcanhinfo@gmail.com.

Nominations may also come directly from the hall of fame committee. The committee features two representatives for each division. The president of the BCANH will only vote in the case of a tie. Committee memberships will rotate at a staggered pace (for example the first committee will have half the division reps on for one year and half on for two years to set up consistency).

“The deadline for nomination is Aug. 1 of every year. Each recipient shall be notified via letter from the president (or his assignee.) This letter shall contain the date and location of the banquet, along with a biography form that is to be returned to the sender by the second Saturday in October.”