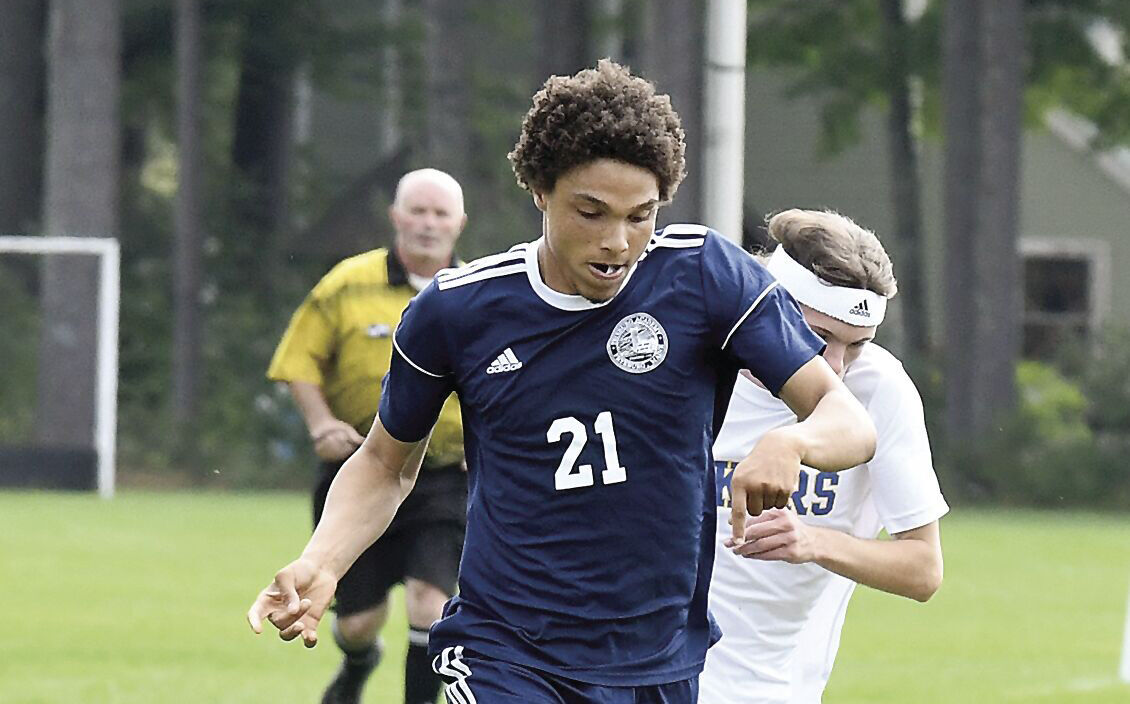 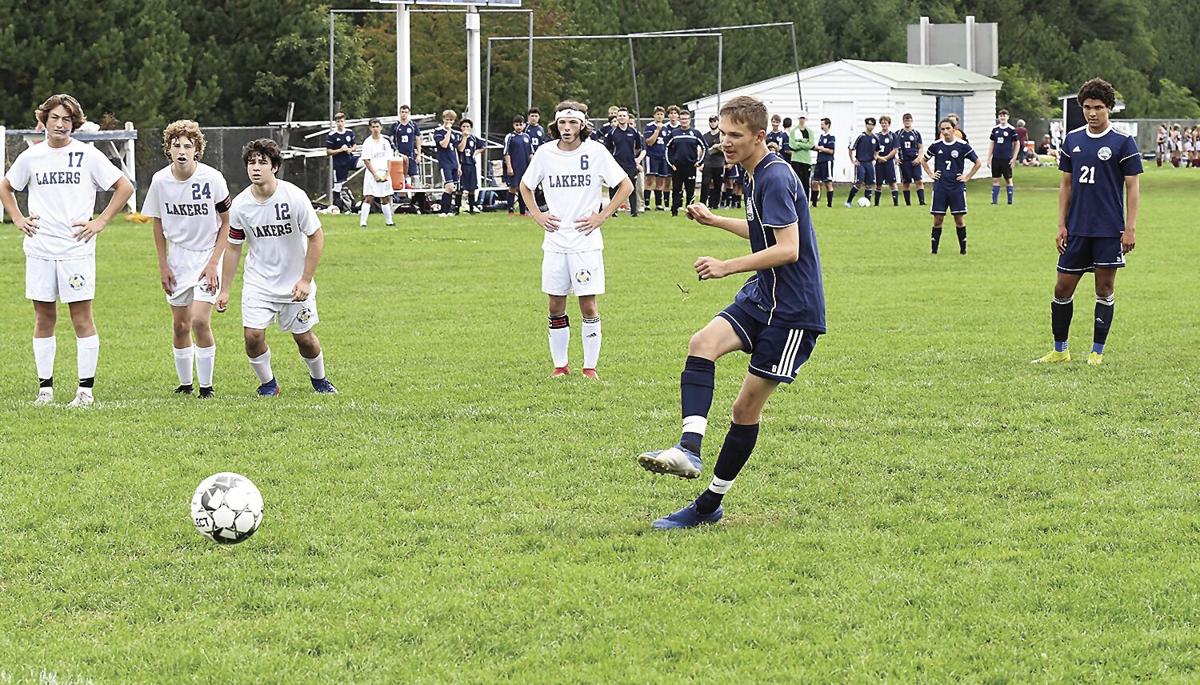 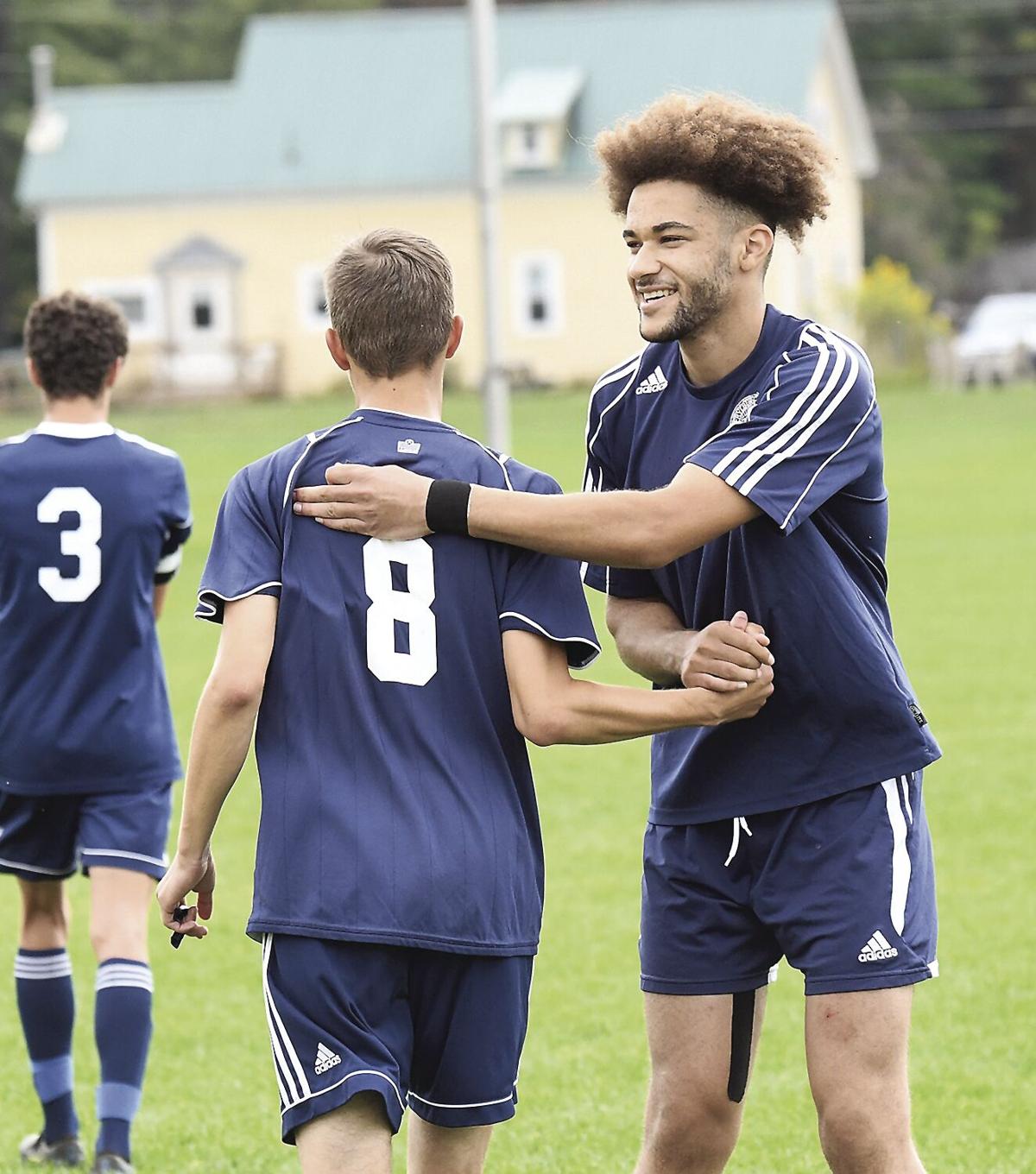 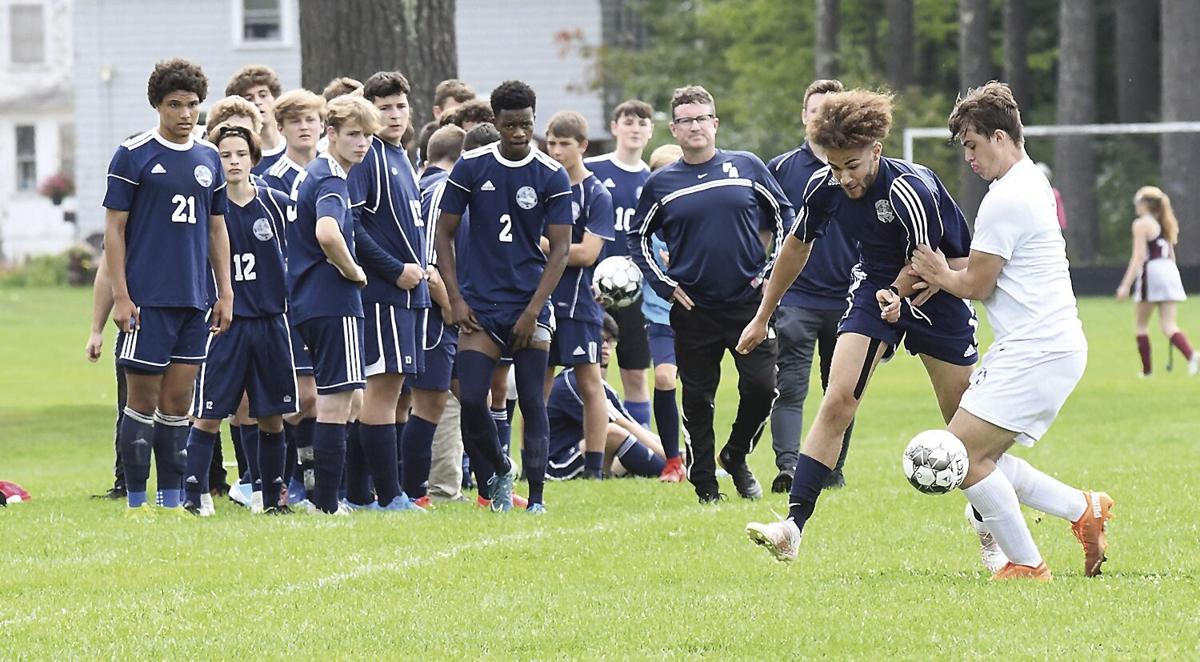 Forward Lenny Foe-Essissia is grabbed onto by a Lake Region defender during first half action on Saturday. (LLOYD JONES PHOTO)

Forward Lenny Foe-Essissia is grabbed onto by a Lake Region defender during first half action on Saturday. (LLOYD JONES PHOTO)

FRYEBURG — Fryeburg Academy striker Jacob Adams scored literally on his first touch and definitely on his final touch to give the Raiders a thrilling 4-3 overtime home-opening victory in the local derby against rival Lake Region on Saturday.

In a physical contest that saw the Raiders play shorthanded with just 10 men for more than 70 minutes, the hosts were far and away the more talented of the sides and fully deserved to win on Adams’ golden goal with three minutes left in the second overtime period.

“Being down a man for as long as we were can be tough against anyone,” Coach Bob Hodgman-Burns said. “Credit to the boys for keeping the pressure on and never quitting.”

He added: “This was a deserving win. A win is a win, and if we had tied it, it would have in effect been almost like a loss. This was a match we had to win.”

The victory lifted Fryeburg to 2-1-1 on the young season.

Saturday’s match, which had been pushed back two weeks due to the Lakers dealing with COVID-19 to begin the school year, was packed with action and plenty of fireworks. Hodgman-Burns reminded his side of the importance of getting a result against its rival.

“This is the match we’ve been waiting for,” H-B told the Raiders seconds before kickoff. “I want a fast start. We need to put one in the net in the first 10 minutes.”

Fryeburg did exactly that, only much faster. The Raiders took the opening kickoff, dropped it back to midfielder Tim Eulenberger, who lofted a pass down the right flank which Adams, a junior, ran onto, beat a defender and slotted the ball deftly past the Lake Region keeper into the far side of the net just 13 seconds into the match.

“That’s a designed play where we get the ball out to Jacob, who is so quick,” Hodgman-Burns said. “It was a nice way to start.”

The Raiders doubled their advantage just 2:05 later when sophomore Matteo Sbuell was brought down in the penalty area leading to a penalty kick. Eulenberger made no mistake from spot tucking the ball in the lower left-hand corner of the net on a strike no goalie could have saved.

Up 2-0, it looked like the rout might be on, but the Lakers managed to hang on and were given a huge break in the ninth minute. Sophomore goalie Geri Daiu, from Austria, came off is goal line and took out a Lake Region forward, earning a red card and giving the visitors a penalty kick.

“That was the easiest red car you are ever going to see,” Hodgman-Burns told his players on the sideline, adding, “We’ve got to play smarter than that.”

Senior goalie Liam Friberg, who was injured at Gray, came on to face the penalty shot, which was fired well wide left out of play.

Playing with 10 men, the Raiders still carried the play and were unlucky not to draw a second penalty kick when Eulenberger was brought down in the box midway through the first half, but the whistle was never blown. FA had another solid change when JoJo Jensen broke down the left wing, cut inside and unleashed a blast that went just wide of the far post.

With 19 minutes left in the half, Sbuell drew a diving save from his shot from 19 yards out.

Lake Region cut into the FA lead when it was awarded a second penalty kick in the half after a Raider pushed a player in the back. Friberg made an initial fantastic save on the shot by Jacob Chadbourne but the rebound fell to Chadbourne, who cashed in this time.

Up 2-1 at the break, Fryeburg regained its two-goal cushion when Adams netted his second goal of the day.

Lake Region cut the lead to 3-2 when it scored on its third penalty kick of the match and drew level at 3-3 with 1:40 left in regulation time.

“I don’t think I’ve ever seen four PKs in a match,” H-B said. “We can’t as a team be giving our opponents three penalty kicks in a match and expect to win — that doesn’t happen very often.”

Heading into the two 10-minute overtime periods, Hodgman-Burns, team manager Zechariah Hoeft and James Littlefield did all they could to fire up the boys in blue and white.

Adams sealed the win and his hat trick late in the second overtime period when he scored the golden goal, giving the Raiders the win and the opportunity to ring the Academy’s victory bell.

“Jacob was definitely the man of the match,” Hodgman-Burns said. “Any time you put three in, including the match-winner, you deserve it. He just barreled that last shot in.”

Eulenberger converted from the penalty spot for one of the FA goals while Adams, Rafael Ajimura and Bernart Barraom also found the back of the net in the win.

“Thursday’s match was really never in doubt,” said Hodgman-Burns. “We did give up another PK. We’ll be working on defending in the box at practice on Monday.”

H-B did a masterful job of getting 31 players into the match.

Fryeburg is scheduled to travel to Freeport (3-2) this Tuesday under the lights at 6 p.m., and close out the week on Friday at 4 p.m. host perennial power Yarmouth (6-0).

Yarmouth has outscored its opponents 21-2, including a 5-0 victory at home over Poland (0-6) on Saturday.

“It’s a big week for us,” Hodgman-Burns said. “Freeport is a good club and Yarmouth is the gold standard in Western Maine. It will be interesting to see how we match up with them. Hopefully, we play well and can tighten up our defense. I think the boys are starting to get a feel for what we’re trying to do.”