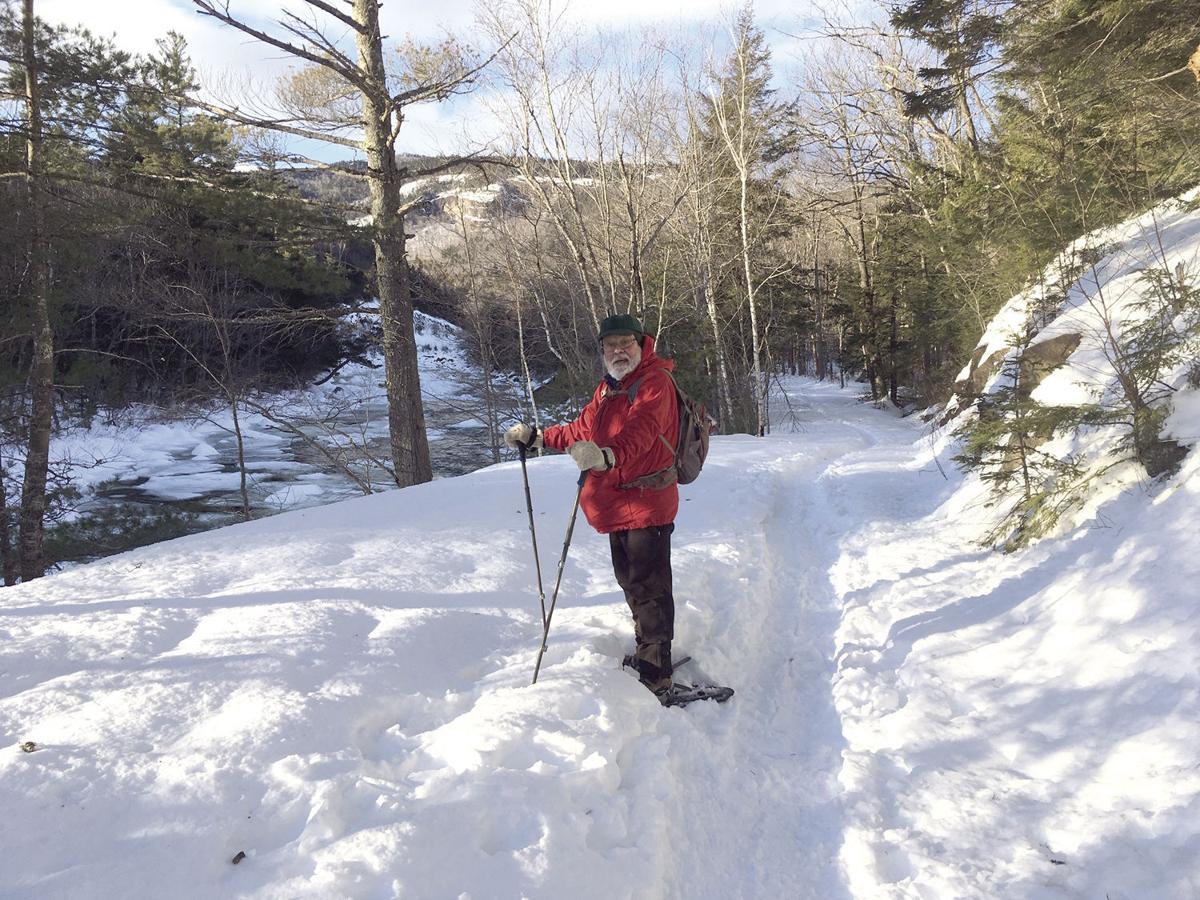 Jan. 15 was a beautiful day to snowshoe the Nana with views of the Swift River and sunlit mountains in the background. (COURTESY PHOTO) 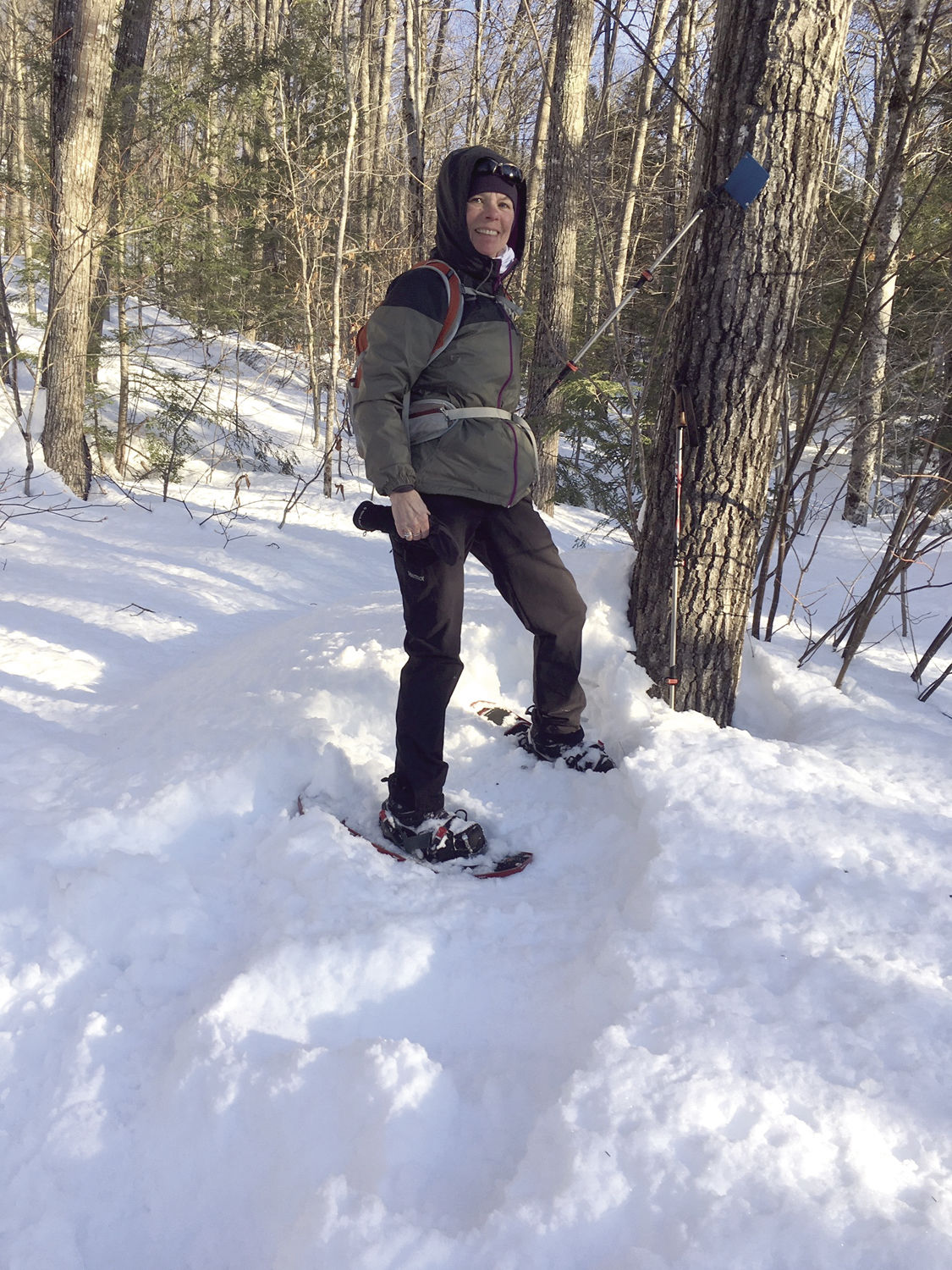 While snowshoeing or skiing up the Nana on Deer Brook Road, look for blue diamonds marking the skis trails off the road. (COURTESY PHOTO) 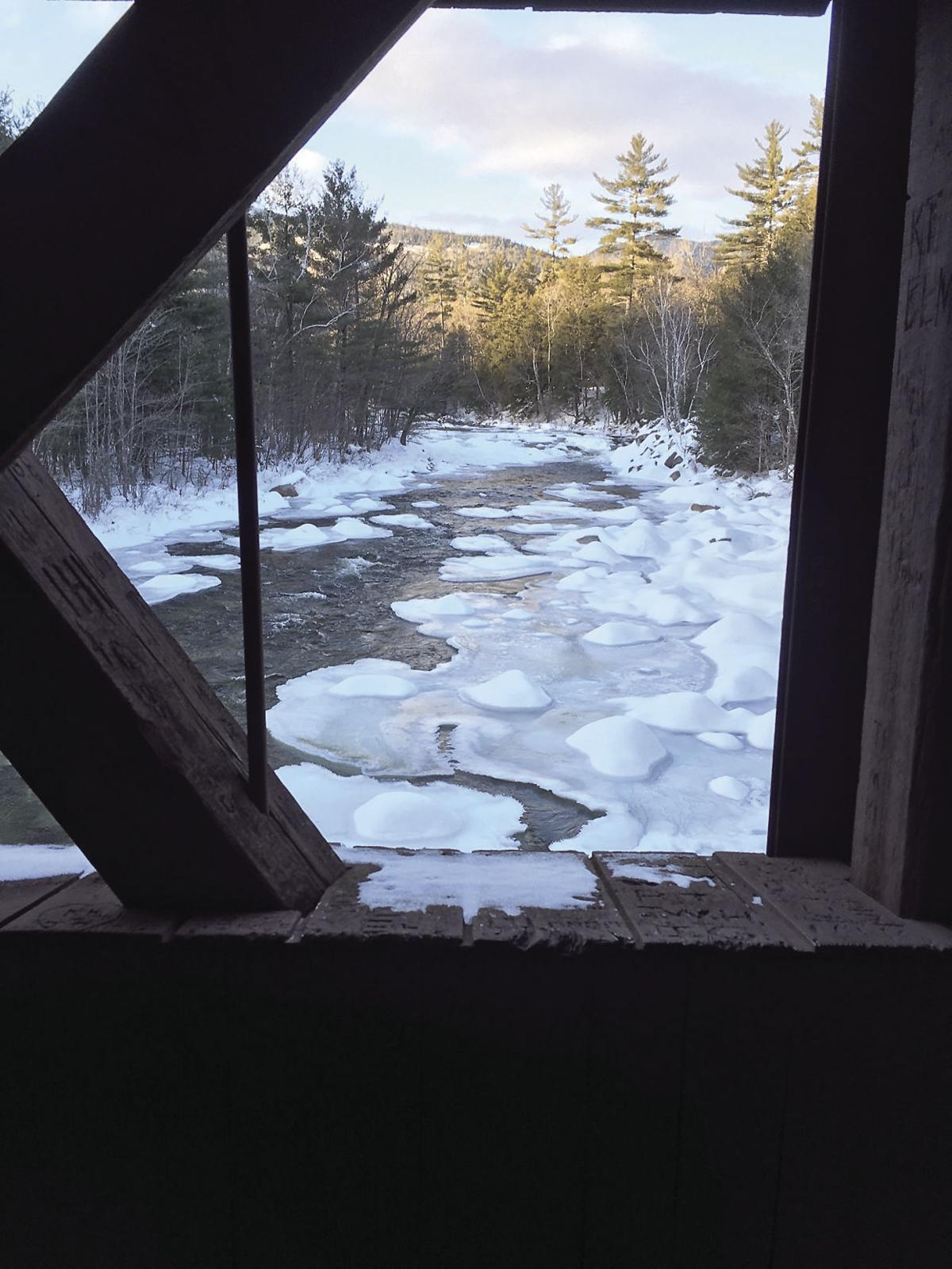 The trusses of the Albany Covered Bridge frame this wintry view of the Swift River. (COURTESY PHOTO) 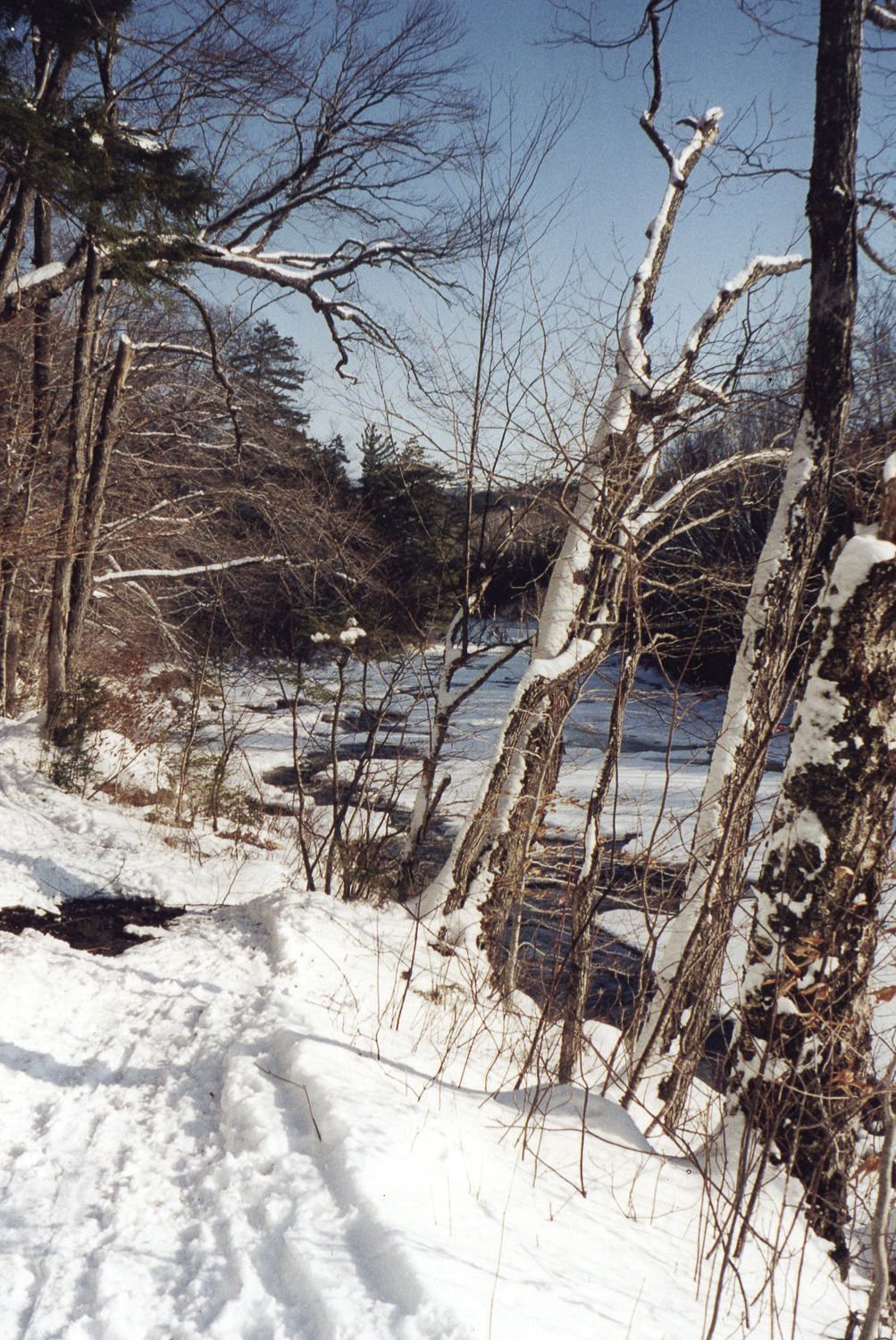 In the 90s, the Lower Nanamocomuck Ski Trail went precariously close to the river bank. The section shown here is probably the one washed out by Irene, and later re-routed. (COURTESY PHOTO) 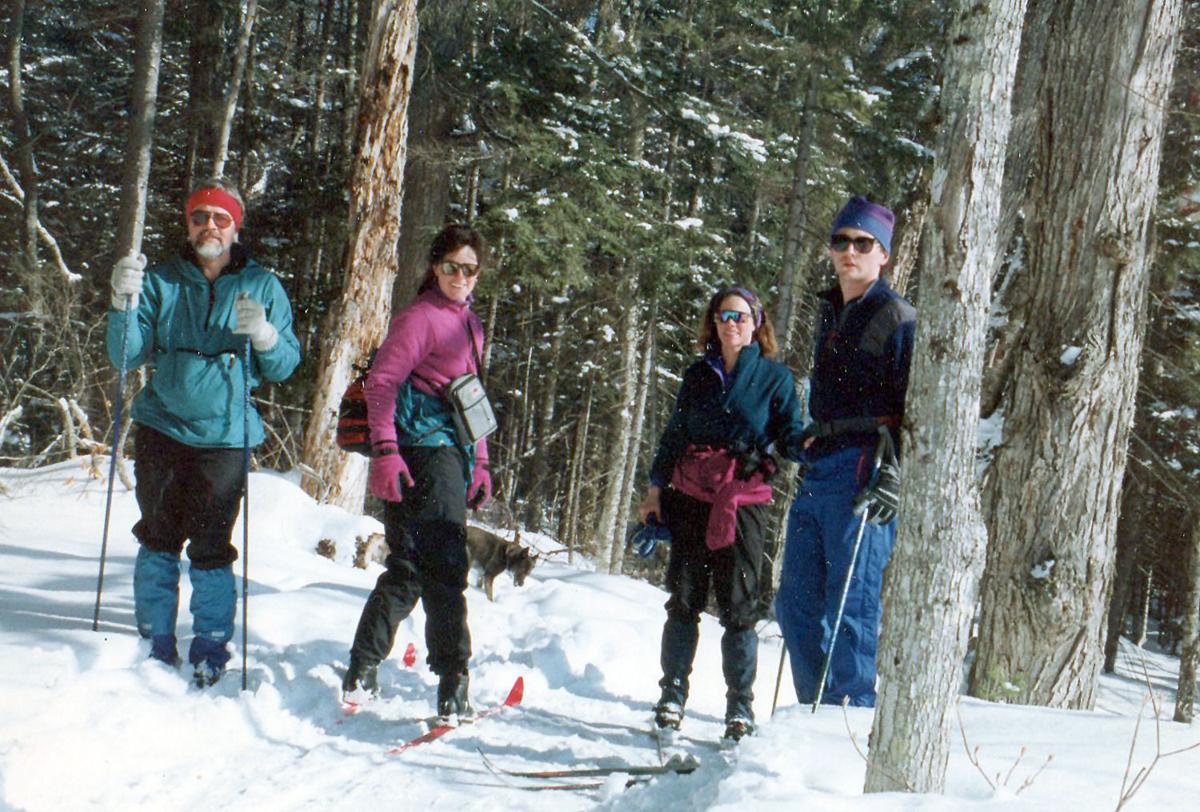 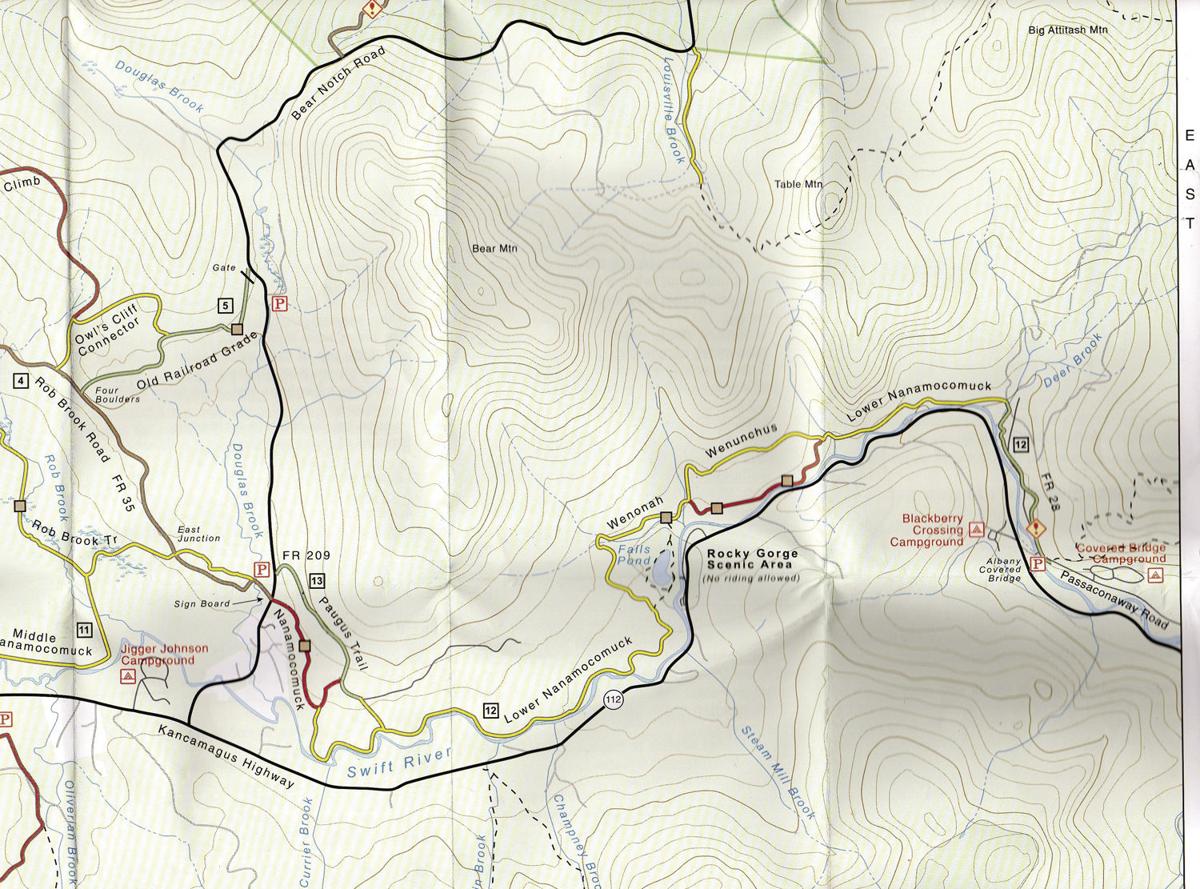 Jan. 15 was a beautiful day to snowshoe the Nana with views of the Swift River and sunlit mountains in the background. (COURTESY PHOTO)

While snowshoeing or skiing up the Nana on Deer Brook Road, look for blue diamonds marking the skis trails off the road. (COURTESY PHOTO)

The trusses of the Albany Covered Bridge frame this wintry view of the Swift River. (COURTESY PHOTO)

In the 90s, the Lower Nanamocomuck Ski Trail went precariously close to the river bank. The section shown here is probably the one washed out by Irene, and later re-routed. (COURTESY PHOTO)

Thought I’d make it through this winter without getting sick, but I was wrong. Too little sleep and too much activity left my body vulnerable for catching something. It did — a cold. From past experience with winter colds, I knew what I had to do — drink lots of liquids (hot toddies are my favorite), get tons of sleep and ease off on exercise.

Plans to go recreational skiing were shelved. But, I needed a subject for this week’s article. It’s hard to write about skiing when you’re home in bed.

Peter came up with a plan. He suggested we throw our snowshoes and backcountry skis in the car and check out the Lower Nanamocomuck Ski Trail. We were curious about whether the Albany Covered Bridge parking lot on the Kancamagus had been plowed out. With the government shutdown still going on, we thought parking lot clearing might not be funded anymore.

We were pleasantly surprised to see it was plowed out and several cars were there. People were out looking for “snow” experience and there was plenty of it there. No one heading toward the covered bridge had snowshoes or skis with them, so we took a chance and walked in with just winter boots and chains, thinking it would be packed down enough.

That was true for the first part of the trail we took left after the bridge, but as we went farther, we realized with a sinking feeling, that we were leaving holes in the path and walking was tiring. We went back to get the snowshoes and tried again. That was much better and allowed us to get “off trail” if we desired.

As we snowshoed, we looked for ski tracks but didn’t see many. If someone had skied here recently, their tracks had been covered up by walkers and snowshoers after them. A few errant tracks went off the packed trail but then disappeared. With the crust broken out by others and powder underneath, it looked very skiable with backcountry touring gear. Since ours was way back at the car, we decided to try that another day.

The Nanamocomuck Ski Trail has quite a history. The Lower Nanamocomuck Ski Trail was created by White Mountain Forest employees as a recreational ski trail during the year 1980-81. They even used it for an employee ski race called the “Nanamocomuck Ski Race.” The trail was the idea of District Ranger Verland “Swede” Ohlson. It was constructed by Forest Service employees, led by Homer Emery, team leader, along with Cort Hansen, now co-owner of Ragged Mountain Equipment.

The Lower Nanamocomuck Ski Trail is a mixture of forest roads and other trails. It connects the Paugus Trail (FR 209), the Wenonah and Wenunchus Trails, and Deer Brook Road (FR 28).

I consider this the start of the Nan, but the first trail sign is about a mile in, just past a log landing. In this gravel road section, there are three side ski trails marked blue diamonds — two on the right, and one on the left. On our Tuesday foray, we saw no evidence that anyone had skied those trails and some of the blue diamonds were missing after recent logging.

In the summer, when we rode our mountain bikes here, we were stopped by numerous “tank traps” left by the Northeast Swift Logging Project. Those steep-sided ditches required dismounting. We turned around after crossing a few too many.

I’ve been told these were fixed by the Forest Service this fall as one of their last projects. We didn’t get that far on our snowshoes, so I can’t confirm that, but I trust my sources. When I’m feeling better, I’ll ski out to check it out.

It was beautiful Tuesday, tromping along in the snow, next to the icy Swift River, with sun-struck mountains in the distance. Snow covered evergreens completed the wintry scene. We thoroughly enjoyed our snowshoe trek up the Lower Nanamocomuck Ski Trail. We went as far as we had energy and time for, then turned around. That’s the beauty of the Nana — you can do as much as you feel like and still get that feeling of winter exploration.

Over 25 years ago, we actually skied the whole length of the Lower Nana with Emily and Peter Benson. We left one car at the covered bridge and placed another at Bear Notch Road. The beginning from Bear Notch Road was a little daunting, with quick drops and turns. Old Forest Service “Nanamocomuck Ski Race” videos showed many skiers crashing there. I was no exception. But, the snow was soft and forgiving, so we journeyed on.

Eventually, we made it to the Swift River and enjoyed skiing along its banks. In 2011, part of these banks and trail were washed out by Hurricane Irene’s high waters. The Nana has been re-routed around that washout.

Near Rocky Gorge, the trail becomes the Wenonah Trail and goes around Fall Pond. After it crosses the Cilley Brook Bridge, the Wenunchus Trail used to turn left and form a more challenging loop back to Nana. After recent logging activity, I’m not sure that trail is still skiable. For skiers wanting an easier way, staying on the Nana would be a good choice.

The final stretch on Deer Brook Road is a pleasant, mostly gradual downhill ski to the bridge. For variety or challenge, the side ski trails can be tried. Tired skiers at this point in the 6.9-mile ski might opt for the easy way. I’m guessing that’s what we did way back then.

The appeal of the Nana is there are several options as to routes and equipment. You can do the whole thing by parking two cars, or opt to do a section of it. The upper section from Bear Notch is the most challenging, but you can exit at Rocky Gorge. Another option is to start from Rocky Gorge and ski down to the Covered Bridge. Since the bridge is closest to where we live, we tend to start there and ski or snowshoe up as far as we want, then turn around.

The trail, in right conditions, is a great ski, but it also is a very pleasant snowshoe walk. Load up your car with your snow gear and go check it out.

January Learn To Ski Month- Check with local Nordic Centers to find out about special learn to ski package rates and events.

Sally McMurdo is a cross-country ski instructor at Jackson Ski Touring Foundation. For almost four decades, she has explored New England's groomed and ungroomed trails on all kinds of skis.