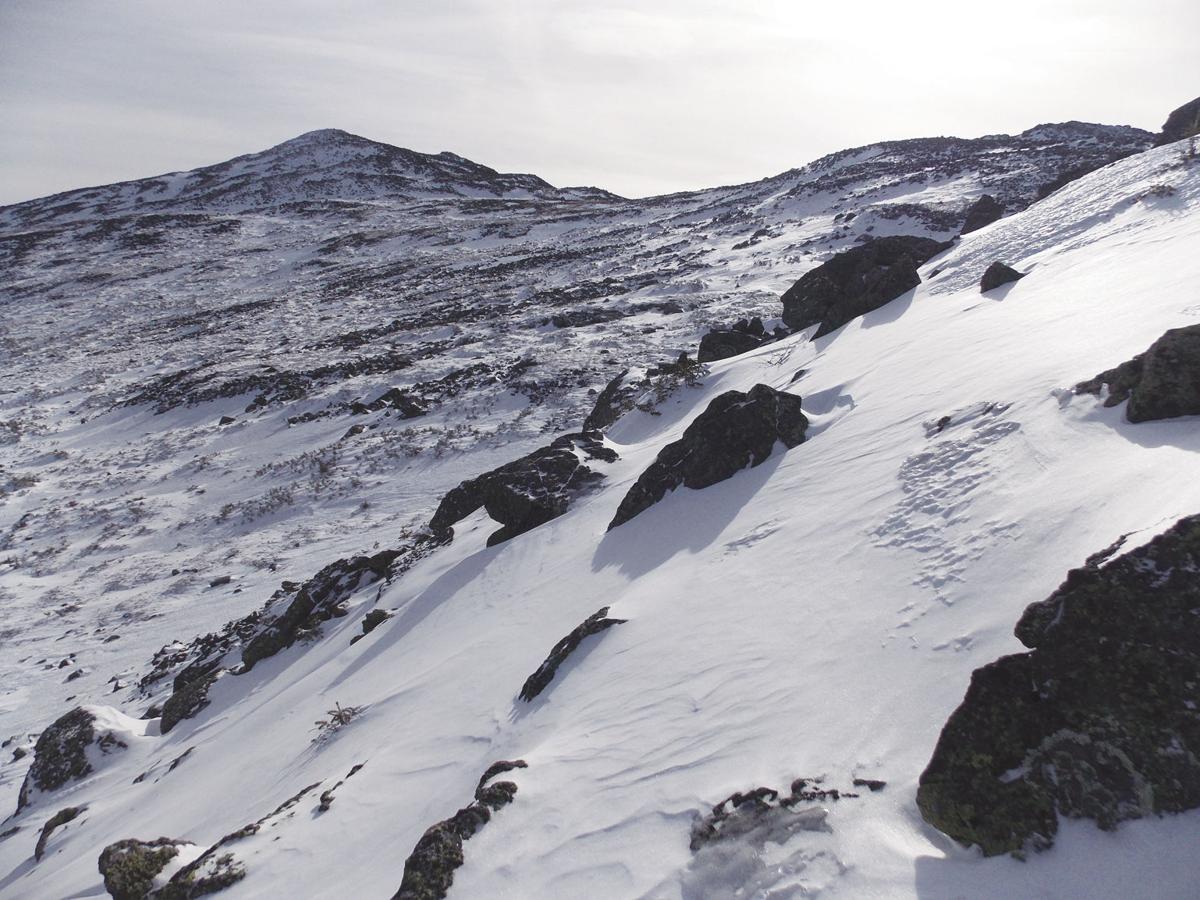 Looking towards the distant summit of Mount Adams while ascending the Lowe's Path. (ED PARSONS PHOTO) 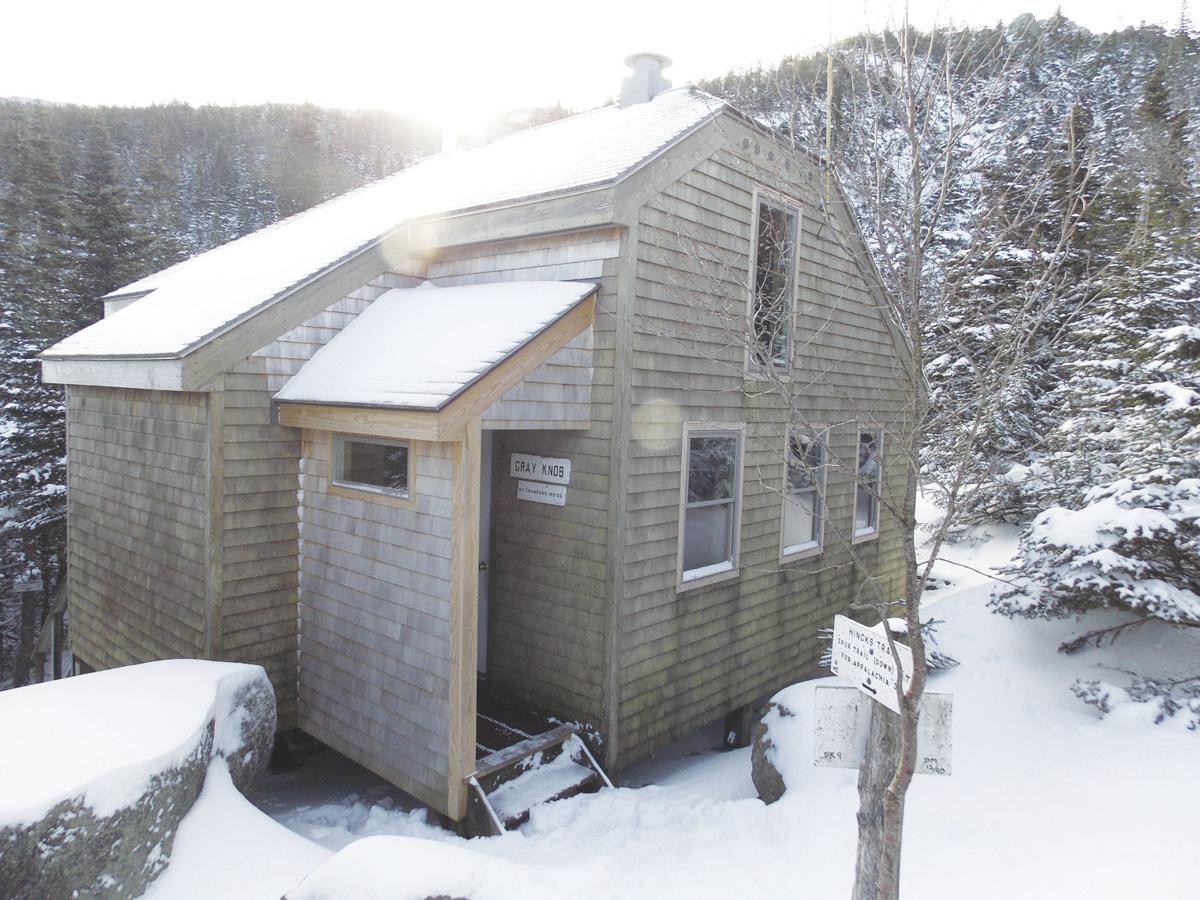 Grey Knob Cabin just below timberline on Mount Adams. It is reached by the Lowe's Path. (ED PARSONS PHOTO)

I likely won’t get up Mount Adams (5,799 feet) this winter for various reasons. But this triangular peak is one of the highlight destinations in the White Mountains. People who climb it, remember that day without any trouble. Second highest in the region to Mount Washington, it is a true summit with no man-made structures except a low wooden sign for multiple trails, which is often decorated with ice feathers in the winter.

Back when I worked in the AMC Hut System in the 1960s, I enjoyed climbing to the summit from the nearby Madison Hut, located in the Madison/Adams col. On the summit was an exotic Sanskrit letter painted in red on one of the rocks, signifying the universal sound OM. It strangely fit on this pointed wild summit, and back at the hut I found out it was painted by an exotic group from Philadelphia called the Aetherius Society. Those interested can find more about them at aetherius.org. By the 1980s, forest regulations required that the symbol be erased.

The favorite way up Mount Adams for day hikers in the winter is the Air Line from the Appalachia parking lot on Route 2 in Randolph. The Lowe’s Path from the Lowe’s Store on Route 2 also goes to the summit, and that is my favorite. It passes the Grey Knob Cabin just below timberline, a great place to pause for a snack and talk to the caretaker from the Randolph Mountain Club before heading above the trees to the top.

The following is a story I wrote in 2015 about a winter hike up this trail. It was on a Wednesday. It will give you a feel for the hike in the winter.

Wednesday was a fascinating day weather-wise for experiencing contrasts. It dawned clear and very cold. Still, I was interested in climbing Mount Adams (5,799 feet). My internet service happened to be down that morning, so I wasn’t able to check the Mount Washington Observatory Website for mountain conditions. But the air was still, and I knew that there would be solar warming. The local weather report sounded reasonable. So I headed out.

In Gorham, I stopped for gas. An old mountain friend was getting gas and we exchanged words. Upon hearing where I was going, he said: “Are you crazy? It’s 17 below here and probably 30 below up there!” I smiled meekly and said I would turn around if it was.

At the Lowe’s Store out on Route 2 in Randolph I paid my $1 fee for parking. After a few lighthearted words with Lucille Lowe about my questionable activity that day, I headed across the street and up the Lowe’s Path.

The 4.7-mile Lowe’s Path is the oldest trail in the northern Presidentials from the Randolph valley. It was built in 1875 and 1876 by Charles Lowe and William Nowell. Located on a spur trail just below timberline in 3.2 miles is Gray Knob cabin. First built in 1905, it was rebuilt and insulated in 1989, and is popular in the winter. The full-time caretaker position is shared by two, who stay there on alternating weeks.

The Lowe’s Path is considered the easiest way up the mountain in the summer. In the winter, the Air Line and Valley Way are more popular with peak baggers and packed down quicker. On Wednesday, the conditions on the Lowe’s Path were interesting.

I was chilly and soon I stopped to put on an outer layer of wind pants, and also my outer mitts. After that, I achieved the perfect balance of layering for comfort in the cold air.

There were a couple inches of new soft snow on top of the packed trail. I quickly moved uphill, and reaching the steep section halfway up, there were ice flows beneath the soft snow.

For traction, I had on Hillsound Trail Crampons, rather than full crampons. Combined with my old mountaineering ice axe for support, I was perfectly comfortable on that terrain. However, I was leery about later descending the icy sections covered with a few inches of snow. The short spikes on my traction might not get a good grip on the steep ice through the snow. I began to think about descending Mount Adams on a different trail back to Route 2.

After a nice aerobic effort, I reached the Quay, a beautiful open spot next to the spur trail to Gray Knob. The visibility was great to the west. Camel’s Hump stood out sharply on the horizon. There was no wind and the temperature was mild in the direct sun. I turned and walked through the woods to the cabin, took off my traction and went in.

It was warm inside. The caretaker Adam Fryska (there in the winter of is 2015) was reading next to a new soapstone woodstove. I hung up outer layers to briefly dry, and had a snack.

There were other new improvements there. Natural firewood was scarce there, and in the past the caretaker would light the stove in the morning and let it go out until the evening. The cabin would be chilly all day. This was not only uncomfortable but caused condensation in the cabin. This promoted mold and rot.

The last two years, they have alleviated the problem. They have purchased compressed wood chip blocks that fit in the stove called Bio Bricks. These come wrapped in large square bundles. In the autumn, enough of them are helicoptered up to last the winter. Now the cabin is warm and dry. In such a setting, who could ask for more?

Out the back window, there was a modest set of solar panels that powered the communications radio. Back down in Randolph, Bill Arnold has made the 8 p.m. radio call to Gray Knob since 1976.

I told Adam that I was not staying the night, and just passing through to the summit. He said it was a great day for it. There was a major temperature inversion with the summits warmer than the valleys. That morning the temperature on Mount Washington had been 12 degrees and it was warming quickly with the sun (the day before on Tuesday, the temperature at the Observatory has been 20 degrees warmer than Conway).

It was a perfect day. I headed out, and at the Quay continued up the Lowe’s Path, reaching timberline and the long stroll towards the main summit.

There wasn’t a lot of snow, and I had to link patches of hard snow to keep from dulling my foot traction. From the top of the promontory called Abigail Adams (5,355 feet), there was a nice chute of snow down to an ample snowfield to the north of Sam Adams (5,585 feet).

I walked up to Thunderstorm Junction and picked my way up the summit cone, where the wind picked up. On top of Mount Adams I continued over sharp boulders down to a cozy corner out of the wind on the east side. In such a spot, there is nothing better than a peanut butter and homemade jelly sandwich.

Later, I took the Gulfside Trail down to Madison Hut. A group of peakbaggers lingered in the sun by the front door before heading up Mount Madison. Some were working on the GRID, which is all 48 4,000 footers every month of the year. Soon they started up the trail to Mount Madison in a line of eight.

I went down the well-packed Valley Way, and just before Route 2, took a left on the Rail Trail, used in the winter as a snowmobile corridor.

No snowmobiles passed me on the pleasant sunny flat walk back to the bottom of the Lowe’s Path. Walking across Route 2, my body was thankful for both the exercise that day, and the end of it.