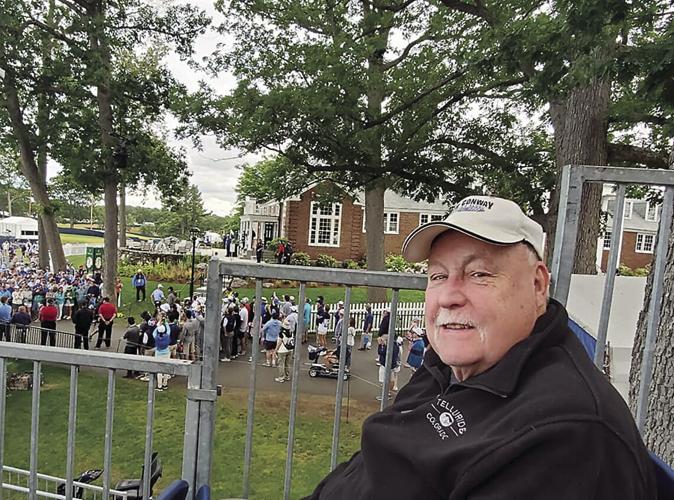 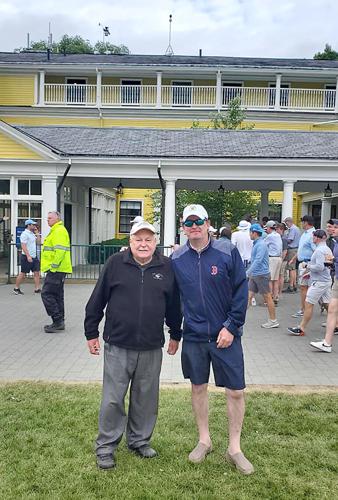 Gene and Erik Chandler in front of the clubhouse at The Country Club in Brookline, Mass., site of the U.S. Open Championship last Saturday. (COURTESY PHOTO) 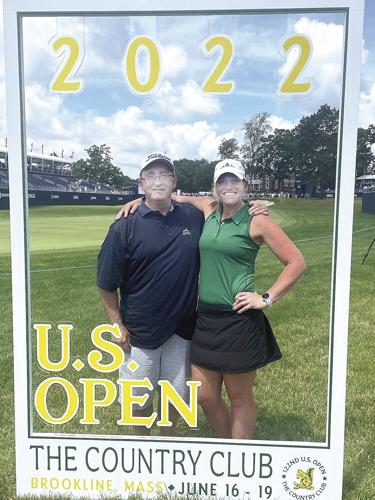 Kennett High alumni Tara Watt (right) and Bobby Mickle took in some practice round action at the U.S. Open at The Country Club in Brookline, Mass. Watt also got runner-up Will Zalatoris’ autograph. (COURTESY PHOTO) 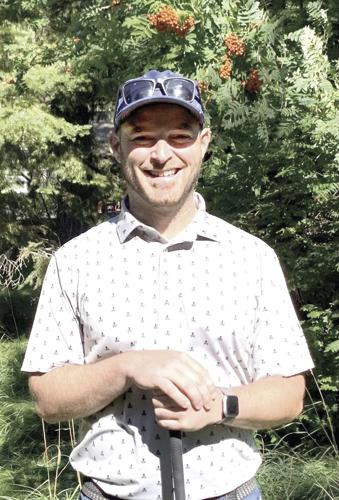 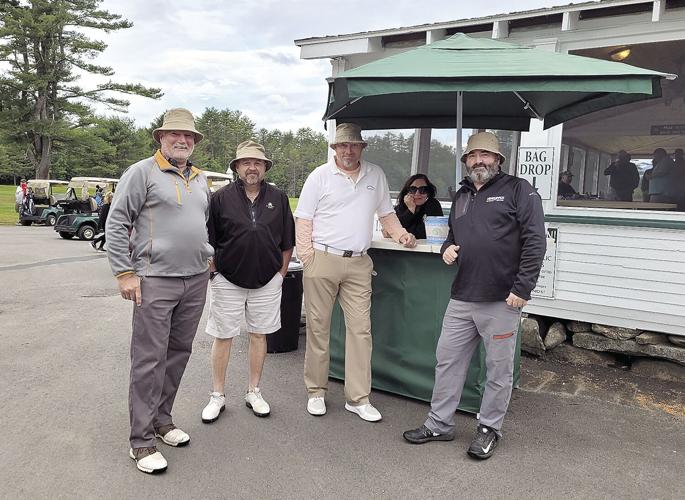 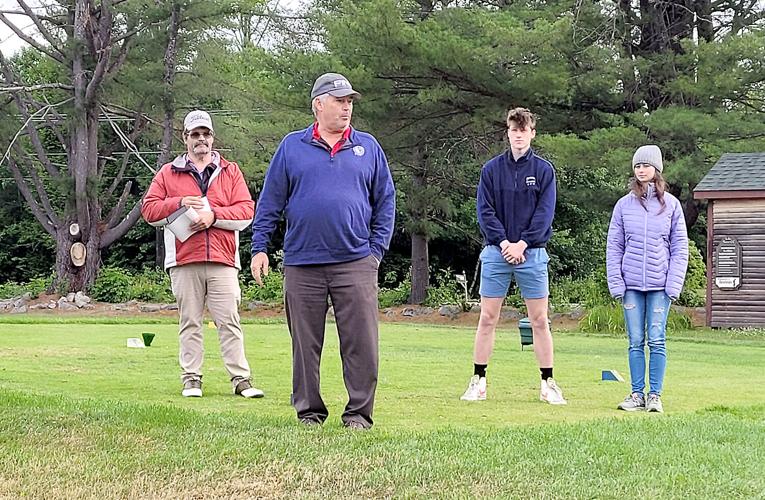 Gene and Erik Chandler in front of the clubhouse at The Country Club in Brookline, Mass., site of the U.S. Open Championship last Saturday. (COURTESY PHOTO)

Kennett High alumni Tara Watt (right) and Bobby Mickle took in some practice round action at the U.S. Open at The Country Club in Brookline, Mass. Watt also got runner-up Will Zalatoris’ autograph. (COURTESY PHOTO)

If you’re going to win your first major why not do it on a course you love, and equal history in the process. In winning the U.S. Open at The Country Club in Brookline, Mass., last Sunday, England’s Matthew Fitzpatrick joined Nicklaus as the only other male golfer to win the U.S. Amateur Open and U.S. Open at the same course.

Fitzpatrick won the U.S. Amateur Open in Brookline in 2013. In his effort to repeat history last week, he stayed in the same house he had in 2013. He's the first player from outside the U.S. to win both the U.S. Open and U.S. Amateur.

Attendance over the four days came in at 175,000 patrons. Among those were a few locals. Gene and Erik Chandler were there last Saturday, while Steve Cote was on hand for the final round Sunday. All three reported it was a wonderful experience.

This was Erik and Gene's second U.S. Open, having attended the 2020 championship at Winged Foot Golf Club in Mamaroneck, N.Y. They had seats in the hospitality tent at the par 3, 109-yard, 11th green. The one that looks like you could throw a ball onto, but with the elevated green, it proved to be one of the most difficult holes on the course.

“We were there for quite a while before we saw our first birdie,” Gene said. “I think we only saw three all day. That green was tough to read a putt on.”

Gene had been to the Brookline course before.

“I went in 1998 for the Ryder Cup,” he said. “It was nice to go back there. It’s a beautiful but extremely difficult course. Brookline has a lot of great golf history (the oldest country club in the United States).”

Toward the end of play on Saturday, Erik and Gene bought tickets for the grandstand on the 18th tee.

“It was a great Father’s Day present,” said Gene. “We went to the Red Sox game (against Detroit) on Sunday afternoon (Sox won 6-4).

For Steve, it was the first U.S. Open he has attended. He had been to a couple of Senior Tour events, the Player’s Championship many times and the Master’s twice.

“It was an incredible spectacle and amazing combination of people watching and finding places where you could find a view,” he said.

Steve chose certain holes and then watched multiple pairings go through at a time.

He was able to stake out a front-row spot by the second tee box where he saw the final five pairings tee off.

“We saw Rory (Mcllroy), (Scottie) Sheffler, (John) Rahm, Fitzpatrick and (Will) Zalatoris up close, maybe 10 feet away,” Steve said. “After that, you kind of picked your poison where you wanted to watch.”

He added: “I kept saying, boy, these guys are good. How they recover after a bad shot, where our rounds would continue to spiral, and so calmly get out of trouble was impressive.”

Steve was at the 10th hole when Grayson Murray had a bad moment. Sitting in the fairway, he hit his second shot into the deep rough.

“He promptly snapped his six-iron over his knee,” Steve said. “He put half of the club back into the bag. With eight holes still to play, I said, he’s probably going to need a six-iron at some point.”

He added: “What amazed me, was the course designer (Willie Campbell in 1895) is known for very, very difficult rounded greens, false fronts and heavily-protected bunkers, but the greens were incredibly fast. We were able to cross a couple of fairways and they were the tightest lies I’ve ever seen. It was like hitting off of linoleum. The first cut (in the fairway) was like the fairways we’d know. Those top-shelf golfers were incredible.”

Steve would like to play The Country Club one day.

“I texted Peter Fresco and let him know I was very confident I could shoot a smooth 150,” he said, laughing.

Let’s get after it.

Where did you grow up and how old were you when you started playing golf?

“I grew up in Northern California in a small community called Lake of the Pines. We lived on the 10th fairway of the golf course. My friends and I used the fairway in summer evenings as our own person backyards. I would run around barefoot hitting the ball as far as I could and wait for the sprinklers to come on so we could cool off. I played for the first times when I was probably six or seven but did not stick with the game. I played baseball, basketball and football. I picked it back up in my early 20s.

How did you end up in the golf business?

“I started out working on the grounds crew for a summer to get free golf: cutting cups, mowing roughs, fairways, tees and greens. I would work until 2 p.m. and then go walk 18 or more and the head pro told me there was a position as an assistant at a neighboring course and I should apply, so I did and got the job.”

What drives you to success on and off the golf course?

“Success keeps me content. I want to do well for my family, my fiancé Jacqui and my dog Ella. Also being competitive is helpful.”

What is your favorite golf course in America?

“My favorite course in America would be a tossup between Grays Crossing and Old Greenwood in Truckee, California. I worked as an assistant at both courses and they are the same company, I played those two courses more times than I can count and they about absolutely beautiful and meticulously maintained. I owe a lot to those courses, I met Jacqui working there, she the new cart girl and I was the new guy in the golf shop.”

What do you like most about working at Wentworth Golf Club?

“The people, we have a great group up here. It is easygoing and lighthearted, and the views aren’t half bad.”

Eagle Mountain Golf Course, Carter Notch Road, Jackson, (603) 383-9090: Club Pro Bobby McGraw reports that after four weeks in Don Ho action there is a tie for first place. The Chislas, with a great round of -7 last week have tied Team Par Tee at -17.

The Martreenies sit in third at -15, followed by the Switchback Team at -12

McGraw will conduct a short game clinic this Saturday at 10:30 a.m. on the basic fundamentals needed to be successful when chipping or pitching. The fee is $20 and the class is limited to six students. Call the pro shop at (603) 383-9090 to sign up.

Closest-to-the-pin went to Robin Garside who put her shot 4'1" from the cup.

Closest-to-the-pin went to Steve Phillips at 9'7".

Play continues next week with the women teeing it up on Monday and the men on Tuesday.

This tournament is always unique because of the raffle prizes. Not only were there golf clubs and hats, but there were also packages of meat given out.

“You could say the weather was not too bad,” said Nancy. “Windy and chilly, feeling like a fall day. But, no snow (Mount Washington got four inches of snow that day).”

Mark your calendar for the Junior Golf program which will run every Tuesday and Wednesday beginning on July 5, from 3:30-5 p.m. Children can participate each week or whenever they can. This is open to the public.

The annual member-guest is scheduled for July 10. Registration forms are on the website (lakekezargolf.com) and you can call the clubhouse at (207) 925-2462.

Mark your calendars for the July Champ of the Month, which runs July 15-17.

The 42nd annual Memorial Hospital Tournament is scheduled for July 21.

Thanks to golfers and sponsors, last year’s event raised over $55,000.

The winning team this week was the Pin Seekers with a score of 129 followed by team Shanks-A-Lot with a 135, while third went to Pin High with a 136 and there was a tie for fourth place between teams Fairway 5 and the Oak Lee Boys, each at 142.

Competition winners this week in the long putt for the ladies go to Erin Jacobs with a putt of 8’ 2” and the for the men Chris Bates took honors at 11’ 2”.

Winners for closest-to-the-pin were Ellen Eiermann at 15’ 9” for the ladies and Paul Chippendale at 3’3” for the men.

Atop the leaderboard after five weeks are the Pin Seekers followed by Shanks-a-lot and Fairway 5.

Mark your calendar, this Sunday, June 26, is the annual spring 4-ball event.

Linderhof Country Club in Glen will host the annual Jack Butler Memorial Golf Tournament on Sunday, June 26. Registration starts at 9:30 a.m. with a shotgun start to follow at 10 a.m. Lunch is slated for noon.

This is for six-person scramble teams. The cost is $60 per player and includes golf and lunch. People with to get just lunch can do so for $25.

"The object of golf is not just to win. It is to play like a gentleman, and win.” — Phil Mickelson

If you have any great local stories, golf scores or photos, tee them up and send them my way, please, so we can include them in an upcoming column. Contact Lloyd Jones at lloyd@conwaydailysun.com. Hope you have a bogey-free week.