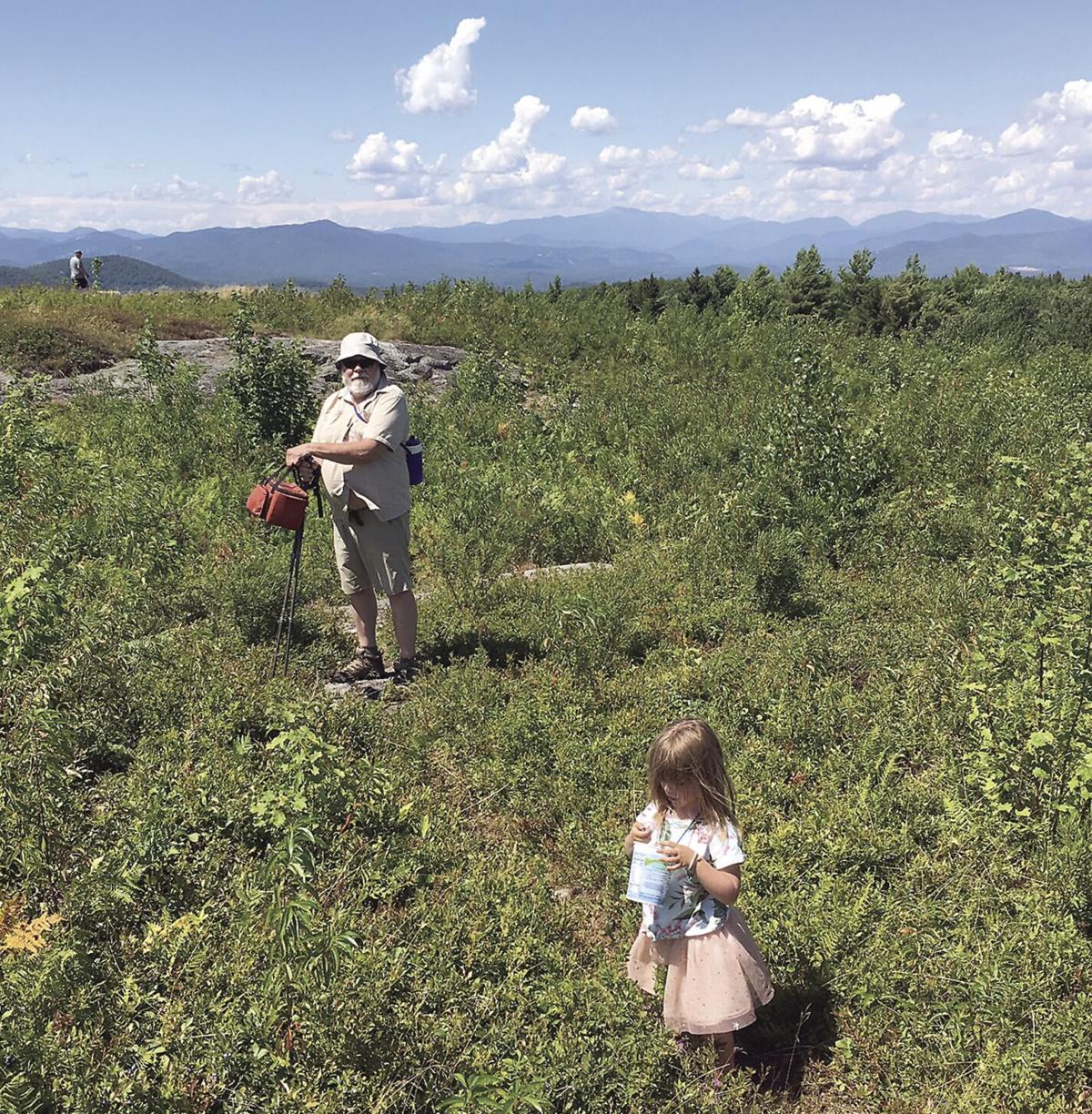 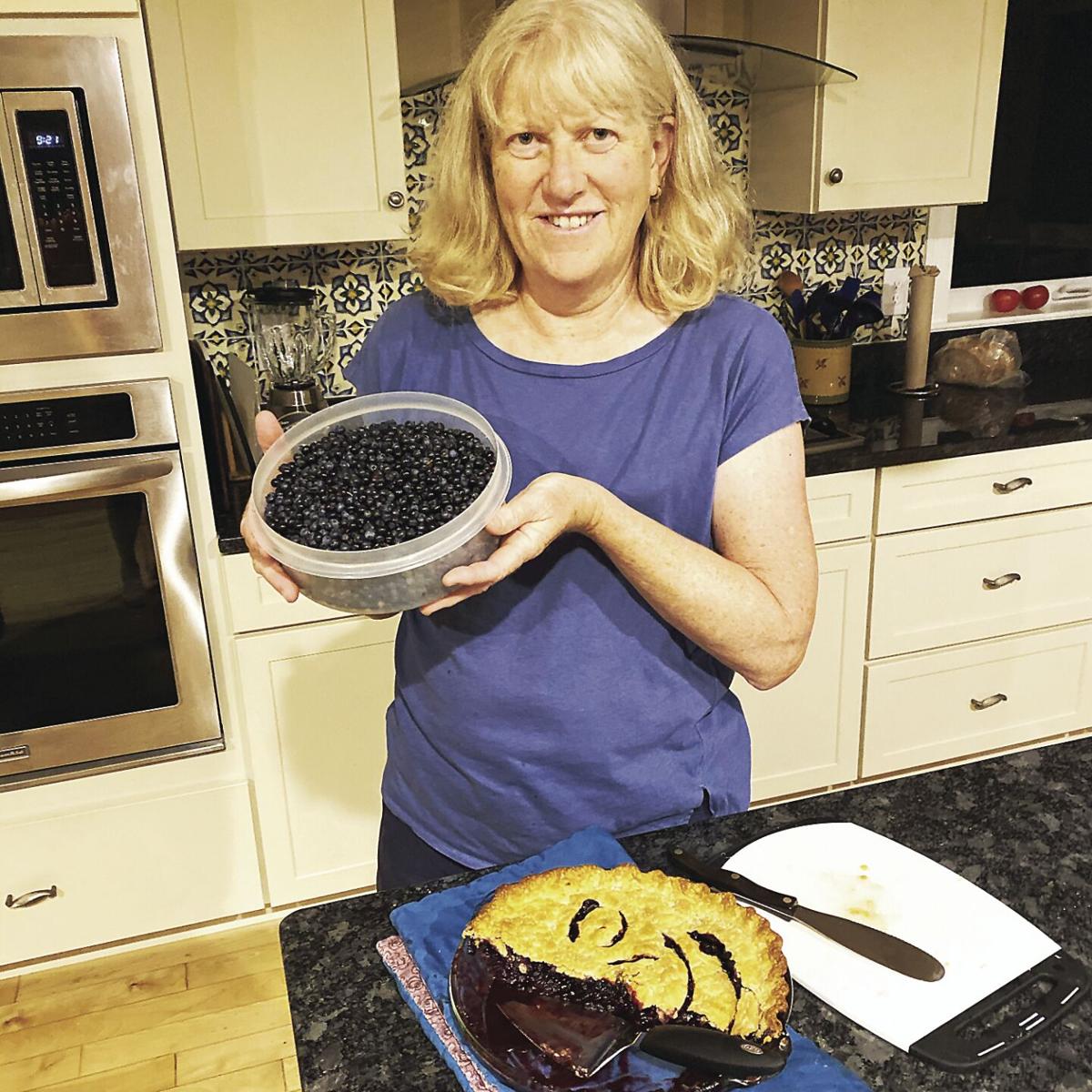 Jackson's Laurel Smith picked her blueberries from her kayak on Chocorua Lake, then made a luscious pie. (LAUREL SMITH PHOTO) 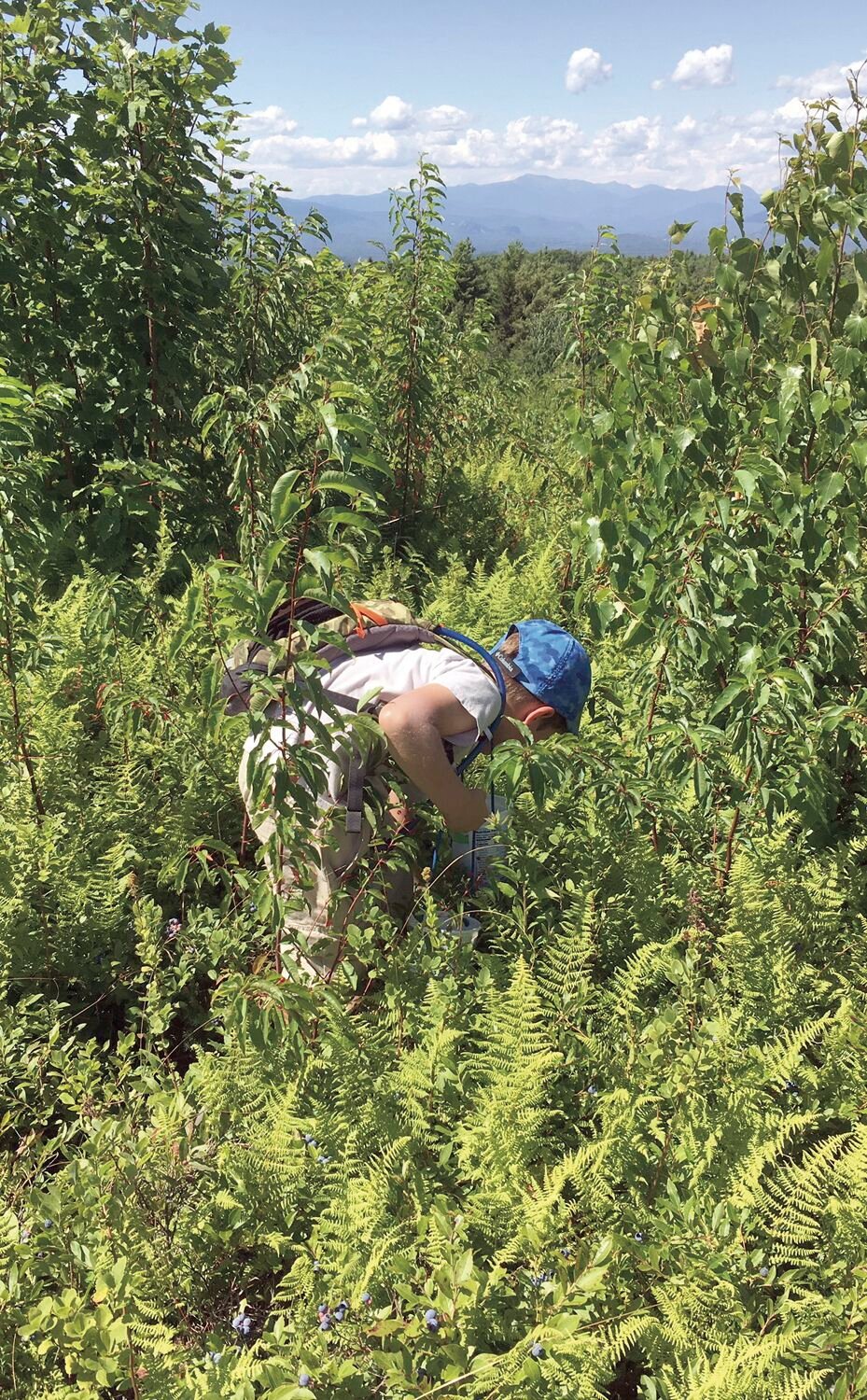 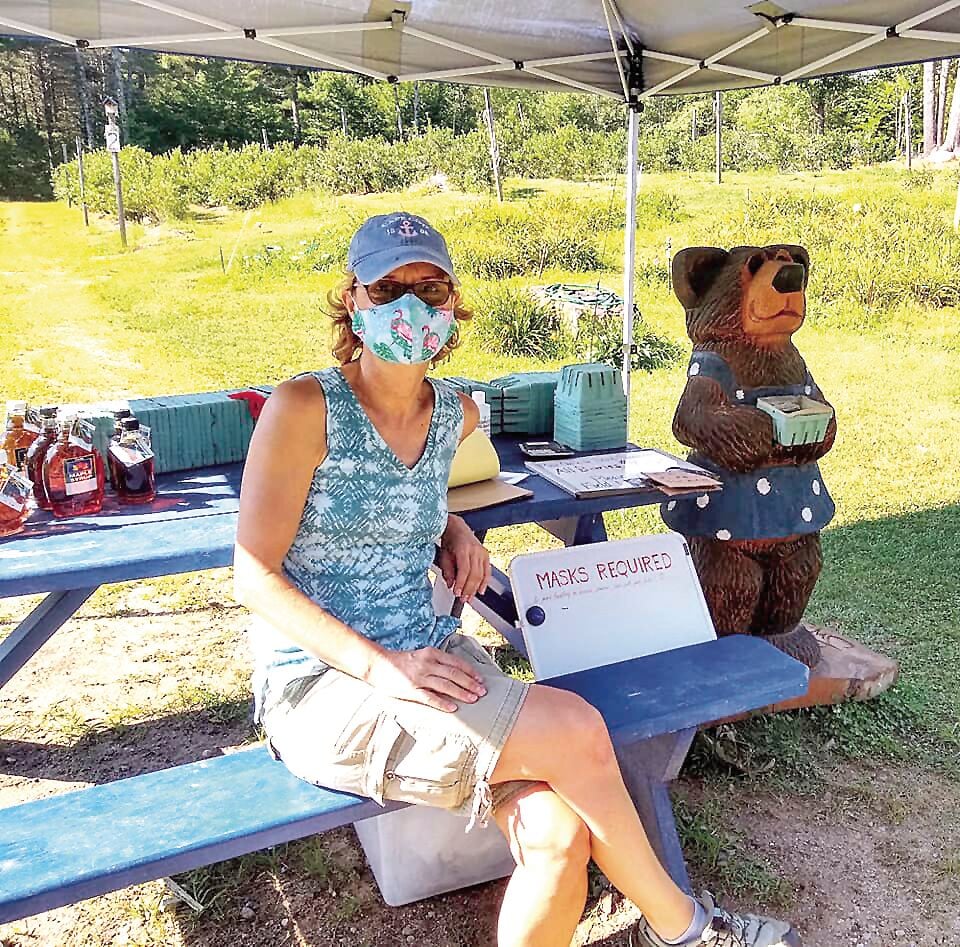 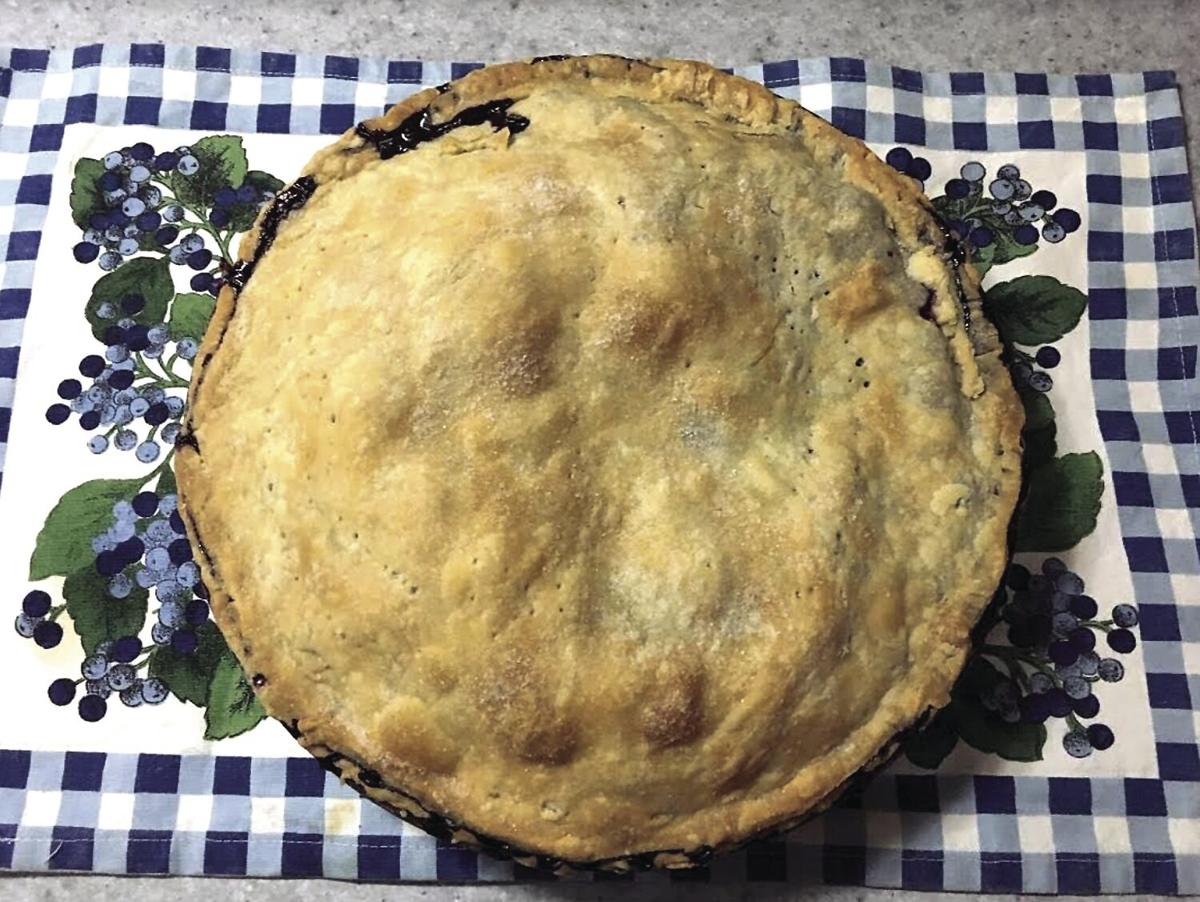 Jackson's Laurel Smith picked her blueberries from her kayak on Chocorua Lake, then made a luscious pie. (LAUREL SMITH PHOTO)

August stirs two cravings for me — eating fresh-picked corn and blueberries. Ever since I moved to New Hampshire, I’ve looked forward to eating both as often as possible.

Nothing tastes more like summer than buttered sweet corn and fresh blueberries, eaten raw or baked into pancakes, muffins, and pie-oh my.

I can get my corn fix at Weston’s, Sherman’s, or other farm stands in the Valley. I can find blueberries there, too. But, for real New Hampshire blueberries, I prefer to pick my own.

Last week, when Facebook friends posted about picking blueberries while hiking or kayaking, I knew it was time to go. A picture of a fresh-baked blueberry pie was all the motivation I needed.

As I thought of all the ways I’ve picked blueberries over the last 20 years, a Dr. Seuss’ book, “Green Eggs and Ham” came to mind. With apologies to him, here’s my “Blueberry and Pie” version:

How do you pick blueberries for pie?

I pick them many ways, oh, my!

I love picking blueberries for pie!

Would you, could you pick them on a bike?

Yes, I’ve picked them on a bike.

Would you, could you, on a hike?

Yes, I’ve found them on a hike.

Would you, could you, on a boat?

Would you, could you, from a goat?

What fun picking blueberries for pie!

You can pick blueberries anywhere and any way you desire. You just have to know where to find them. A simple way is to go to “Pick Your Own” (PYO) places like Eaton’s Berry Knoll: bbestberrylady@gmail.com, Sandwich’s’ PYO Farm near Durgin Bridge or Chocorua’s Merrybrook Farm Organic Blueberry Farm:tim.o.rich@williams.com. You can count on finding them there in season.

Another option is to pick at the Carroll County Farm in Ossipee, on Saturdays (rain date Sundays), from 9 a.m. to 1 p.m. Scout Troop 150 from North Conway, 151 from Tamworth, and 142 from Moultonborough open blueberry fields they tend at the Carroll County Farm in Ossipee for public picking. Take Route 16 south, then turn west on Route 28, to County Farm Road. If you don’t want to drive that far, they sell their picked blueberries at the Saturday’s Tamworth Farmer’s Market at Brett School.

If we can, we like to try “natural” picking first, hunting for wild grown berries. This time of year, whether we’re on foot, bike or in a boat, we carry a berry container of sorts, just in case we find some. There are always two blueberry buckets in the van, but we’ve also been known to use bike water bottles and plastic bags.

Where can you find wild blueberries (vaccinium angustifolium)? First, your family can be blueberry bloodhounds by learning to identify the plant by its glossy blue-green narrow leaves and watching for berries to form and ripen. Once you know what the plant looks like, you’ll find them everywhere. Eating a ripe blueberry makes the hunt worth it.

Next, it helps to know the blueberry’s habitat. Wild blueberries like a dry, open ground with lots of sunlight. These lowbush blueberries need to be seen by bees and birds to be pollinated and propagated. They also like acidic soil. Look for oak trees and you’ll find good blueberry land. Mother Earth News recommends foraging for them on “disturbed” land- “land where man has removed trees and undergrowth, then abandoned the land, leaving sunny ground.”

The Mount Washington Valley is a great area for blueberry hunts. Its glacial soils and northern climate are perfect for growing blueberries. Maine may claim the wild blueberry as its state fruit, but New Hampshire has plenty of berries, too. Our local mountain, Attitash, even gets its name from the Native American Abenaki word for blueberry.

Blueberries are part of our heritage and our family's summer tradition.

For those who like to combine biking and blueberries, here some local places to begin your quest: Rob Brook Road — along the roadside in open areas; Thorne Pond, Bartlett — in the open fields; Echo Lake/Cathedral Ledge area — along Cathedral Ledge Road, in open areas near park trails; Whitaker Woods-in the open fields and powerline cut; Moats area —near Ultimate Single Track and along forest service roads; Pudding Pond — along powerlines or in Sticks and Stones and near pump track, where logging has occurred; Albany Town Forest — in logged off areas and field margins; East Bear Paw Property off Route 302 near the Maine state line — along woods roads and trails through recently logged land; and Porter Road, Fryeburg, Maine, where the road turns to dirt — look in open areas on the airport side or road

Last Wednesday, we decided to “hike and pick” with our grandkids, Iver, 7, and Juliet, 4. Our destination was Eaton’s Foss Mountain. This town-owned mountain has a steep, sometimes rough drive over a dirt road to its parking lot. However, the new trail there makes walking up easy enough for young kids and old-timers.

The Town of Eaton leases the lower blueberry fields to commercial pickers. Signs along the way tell you where not to pick. Free public picking starts beyond the stone wall.

As we hiked up midday, we spied commercial pickers, working in the shade, with berry sorting machines. Iver was curious about their operation, so we stopped. They showed him their equipment and described how it worked. Boxes of early picked and already cleaned berries were stacked nearby to be taken to local markets.

We hiked on, stopping at an interpretative sign about Foss Mountain goats. In the past, they were used to rid the fields of weeds and other plants. Fortunately, goats won’t eat blueberries. So, yes, I could pick them on a goat.

Saturday, we set out to get the rest. After stopping at Tamworth’s Farmer’s Market, we drove down Route 25 to Sandwich, searching for Durgin Bridge’s PYO blueberry patch. Turning right at Bennett Corners onto Route 113, we spotted the first PYO signs. They directed us to Foss Flat Road. Turning right there, we drove to Durgin Covered Bridge, crossed over the Cold River, and followed signs right. They advertised, “PYO blueberries, we’re loaded!” A dirt road at the powerlines led us to the road’s end where we found high bush blueberry bushes laden with berries.

The setting was pleasant with Whiteface views and Cold River babblings below. The picking was easy and fast, with large, plump berries filling our buckets in no time. There was definitely a big, luscious blueberry pie in our near future!

Whether you pick them on foot, bike, boat or with kids, get out there soon to sample the bountiful blueberry harvest and make some pie, too!