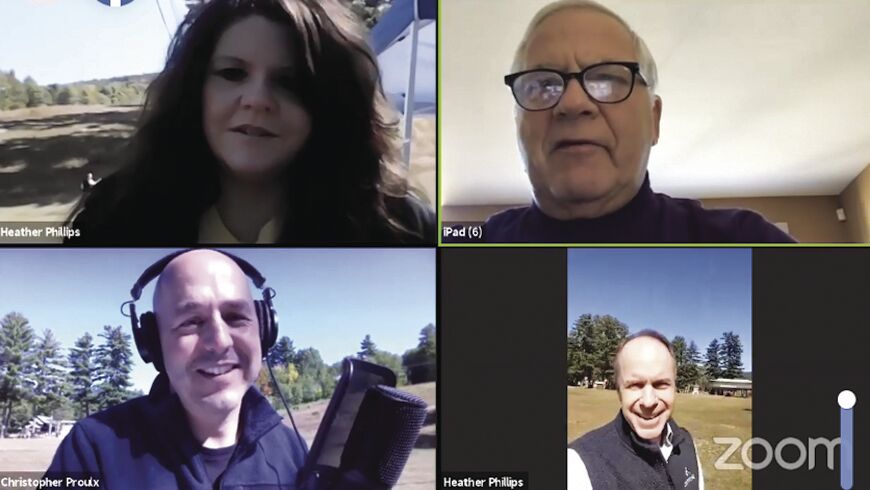 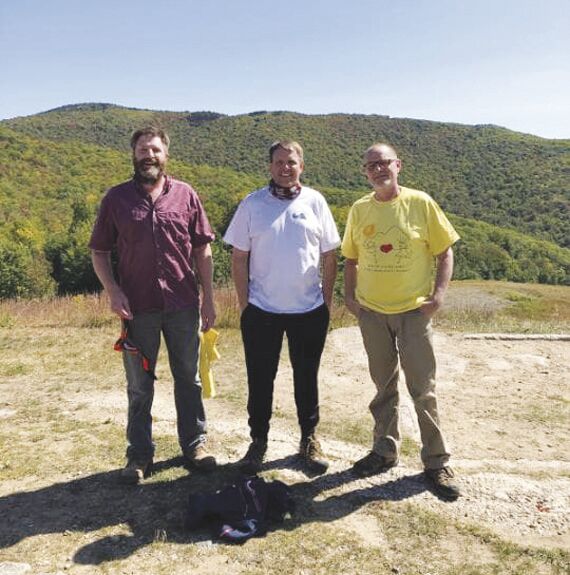 The 23rd annual Jen's Friends Hillclimb was held virtually Sept. 19 and surpassed its $100,000 fundraising goal, with more contributions being made through Sept. 30. Among the select group of hikers who were invited to climb to the summit of Cranmore Mountain Resort were brothers of the late Jen Hill (from left): Brian, Tom and Doug. (COURTESY PHOTO)

The 23rd annual Jen's Friends Hillclimb was held virtually Sept. 19 and surpassed its $100,000 fundraising goal, with more contributions being made through Sept. 30. Among the select group of hikers who were invited to climb to the summit of Cranmore Mountain Resort were brothers of the late Jen Hill (from left): Brian, Tom and Doug. (COURTESY PHOTO)

CONWAY — On what would have been a perfect day for an in-person Jen’s Friends Climb Against Cancer, the virtual version of the 23rd annual event last Saturday surpassed the $100,000 fundraising goal for the local non-profit, with a tally of $106,648 as of Monday and with funds continuing to come in through Sept. 30.

“It was amazing,” said Heather Phillips, vice president of the volunteer organizations founded in 1998 with a goal of helping local cancer patients.

“In a pandemic year, to be able to surpass our goal, when everyone is facing so many challenges? I am floored by the community’s generosity,” said Phillips on Monday.

Jen’s Friends' board of directors announced last spring that this year's event would be held from July to Sept. 30, with participants able to do their own hike, bike, walk or even dance.

One participant raised funds by climbing stairs in Hawaii.

“I think the virtual model is here to stay in some form,” said Phillips. “I think the climb will return once it is safe, but we will also incorporate a hybrid model of keeping the virtual aspects as well along with the hike.”

They both said they missed seeing people in person and the sense of kinship that is generally shared at the climb.

“Of course, everyone missed that, no question,” said Phillips.

But Proulx added: “I am super impressed by this year’s turnout. For our 20th anniversary (in 2018), we raised $125,000 (with the raffllng of a new Subaru), so this is a great turnout by the community online.”

The virtual climb received donations from 625 supporters and 190 registrants.

Jen Hill’s brother Doug Hill, now of Georgia, and among the group of 20 people invited to make the climb to Cranmore Mountain's summit in person, was interviewed for one of the segments.

He said he was hiking for his brother Artie and wife, Donna, both of whom are battling cancer, as well as in memory of Jen.

(Artie was present at Cranmore but couldn't climb due to a minor motorcycle accident the night before, Phillips said).

Team leader was Artie and Donna Hill’s youngest daughter, Sydney, 16, of Kennett High. Other Hill family members in addition to Doug and Sydney were Jen's other brothers Brian and Tom Hill and Tom Hill’s son Zack; and Zack’s wife Lily. "Sydney raised nearly a third of the total herself. She did an amazing job," said her proud Uncle Doug Hill.

Doug Hill and fraternity brothers at the University of New Hampshire founded Jen’s Friends in 1998 to assist his sister after her diagnosis with brain cancer. She agreed only if the organization would help others battling cancer as well. She lived to see the first Climb Against Cancer, but died that November.

In his interview, Doug Hill thanked the community for its generous support, as did all of the speakers, including Cranmore General Manager and President Ben Wilcox, and local journalist and 10-year cancer survivor Tom Eastman, brother of the late Steve Eastman, Mountain Ear co-founder who lost his battle with glioblastoma multiforme brain cancer in 2008.

Katelin Murphy of Murphy’s Magic Wand, which raised $7,653, had the top team total for a second year in a row. It climbs in honor of Katelin’s mother, breast cancer battler Mary Murphy of Glen.

Placing second in the team fundraising category was the Hill family, raising $7,362; followed by the Settlers Green team, which raised $3,778.

Top individual fundraiser was Nicholas Mazzaglia of Massachusetts, who raised $8,410, followed by his sister Toni Mazzaglia of Utah at $3,532. They raised their amounts in honor of their late mother, retired science teacher and Jen’s Friends/valley volunteer Daryl Mazzaglia of Bartlett, who died from cancer at age 73 this past May. Third top fundraiser was Valerie Jensen of North Conway ($1,545).

Board members who joined Proulx and Phillips at the end of the broadcast included past president and board member Wendy Holmes; founding board member Ruth Ann Fabrizio; Vice President Joan Daley; Treasurer Charlie Hanlon; Secretary Mary Anne Sledzinski; and board member at large Sara Holtby.

This year, instead of signs being put up on the mountain, they are being prominently displayed on the virtual event page, allowing all family and friends, near and far, to view the “Memory Wall.”

Since its inception, Jen’s Friends has raised more than $1 million and is currently serving 70 patients in Mount Washington Valley, with the organization having a monthly average outlay of between $20,000 and $25,000, according to Phillips.

Recipients receive gas and grocery cards and help with their living expenses.

The organization is totally volunteer-run, with no paid executive director. As Holmes has often said, “The money that is raised here, stays here.”