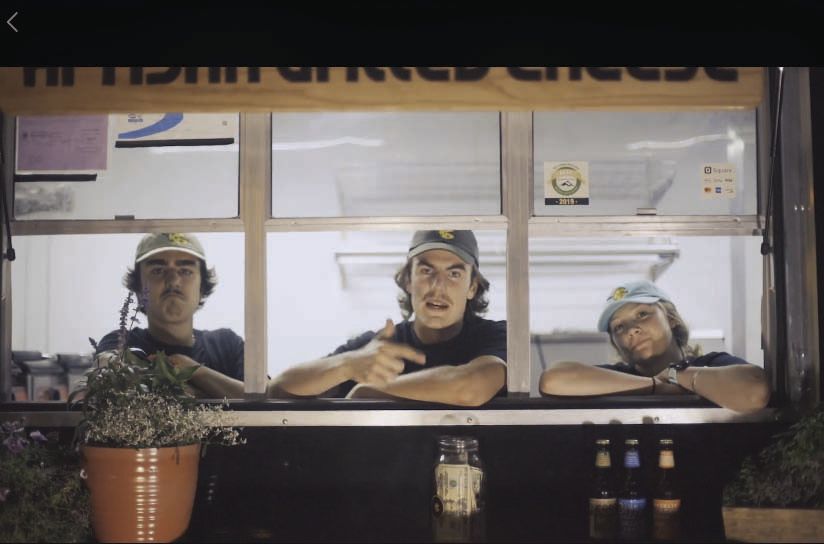 A screen shot of a rap video Cheese Louise made about their ongoing issues with Town of Conway shows owners James Gaudreault (left) and Bryce Harrison and employee Hannah Thelemarck. (COURTESY PHOTO) 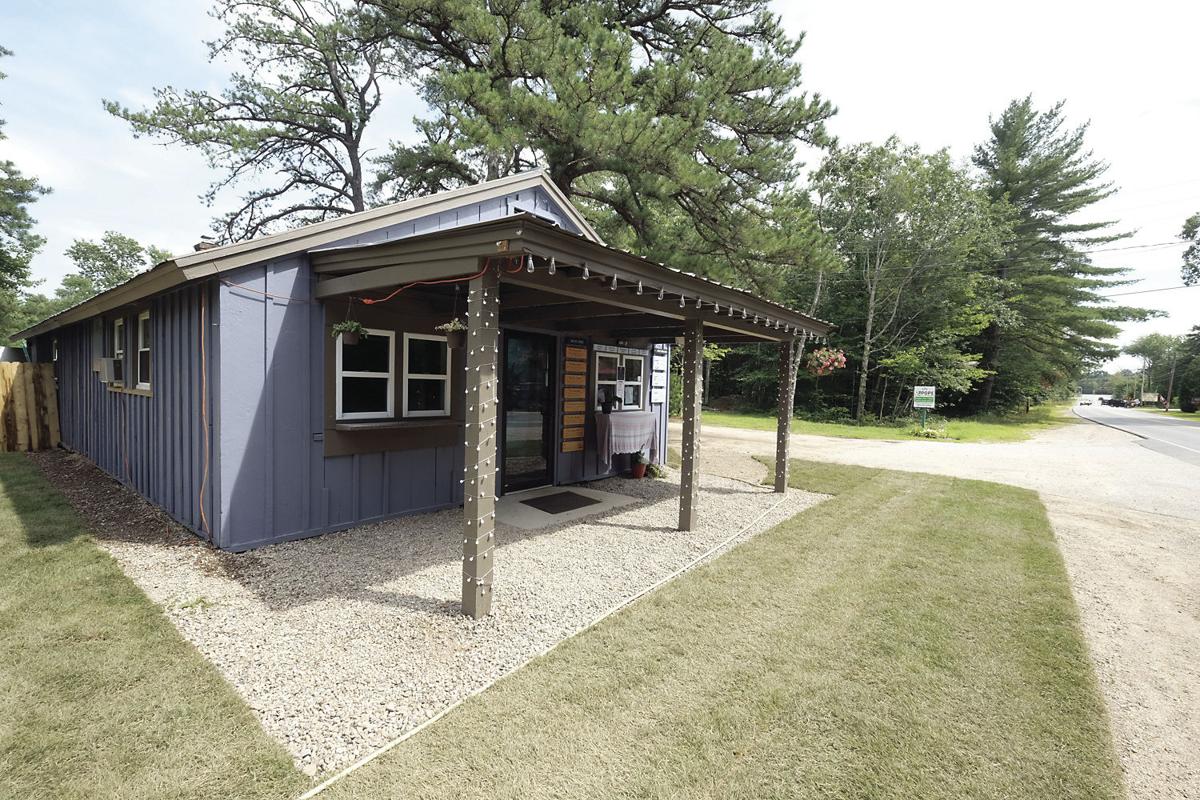 The Cheese Louise food truck’s new “bricks and mortar” location on the Kancamaugus highway in Conway opened before receiving the certificate of occupancy from the Town of Conway and was subsequently closed until the requirements were met. It remained closed on Thursday. (JAMIE GEMMITI PHOTO) 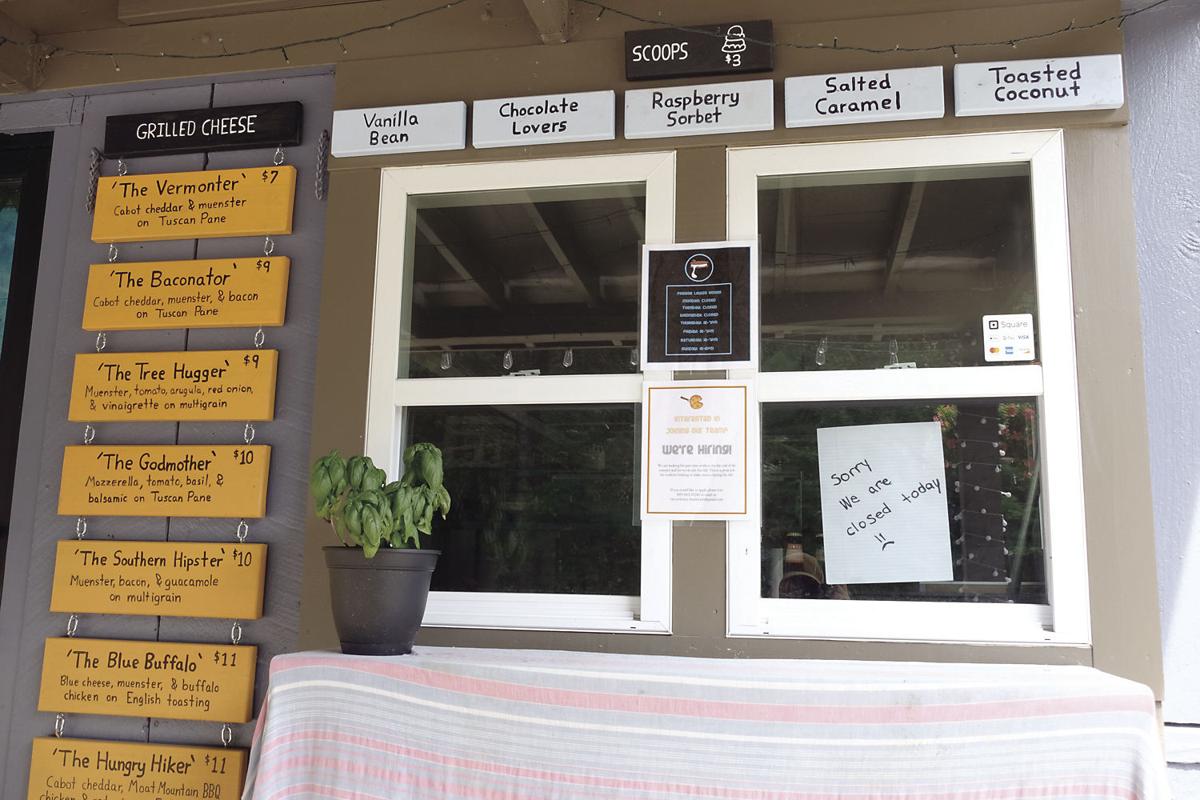 A screen shot of a rap video Cheese Louise made about their ongoing issues with Town of Conway shows owners James Gaudreault (left) and Bryce Harrison and employee Hannah Thelemarck. (COURTESY PHOTO)

The Cheese Louise food truck’s new “bricks and mortar” location on the Kancamaugus highway in Conway opened before receiving the certificate of occupancy from the Town of Conway and was subsequently closed until the requirements were met. It remained closed on Thursday. (JAMIE GEMMITI PHOTO)

CONWAY — Three twenty-somethings who own a food truck company are taking on the town over regulations they say are pushing their business away, and they are telling their tale with rap on social media.

Conway town officials, meanwhile, say there’s another side to the story.

For the past two summers, the Cheese Louise food truck has been a familiar sight in North Conway Village, attracting lines of hungry tourists at places like TD Bank, Pinkham Real Estate and Sun & Ski (formerly Joe Jones).

This year, the trio of young owners — James Gaudreault, 21; Bryce Harrison, 21; and Ian Lubkin, 20 — ran afoul of regulations and say they were forced to cease local sales in the waning days of the season.

Cheese Louise, which employs a dozen people, including the owners, operates two food trucks (one used just for special events) and a storefront/prep kitchen at 175 Kancamagus Highway (Route 112) in Conway.

Harrison said the first issue with the town was they were told to shut down the storefront mostly because they replaced rough grass and shrubs in front of the store with gravel in order to beatify the property.

“Did this small violation of green space warrant shutting down our operation for two weeks in August, our potentially busiest month of the year because we moved gravel on two feet of what should have been green space?” he asked rhetorically during an interview with the Sun.

On Thursday, Conway Town Manager Tom Holmes said the storefront issue, which included opening at the beginning of August without an occupancy permit, had been resolved.

He said a June inspection showed the Cheese Louise owners had done work within the state right of way without state permission, removed too much green space and expanded the driveway altering what had been approved on the previous site plan.

“On Aug. 15, upon returning from vacation, (Town Planner) Tom Irving noted that the violations had not been remedied and that the buffer area, rather than being restored, had been covered with gravel.”

“The building inspector and the fire chief will inspect the work done under their building permit and, assuming they discover no new issues, a certificate of occupancy can be issued,” Holmes told the Sun.

Harrison said Thursday that the shop would reopen on Saturday.

However, Cheese Louise also ran into roadblocks when it sought permission to park its truck at locations for longer than 14 days. Under town requirements they would have take more parking spaces than the bank would allow and ran afoul of a green space requirement at TD Bank. Food trucks need foot traffic, and Harrison said there are only about a few viable places to park in the village, and at two weeks per permit, they have run out of locations.

In frustration, they wrote a rap song about the town and posted it to their Facebook page. In less than 24 hours, it received 109 comments and over 200 emojis.

“We’ve got a handful of gravel that’s got you upset, these strict zoning laws are about as tough as they get,” raps employee Hannah Thelemarck.

Harrison chimes in: “Policies, policies, I can’t stand the bureaucracy. No more than two weeks at each private property. Pinkham, TD, White Birch, Sun and Ski — these are places we can no longer be.”

Also on Facebook, they put out a public plea for people to call the town hall to express support for their business.

Harrison told the Sun Wednesday that while their food truck had run out of viable spaces to park, a longer term permit for Sun & Ski was still pending that would cover them through Labor Day.

But when they sought other longer-term parking arrangements, they ran into zoning issues that would need planning board approval. “There are not enough days in good locations for us to be operational throughout the entire summer,” he said.

Cheese Louise plans to operate at the Fryeburg Fair at the end of September, and other private events have already been scheduled, but the town regulations are harming their day-to-day business, Harrison said.

At TD Bank, Harrison said, they wanted to be able to put out a table, too.

But “because they (customers) are standing on the lawn due to us being there, that violates the green space requirement,” said Harrison.

Holmes said Irving and Code Enforcement Officer Jim Yeager went out to review the site and determined that the request (at TD Bank) would require at least two parking spaces, “one for the cheese trailer and one for some picnic tables and the customers who would be standing outside getting served,” said Holmes.

“When they informed the bank manager of this, he declined to grant permission for the loss of the two spaces to his business. The town had no choice but deny their request as a result.

“The town has granted numerous temporary permits to this business since they opened. But all said permits must come with the permission of the land owner,” Holmes said.

Business is not supposed to be conducted in the green space, said Holmes.

The temporary event permit application says this: “Conway’s Zoning and Site Plan regulations do not allow merchandise, displays, trailers or other vending apparatus to be placed in the buffer and they may not be placed on designated ‘green-space.’ Any alterations or additions must be able to function safely within the approved configuration of the site. In other words, the Temporary Event may not create a potential traffic or parking issue and in most cases, must be located on the paved (parking) area of the lot.”

Holmes, in a phone interview, said the there were two types of approvals the food truck’s host could apply for. The temporary event permit lasts for 14 days. Or they could seek long-term approval from the planning board.

Under the short-term permit, the truck could take up any number of spaces but under the long-term permit, a host business would need to have an adequate number of parking spaces left over.

Holmes said that  a host property had a dumpster violation that they needed to take care of and the town has been reluctant to grant “extra stuff” until the host can clean up existing issues.

Cheese Louise hopes town officials can move quickly to allow them to continue operating; in the longer term, they hope to file petitioned warrant article to change town zoning to be more favorable to food trucks.

Holmes said there are other food trucks in the valley but Cheese Louise is the one that’s most ubiquitous in Conway.

One change they would like is a food truck permit that would allow them to park in town for 90-plus days.

Another change is they want the town to speed up their approval process.

“This week, I had a discussion with Tom Irving on how to make the permitting of food trucks easier, and then I took a phone call from a restaurant owner all kinds of upset about how there are no restrictions on where food trucks can be,” said Holmes. “So, there are two sides to every story.”

The Sun also tried to reach out to other food truck companies.

Trails End Ice Cream has a trailer, operated by Rob and Nancy Clark of Bartlett. They said they have not been impacted by the town regulations because they only bring the truck to special events, but they do see that Conway’s regulations would affect their ability to do more.

“We want to see things change for the better,” said Rob Clark.

This story has been amended to say Conway Town Manager Tom Holmes said it was the host property that had the dumpster  violation.