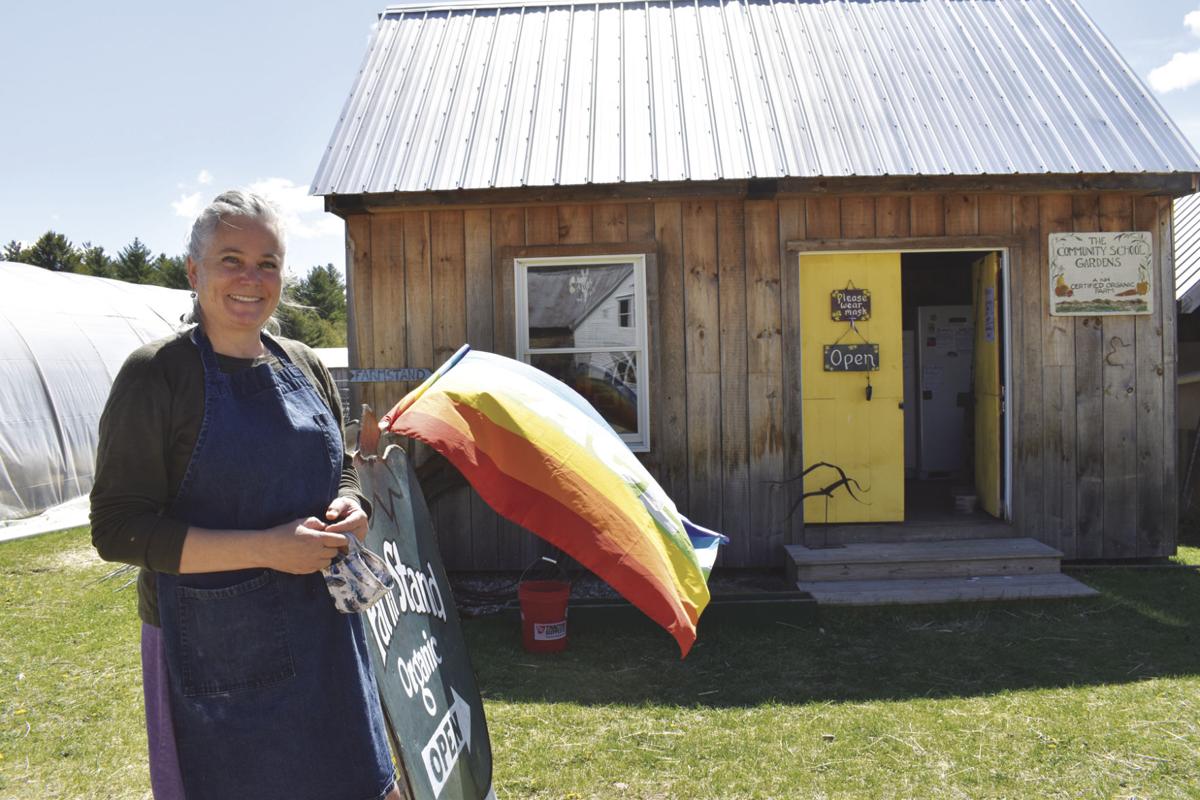 Community School Director Lianne Prentice has been cooking hundreds of meals available to the public for free at the school’s farmstand on Bunker Hill Road in South Tamworth. (DAYMOND STEER PHOTO) 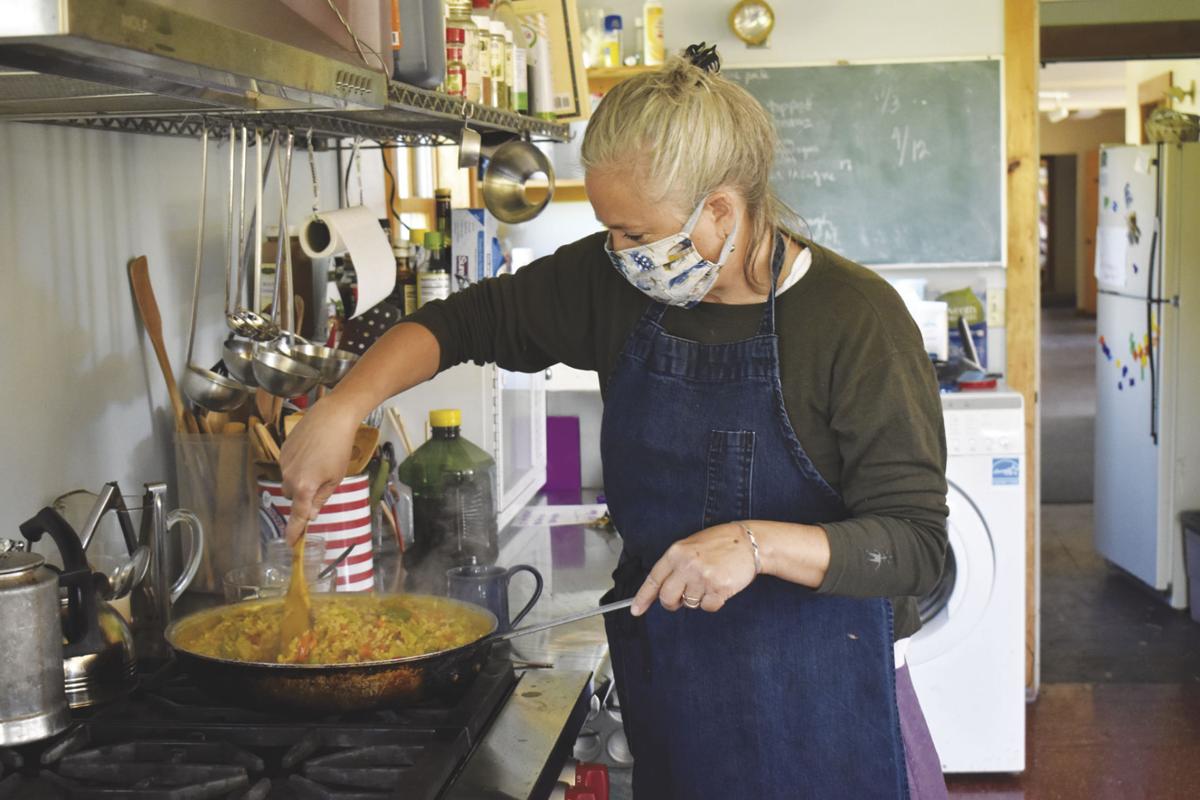 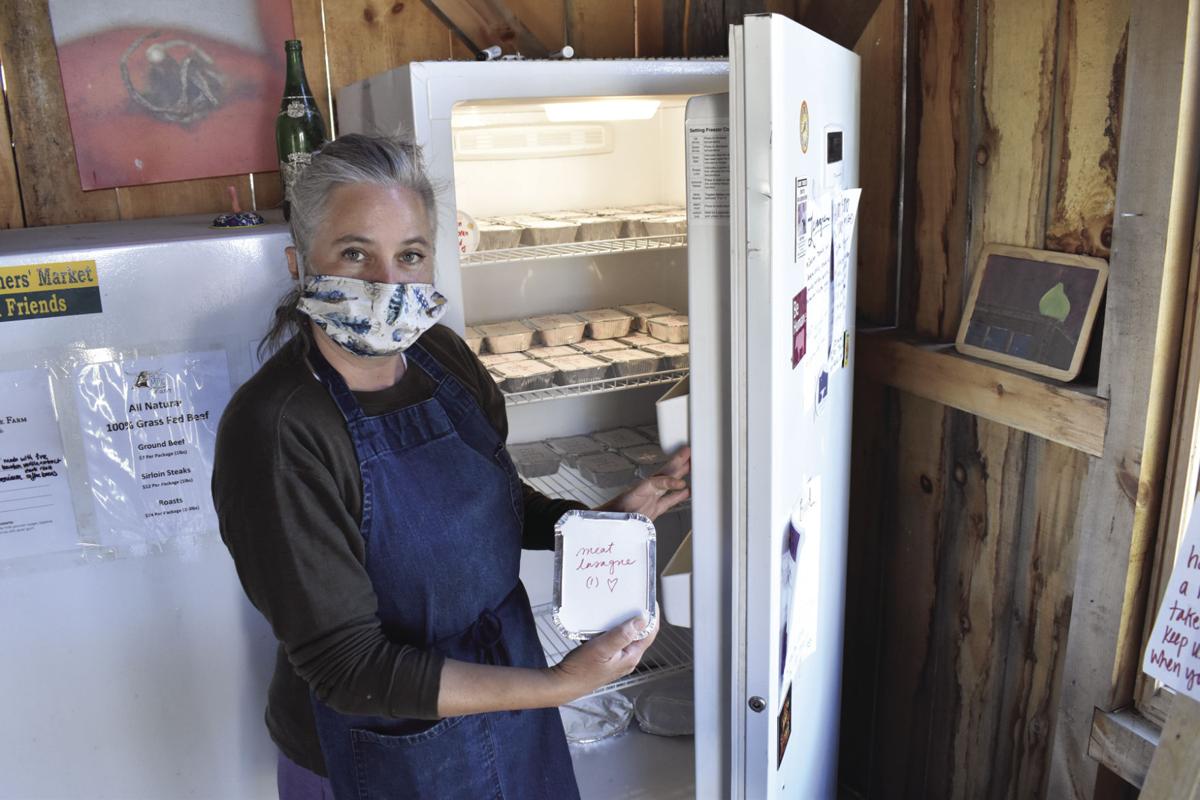 Lianne Prentice displays an example of a meal that is available for free at the Community School farm stand. While the meals are free, donations are appreciated. (DAYMOND STEER PHOTO)

Community School Director Lianne Prentice has been cooking hundreds of meals available to the public for free at the school’s farmstand on Bunker Hill Road in South Tamworth. (DAYMOND STEER PHOTO)

Lianne Prentice displays an example of a meal that is available for free at the Community School farm stand. While the meals are free, donations are appreciated. (DAYMOND STEER PHOTO)

TAMWORTH — Since the end of March, Tamworth Community School Director Lianne Prentice has been spending a lot of time in the kitchen.

With the South Tamworth school shut down due to the COVID-19 pandemic, Prentice has been cooking hundreds of meals each week and making them available for free through the school’s farmstand.

The Community School offers a non-traditional college preparatory program to students from sixth to 12th grade. It is located at 1164 Bunker Hill Road in South Tamworth, and the farm stand is across the street.

Since March 27, Prentice has been using the commercial kitchen to make 75-100 meals on a daily basis four to six days per week, which translates to about 2,200 meals made as of Tuesday.

In terms of menus, “I haven’t repeated yet,” Prentice, 54, of Tamworth said.

She said she tries to make both a vegetarian and meat meal. While interviewed this week, she was finishing up a “spring risotto” and said she would also make a barley-and-lamb version as well.

Much of the meat is raised locally. She said the beef comes from Zero-Mile Farm in Tamworth. The school owns some sheep, chickens, ducks and geese.

Other meals have included enchiladas, split pea soup and lasagna.

The food comes in foil pans that are stored in the freezer of the farm stand.

“I’m not trained as a cook. I’ve always like loved to cook, my grandmother’s a really good cook. I learned from her. And here in the past 15 years, we’ve done a lot of community meals.”

They used to have summer meals where 200 people would come.

Tamworth resident Ed Parsons said there used to be community luncheons on Thursdays. Tips were welcomed but not required.

Those Thursday meals ended about a year ago after a seven-year run, said Prentice.

“It was a liberal, educated crowd,” said Parsons. “The food was adventurous, not for everyone.”

For years, the school had fundraising dinners called “Slumgullions” that utilized students as chefs and servers and offered seven courses for $50.

Early on, a couple of people gave Prentice donations of a few hundred dollars, and that got her off the ground. Since then, the food has been paid for with donations placed in the farmstand’s cash box.

“Right now the system works,” said Prentice. “People who have more, pay more to cover it.”

Tax-deductible donations can also be made to the school, and if people want to write a check to pay for food, they should put “farm stand” in the memo, she said.

Many people who stop by to get a meal are from Sandwich as well as Tamworth.

“The philosophy of the school has been to nurture community,” said Prentice. “And so we’re really trying to take care of our own small community. And if every community could take care of itself and the people who need it, we’d all be in great shape. That said, if there’s somebody really desperate from Jackson who feels like this is the only way they can get food, then they should feel free to come down.”

She sees a lot of elderly people because going to the grocery store in the pandemic is scary for them. Some are dealing with serious illness or have family that are. Others are going stir-crazy and need to get out of the house, and they enjoy coming to the farm stand.

“Then there are people who just are either out of money or fast running out of money,” said Prentice. “In late March, early April, it was more of the elders. And now I’m seeing more of people coming because of financial reasons.”

This weekend the Community School is having a plant sale fundraiser where things like vegetable seedlings and gelato will be sold self-serve.

The Community School is in its 30th year and will be changing.

In the past it had been a day school which taught subjects in an “integrated way” as opposed to having blocks of time dedicated to subjects like math and science.

The school has always struggled financially. Now it is reinventing itself as a “semester school” where students grades 11, 12 or taking a gap year would come for a half year to do “intensive study” into themes like climate change.

In the past, students had hands-on environmental projects. They would make projects like a “bio-digester,” which captured methane from compost in order to heat a stove.

Such projects will continue in the school’s new format.

“So they’ll be building things like that bio-digester, and they’ll be working on their own plans, they can take these projects back to their own community and replicate them there,” said Prentice.

What’s more they will be adding two “off-the-grid cabins,” where about two dozen students would live. There would also be a tiny house for dorm parents.

The school sits on 340 acres, most of which is under conservation easement.

Then in future years, the Community School will also offer a modest amount of housing for seniors who like the outdoors and “intergenerational fellowship.” The details of the senior housing haven’t been fleshed out.

“We’re also working on building a tiny co-housing community where elders live here, people who want to be in their retirement years, around animals, around teenagers in a communal setting that’s focusing on social justice and climate change.”