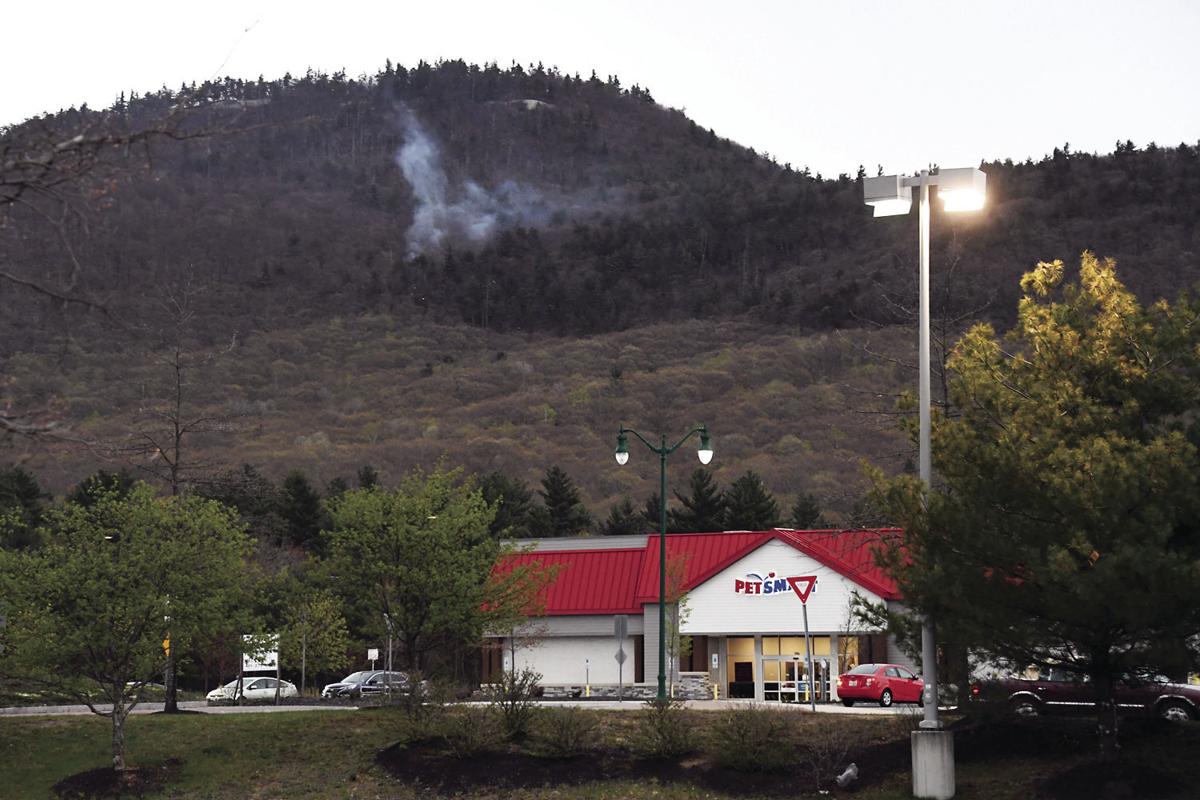 A woods fire is seen in the Green Hills Nature Preserve in North Conway on Monday night. A Maine man was charged with illegally starting it. (JAMIE GEMMITI PHOTO 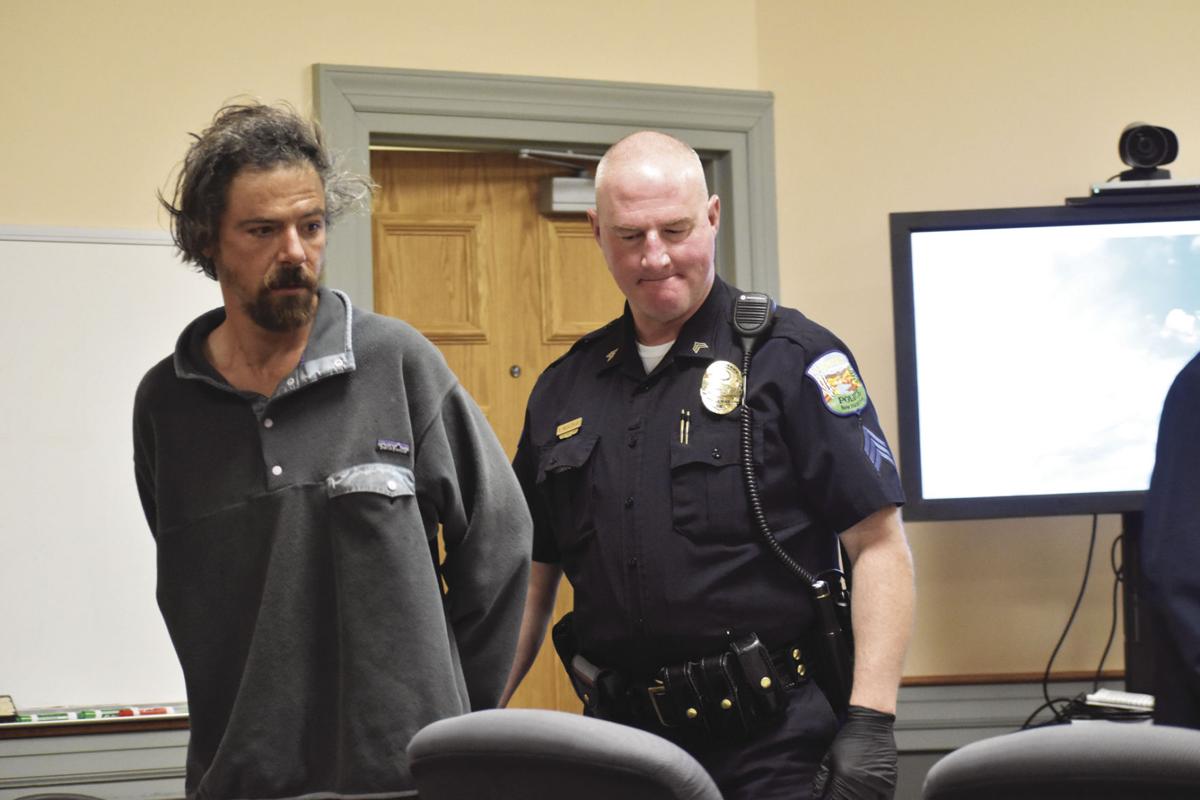 Richard Russo is escorted by Conway Police Sgt. Russell McLauchlan into Conway Circuit Court on Tuesday in connection with charges of an illegal fire and theft. (DAYMOND STEER PHOTO) 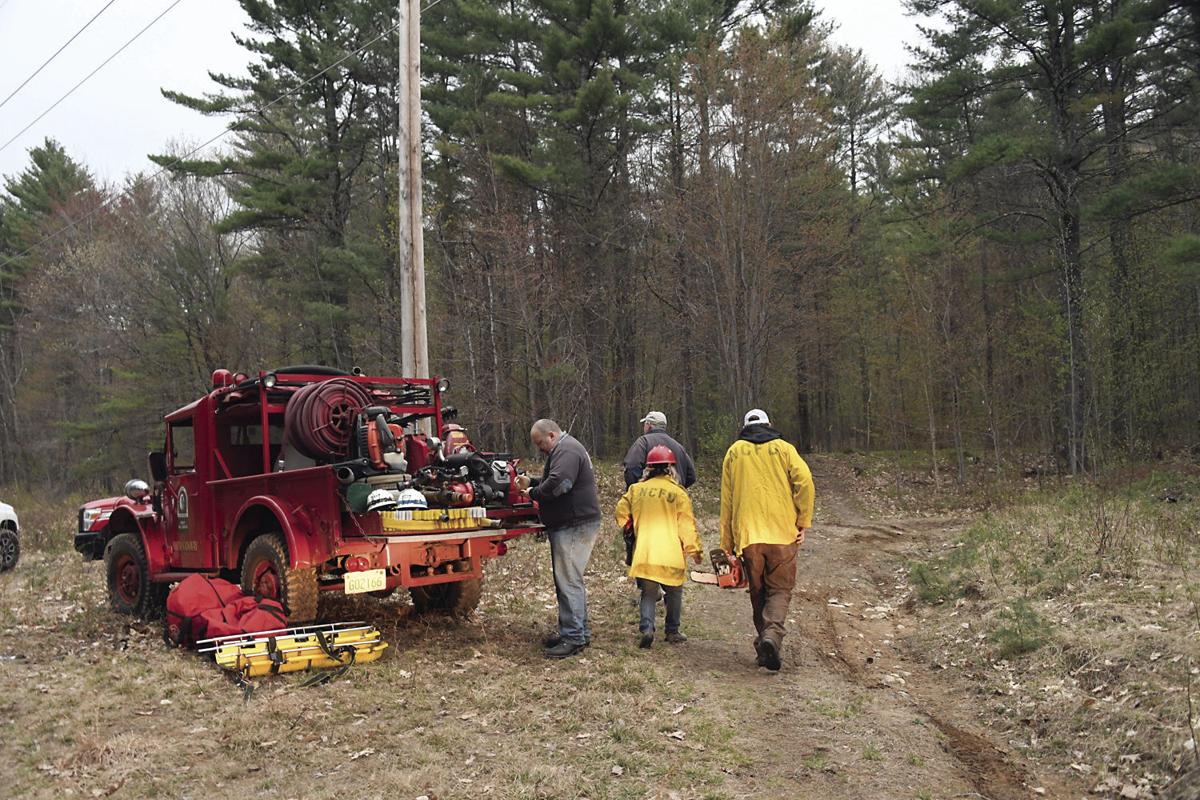 Firefighters are seen at the staging area of the woods fire in Green Hills Preserve in North Conway. (JAMIE GEMMITI PHOTO)

A woods fire is seen in the Green Hills Nature Preserve in North Conway on Monday night. A Maine man was charged with illegally starting it. (JAMIE GEMMITI PHOTO

Richard Russo is escorted by Conway Police Sgt. Russell McLauchlan into Conway Circuit Court on Tuesday in connection with charges of an illegal fire and theft. (DAYMOND STEER PHOTO)

Firefighters are seen at the staging area of the woods fire in Green Hills Preserve in North Conway. (JAMIE GEMMITI PHOTO)

CONWAY — A Conway circuit judge Tuesday held a man on preventative detention after he was arrested Monday night and charged with starting an illegal fire on Middle Mountain, as well as stealing from Walmart.

North Conway Fire Chief Pat Preece said the fire was reported at about 6:20 p.m. and that about 25 firefighters from four of Conway’s departments (aside from East Conway) responded.

Preece said the fire was on Rattlesnake Mountain, while police say it was on Middle Mountain. Both are adjacent to each other in the Green Hills Preserve, owned by the Nature Conservancy.

The firefighters staged at the corner of Redstone and Green Stone Street. They then walked up through the bike trail and woods to attack the blaze, using hand tools like rakes to put the fire out. Preece said the elevation was too steep for vehicles.

Camping and fires are not allowed in the Green Hills Preserve.

The fire was at 1,100 feet of elevation and was consuming underbrush but not trees. “Fortunately for us, it didn’t start any big timber on fire,” said Preece. “It was an open, free-burning fire. It wasn’t really roaring with big stuff at that point.”

About a third of an acre burned, state Division of Forests and Lands Forest Ranger Thomas Trask told the Sun outside of court.

While no one was injured by the fire, one person rolled an ankle during the effort but didn’t require treatment.

The fire is under investigation by Conway Police and New Hampshire Forest and Lands.

“We believe the fire started from a campfire that got away,” said Preece.

Russo sat silently during his arraignment, which was presided over by Judge Gerard Boyle. Russo didn’t say a word when Boyle asked if he wished to have an attorney appointed, hire a lawyer or represent himself.

Public defender Jason Novak, seated in the gallery, told Boyle Russo “indicated a desire not to be represented by the public defender’s office.”

Boyle appointed the public defender’s office to defend Russo anyway and said he would enter “not guilty” pleas on his behalf.

“The public defender’s office is the largest and most experienced criminal trial law firm in the state,” Boyle told Russo. “I would strongly encourage you to consult an attorney from that office before you decide what you want to do.”

Conway Police Sgt. William Strong asked for preventative detention, saying that “had the fire continued, it would have destroyed not only the forest there but the hiking and snowmobile trails.”

Strong suggested if Russo was released, he might go back and continue to start fires. “He has refused to give us any information about his name, his whereabouts, where he is from, where he may live, where he may get mail — or anything like that.”

“He has indicated to us he has no intention of speaking to any of us other than to communicate his displeasure with how he is being treated.”

Boyle said he would let Russo have another hearing on bail after he has consulted with an attorney.

The case against Russo is laid out in a warrantless arrest affidavit written by Strong, who received information about the case from responding officer Sgt. Dominic Torch.

According to Strong, as they were heading up to attack the fire, firefighters hiking to the scene saw a man with fresh burn holes in his Carhartt pants. The man’s face seemed to be covered in soot and ash.

“North Conway Fire Department Deputy Chief Tim Anderson, who is also a deputy N.H. fire warden, attempted to engage the male in conversation, asking if he had seen the fire,” wrote Strong. “The male responded by shouting obscenities at Anderson and challenging him to a fight.”

Russo made his way down a trail away from the scene, according to Strong, who added that Torch then “intercepted” Russo.

Torch said Russo asked, “Do you have a problem with me?”

He said Russo appeared to be aggressive and intoxicated.

Torch, who said Russo smelled like a campfire, placed Russo in handcuffs. During a search of his person, Torch found a lighter.

According to Strong, Russo was fingerprinted using the Automated Fingerprint Identification System. “An FBI hit came back to a Richard Alan Russo, although the male continued not to identify himself,” said Strong.

Boyle set a trial management conference for Russo on July 9 at 1 p.m. in Conway’s circuit court.