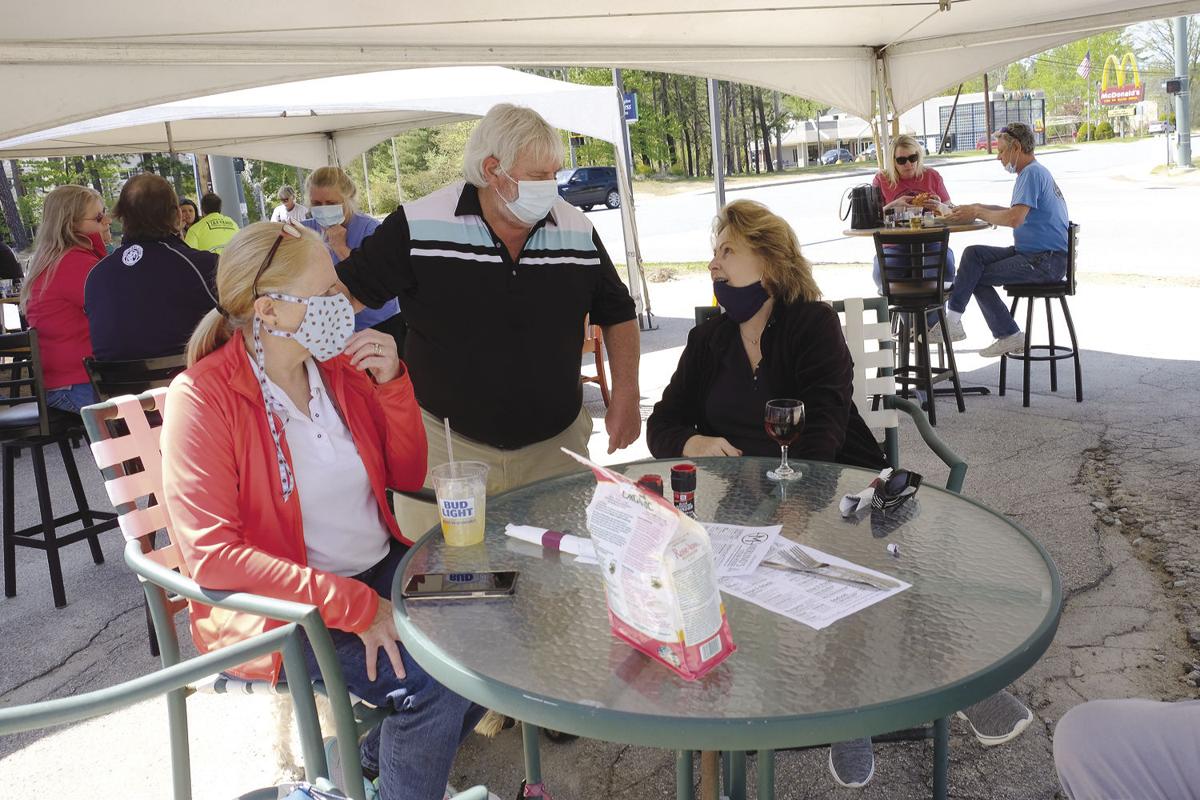 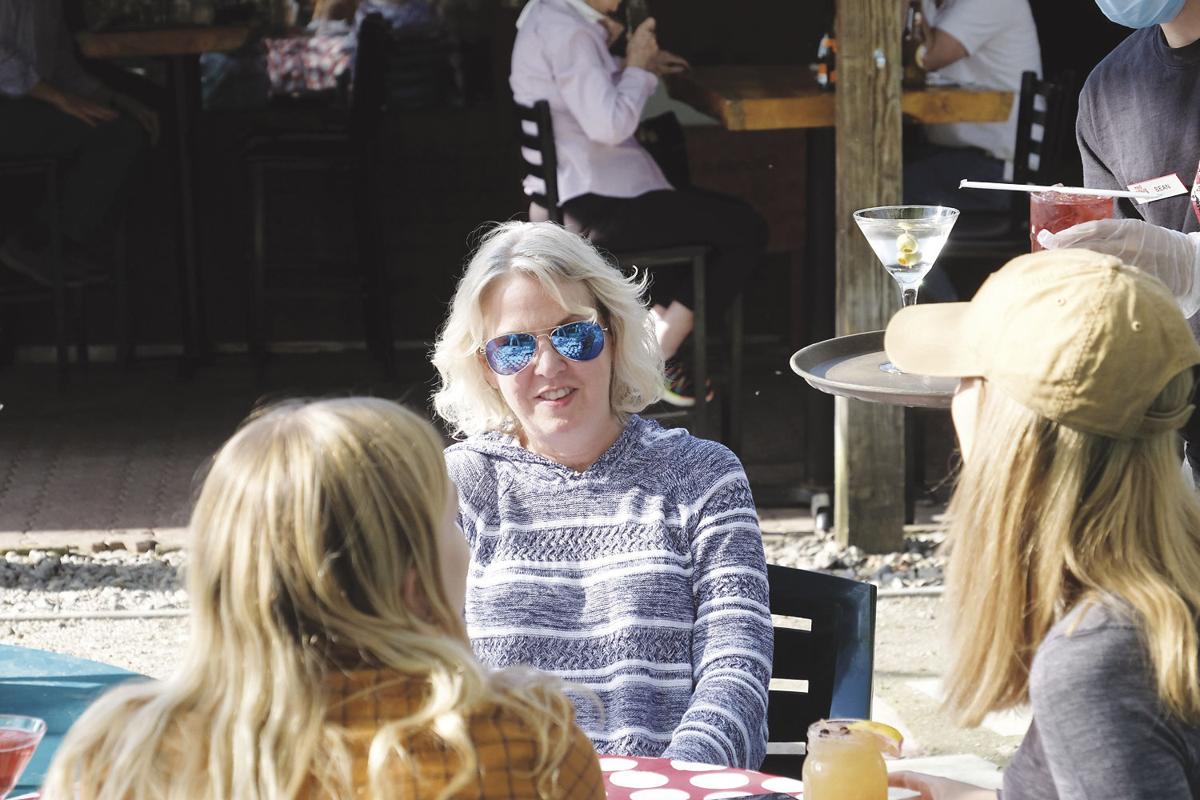 Mary Hennessey and her two daughters Kristin and Lauren and husband Gerry (not pictured) enjoy the nice weather on the patio for outside dining at the Red Parka Pub in the very first round of reservation Monday. (JAMIE GEMMITI PHOTO) 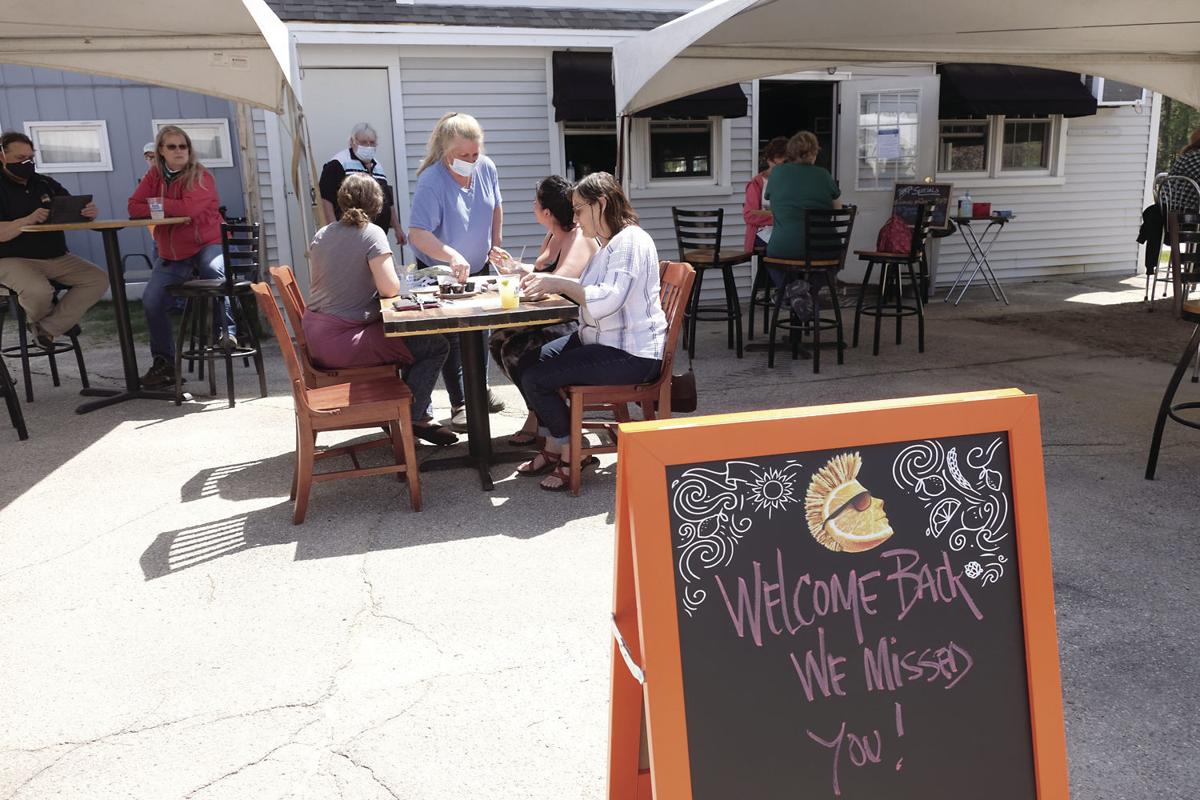 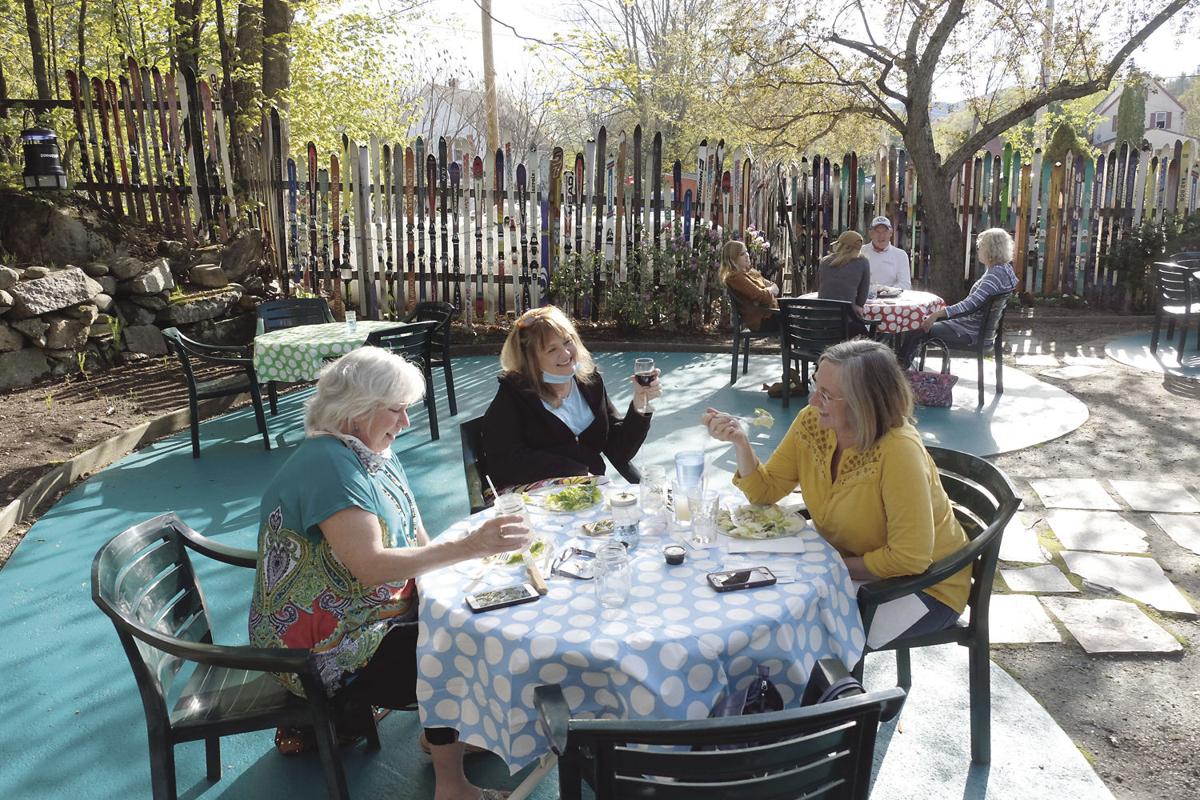 Bridget Reardon of Harts Location, Cindy Schwartz of Bartlett and Nancy Ray of Fryeburg, Maine (from left) were happy to be able to go out to eat at the Red Parka Pub in the very first round of reservations Monday. The three had salads because they’re “trying to be good after getting the “COVID 19” referring to the irreverent slang for weight gain during the stay-at-home orders. (JAMIE GEMMITI PHOTO)

Mary Hennessey and her two daughters Kristin and Lauren and husband Gerry (not pictured) enjoy the nice weather on the patio for outside dining at the Red Parka Pub in the very first round of reservation Monday. (JAMIE GEMMITI PHOTO)

Bridget Reardon of Harts Location, Cindy Schwartz of Bartlett and Nancy Ray of Fryeburg, Maine (from left) were happy to be able to go out to eat at the Red Parka Pub in the very first round of reservations Monday. The three had salads because they’re “trying to be good after getting the “COVID 19” referring to the irreverent slang for weight gain during the stay-at-home orders. (JAMIE GEMMITI PHOTO)

“I was a little nervous going into it yesterday, but it went great,” said Terry O’Brien, general manager/ co-owner of the Red Parka Steakhouse and Pub in Glen.

Under Gov. Chris Sununu’s new “Stay at Home 2.0” guidelines, restaurants, which had been limited to takeout and delivery, may serve food under an outdoor dining plan that limits seating to diners who have made reservations. Tables must be 6 feet apart, and no more than six people are allowed at a table.

Like other local restaurants that have reopened under the state guidelines, the Red Parka is now featuring outdoor service on its patio.

They have added heaters as well as bug zappers, said O’Brien, who is a past president of the New Hampshire Restaurant and Lodging Association whose father, the late Dewey Mark, co-founded the popular local restaurant with her mother Jean Melczarek and co-partners.

On Monday, the day was sunny, making for a nice dining environment, she noted.

The Red Parka patio is open 4-8 p.m. daily by reservation, as well as for takeout curbside service.

Taking reservations as required was a new experience for O’Brien.

“I learned a few new things, as we never used to take reservations before except in the very beginning of the restaurant (in the early 1970s). It is definitely a learning process for us all, but we’re getting there,” she said.

Like fellow members of the Valley Originals, the Red Parka staff has been well-trained in sanitation practices. All are wearing masks, under the state guidelines, and in keeping with that protocol, diners are asked to wear masks entering and leaving the restaurant as well as when they go to the restrooms.

However, “one customer came in and sort of rolled his eyes at me when I asked him to put on a mask,” said O’Brien, noting that she provided one for him.

She said lingering was not a problem, a concern she had going into the night as most diners met their request to not stay too long, since there is limited seating.

With Memorial Day Weekend coming up, that is likely to be more of an issue.

Nora Mulkern Bean, manager of the Shannon Door Pub in Jackson, said her family-owned restaurant has been doing curbside takeout since the March 17 shutdown.

As late as last Thursday, she and her parents were on the fence about doing outdoor dining but ultimately decided to have 12 outdoor tables and two on the front porch.

They had only three parties the first night but are expecting it to pick up.

“We didn’t really advertise our opening on Monday, so it was a bit of a trial run,” said Bean on Tuesday. Her family establishment is open daily, 4-8 p.m., with service on the patio from 4-7 p.m., weather permitting.

“Between Merlino’s, which goes back 50 years, the Red Parka, which started in 1972, and the Shannon Door, which is 63 years old, it was interesting to see that the valley’s three oldest restaurants with 164 years of experience opened for the outdoor dining Monday,” said Bean, daughter of Tess and Tommy Mulkern.

Rick Luciano of Merlino’s Family Steak House, said his outdoor dining has been enhanced with a 20-by-40-foot rental tent from Wrobleski Party Rentals. It can seat about 40 customers in accordance with the state guidelines.

“For the (Memorial Day) weekend, we are getting a lot of calls for reservations, so we are expecting to be very busy,” said Luciano, whose family-owned restaurant is open daily.

John Eastman, Conway Recreation director, who is in charge of issuing outdoor dining permits for the town, said as of Monday, his office had issued 12 permits to local establishments and that another four were pending.

Among the permits that are pending is one for Bagels Plus, which is hosting a benefit (donating proceeds) for Jen’s Friends on Friday.

Eastman was to give an update on permits to selectmen at their weekly meeting at 4 p.m. Tuesday.

Also open for outdoor (as well as indoor) dining are restaurants just over the border in Maine. Oxford County, home to Fryeburg, is allowed by Gov. Janet Mills to open its dining rooms, with the customary restrictions of distancing and masks.

Sandra Iacozili at 302 West Smokehouse & Tavern in Fryeburg, said customers have been enjoying takeout at their deck and their Back 9 picnic table area, with plans to begin indoor service Thursday.

“People are just so happy to be outside, enjoying a view other than the four walls they have been staring at at home these past months or so,” said Iacozili.

George Washington and his army won our freedoms by crossing frozen rivers in the dead of night on Christmas to cut the throats of the British in their sleep. Literally cut their throats in their sleep.

We just gave all those freedoms up - let our government shut down our lives against our will and best interests, because we were scared to catch the flu.

I'll pass. No way am I wearing a mask outdoors.

Sheeple, they've got you all conditioned now.

Go ahead and do your own thing!! Evolution at work, I think