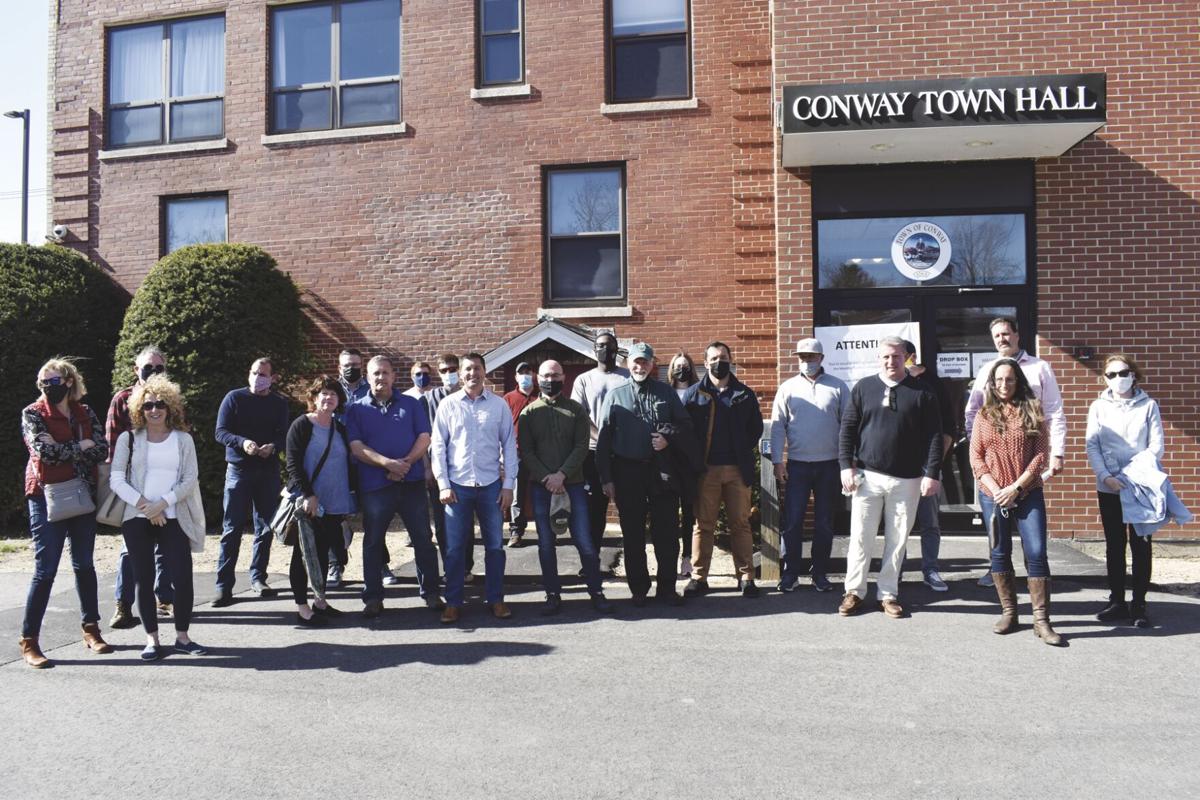 About two dozen people who support short-term renting in Conway pose for a photo outside Conway Town Hall on Tuesday afternoon before the selectmen's meeting. Only nine were allowed to speak. (DAYMOND STEER PHOTO) 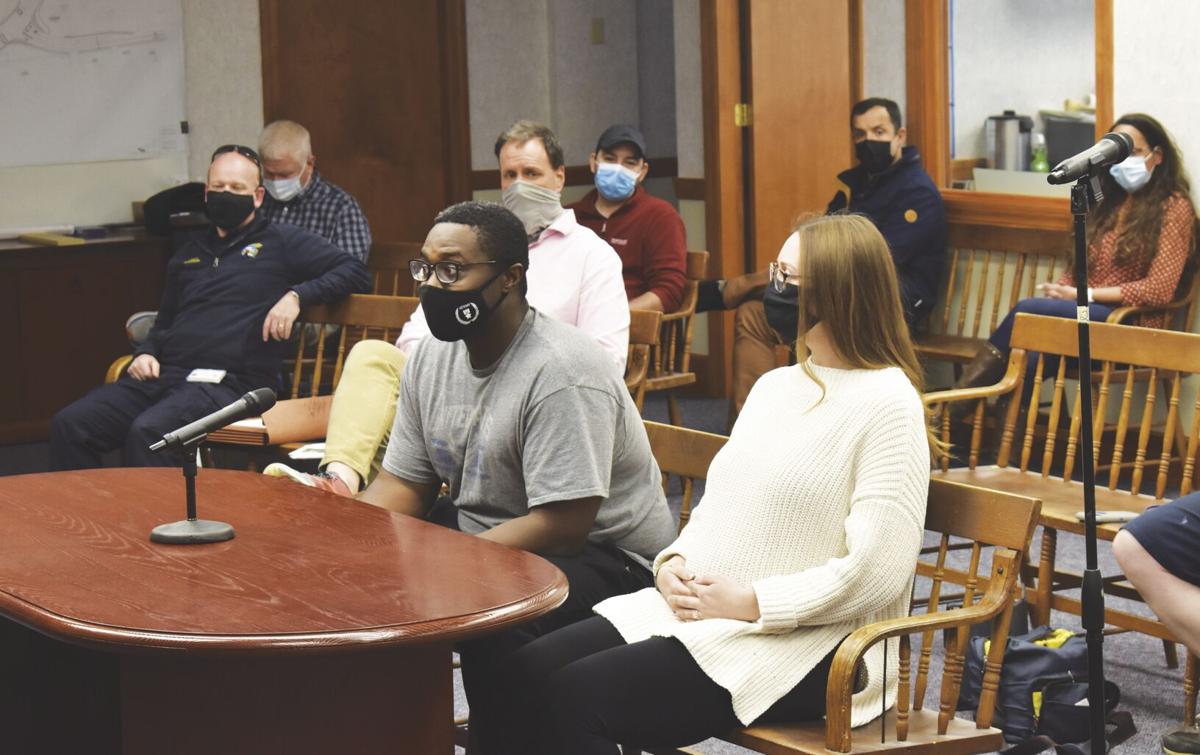 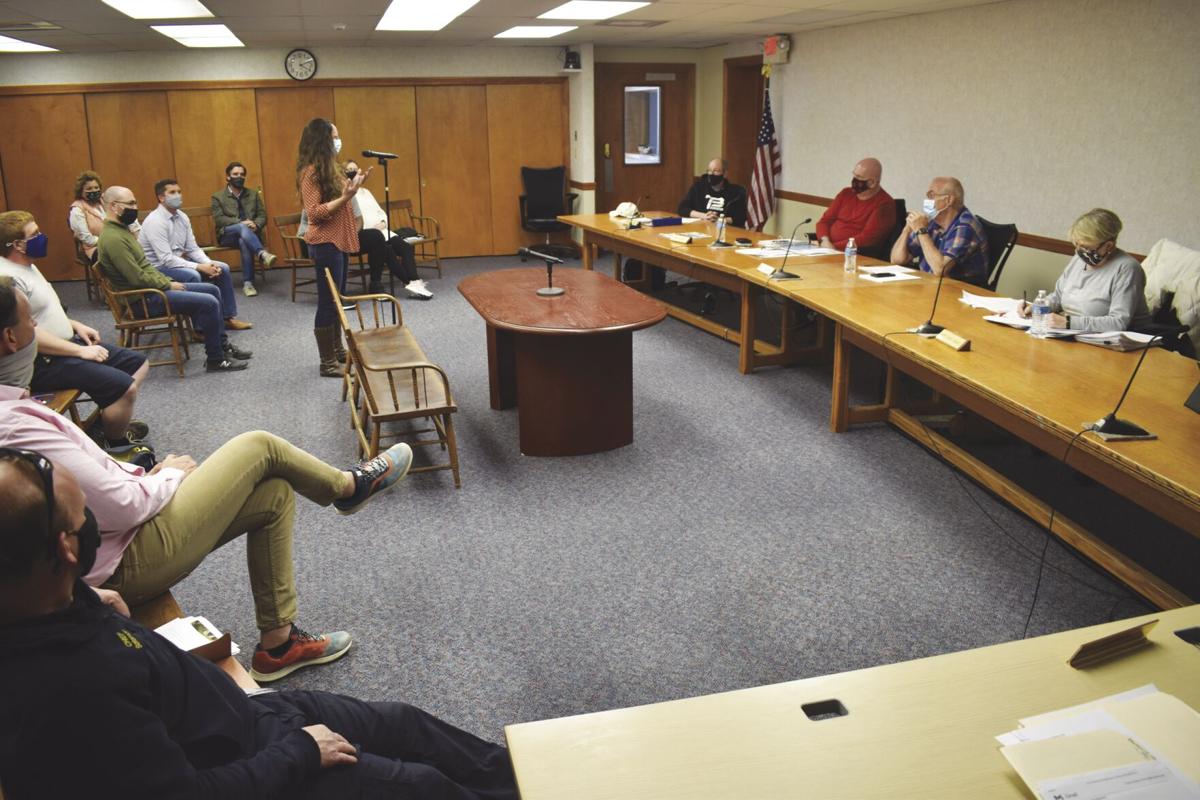 Analee A. Berretto tells Conway selectmen Tuesday she hopes short-term rentals can be regulated and not banned. (DAYMOND STEER PHOTO)

About two dozen people who support short-term renting in Conway pose for a photo outside Conway Town Hall on Tuesday afternoon before the selectmen's meeting. Only nine were allowed to speak. (DAYMOND STEER PHOTO)

Analee A. Berretto tells Conway selectmen Tuesday she hopes short-term rentals can be regulated and not banned. (DAYMOND STEER PHOTO)

CONWAY — In the 15 minutes allotted them, nine short-term rental supporters went before selectmen Tuesday to ask them to find a way to allow such rentals to continue.

Several ordinances seeking to allow the rentals failed at the town polls on April 13. Currently, there are about 500 short-term rental properties in town.

A large group arrived at Conway Town Hall on Tuesday at 4 p.m. to see if they could give public comment on the topic. Police Chief Chris Mattei, who was monitoring the door, said the gallery limit of 18 was reached and about 10 people didn’t get in.

The saga caught WMUR-Channel 9’s attention, which aired a story about the meeting, most of it based on Valley Vision footage.

First to speak at the meeting were Rich and Kimberly Brown of Massachusetts. Rich Brown said he finds the valley to be a place he can relax.

“We love coming up here so much we bought a place,” he said. “We spent a lot of money to make it nice. We also made sure that people who stay with us and follow the rules.”

Kimberly Brown said her parents have owned two condos in town her entire life and she has been coming to Conway since the 1980s.

“Now, we are expecting a child and we have dreams of being able to continue to come up here and raise our children,” she said. “This is why we would love to support short-term rental usage here.”

Analee A. Berretto, who said she drove from Bristol, R.I. to attend the meeting. “I’m not for overregulation, but regulation can protect our neighbors just as much as it can protect the valley and protect the businesses that we support,” she said.

Rafael Barbosa introduced himself as a new North Conway property owner who is a professional short-term rental host who operates about 100 units in the Boston area. He serves 4,000 guests on an annual basis. He said the town should have tried regulating short-term rentals before banning them.

“If you were to check within all of the ordinances in all the cities that we currently operate, you’ll see that my company, Maverick Suites, has no complaints against noise,” said Barbosa. “We’ve never had the police called; we don’t have parties.”

Jay Burnham of Hamilton, Mass.,said he was speaking on behalf of the 52-member Stonehurst Village Condominium Association, which he said opposes the ban.

“We feel that at best, the language in the ordinance was misunderstood and at worst was retaliatory against a very ... small number of short-term rental owners,” said Burnham.

Not everyone was supportive of short-term rentals. Day read aloud a comment from Steve Bamsey of Conway, who said, “Short-term rentals are businesses that should be restricted to commercial districts.”

At the end of the 15 minutes, selectmen’s chair Dave Weathers told the group: “We will be having the executive session at the end of the meeting today with the town counsel to further discuss this and see which route we’re going to go. If you want to stay for the rest of the meeting, I guarantee it’s going to be dry, but you are more than welcome to stay.”

TeleTalk question: Do you agree with the selectmen’s decision to immediately shut down all short-term rentals?