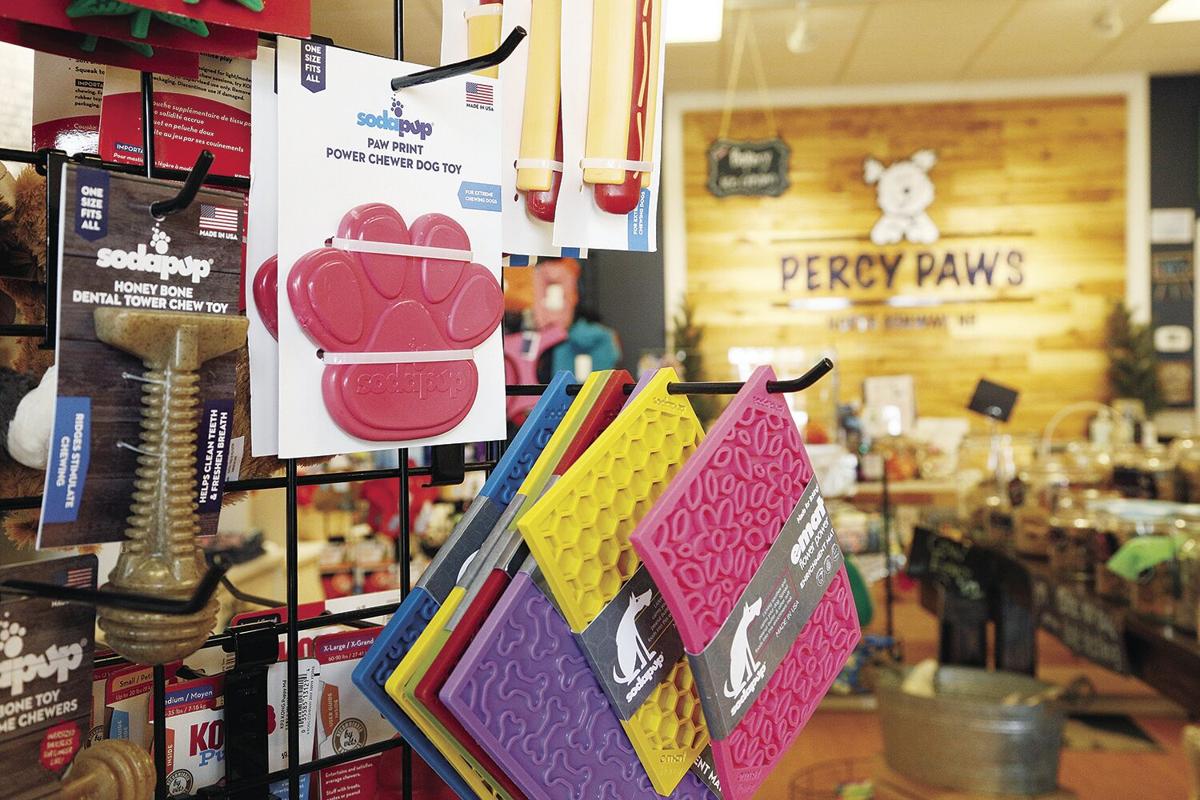 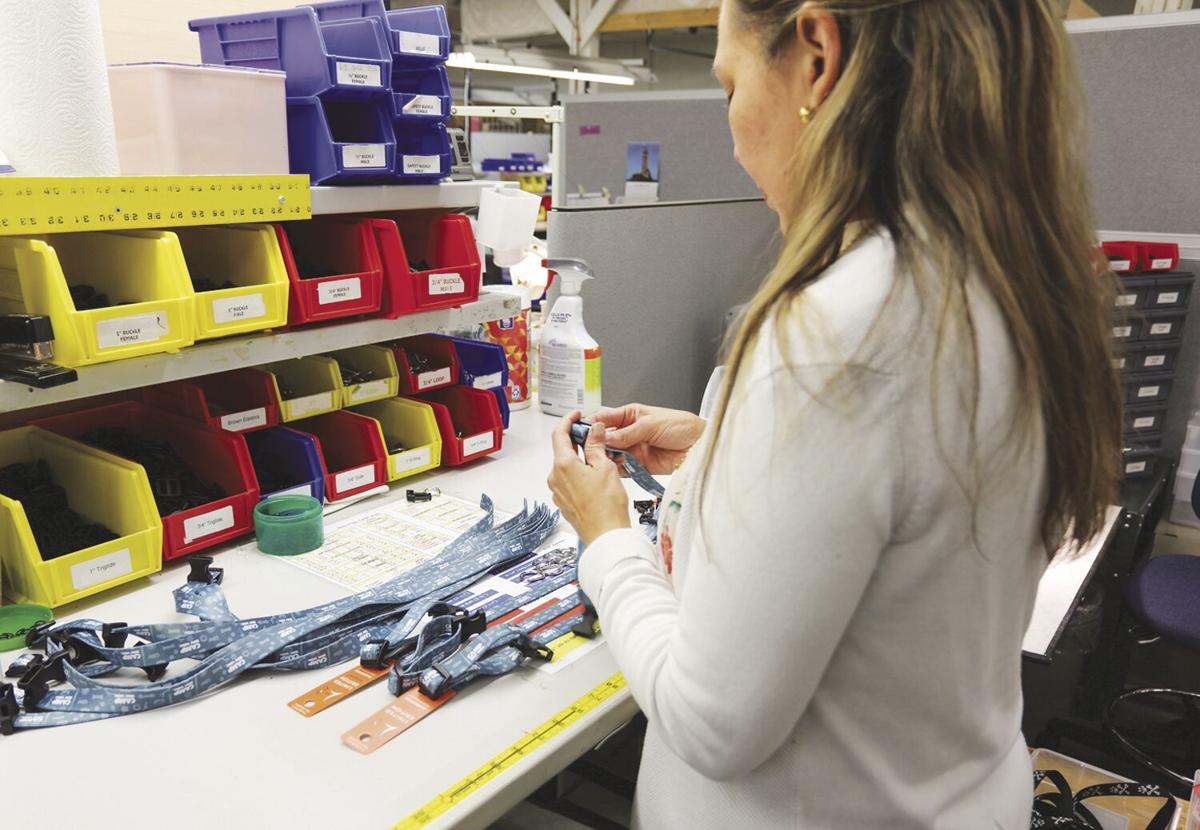 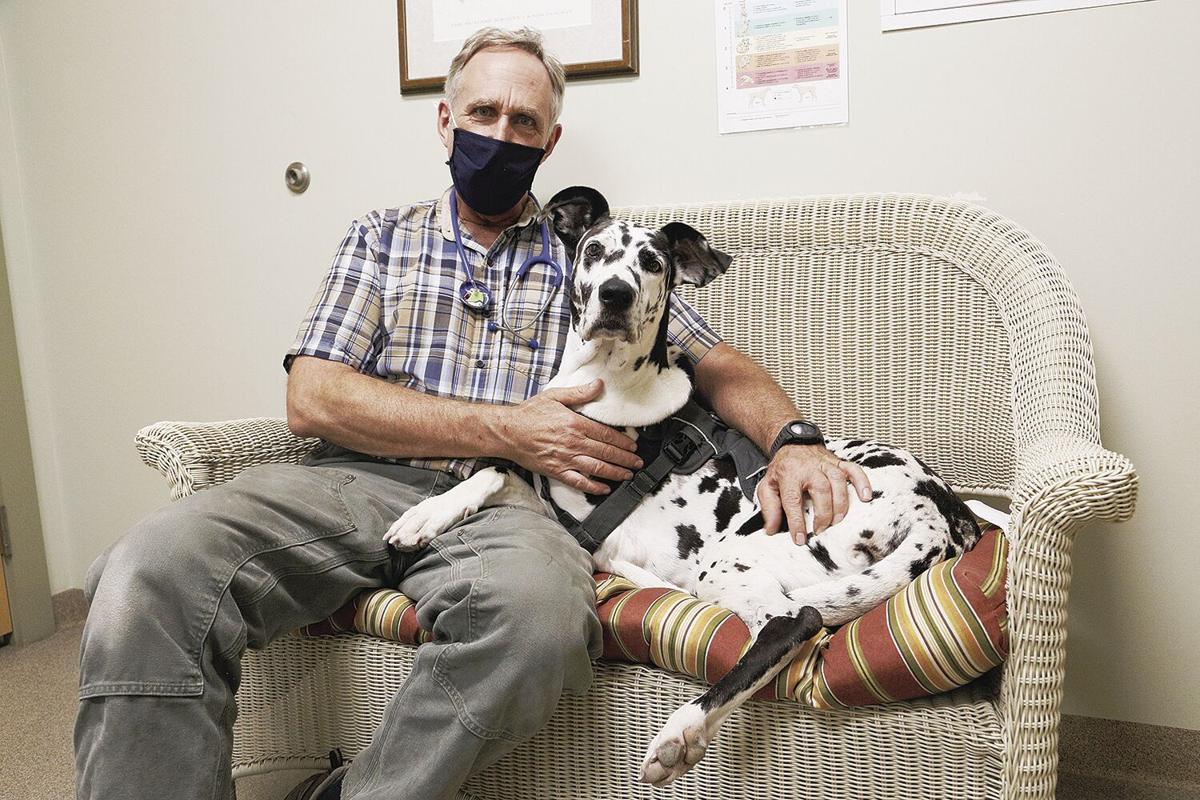 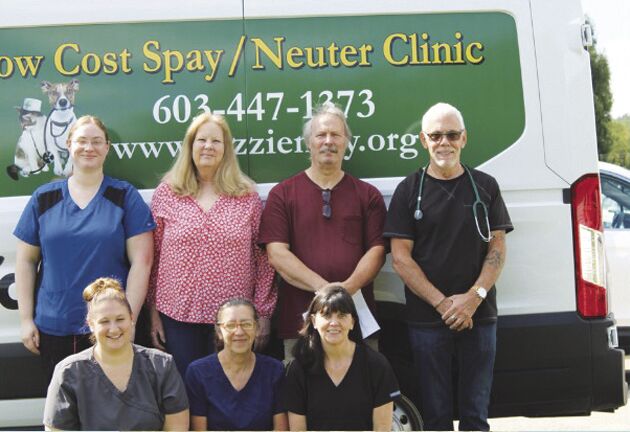 CONWAY — It’s estimated that the U.S. pet industry grew from $97.5 billion in 2019 to $99 billion in 2020, and the pandemic obviously played a big role in that more people were adopting pets.

That’s an astounding $1.5 billion growth in one year.

It was a year that saw pet owners splurging on everything from pet food and treats to pet sitters, toys and travel, according to PetPedia.

That trend included Conway as well.

“I think with people not traveling far away and coming here regionally, they are bringing their pets with them,” said Steve Iannuzzi, owner of Percy Paws LLC, a shop selling pet accessories and gifts in Settlers Green, the North Conway outlet mall.

Iannuzzi, who opened the shop three years ago, said because he doesn’t sell pet food, the business was deemed “non-essential” by the state and had to close for three months at the start of the pandemic.

“It was pretty tough, and we didn’t know if we would come out of it,” said Iannuzzi this week. “But we’re thankful we did and that we’re still here.”

He said summer 2020 was “OK, considering we were coming out of a shutdown.” When a return to normalcy occurred when the COVID-19 vaccines became available, business took off — and has continued to rise.

“This year has really been good, better than expected,” he said, explaining that with many staying at home to work remotely during the pandemic, people decided now was the time to get a dog.

“So, that was a big part of it — and we have seen many first-time dog owners who come in to our store and tell us their stories,” Iannuzzi said.

“Another aspect is this is our third year and they now know where we are here at Settlers Green,” he added.

Meanwhile, Kathy and Brian Ahearn, co-owners of Four Your Paws Only, the independent pet store and bakery in North Conway, recently celebrated their 27th year in business.

Their store does sell pet food and they said it was tough keeping up with the demand.

“When we reopened in May 2020 to in-store shopping, we were busier than ever,” said Brian. “We are now back to semi-normal and doing very well, and we are fortunate to have a full staff of 12 full-time employees and one part-time employee.”

They implemented curbside delivery during the shutdown, and although they had to discontinue some events like puppy playgroups, Brian says they want to restart that socialization fun-time soon.

He said some dog owners have been asking for that service to return because many animals, like their owners, were forced to stay home for much of the pandemic and began losing their socialization skills and forgetting how to behave around other dogs and humans.

“And now that people are going back to work (in person), their dogs do have separation anxiety over being home alone,” said Kathy. “People have been asking a lot about the puppy play group again and we hope to start it up again soon.”

As ardent animal lovers, they were pleased to see people helping local animal shelters such as Harvest Hills and Conway Area Humane Society by adopting pets and giving them homes.

“People figured that being home during the quarantine was the perfect time to adopt a pet — and they used the shelters, which was great,” said Brian.

Scott Badger, co-founder/co-owner of LupinePet, an East Conway business that manufactures pet collars and other products, said that after the shutdown, when most staffers were furloughed, things are now humming as they try and meet the demand.

Once they were able to bring back their employees, business started to pick up, and now it has doubled and sometimes even nearly tripled from their normal website orders.

“You’ve probably read how many retailers are saying the pandemic in general has pushed things forward about 10 years in terms of purchasing products online?” said Badger.

“The first reason: Because they had to. And the second: They had to be home and they were bored, so why not shop online?”

“After months of peril, yes, starting in May last year, there were huge increases in sales for me, and I do attribute that to more people getting dogs and puppies from shelters and breeders,” Twombly said.

“January of this year was a record for me in terms of monthly sales,” said Twombly.

Animal medical care also saw demand increase as more people got pets. Local veterinarian services had to adapt to how they served their patients, allowing clients to drop pets off at curbside, from where clinical staff would bring them inside for care.

Eileen Lippe of Bartlett, president of the Rozzie May Animal Alliance, says her non-profit spay/neutering clinic had just opened at its then-new location on Hobbs Street in Conway Village when the COVID-19 pandemic hit.

Following a 10-week shutdown, they were able to reopen with new protocols to keep everyone safe.

“The biggest challenge for us has been missed opportunities for fundraising, as we rely totally on the community,” she said, noting she and her board and staff were grateful for the benefit concert given the alliance by Sandwich performer John Davidson at the start of his summer season.

“He was wonderful to us — he has a shelter dog himself so he became very interested in our work,” said Lippe.

She added that the non-profit recently reached a new milestone. “Last month, since our inception in 2007, we reached a mark of 22,000 neutered and spayed animals so we are very proud of that.”

Dr. Steve Caffrey of Fryeburg Veterinary Hospital said because they were forced to space out their appointments during the height of the pandemic, there was some slack, but people are making up for that now.

“People are getting caught up with their appointments, plus with the increase in adoptions, it has been bus,” Caffrey said.

“We had stopped wearing masks but now we are back to wearing them (due to the Delta variant cases of the coronavirus),” said Caffrey, adding, “We are also still willing to do curbside service where people drop off their animals and wait outside.”

Dr. Sheri Cassell of Conway Veterinary Care said the increased demand is a combination of all the new pet owners as well as a lot of new people in the valley.

She said things have gotten so busy that her office has had to stop taking new patients.

“We changed our schedule so we could see more patients but we still struggle to meet the demand. I would remind people to be kind and understanding as are working very, very hard to try and meet the demand,” said Cassell, who bought the practice in 2006 and moved it into its new quarters in the former Journey Church when the church built a new place of worship nearby in 2018.

Similar comments were made by Sarah Burke of True North Veterinary Hospital in Bartlett and by Deb Brown for North Country Animal Hospital in North Conway: with more pets adopted, and with new people relocating to the valley with their pets, the demand has been nonstop.

With more pets, there also has been more demand for grooming and doggy day care, as well as for dog sitters.

“We’ve definitely seen an increase, especially now that people are returning to work in person,” said Vickie Beaudoin, a receptionist for Karla’s Pet Rendezvous in Conway.

“Those who got their dogs during the shutdown go, ‘Wait, now the dog is at home alone.’ So they bring them in for doggy day care,” she said.

Added Kaci Kiesman of Auntie Cindy’s Albany Pet Care Center, LLC, “We’ve absolutely seen an increase for services. That has also been true for our day care and boarding.”

Tracy Fay of Ultimutt Cut Pet Salon of Redstone also has been straight out in the grooming business.

And Susie Hall Kennett of North Conway reports that she and other dog sitters have been much in demand, too. “I’m straight out,” she said.

Efforts to reach PetSmart and Petco for comment were not successful due to the store policy requiring corporate approval for employee interviews.

FRYEBURG, Maine — During the start of the pandemic, Harvest Hills Animal Shelter adopted a new way to adopt pets by requiring all would-be ado…