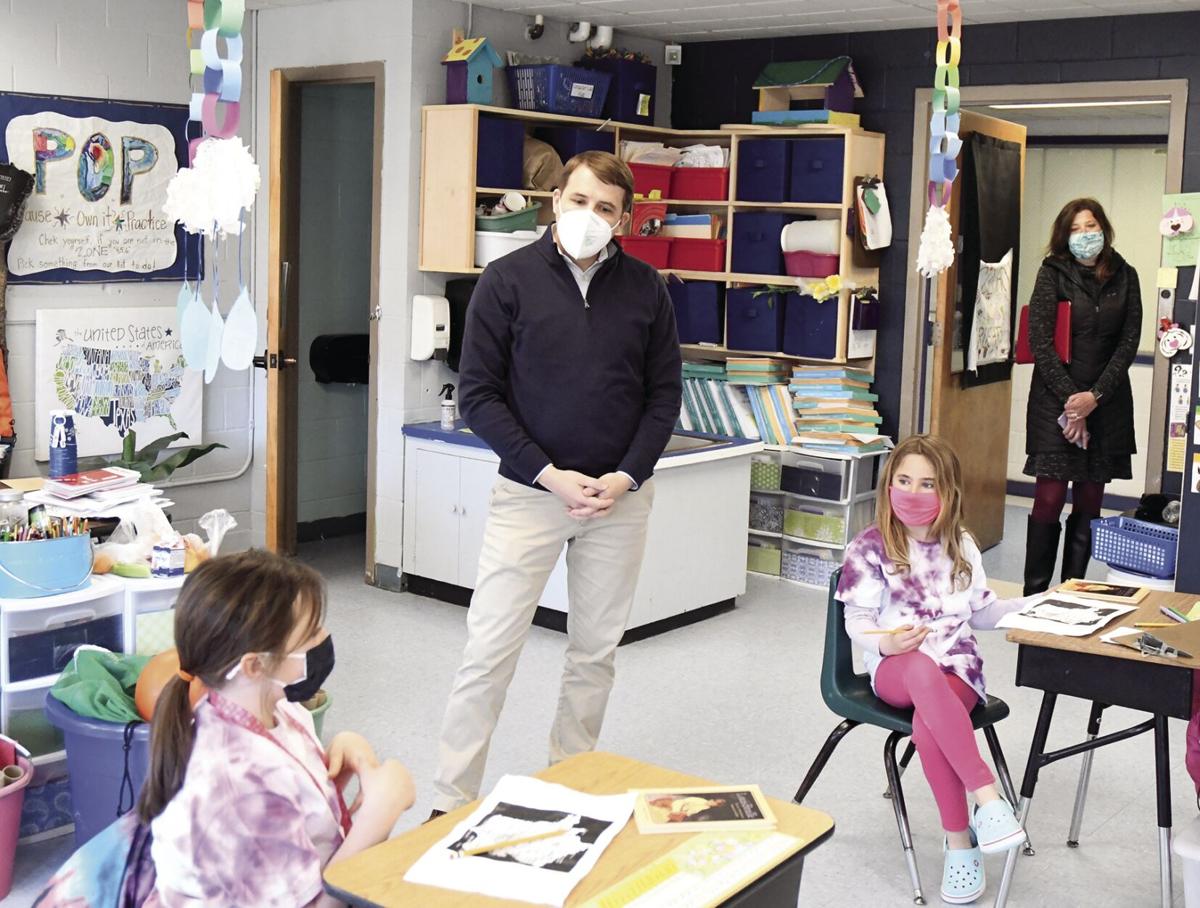 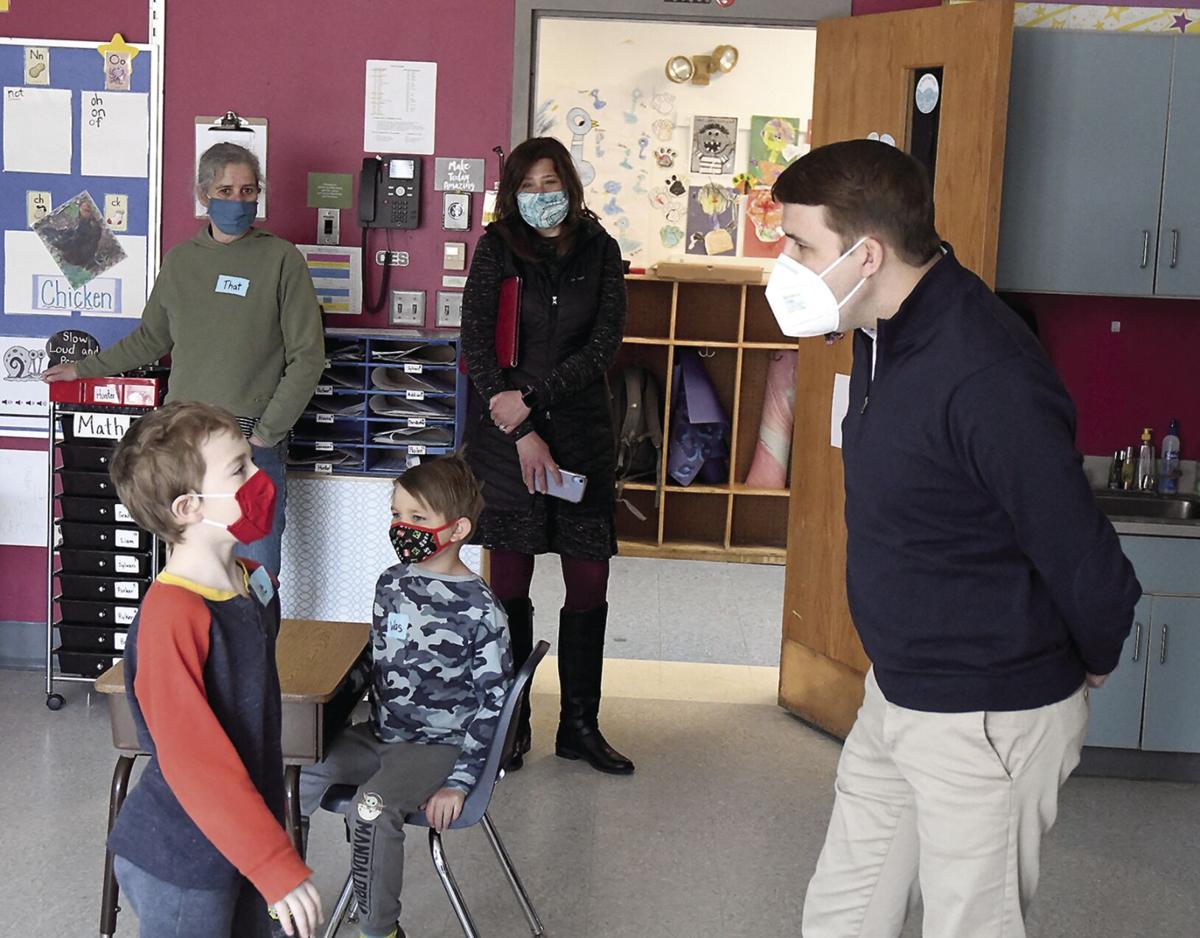 Superintendent Kevin Richard (right) explains to Rep Chris Pappas (D-N.H.) and his local liaison Victoria Laracy how the district has used federal funds during the COVID-19 pandemic the past year at the Professional Development Center at SAU 9 on Friday. (LLOYD JONES PHOTO) 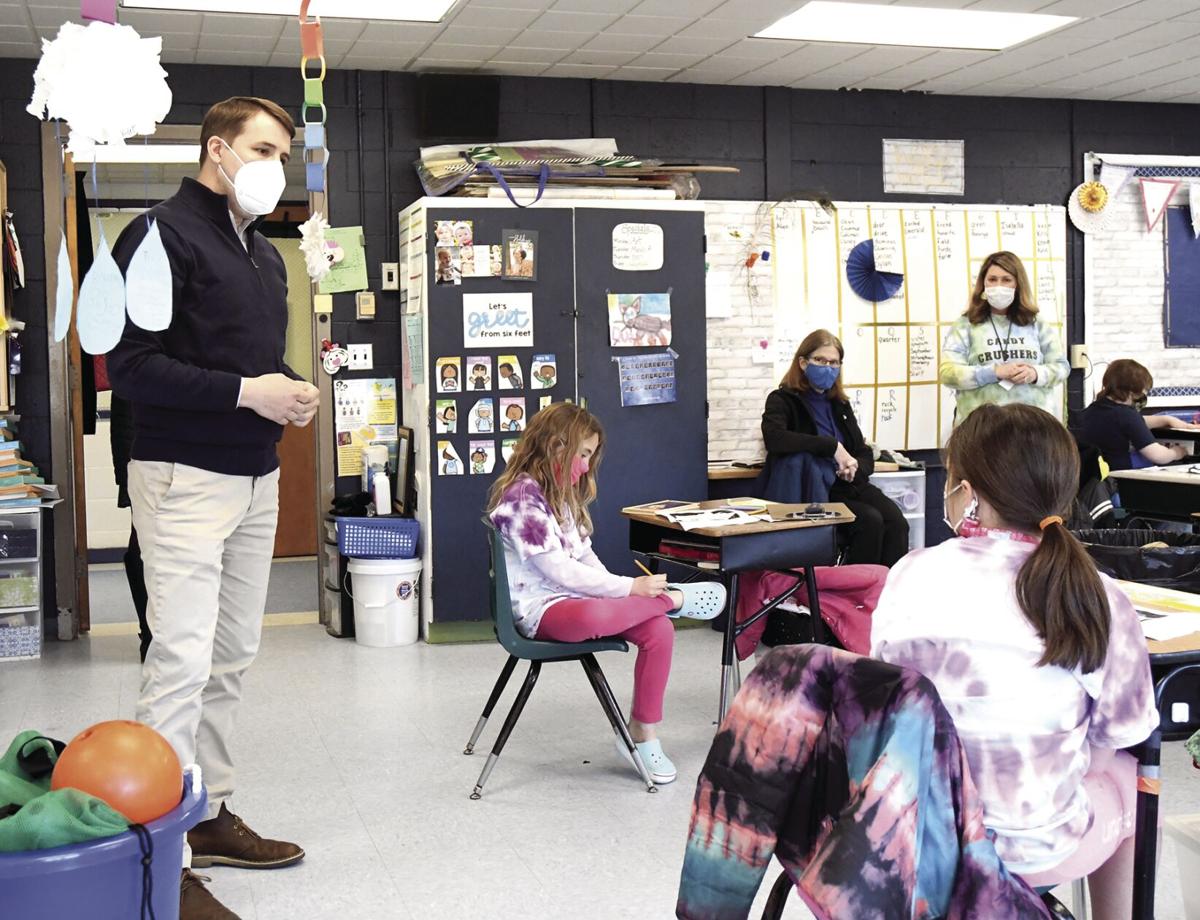 Superintendent Kevin Richard (right) explains to Rep Chris Pappas (D-N.H.) and his local liaison Victoria Laracy how the district has used federal funds during the COVID-19 pandemic the past year at the Professional Development Center at SAU 9 on Friday. (LLOYD JONES PHOTO)

CONWAY — U.S. Rep. Chris Pappas is hopeful better days are ahead for Granite State children and educators thanks to COVID-19 vaccines that are now available. Pappas said he got his first vaccine on Thursday and reported no ill effects while spending Friday in the Mount Washington Valley.

“We anticipate by June, the number of appointments available will far outpace the number of people that are willing and ready to take the vaccine,” he said.

“I think this is going to open up pretty quickly over the next couple of months to the point that if there are other age groups that can take it safely, they'll be able to get it in June or July.”

During a multi-stop swing through Carroll County on April 2, the two-term Democratic congressman from Manchester met in the morning with SAU 9 Superintendent Kevin Richard and Assistant Superintendent Kadie Wilson to discuss how the district has been able to offer face-to-face learning to students.

He also discussed what SAU 9 will do with the $1.9 million in American Rescue Plan Elementary and Secondary School Emergency Relief Fund that was earmarked for the area.

Last month, Pappas announced that New Hampshire K-12 schools will receive $350,501,633 to help schools safely reopen and support students from the school relief fund. According to the state Department of Education, that brings the total of COVID-19 relief funds to the state to over $650 million.

“I know that New Hampshire is now trying to figure out how to disburse these funds,” Pappas said while meeting with Richard and Wilson in the Professional Development Center at SAU 9 on Friday morning.

“This should go a long way toward reimbursing costs that you have been incurring all year. I'd love to hear from you how it's going and how that money might be put to work.”

“We’ll put it to work, all right,” Richard assured him.

In terms of what they've done with prior federal funding, such as the Coronavirus Aid, Relief, and Economic Security (CARES) Act, “I would say we’re used the majority of the money for staff,” Richard said.

Due to the pandemic, "you don't want to mix cohorts, and you don't want to introduce new staff members, so we hired long-term substitutes and even grade-level teachers with that mind, to reduce the cohort size, but also to help cover if somebody is going out and they have to quarantine because their family has been exposed," Richard said.

"We don't want to disrupt education at all, for anybody, so that was a big challenge,” he added.

SAU 9 also rented storage containers for classroom furniture in order to create more social distancing on campus. SAU 9 also purchased large tents for each of the campuses, in order to facilitate outdoor classrooms. The tents will be going back up in the next week or two, Richard said.

Funds also were used to provide food for children throughout the summer, and the broadband network was replaced at Josiah Bartlett Elementary School.

Richard said transportation has been “a hassle” due to the social distancing need to go from 75 students per bus to 26.

Wilson told Pappas: “I think our strategic plan has been a big help. We have just used that plan as a guide in everything that we've done. We really tried to not just be in this constant respond mode but to be thoughtful."

Then she added: "There are times when you're given $207,000, and you have just a month to spend it, yeah, you're a little bit responding.”

Wilson added: “We're trying to also always have a plan so that when those things happen, like we're already in the back of our heads thinking about  (funding), about how that's going to get spent if we get that so that we're able to not be reactive.”

Pappas asked: “In terms of the physical plant of the schools, was it challenging to be able to get, I guess now, the three feet of social distancing that you need to allow classrooms to continue to function,” asked Pappas.

“It was a challenge,” Richard said. “It came down to how many square feet does Kadie need as a student in the classroom? We have some classrooms that are 450 to 500 square feet, others are 900 or 1,000. We had the blueprints out in the summer, were measuring classrooms and then you have to take all the students and go and see principals to see if this will work. We had sticky notes everywhere for this kid, this kid, this kid and they are brothers and sisters, so we want to keep them in that same cohort, as well. It was a tremendous amount of work that people had to do, but it was a challenge.”

Richard said the school day at the high school was shortened by 45 minutes with every teacher having a class while study halls were eliminated.

“We had to change the actual structure of classes,” he said. “You as a student would have four classes but for a two-week period, you might only go to Wilson's class and Richard’s class during the day. And then there's a virtual mini-block built-in, that you would stay connected to your other two teachers, Jones and Laracy. Then, at the end of the two weeks, you flip back, so you'd see Jones and Laracy, and then you'd connect with Richard and Wilson virtually throughout the day. And that was to really minimize when we have to quarantine, it was pretty. We knew these 13 people are going to have to be quarantined.”

Papas wondered if fewer students are distance learning. Wilson said the SAU has gone from 25 percent remote down to 18 percent.

“I would imagine that we'll see people who want their kids to come back to school at the end of May,” Richard said, “So that they can kind of acclimate their children and work on the transitional pieces moving forward.”

In Nelson’s class, Pappas was praised for his hairdo and shoes and chatted with students about the importance of wearing masks.

In Coleman’s room, he learned the students have been face-to-face for 137 days in a row.

“We feel more fortunate than you can ever imagine,” said Coleman.

Students offered other comments to Pappas. “Thank you for letting us go to school and wear masks,” a young boy said.

“We all have a role to play in this,” Pappas responded.

“I’m grateful for you making all the rules for our safety,” another male student said. “I realize how bad COVID is.”

“A lot of people have gotten sick,” said Pappas. “It’s great to see people getting vaccinated. I bet some of your family members have received their first or second vaccines.”

Pappas learned the students were working on their fractions.

“Can you tell me what the bottom part of the fraction is called,” he asked. Hands immediately flew up into the air. “It’s the denominator,” a girl answered when Pappas called on her.

Students quickly shared that the numerator is the top number and students demonstrated how they tell the difference with “N” also standing for the nose and being on top of your body.