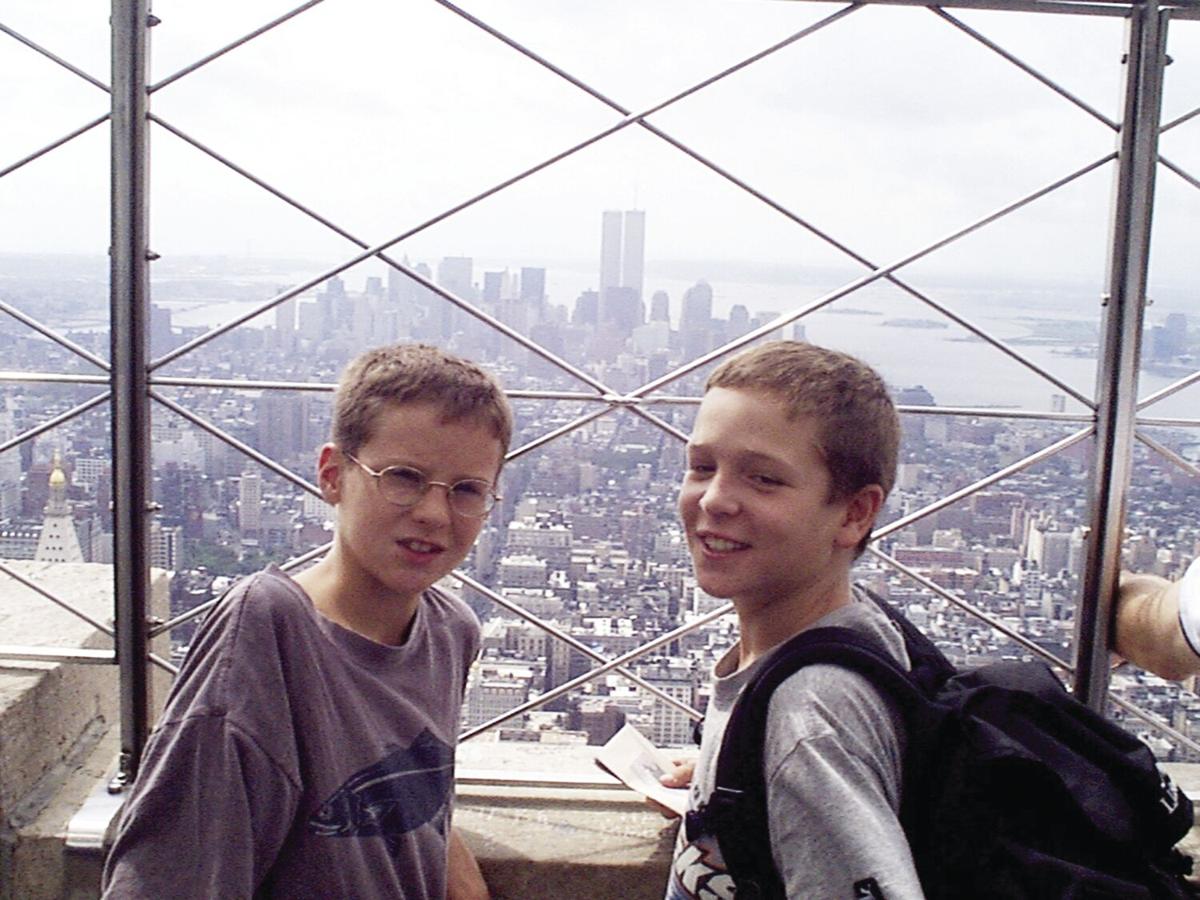 Arran Dindorf (right) and Terry Claussen are seen on Sept. 10, 2001, on the Empire State Building with the World Trade Center towers seen behind them.  (MARK DINDORF PHOTO) 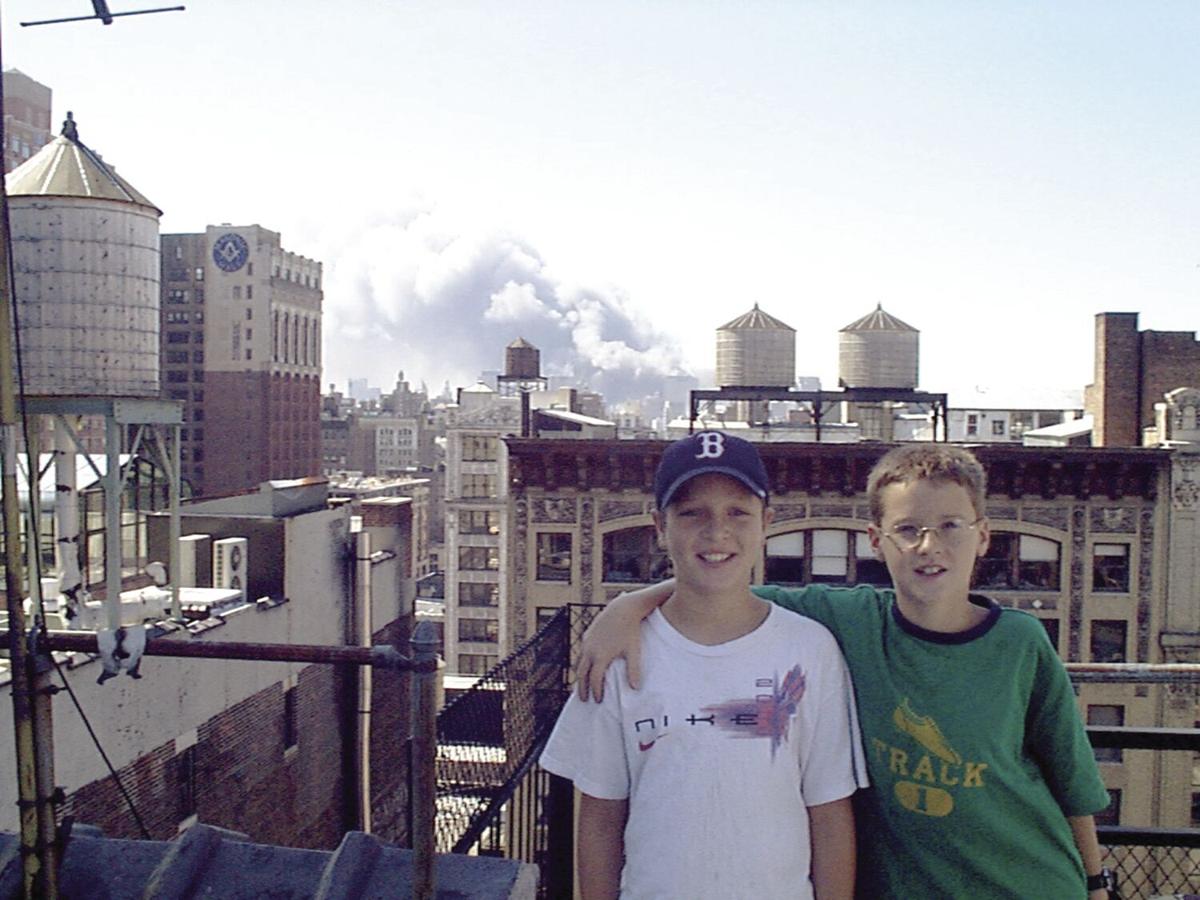 Arran Dindorf (left) and Terry Claussen a pose on the rooftop of an apartment building with smoke from the 9/11 terror strike billowing in the distance. (MARK DINDORF PHOTO)

Arran Dindorf (right) and Terry Claussen are seen on Sept. 10, 2001, on the Empire State Building with the World Trade Center towers seen behind them.  (MARK DINDORF PHOTO)

Arran Dindorf (left) and Terry Claussen a pose on the rooftop of an apartment building with smoke from the 9/11 terror strike billowing in the distance. (MARK DINDORF PHOTO)

Arran Dindorf and Terry Claussen had the full attention of their sixth-grade classmates at Josiah Barlett Elementary School on Thursday. The two boys spoke about being in New York City on Tuesday, 10 minutes away from the World Trade Center disaster.

"It was something we'll never forget," Mark Dindorf, Arran's father, said, recalling how what had started out as a birthday trip to see the Red Sox play the Yankees turned into being smack in the middle of one this country's great tragedies.

"I took my 11-year-old son Arran and his friend Terry to New York City this week to celebrate Arran's birthday," Dindorf said.

"We arrived in Manhattan on Sunday to see the Red Sox game on Monday which ended up getting rained out. It was Terry's first trip to Manhattan so before the game on Monday we went up the Empire State building, had lunch at a dim sum tea room in Chinatown, took in the planetarium show at the new Rose Center at the Museum of Natural History. We arrived at Yankee Stadium at 5:30 p.m. because my son wanted to see batting practice. We waited until 9 p.m. before the game was finally canceled."

The trio stayed with friend Frank Stettner, who lives in a loft on West 27th St.

"We were bummed the game got rained out," Dindorf said. "On Tuesday morning, we were scheduled to head home, but I was feeling badly because the boy's highlight had been cut short .. .The morning dawned bright and clear, and I wanted to add a consolation activity for the boys before we headed home. We considered heading downtown to Battery Park near the World Trade Center to take the Staten Island ferry for a close-up view of the Statue of Liberty."

"It was such a beautiful morning," he recalled. "We were 10 minutes away from leaving Frank's apartment when we heard what sounded like a loud explosion ... We watched the events unfold right before our eyes. We went up on Frank's roof (the 12th story) to watch, and workers on the roof said they saw the jet liner fly over and saw the whole thing happen. It was crazy."

The event created an emotional roller coaster for everyone.

"Arran was terrified and wanted to leave immediately, but there was nowhere we could go, the city was sealed off," Dindorf said. "Terry was very verbal — he had a lot of questions. I think it was wonderful that they each had a friend to talk it all out with. They comforted each other. It took a while for them to understand that they were going to be OK. My son really felt it was going to escalate."

Stuck in the city, Dindorf went out onto the streets at noon to a grocery store. "It's difficult to convey what it was like to see Manhattan burn first hand," he said. "It was like witnessing a great natural disaster, the smoke and ash plume looked like a volcano ... We saw people walking uptown covered with ash and soot. People were walking around with a glazed look in their eyes ... The people in the grocery store were lined up 50 to 60 people deep fearing (supplies) might be shut off."

"One of the things that shook me was how quiet everyone was," Dindorf said.

"Later in the day, I went out for takeout dinner for the adults and everyone was talking this time, which is out of character for Manhattan. People there generally do tend to be full of their own self-importance. If you've ever been to Manhattan you know (people talking to one another) that doesn't happen. I think the people were decompressing, talking it out as a means of coping ...

"We saw firemen hitchhiking their way to the disaster scene, and we watched people walking down the middle of 6th Avenue, a glazed look in their eyes, their mouths agape at the hole in the landscape where the twin towers once dominated. That evening, we returned to the roof to watch the sunset and ponder the uncertain dawn."

On Wednesday, Dindorf and the two boys were able to make it out of the city and back home to the safe haven of Hart's Location.

"Once the boys were home safe and sound," Dindorf said, "I took a walk up the Saco River and that's when the enormity of the situation hit me. I'm glad to be alive and feel fortunate in an odd sort of way to have witnessed this tragedy firsthand. Perhaps telling this story is one of the ways that I am coping."

HART’S LOCATION — Selectman Mark Dindorf, now 63, is grateful that he, his then-young son and his son's friends were able to return home safel…