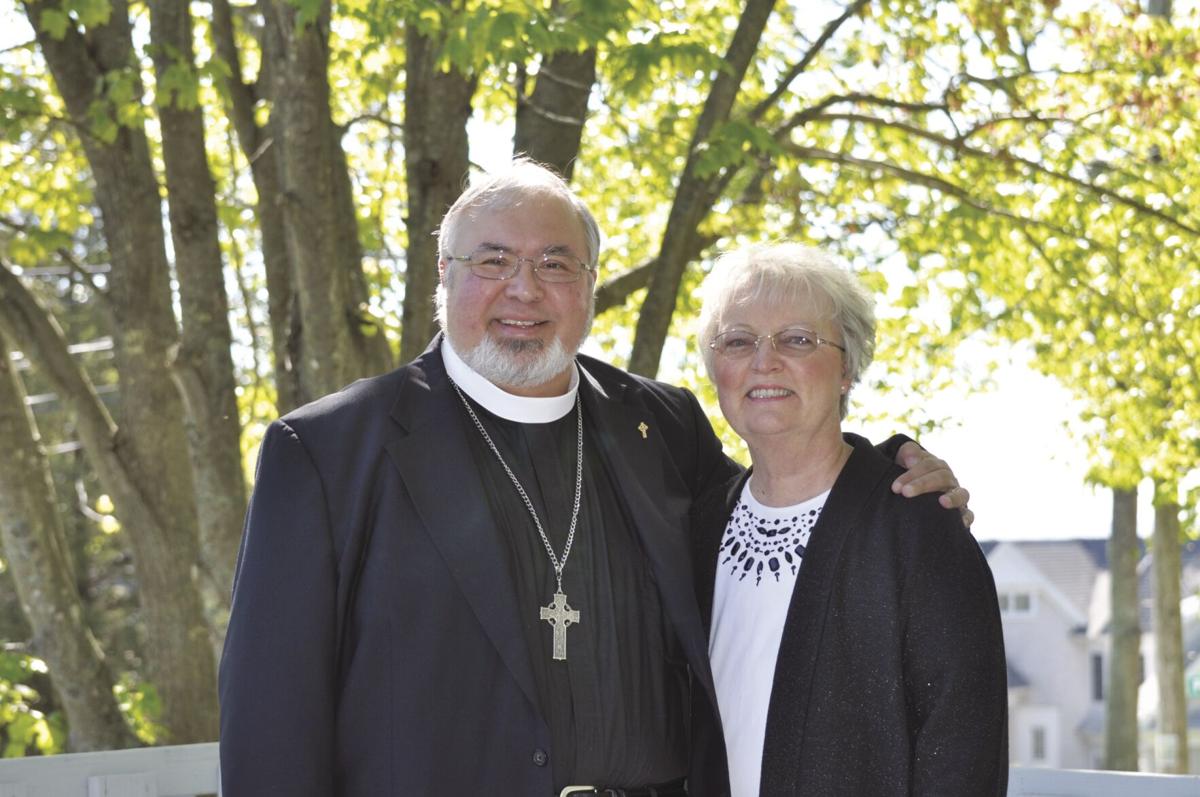 Father Jeffrey Monroe credits wife, Linda, as being a pivotal part of his ministry. (COURTESY PHOTO) 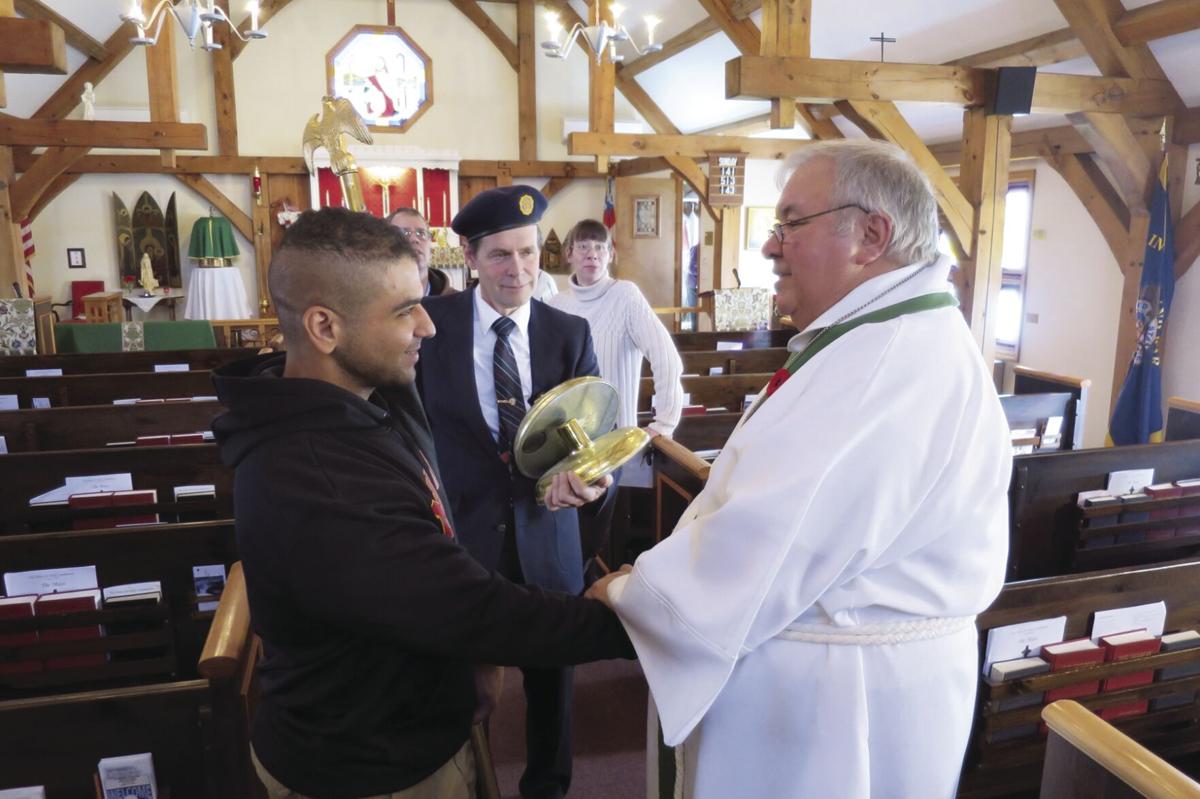 Father Monroe is seen with an Iraq War veteran inside St. Margaret of Scotland Church in Conway Village. (COURTESY PHOTO) 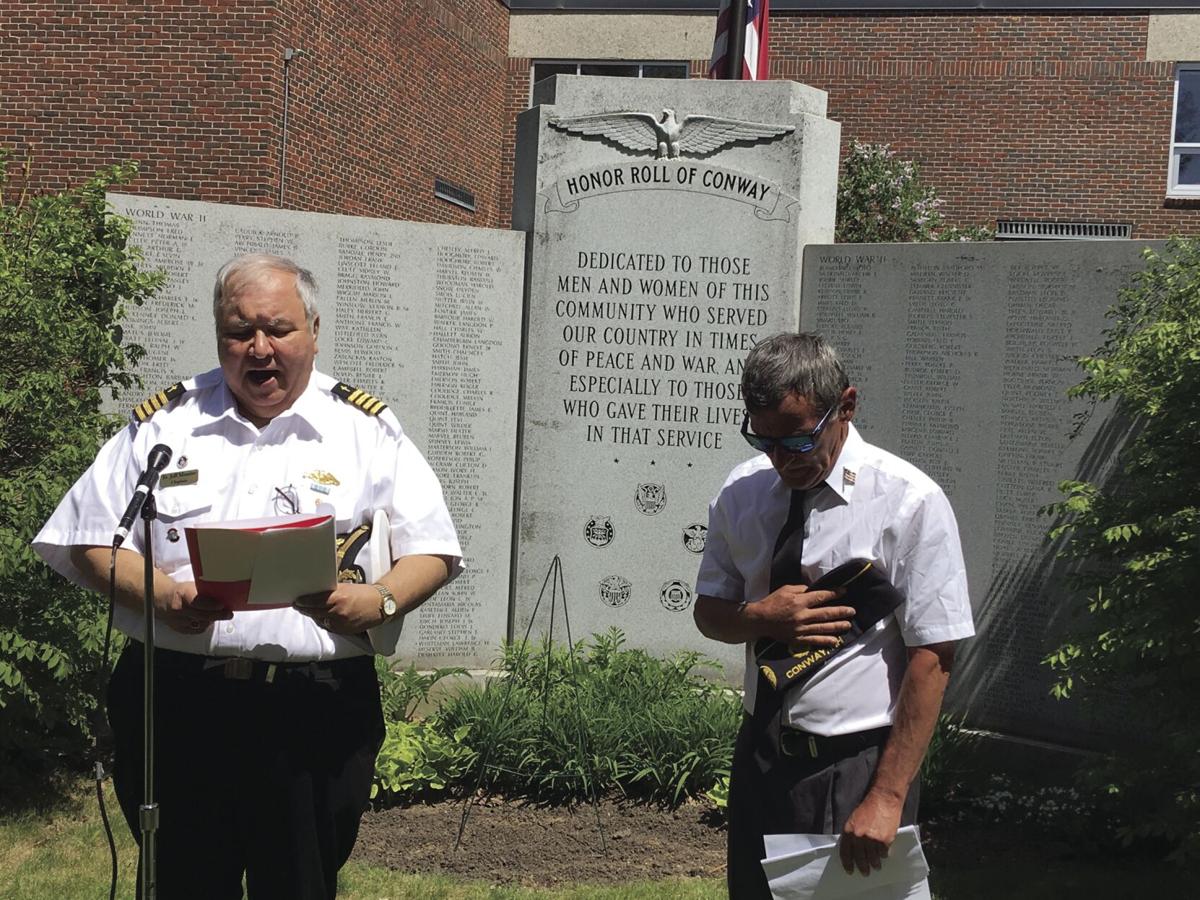 Father Jeffrey Monroe credits wife, Linda, as being a pivotal part of his ministry. (COURTESY PHOTO)

Father Monroe is seen with an Iraq War veteran inside St. Margaret of Scotland Church in Conway Village. (COURTESY PHOTO)

CONWAY — Having steered his parish for the past 11 years, Father Jeffrey Monroe will hand over “command” of St. Margaret of Scotland Anglican Church Sunday to Father Brad Mathias of Bangor, Maine.

Being a priest means being part of the lives of parishioners. But Father Monroe has made it a special calling to also honor veterans during his time at the Conway Village church, which began in 1978 and opened at its current location in 1989.

Monroe, a New Jersey native and Maine Maritime Academy graduate who holds the rank of captain in the U.S. Naval Merchant Marine Reserve, has developed close ties with the American Legion Post 46 located nearby on Tasker Hill Road.

Although he’s leaving the parish, he’s not retiring — he’s being promoted.

Monroe, 66, who has split his time between Maine, Conway and a home in Lincoln, will serve as Canon to the Ordinary (Bishop’s Chief of Staff) in Portland to Anglican Bishop Brian R. Marsh. He also will continue to serve as chaplain to Post 46, veterans and hospitals.

He is confident Father Mathias with his media skills will be a good fit for the church as the world transitions to the “New Normal” during the pandemic.

“We have been undertaking a transition over the past 10 months and that will culminate with the naval-styled ‘change of watch’ ceremony following Sunday’s Mass,” he said.

Father Mathias, who has been assistant rector for the past year and a half, will serve as priest-in-charge for the next several months and then be inducted by the bishop as pastor of St. Margaret’s at a yet-to-be announced date.

Father Monroe was ordained at St. Paul’s Cathedral in Portland in 2002. He and his wife, Linda, live in Cape Elizabeth, Maine, and have a son and daughter (who is an officer in the Merchant Marine) and two grandchildren.

Following his service at St. Paul’s, Father Monroe also served at Holy Trinity in Waterville, Maine; St. Augustine’s in Scarborough, Maine; and St. Michael’s in Holderness. Father Monroe was appointed vicar, then called to be rector at St. Margaret’s in 2009.

He is a graduate of both Maine Maritime Academy and the State University of New York. He received his theological education at the Logos House of Theological Studies in Ellsworth, Maine, where he earned an associate’s degree in pastoral studies and a bachelor’s degree in sacred theology.

He later served as president of the seminary and was awarded an honorary doctor of divinity degree from the seminary. He was ordained at St. Paul’s Cathedral in Portland in 2002.

Raised as a Lutheran, Father Monroe had wanted to be a Navy chaplain, “but it was right at the end of the Vietnam War, and (the Navy) didn’t need anybody,” said Father Monroe, who said his delayed route to the priesthood was “all part of God’s plan.”

“I like to tell people that although I wanted to be a priest earlier, part of the path to follow was for God to put me on a shelf because I needed to ‘cure’ a bit,” laughed Father Monroe. “I was now more mature and the time was right.”

He said his wife, a retired medical office manager, has been part of his ministry as much as he has.

“A priest who is married cannot have a successful ministry without a good, supportive wife. Linda has worked very hard to support people and give them help,” said Father Monroe.

At St. Margaret’s over the years, Father Monroe has led special Memorial Day and Veteran’s Day services. He also has held ceremonies to commemorate the service flags in the timber-beamed church, including that of the Merchant Marine, a cause dear to his heart, especially in seeing that those who like his father served in World War II were given proper recognition by the government.

There are also memorials to World War I, World War II, Korean War, the Women’s Royal Naval Service of World War II, the military police, the Naval Reserve and POWs. The flag in front of the church is dedicated to Vietnam War veterans.

He officiated at the opening and closing ceremonies for the Moving Wall when the scaled-down replica of the Vietnam Wall came to the Post 46 ball field last August.

“Anglicans have a long heritage of honoring those who have fought for our freedoms,” said Father Monroe.

He said St. Margaret’s is a member of the Anglican Church in America, diocese of the Northeast, and is a “traditional” church, in that it does not support in its theology gay marriage or female ordination. “Our ceremonies are very Catholic dating back to the First Century. We are also very evangelical, holding both Holy Scripture and the sacraments of the church as critical to our faith.”