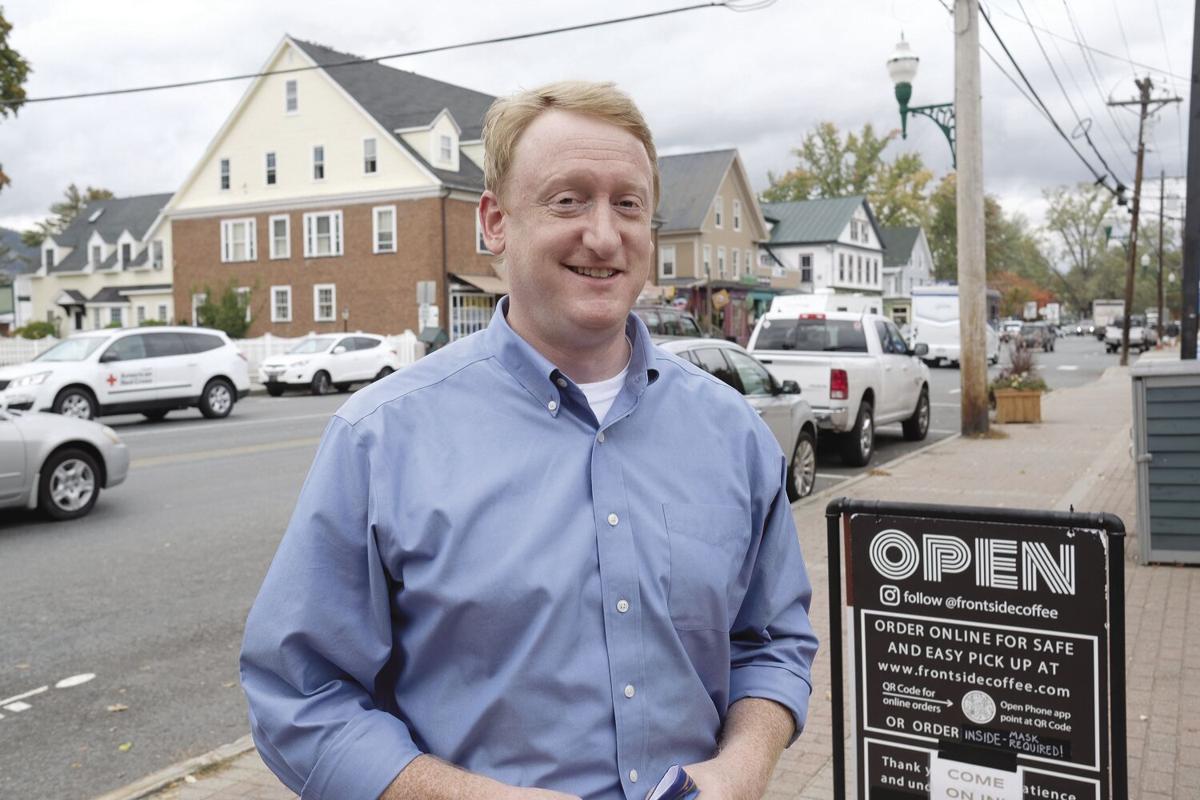 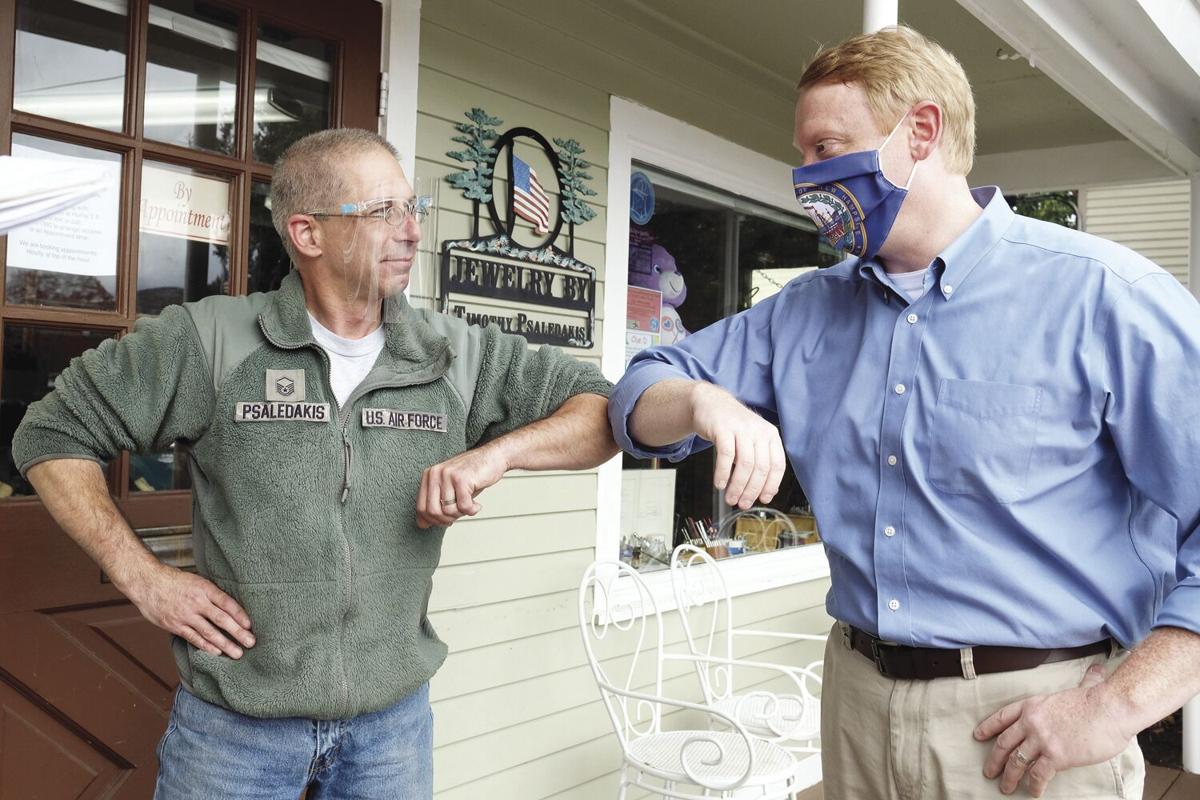 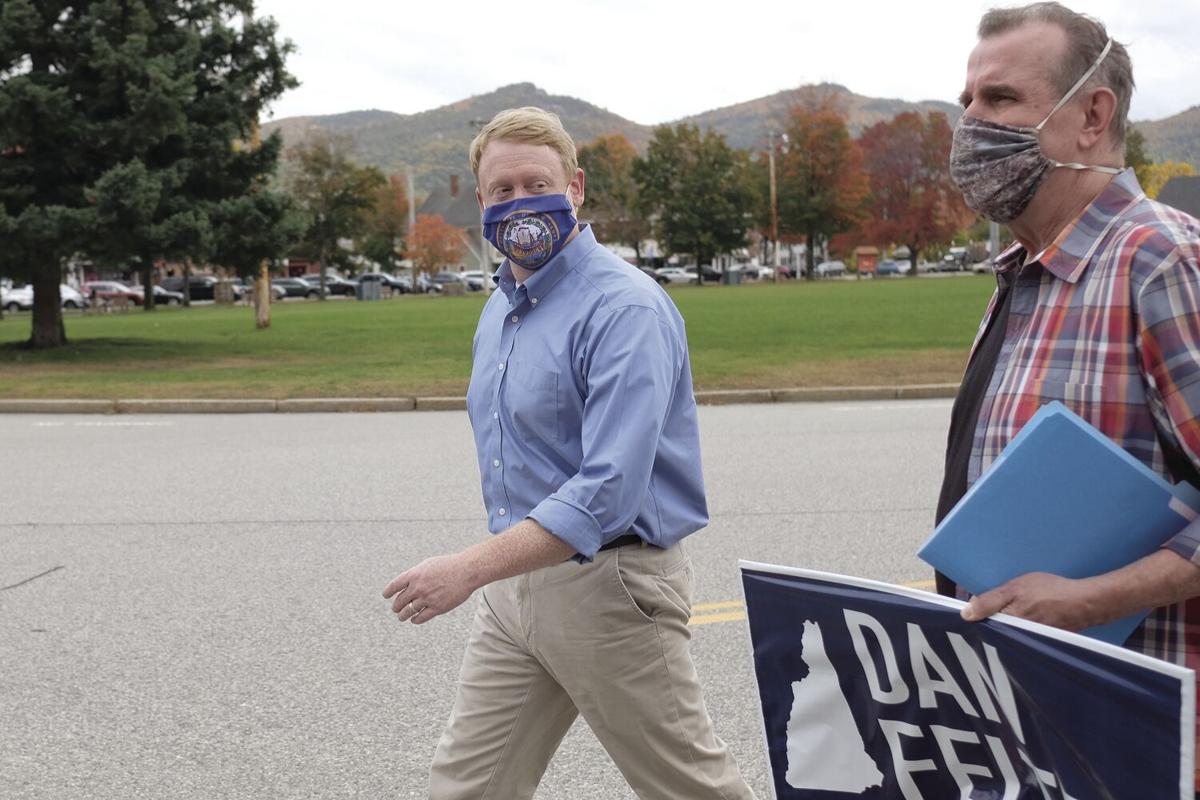 CONWAY — During a tour of North Conway on Monday, Democratic gubernatorial candidate Dan Feltes pledged to help small businesses unlike the man who hopes to unseat in November, incumbent Gov. Chris Sununu.

Feltes, 41, of Concord is N.H. Senate Majority Leader. On Monday, he and his assistant Cayla Eck were escorted around North Conway Village by outgoing state Rep. Ed Butler (D-Hart’s Location) on a fact-finding trip on which Feltes said he hoped to learn about any businesses in town that need assistance due to the COVID-19 pandemic.

Butler: said: “If Dan Feltes becomes governor it will mean that a number of things I care about will receive support. That includes increasing minimum wage, that includes family and medical leave and that includes so many things that many people in our Legislature that were elected, both Democrats and Republicans, fought for and passed and Sununu vetoed.”

“Just like (Donald) Trump, Sununu is looking out for big corporations and those at the top,” said Feltes.

Feltes said as a former lawyer with New Hampshire Legal Assistance, he understands the issue of affordable housing, a major problem in Conway.

One way he would address the problem is to continue capitalizing the Workforce Affordable Housing Fund, something he said Sununu objected to but is still in the budget.

Feltes also visited the Conway Scenic Railroad, where he and Butler met with owner David Swirk. Swirk explained that his family is the third to own it in nearly five decades of existence. Feltes asked Swirk how business is going.

“The company has been in business for 46 years, and I would say based on that, this is the worst year we ever had, but we’re trying to go ahead and make the best of a very bad situation,” said Swirk, adding he continues to make investments in the company and was recently given approval for an “event center” in Conway which will break ground in the spring.

Swirk said the railroad does much to drive the local economy. For example, he said in the first year of his ownership, Conway Scenic drove about 34,000 hotel stays. This year, the railroad only brought about half that since they had to shut down for three months. He said now, the railroad is operating at greater expense and lower capacity. He said they added cars and also modified some cars to add compartments.

Feltes asked Swirk what the state could do to help him.

Swirk said he and the local restaurants have been unable to get culinary help. One reason is many homes have been bought up by those seeking vacation getaways, and that raises the price of the housing stock.

“If you have a culinary job, it’s hard for you to raise a family because the houses are so expensive,” Swirk said.

Next, Butler and went to Nancy’s Alterations & Yarn Shop, where they met owner Nancy Stellakis. After that, they spoke to Tim Psaledakis, owner of Jewelry By Tim and Friends. “Anybody willing to step into a public office has my respect because you all are going to be harassed,” said Psaledakis.

Asked what the state could do to help him, Psaledakis replied he’s been happy with the way the governor has handled the COVID disaster with his executive orders. Psaledakis said he wants to see the state keep a balanced budget.

“Everyone wants to move here for a reason,” said Psaledakis, a retired Air National Guardsman. “If we keep trying to make it like the places they are moving from we are going to spoil New Hampshire.”

Next, they visited North Conway 5 & 10 Cent Store. There, employee Polly Howe said the business had “a really, really good summer” but they had reduced hours and were short-staffed. On a normal year, they would be open 9 a.m.-9 p.m. This year, they were open 10 a.m.-4 p.m.

Following that, they visited the New England Ski Museum, where they met with Rob Burbank, who explained what the museum was all about and pointed out the Tuckerman Ravine mural among other exhibits. Burbank said attendance has been steady at the museum.

Feltes is scheduled to be going on similar Main Street walks in places like Exeter and Nashua.

Feltes lives in Concord with his wife Erin and his daughters Josie and Iris. He earned his law degree from the University of Iowa, and his master’s degree in public policy from Georgetown University, focusing on economics and energy regulation.

For more on his campaign, go to danfeltesnh.com.