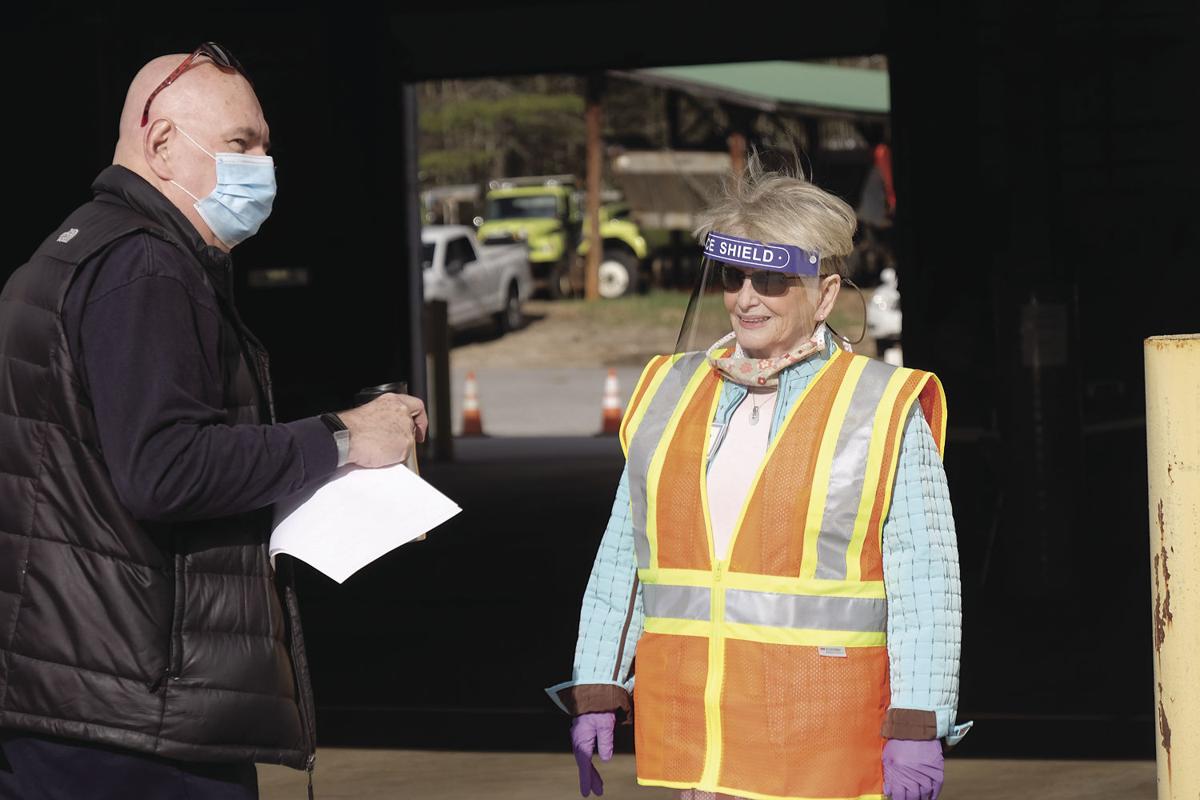 Conway selectmen John Colbath and Mary Seavey with protective equipment wait for voters to show up at the polls at the Conway town garage Tuesday. (JAMIE GEMMITI PHOTO) 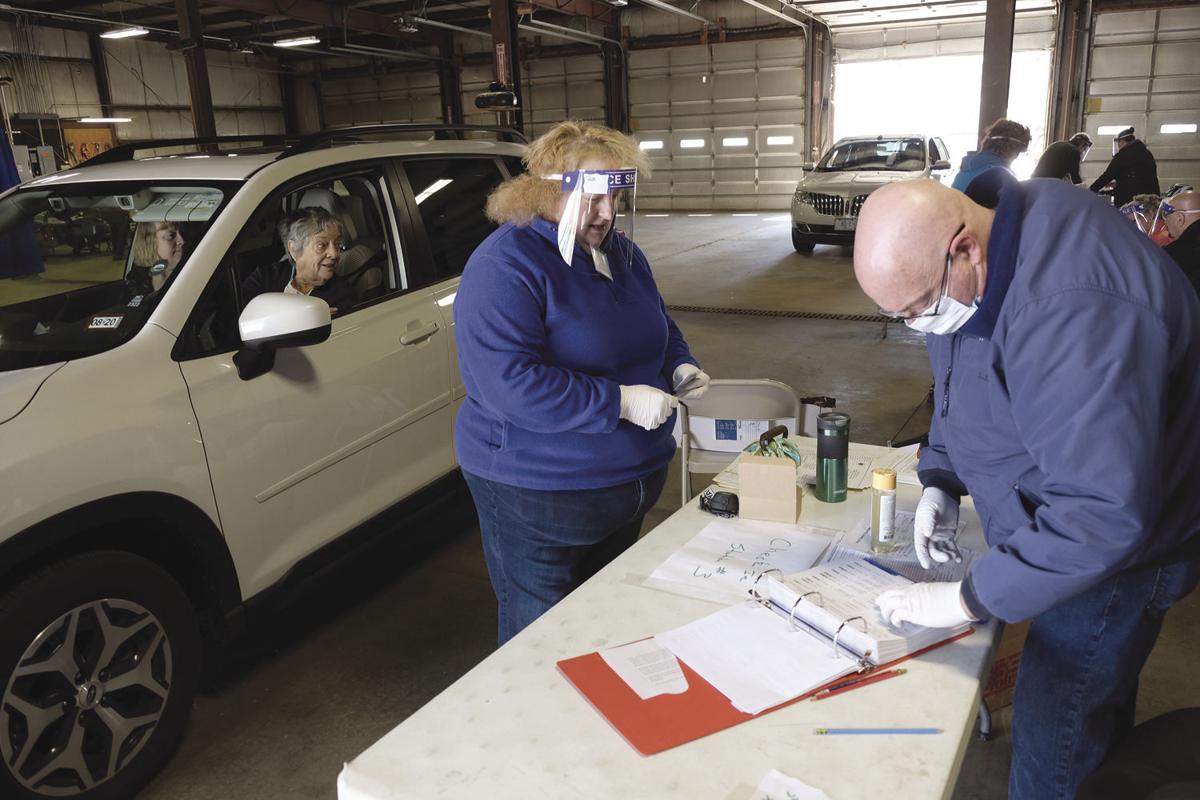 Election officals Ruth Shaver and Jim Lefebvre check in two voter in a vehicle at the Conway Town garage Tuesday. Officials made the local election happen with a drive-thru. (JAMIE GEMMITI PHOTO)

Conway selectmen John Colbath and Mary Seavey with protective equipment wait for voters to show up at the polls at the Conway town garage Tuesday. (JAMIE GEMMITI PHOTO)

Election officals Ruth Shaver and Jim Lefebvre check in two voter in a vehicle at the Conway Town garage Tuesday. Officials made the local election happen with a drive-thru. (JAMIE GEMMITI PHOTO)

CONWAY — By all accounts, the first COVID-19 pandemic election, with drive-through voting at the town garage in Center Conway, was, logistically, a rousing success, as more ballots were counted Tuesday than in 2018 or 2019.

There were 1,457 total ballots cast, including a record 921 people voting absentee.

“It was the most absentee ballot requests we’ve ever had to prepare; the most mailed back and returned; the most processed and recorded ever by this office,” Conway Town Clerk Louise Inkell said Wednesday. She said her office received requests for 1,045 absentee ballots.

She said a big part of that “was thanks to the leniency of the Secretary of State’s Office on the absentee guidelines.”

Wording in the state’s absentee ballot law allows people to vote absentee “by reason of physical disability,” which the current coronavirus has been deemed.

Last year, with snow flurries throughout the day, just 1,030 voters cast ballots on April 11. In 2018, also in April but under fair skies, approximately 1,400 ballots were cast in Conway.

Although windy and cold this year, and with New Hampshire under “Stay at Home 2.0” due to the pandemic, residents embraced their civic duty.

“Hands down best voting experience in all my years of voting,” resident Gredel Shaw posted on Facebook, adding, “I think it was a group effort by many. It was a very pleasant experience!”

“That had to be the easiest voting setup,” Aly McAllister posted. “In and out and you don’t even need to leave your car!”

“I thought it was phenomenal,” Mary Carey Seavey, who won re-election to a fourth term on the board of selectmen and spent the day at the polls as an election official, said Wednesday by phone.

“It was unbelievable how smoothly things went. I think we were done in record time. Other than the wind blowing a little bit, people said they were excited about this new experience.” Her one regret: “I missed the opportunity to go through that way.” (She voted in a booth inside.)

David Weathers, who was elected to an unprecedented seventh term as selectman, also was impressed with how the day went.

“The only station I didn’t work was the checkout,” he said Wednesday. But he said fellow selectman Carl Thibodeau did, “and he said about every third car said, ‘We love this, we wish we could vote this way more often.’”

The one complaint he got “was from someone who got stuck behind Burnham Quint for about 10 minutes because he was socializing with everyone,” Weathers chuckled.

“Traffic was not an issue at all. It never backed out beyond the driveway. At one point, I think there may have been four cars backed up. (Moderator) Deborah Fauver, Louise (Inkell) and the town highway department did a phenomenal job,” Weathers said.

The next two scheduled elections — the primary on Sept. 8 and the general election (and presidential election) on Nov. 3 — are both state elections. Tuesday was a town election, which gave officials a little more latitude in where and how things ran.

Fauver said the current plan is to hold the presidential election in the Peter Ames Gymnasium at Kennett High School. In 2016, 71 percent of the registered voters in Conway (5,161 at that time) cast ballots at the school. But that year, Fauver said, “we only used half of the gymnasium. If we use the whole gym, and people still vote absentee, we’ll be fine.”

While no decision has been made on a site for September voting, Seavey and Weathers believe the town garage can more than accommodate voters.

“I’d like to think we could do it there, but I’m not sure what the plan will be,” said Weathers. “People seemed to like it. Having 900-plus absentee ballots really took the pressure off for everyone. Given the pandemic, people felt better about being able to vote in their cars, they felt safer.”

“Feasibly that could be used again,” said Inkell. “But we’re all in a bit of a waiting game to see what the secretary of state is going to want to do.

“I’m hoping the drive-through is not the new normal and that we can go back (to traditional voting) with some guidance from the state,” she added.

Along the lines of safety, all the election officials were provided with face shields, masks, gloves and hand sanitizer.

Matt Leavitt, the town’s emergency coordinator was able to acquire the PPE (personal protection equipment) from the state, and Fauver drove to Franconia last week to pick it up.

Fauver raved about the job the town’s highway department did in preparing the site.

She called Highway Supervisor Andrew Smith, “hero of the day,” for his creativity.

Over the past week, he acquired cardboard from the transfer station and turned it into disposable clipboards for voters to use while filling out their ballots in their vehicles.

“He was my problem-solver,” Fauver said. “He kept coming up with ideas every time I hit a roadblock.

“There was a lot of Yankee ingenuity to pull this election off,” agreed Inkell.

In terms of voting day registrations, Fauver said there were 18, with eight of those walking in to use the curtained-off voting booths at the garage, while others registered by going the absentee route.

While Weathers said he “thoroughly enjoyed” election day, one thing on Tuesday did throw him a bit of a curveball. “The masks, everyone had them,” he said. “To not be able to see a smile is hard. They put the mask on, and it covers half of their face, it makes it a little difficult to guess who it is when they say, ‘Hi, David.’”

There’s also a bit of trivia associated with this election — Conway had a sixth selectman for the day.

Selectman Steve Porter was unable to work the polls, so resident Marshall Allan was sworn in for the day.

“I think Marshall had the only warm space,” Seavey said. “He was out in the sun collecting ballots. He lapped it up, telling everyone how official he was, even if it was just for one day.

“Marshall and I were in Sunday school together growing up, and I don’t think we’ve stopped laughing since then,” she added.

More trivia: Seavey got the most votes of any candidate this year, with her 1,104 votes.

Jessica Whitelaw, one of three school board members running unopposed for three-year seats, garnered the second-most, with 1,093.

And Ted Sares, who chose not to see another term on the municipal budget committee, came in third with 1,077 votes in his uncontested run for a three-year term as trustee of trust funds.