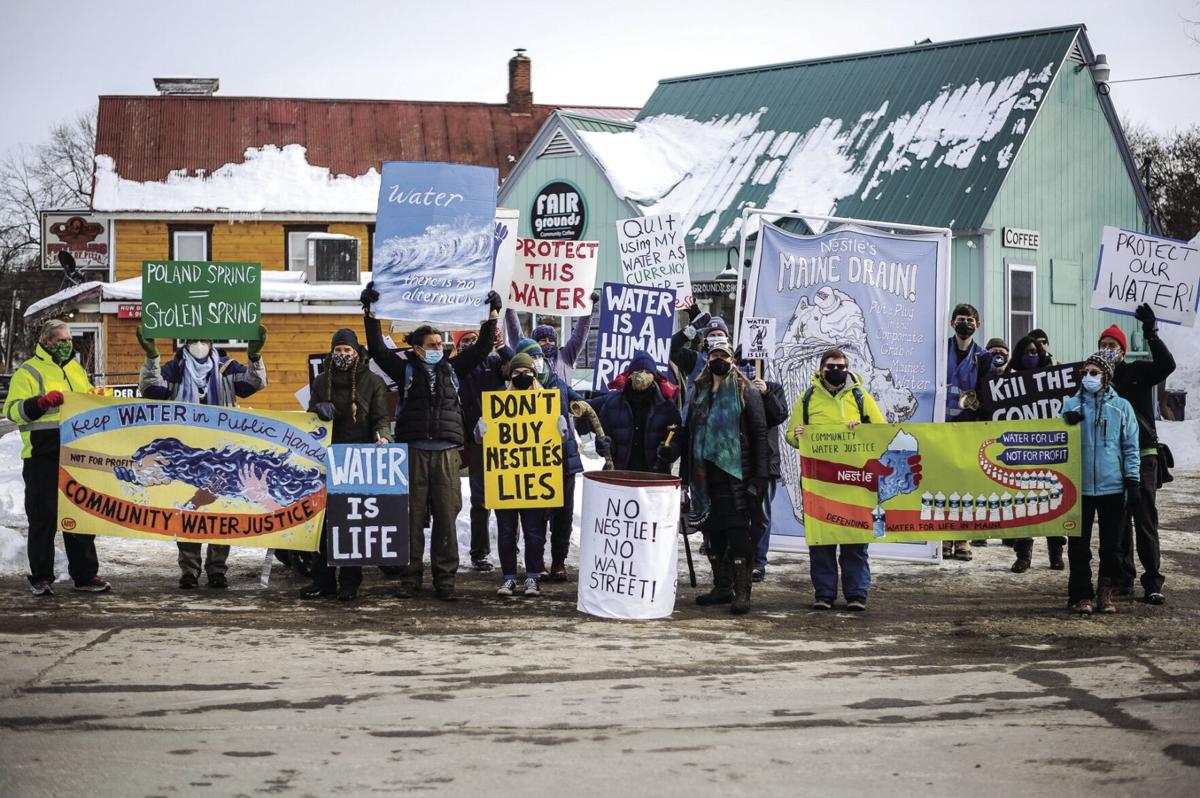 Dozens of people attended a protest Saturday of a possible sale of Poland Spring to One Rock Capital. The protest was led by Nickie Sekera of Fryeburg who is in the front row third from right. (JULIAN ZHU PHOTO) 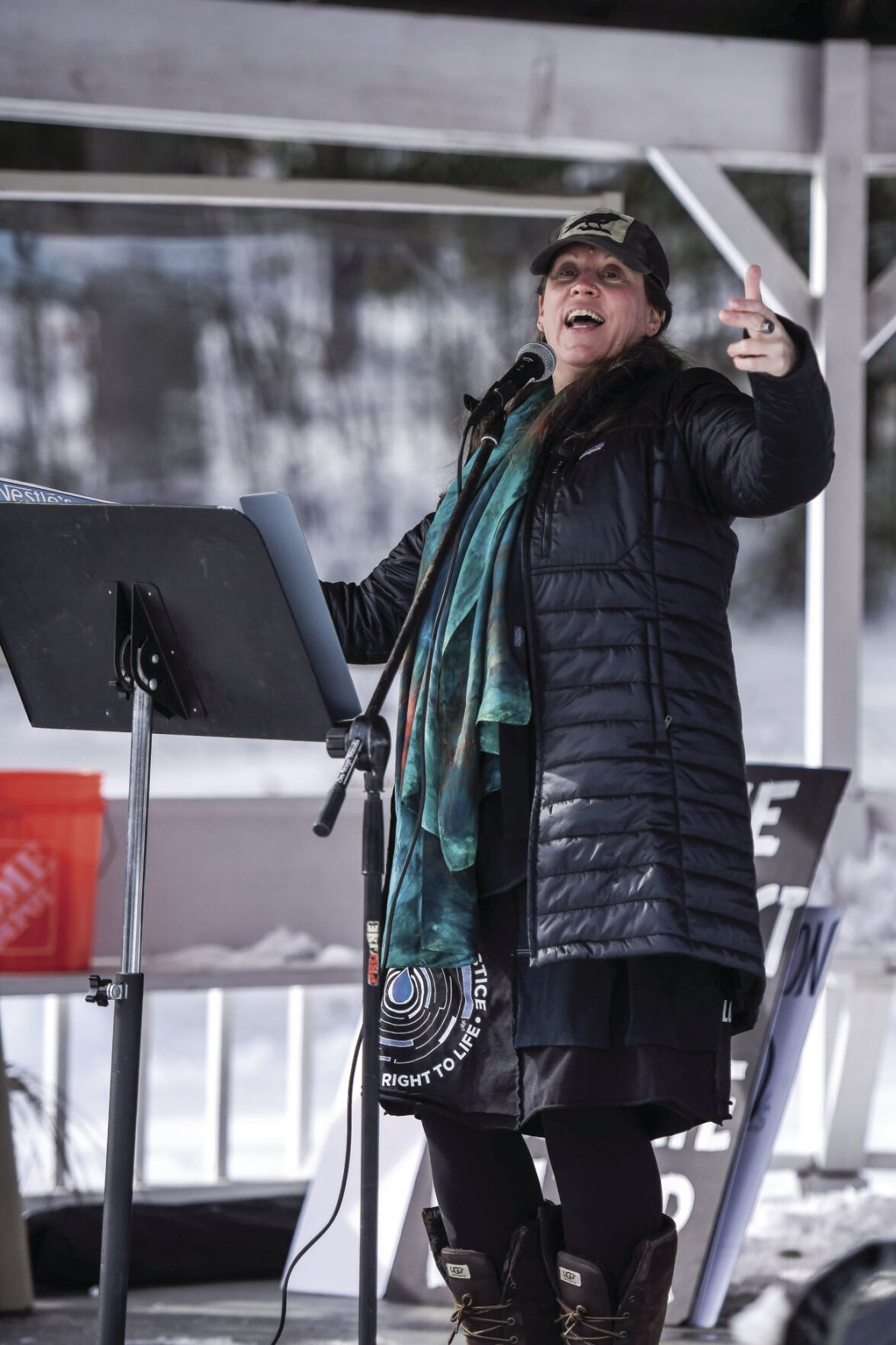 Dozens of people attended a protest Saturday of a possible sale of Poland Spring to One Rock Capital. The protest was led by Nickie Sekera of Fryeburg who is in the front row third from right. (JULIAN ZHU PHOTO)

FRYEBURG, Maine — A crowd of about 100 people gathered in downtown Fryeburg last Saturday to "sound the alarm" that Nestle may sell Poland Spring to private equity firm One Rock Capital.

Nestle announced last June that Poland Spring was among its U.S. brands that could be sold off as part of a new direction for the international company.

Nestle S.A. is headquartered in Vevey, Vaud, Switzerland. According to statement released June 11, its board of directors "approved a new strategic direction for its waters business" that will focus on its "iconic international brands" while also seeking to improve the environment.

On Feb. 3, Swissinfo.ch, a branch of Swiss Broadcasting Corp., reported that Nestle was "in exclusive talks with a consortium of buyers led by U.S. private equity firm One Rock Capital to sell its North American water business, which includes the Poland Spring and Pure Life brands, for about $4 billion."

On the same day, Community Water Justice launched an event page on Facebook called "End the Nestle Water Contract — Get Wall Street out of Main(e) Street!"

In a statement to the Sun Monday morning, Community Water Justice cofounder Nickie Sekera said about 100 people gathered Saturday to "Sound The Alarm about the largest private transfer of water for bottling in U.S. history." Sekera cofounded Community Water Justice with her son, Luke, 17, and several other activists. Luke is a senior at Fryeburg Academy.

"Wall Street and water don’t mix,” stated Nickie Sekera, Community Water Justice cofounder and Fryeburg resident. “Rural communities cannot afford to compete with Wall Street speculators for Maine’s groundwater. This water connects to all of us and should be stewarded by the local communities who depend on them, not negotiated away behind closed doors, exploited and exported by corporations for private profit.”

Schwarz said she has seen an increase in Fryeburg residents who have reported  that their wells have run dry and at the same time Nestle continues to take water.

"Our brooks, creeks, streams, rivers and ponds have visibly lower water levels than in previous years, particularly in the summer," said Schwarz. "Despite these developments, as well as evidence of the detrimental effects on important flora and fauna, Nestle’s pumping of 350,000 gallons of water per day (118 million gallons of water in 2019) proceeds unabated."

Luke Sekera said he and his classmates are coming of age at a time when water scarcity is a growing threat to their future security.

"We cannot trust corporations like Nestle, whose motivator is profit, to act with concern for environmental sustainability or our best interests. Nor can we trust a political system that gives corporate interests an elevated, protected status in exchange for campaign contributions. Both are complicit in undermining our water security," said Luke Sekera. "Community Water Justice is part of a growing alignment, of all identities from across the world, that is resisting water privatization and challenging the corrupt systems that are allowing it to take place.

"To have a clean environment for ourselves and future generations is our right. To ensure that our rights are protected, taking action is our responsibility. And if we ignore our responsibilities to protect them, we risk losing our rights."

News of the protest went national as the Associated Press reported on it. The story was picked up by the Washington Post, ABC News and U.S. News & World Report.

Sekera told the Sun that there were four demands rolled out on Saturday.

• Stop the privatization of Maine's water — Keep stewardship in the hands of the local community, not corporations or Wall Street

• No transfer of Nestle contracts or permits in sale. Contracts not transferable to any new buyer and no long-term contracts.

•  Expand the scientific data of our aquifer study to include the recommendations proposed by the Fryeburg Water District.

In 2014, a group of three retired judges, standing in for members of the Maine Public Utilities Commission who had to recuse themselves, approved a long term contract in which Fryeburg Water Company could sell water to Nestle for up to 45 years when extensions are included. Maine Supreme Judicial Court upheld the deal in 2016.

In 2016, Mark Dubois, Poland Spring natural resource manager, said  that the contract creates a stable source of income for Fryeburg Water Co., which helps to maintain stable rates for their customers. The minimum purchase per year is 75 million gallons. Dubois said Poland Spring isn't required to take that much but is required to pay for at least that much. He said that's to ensure that Fryeburg Water Co.'s income doesn't get too low.

"We would be first in line to be cut," said Dubois. "The contract codifies that ability to reduce or suspended Poland Spring's water withdrawal."

Sekera on Saturday said she is working on a bill that would prevent bulk water exporters from obtaining such long-term contracts.

The statement from LaMountain encouraged concerned citizens to keep up the fight.

"In the face of this planned sale, it falls on all of us to make sure we’re involved in negotiating changes to existing contracts and are engaged in efforts to protect our groundwater from corporations who seek, through a lack of transparency, to control it for private profit," said LaMountain. "It’s obvious through the intended sale of its bulk bottled water industry, that community action against Nestle is working. Due to Community Water Justice and all of us applying pressure, it has become impossible for Nestle and other corporations to ignore our efforts to protect our fundamental water rights."