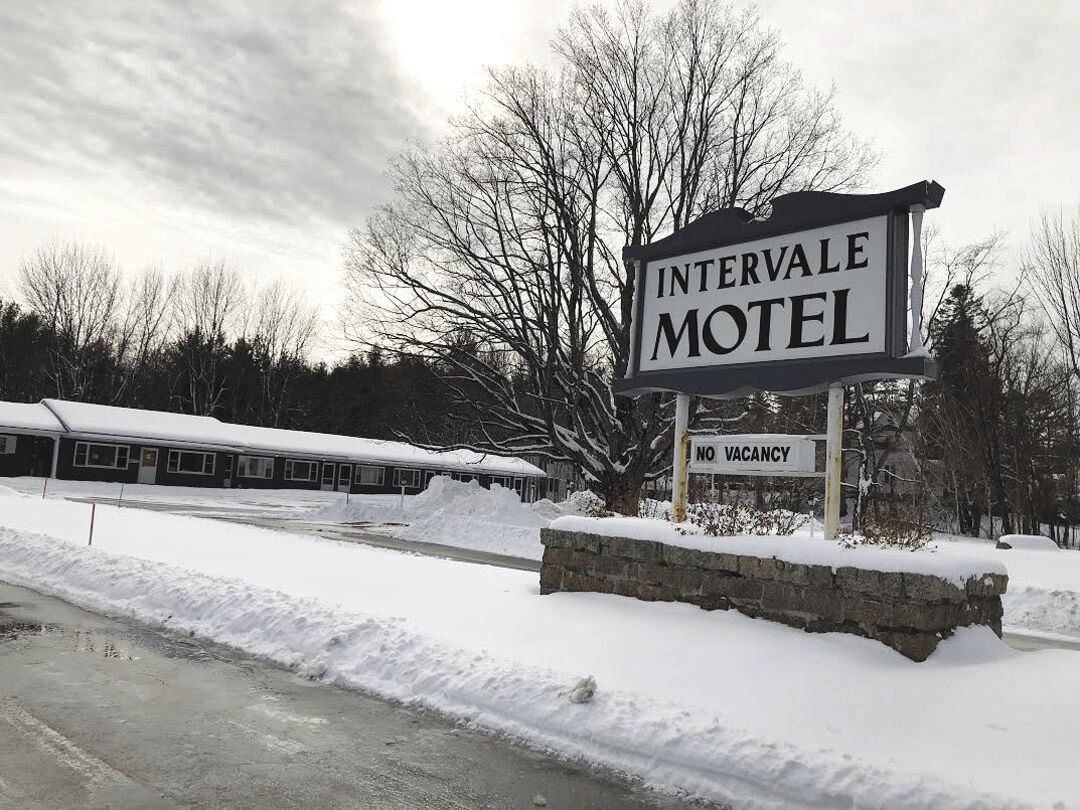 Developers are proposing to tear down the 16-unit Intervale Motel and put up a 105-room hotel. (MARGARET McKENZIE PHOTO)

The east elevation for the Viewpoint North Conway Hotel planned to be built across from the Scenic Vista in Intervale. (COURTESY IMAGE) 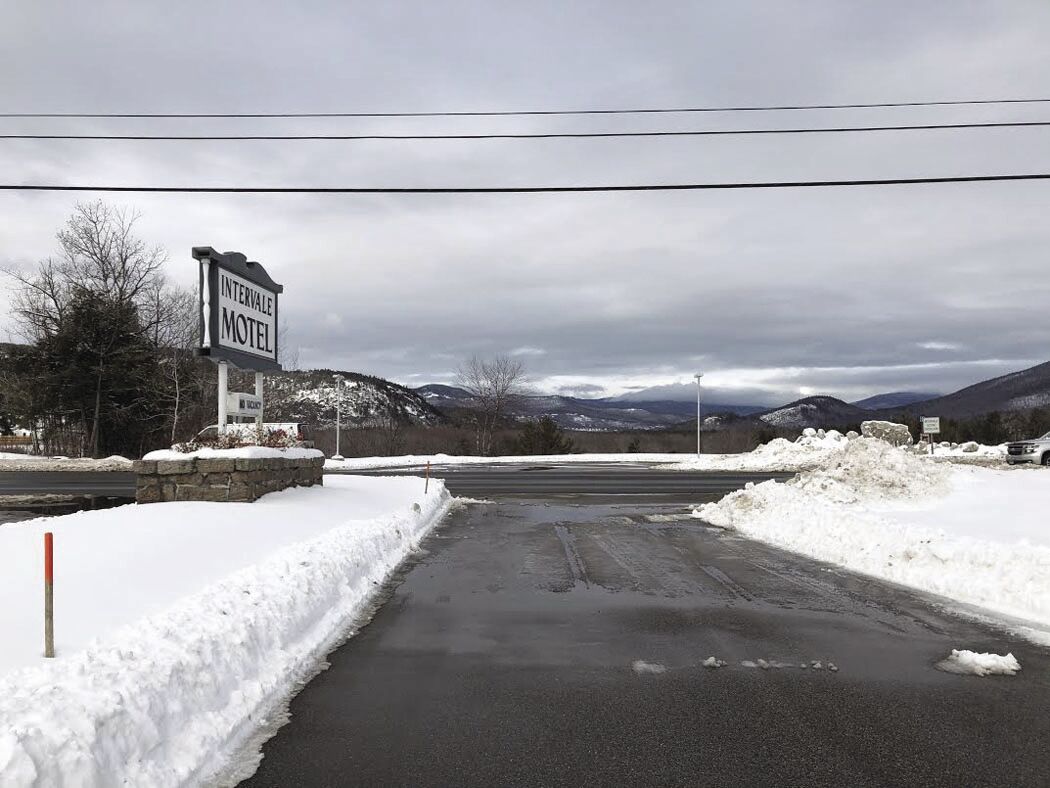 The view from the Intervale Motel can be breathtaking on a clear day when you can see Mount Washington. (MARGARET McKENZIE PHOTO) 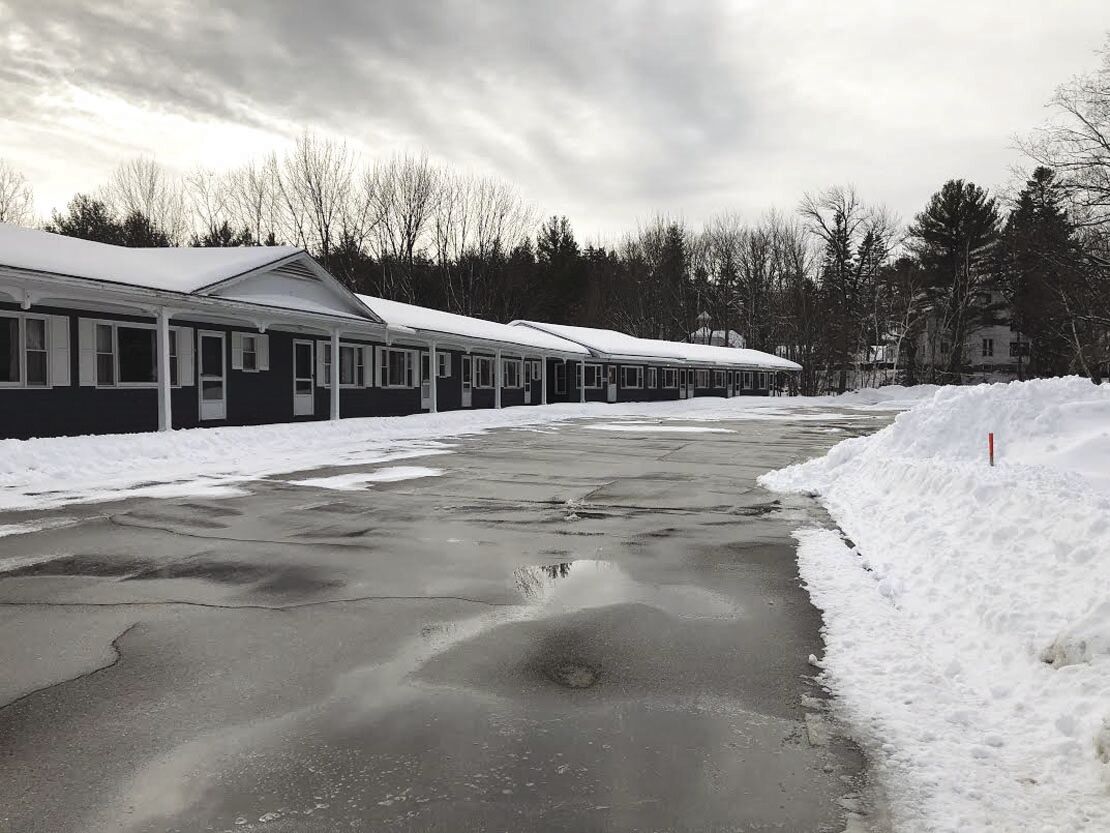 The Intervale Motel, seen Wednesday, has been at this location for 55 years. (MARGARET McKENZIE PHOTO)

Developers are proposing to tear down the 16-unit Intervale Motel and put up a 105-room hotel. (MARGARET McKENZIE PHOTO)

The east elevation for the Viewpoint North Conway Hotel planned to be built across from the Scenic Vista in Intervale. (COURTESY IMAGE)

The view from the Intervale Motel can be breathtaking on a clear day when you can see Mount Washington. (MARGARET McKENZIE PHOTO)

The Intervale Motel, seen Wednesday, has been at this location for 55 years. (MARGARET McKENZIE PHOTO)

CONWAY — A site with one of the most expansive views of Mount Washington in town, across from the Scenic Vista in Intervale, is about to undergo major redevelopment, pending all approvals.

On Feb. 11, the Conway Planning Board will begin “full site-plan review of a proposal to demolish the existing single-story, 16-unit, 1965-built Intervale Motel and to construct on its site a 105,836-square-foot, four-story, 105-room hotel with associated infrastructure at 3599 White Mountain Highway, North Conway (PID 202-168).”

As currently proposed, the structure — to be known as the Viewpoint North Conway — will feature a rooftop lounge and restaurant, according to project civil engineer McAllister, who filed the plans with the town on Jan. 19, with a minor revision submitted Feb. 2.

McAllister said the proposed rooftop restaurant and lounge are currently envisioned for hotel guests only due to parking limitations on the property.

“The windows will face out to the Scenic Vista (across Route 16). The building will be fronted by Route 16 with parking in the rear,” said McAllister, who said he has been working on the project since the beginning of last summer.

Access will be from Route 16 and Intervale Cross Road.

Located across from the state’s Scenic Vista rest area, which the Cannell family donated to the state in 1967, the site is just south of the recently renovated Cannell’s Country Store in the same complex that houses Trail’s End Ice Cream, the Lock Shop and Subway.

The facility will feature an indoor pool, according to McAllister.

Architects for the project are Stuart J. Anderson and Phillip M. Bennett of Alba Architects of North Woodstock.

The hotel will have access to ski touring trails, as it abuts a Mount Washington Valley Ski Touring Association trail across from the 1785 Inn across the street. That inn was sold last year by former longtime owners Becky and Charlie Mallar to local short-term rental business owner Scott Kudrick.

“We plan to have talks with the ski touring center about continued use of the trail although there will be development impacts," said McAllister. "There is no easement for the trail right now so we want to solidify the agreement for it to continue. The owners are going to coordinate that when the time comes with the trails association,” said McAllister.

The building would sit near the site of the onetime Intervale House, a grand hotel built in 1860 that burned down in 1923, according to the Bartlett Historical Society.

A vintage tourism brochure says it had “a wide piazza” that extended “nearly around the whole house, giving a promenade of over 400 feet.”

The hotel project joins others in the pipeline locally, including:

• The White Mountain Hotel & Resort, which plans to add 40 new guest rooms and suites; a new ballroom featuring over 3,000 square feet of meeting and function space; and a new clubhouse and pro shop for the Hale’s Location Golf Course.

• A four-story, 90-room hotel to be built within the footprint of the Cranmore Fitness Club, which will be demolished. According to Cranmore General Manager and President Ben Wilcox, the hotel will be a Fairfield Inn and Suites Hotel, a brand owned by Marriott. It will be operated by Lafrance Hospitality Associates, which operates the Residence Inn by Marriott in North Conway.

• A recently constructed but yet-to-open 80-room, four-story, 2,000-square foot Home2Suites and restaurant at the 2.51-acre former Fandangle’s Restaurant site near the juncture of Routes 302 and 16.

“It does beg the question of the danger of North Conway possibly having a saturation of hotels. I have to say I do have that concern,” said Earl Wason arl Wason of Wason Hospitality Associates of Portsmouth.

For more information and to see the Viewpoint's design plans, go to conwaynh.org/planning-boards.

TeleTalk question: Is the site of the Intervale Motel a good location for a new four-story hotel?

At the site of the Intervale Motel, located across from the Scenic Vista, developers are proposing to build a 105,836-square-foot, four-story,…

Does it strike anyone else as odd that we as a community can’t agree on the need or location for public restrooms for visitors but we keep adding more and more hotel beds ?!!

Crazy defined is continually building hotels then complaining about how there are to many tourists.

Good luck trying to staff it.

Hey why not? Keep building, pretty soon Conway will be Salem, NH 2.0.

Don't often agree with justsayin' but he makes an excellent point.

We have a habit of just relocating the same people from one business to another without increasing the labor force.

I'm wondering who did the research on this "investment/business plan".