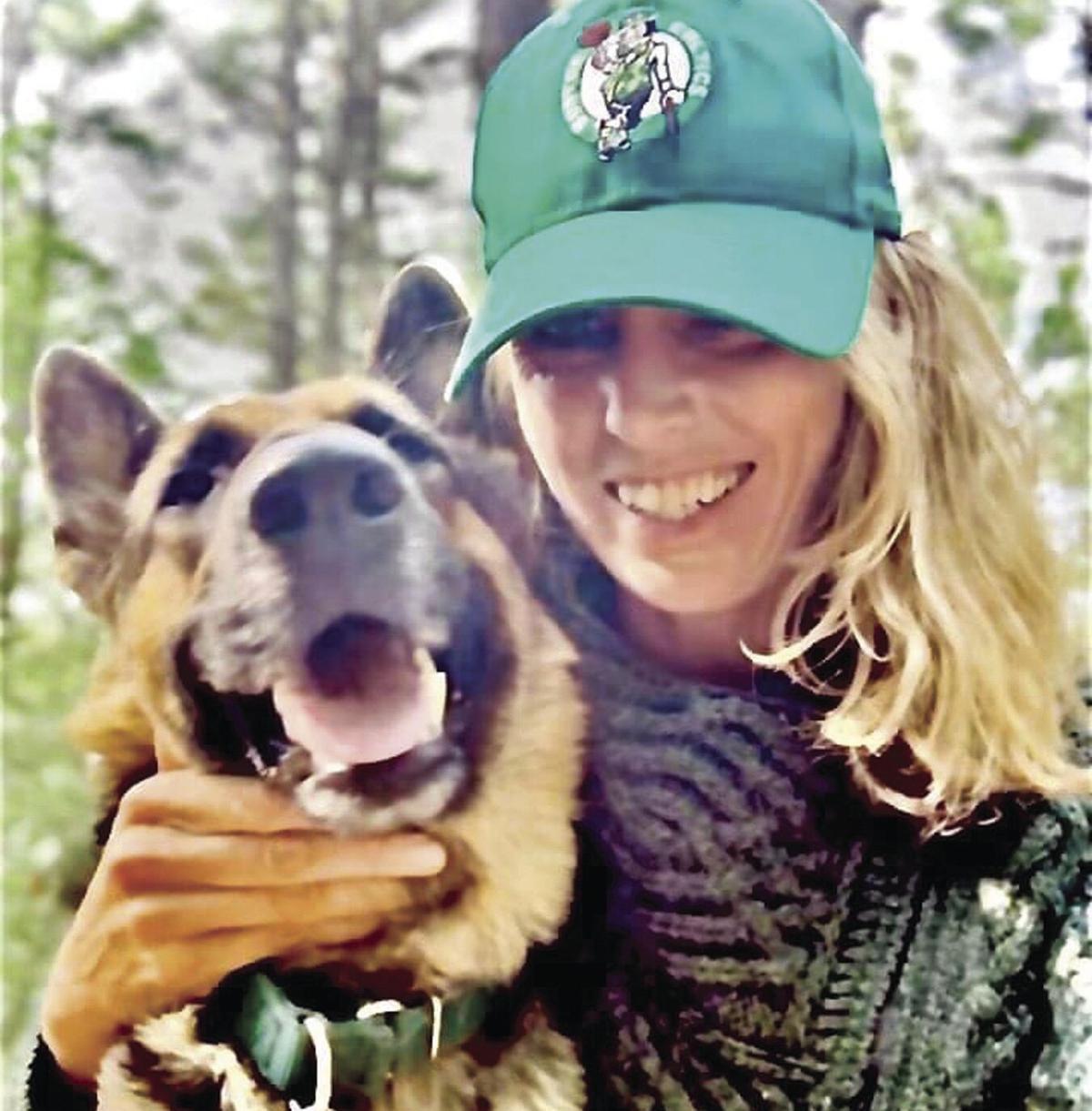 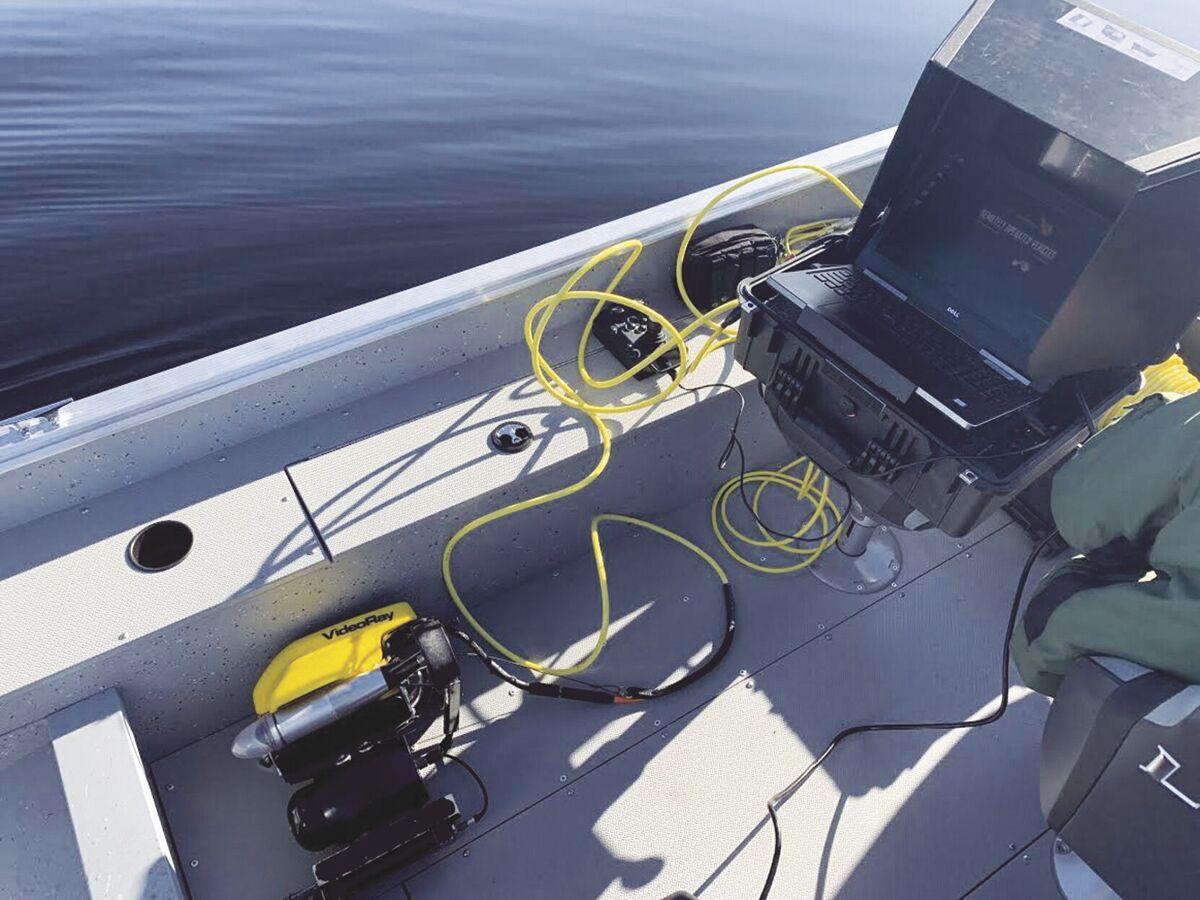 The N.H. Fish and Game Department used this ROV (remotely operated vehicle) last Saturday to recover the body of Flossie, the German shepherd who belonged to the woman found dead in the lake on March 26. (FISH AND GAME PHOTO) 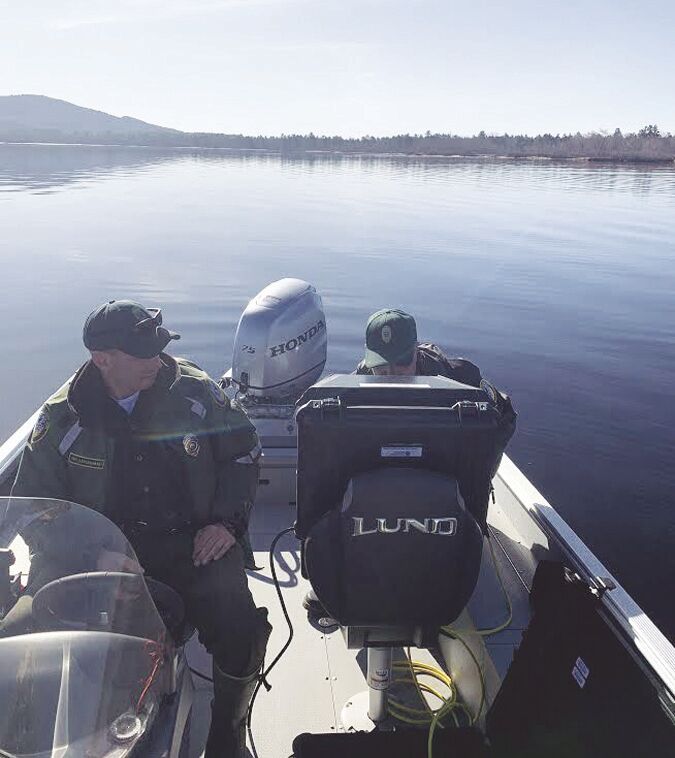 Members of Fish and Game Underwater Search Team recovered a German shepherd's body from Ossipee Lake over the weekend. (FISH AND GAME PHOTO)

The N.H. Fish and Game Department used this ROV (remotely operated vehicle) last Saturday to recover the body of Flossie, the German shepherd who belonged to the woman found dead in the lake on March 26. (FISH AND GAME PHOTO)

Members of Fish and Game Underwater Search Team recovered a German shepherd's body from Ossipee Lake over the weekend. (FISH AND GAME PHOTO)

OSSIPEE — New Hampshire Department of Fish and Game has announced they recovered the body of a German shepherd in the waters of Ossipee Lake on Saturday, April 10.

A statement from Fish and Game said the dog is believed to be Flossie, the same dog belonging o the Lowell, Mass., woman who was reported missing last month and whose body was also recovered in the lake on March 26.

Sandy Lyons, sister of Sinead Lyons, 41, who went missing after having been last seen taking a walk near the lake with her dog on March 12, thanked Fish and Game for finding Flossie.

Members of  Fish and Game Underwater Search Team deployed an ROV (remotely operated vehicle) in the vicinity of where Sinead had been found by a Fish and Game dive team.

"Shortly after deploying the ROV they located the dog in approximately 12 feet of water, 12.5 feet from where Ms. Lyons was located on March 26," said Fish and Game Lt. Bradley Morse Saturday.

"The dog matched the description of Ms. Lyons' dog and is believed to belong to her. The dog was secured and handed over to the proper authorities for disposition."

On the same day, Sandra Lyons wrote a brief note on Facebook thanking Fish and Game and New Hampshire State Police for their efforts.

"My parents and I received the news we have been waiting for, it was deemed safe enough for NH Fish and Game officers to recover my sister Sinead's beloved Flossie today," Lyons posted last Saturday.

"She will be cremated and reunited with my beautiful sister, so that they can forever more continue their adventures together," Sandra Lyons wrote.

"Thanks again to the New Hampshire State Police and New Hampshire Fish and Game, search and rescue for working so hard to find my big sis and Flossie."

Morse and Capt. Michael Eastman of New Hampshire Fish and Game led the effort to recover Lyons. Eastman said the dive team thought they had a “blip” on their sonar that could have been Flossie, but when the divers went to recover Lyons they couldn’t find the dog. At the time, there was a lot of fog and ice still on the lake.

Lt. Jim Fogarty of New Hampshire State Police said Lyons' recovery was performed under "conditions that were not ideal for their safety."

To find Lyons, searchers launched out of the Weetamoe Road area in the southwest corner of the lake.

Fogarty said two witnesses were instrumental in finding Lyons. The first person saw Lyons enter the lake from a path from Constitution Park, and the second person saw her with the dog in on the lake near Weetamoe Road area, perhaps about a mile from where she entered the lake.

Morse told the Sun Monday that Fish and Game had wanted to go back and check the area now that ice is out and conditions are safer. He said "anomalies" on the bottom that were picked up in March gave them the idea where the dog would be. Flossie sank to the bottom and remained in the area, he said.

Fogarty said recovering the dog "was the right thing to do for the family, and Fish and Game has the means to do it."

Fogarty said Fish and Game did a great job with both recoveries.

Lyon's death is considered accidental and the recovery of the dog didn't have any investigative purpose, said Fogarty.

Morse said the ROV, which is equipped with sonar, camera and lights, has the ability to grasp what it finds on the lake bottom, such as a body. The ROV is on a tether. Morse said in 2018, the ROV recovered a body from water that was 72 feet deep.