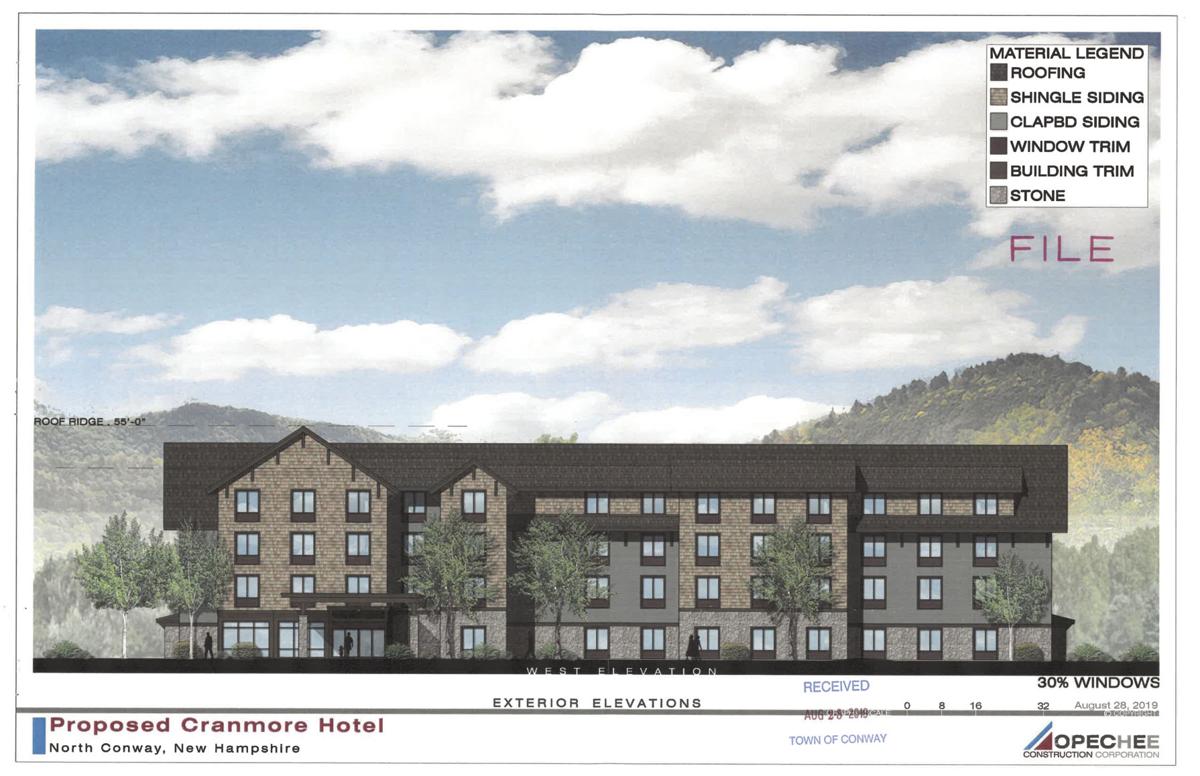 An elevation showing a side view of the proposed hotel at Cranmore Mountain Resort. (COURTESY HEB ENGINEERS) 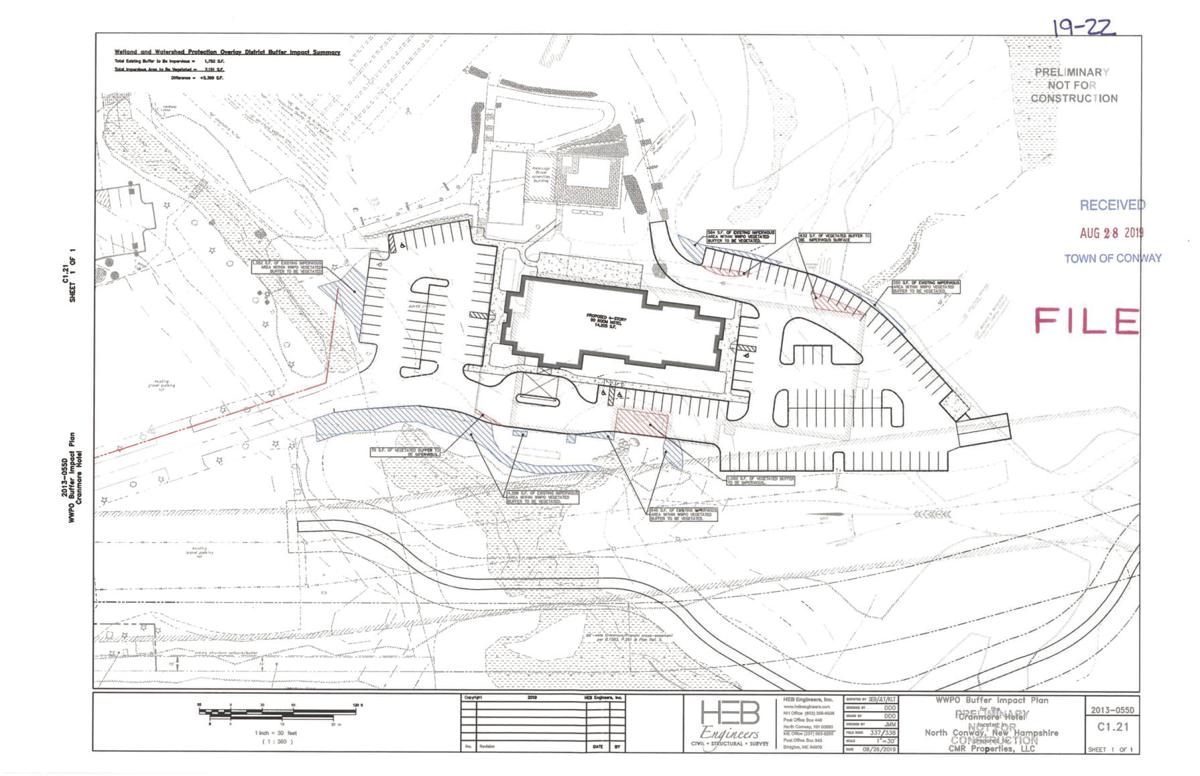 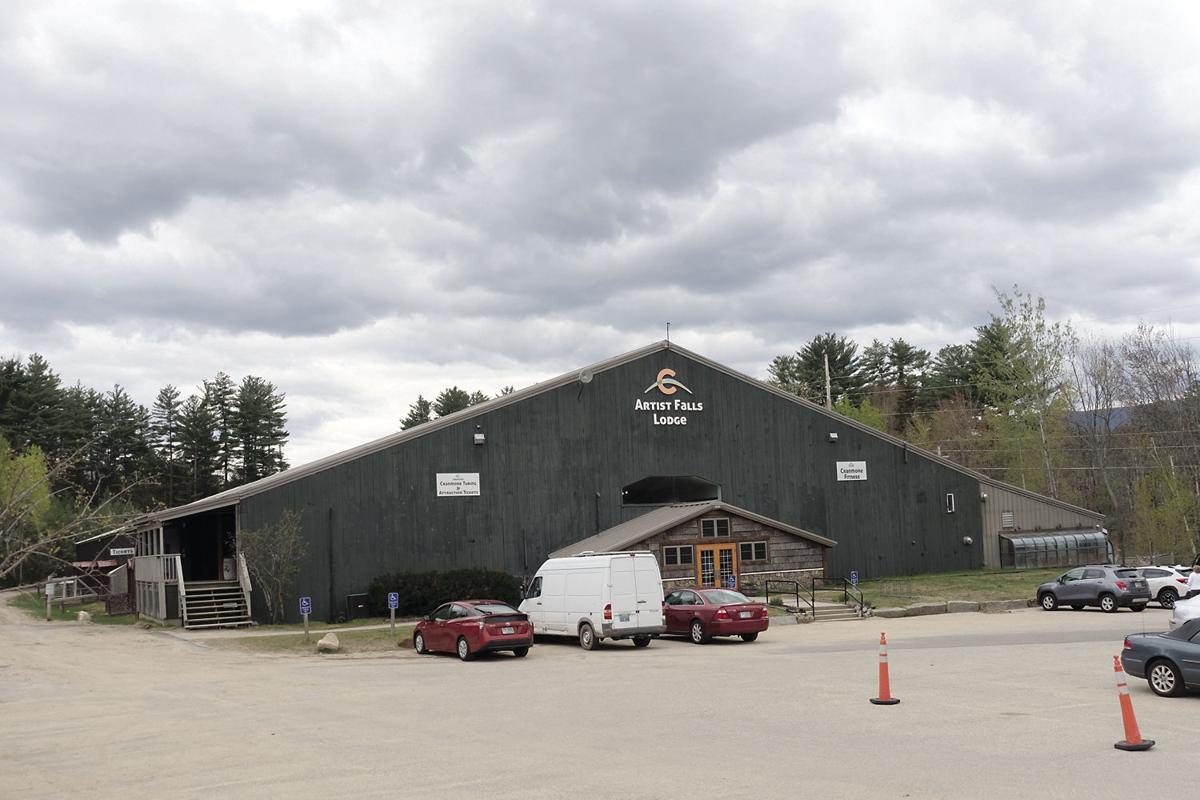 The exterior of Cranmore Fitness Center is seen May 16. Cranmore announced the fitness center will be closing operations in August. Plans to build a 90-room hotel on the site were filed with the zoning board Aug. 28. (JAMIE GEMMITI PHOTO)

An elevation showing a side view of the proposed hotel at Cranmore Mountain Resort. (COURTESY HEB ENGINEERS)

The exterior of Cranmore Fitness Center is seen May 16. Cranmore announced the fitness center will be closing operations in August. Plans to build a 90-room hotel on the site were filed with the zoning board Aug. 28. (JAMIE GEMMITI PHOTO)

"Notice is hereby given that a public hearing will be opened at 7:15 p.m. on Wednesday, September 18, 2019, at the Conway Town Office in Center Conway, NH to consider a SPECIAL EXCEPTION requested by CMR PROPERTIES, LLC in regards to §190-24.K.(6) to allow the construction of a resort hotel in the Recreational Resort District at 165 Skimobile Road, North Conway (PID 214-84.2)."

So said the agenda for the upcoming meeting of the Conway Zoning Board of Adjustment.

Ben Wilcox, president and general manager for Cranmore Mountain Resort, confirmed to the Sun on Monday that Cranmore is looking to build a hotel on the site of Cranmore Fitness at 165 Skimobile Road, which closed Aug. 30.

“Resort hotels are very common at ski resorts in New Hampshire and across the country,” said Wilcox. “Adding a resort hotel at Cranmore would be a natural fit and would round out the resort’s offerings.”

Becca Deschenes, Cranmore Mountain Resort's marketing director, confirmed that Cranmore had submitted plans on Aug. 28 to the ZBA but said they have requested a new date to go before the board.

“We were originally scheduled for this Wednesday’s meeting but will be presenting on Oct. 16th, where more information will be shared,” she said.

The agenda also included a request for a special exception to allow pavement in the wetland buffer at 165 Skimobile Road.

Interviewed in May after the fitness club’s closing was first announced, Wilcox was asked if plans for the club site might include a hotel. At the time, he said only that “we are exploring all options.”

According to plans submitted Aug. 28 by Cranmore officials and HEB Engineers of North Conway, envisioned is a four-story, 90-room hotel totaling 14,205 square feet. The aesthetics match that used at the new Kearsarge Brook condos built at the base of the South Slope.

The new hotel would be located near the start of the proposed Rec Path, a paved trail that will run from Cranmore to Walmart.

Following two years of analysis, Cranmore officials and owners, the Fairbank Group, determined it was not financially viable to upgrade the facility.

"Cranmore Fitness needs a new building and upgraded equipment, and we determined that closing the club for a year to build a new building and investing in state-of-the-art equipment would not financially make sense for the resort or its members,” Wilcox said back in May.

Cranmore donated most of its exercise equipment to CORE, a new non-profit that is expected to open a new fitness center on East Conway Road later this month.

A second non-profit, the North Conway Tennis Association, is renting the Cranmore indoor courts this winter.

If approved, the Cranmore hotel project would be part of an ongoing $50 million base redevelopment project that include the multi-phased Condominiums at Kearsarge Brook.